Most automotive paint protection products on the market might look good when they are first applied but the shine quickly wears off. Pomponazzi is supposed to be a far superior product. After 5 years of abuse, does it actually live up to expectations? Read our review to find out.

When I bought my first new car, I was conned by the dealership into paying some ridiculous amount of money for paint protection. It seemed like a good idea at the time but the reality was it was little better than an expensive coat of wax and it didn’t last very long at all. As far as I was concerned, these paint protection products were a waste of money.

Fast forward to 2015 when we purchased our new Toyota Landcruiser, we started reading about a new paint protection product called Pomponazzi. I have to admit to being more than a little sceptical. Then I started to see videos online of how this paint treatment is applied and just how effective it is at helping to keep the paintwork of your vehicle clean and in top condition. Given the Landcruiser was likely to be the last new car we would buy for a very long time, we were keen to keep it looking good for as long as possible.

So we spoke to Stewart Paternoster from Detailz (formally MOS Detailing). He is known around the industry as an expert in applying the Pomponazzi coating to a myriad of cars of varying age and use. When you talk to Stewart, you become completely assured he is not trying to sell you snake oil. He is very passionate about his work and he is very straight with you about what the product can and can’t do. We decided to go ahead and give our Landcruiser the full Pomponazzi treatment.

The process to apply the Pomponazzi coating is not a five-minute job by any stretch of the imagination. The vehicle may need cleaning as many as three times in-between the various stages of preparation. The level of detail the guys go to when preparing the surface borders on obsessive-compulsive behaviour. They carefully polish very small sections of the car at a time, inspecting each area and removing the smallest of imperfections. Only when they are completely satisfied the paint surface is perfectly restored do they apply the Pomponazzi coating itself.

And the result? Well, it is nothing short of amazing. Even on our car which, at the time, was only about a year old, it was immediately noticeable how much better it looked. The depth of the colour and shine had to be seen to be believed.

Since then, our Landcruiser has spent much of its life travelling around the country towing our caravan through the worst conditions imaginable. Full time living on the road means the vehicle has never been garaged and has been exposed to the elements all its life. We’ve driven through deserts, up to Cape York, 6 months in the tropical north during the monsoon, you name the conditions, this car has been exposed to them. As for care and maintenance, it’s been limited to numerous visits to car washes, the occasional hose down and not a lot else. There were a few scratches in the paintwork, some of them quite deep. It is fair to say the shine and gloss had well and truly worn off and the paintwork was showing signs of the abuse.

Now that we were back in Melbourne, we thought we would take the opportunity to give the Cruiser’s paintwork some much-needed rejuvenation. I contacted a Zac from Zero Gauge Customs who is a local agent for Detailz and booked the Cruiser in for a maintenance clean. We dropped the car at their facility where it spent the whole day. It was certainly going to be interesting to see how the paintwork came up after all these years.

When we returned to pick up the Cruiser, we could see it sitting in the car park waiting for us and immediately we noticed a difference. It literally looked like a new car. Up close it looked even more impressive. The guys had managed to restore the deep gloss and smooth mirror finish the car had when the Pomponazzi treatment was first applied. Most of the deep scratches had been removed to the point they were nearly invisible. It was a stunning result.

When I spoke to the guys about it, even they were amazed at how well the paint came up given the harsh life the car has had. The work required for the maintenance clean, while detailed, was certainly not extensive.

As good as it is, the Pomponazzi treatment can’t perform miracles. There were a few blemishes that could not be removed. One was a particularly bad mark caused by a bird dropping that had penetrated the clear coat and marked the colour paint underneath. This is entirely my fault as I didn’t clean it up as quickly as I should have. There was also extensive scratching behind the door handles that, while improved by the maintenance clean, were still visible.

As I mentioned earlier, the guys at Detailz are honest about what the product can and can’t do. It is not force field out of science fiction. Rather, it is a barrier that helps protect the paintwork from much of what the car is likely to experience in its lifetime. It won’t prevent damage resulting through your own stupidity or very excessive wear and tear. But it will give the paintwork on your pride and joy a fighting chance to continue to look good after years of exposure to the elements.

Now for the elephant in the room…..the cost.

There’s no hiding it or beating around the bush. The current retail price for a Pomponazzi treatment on a car the size of a 200 series Crusier is $2200 and the maintenance clean was $350. Now I wouldn’t blame anyone if the first thing that came to their mind was the image of a rough end of a pineapple and a certain orifice, but having witnessed first hand the work that goes into the initial process, and then to see the condition the paint after five years of abuse, I can assure you its worth every cent.

I know there will be many readers of this review thinking they could do just as good a job maintaining their paintwork with nothing more than regular cleaning and polishing. If that’s your opinion, then I say good on you. I know myself, I couldn’t do it. I’ve tried with the cars I’ve owned in the past and frankly, despite all the effort I’ve put into maintaining them, they have never looked as good as our Cruiser does today and none of them would have had anywhere near the harsh life the Crusier has had. What’s more, living full time on the road means we can’t look after the car’s exterior as well as we could if we were living at home.

As far as I’m concerned, the Pomponazzi paint protection has worked out to be a good investment.

More reading: The Tow King. Why they bought a Toyota LandCruiser! 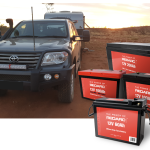 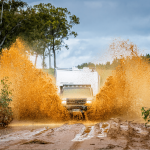