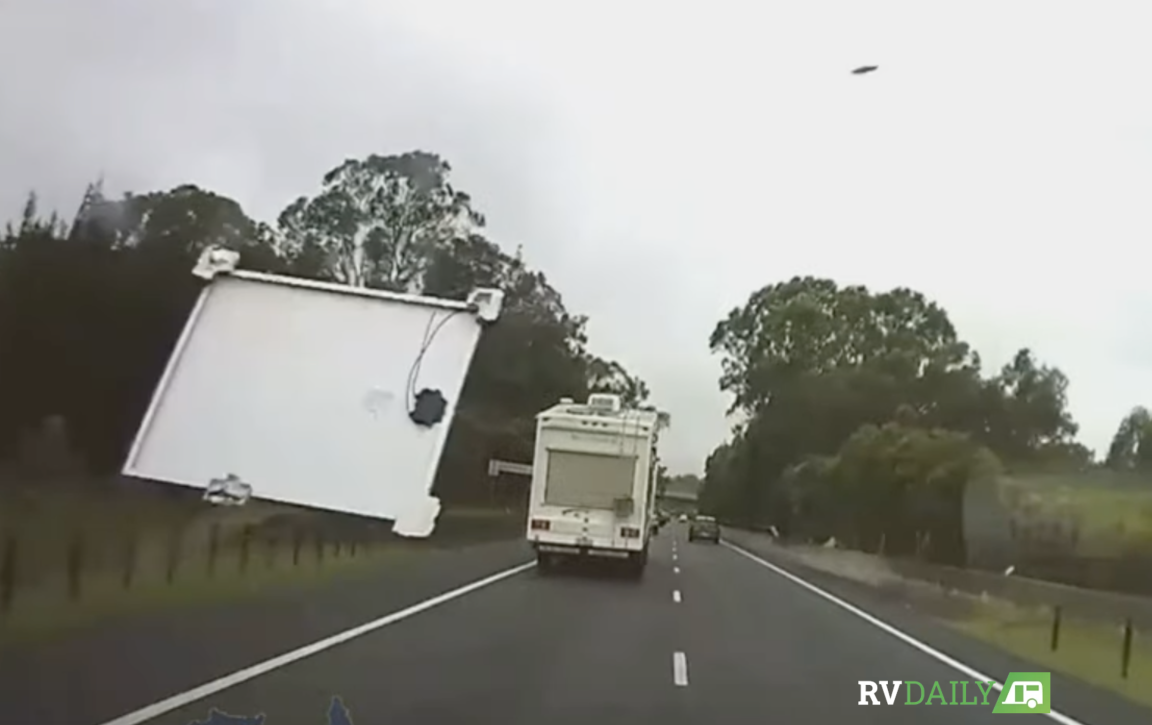 Forget solar storms, solar flares, or solar radiation. Flying solar panels are the dangerous new threat that could be literally just sitting on the roof of your caravan or motorhome right now.

On 22nd December last year, extraordinary video footage was posted on the AussieCams YouTube channel showing a large solar panel becoming dislodged from the roof of what appears to be a 5th wheel caravan. The solar panel sails through the air towards the car following the 5th wheeler. The driver of the car takes evasive action to avoid the panel hitting him and he appears to collide with a barrier as a result. The driver of the 5th wheeler is seemingly unaware of the near-disaster unfolding behind him and continues to dive on.

At any other time, this might be considered a rare and freak incident, but the reality is somewhat different.

Three years ago, American YouTuber, “Nomatic Fanatic“, posted a similar video on his YouTube channel. The footage was captured by a security camera inside his motorhome that just happened to be running at the time. In the video, he described driving through unusually strong winds when the incident happened. The screws securing the panel were torn from the roof of the motorhome by the sheer force of the wind lifting the panel from underneath. He was visibly shaken by the incident realising the potential danger it posed to any vehicles that may have been following him.

In both of these incidents, no one was hurt. Unfortunately, the same can’t be said about the third such incident that occurred in October last year. According to an ABC News report, police believe that the multi-vehicle crash occurred after one of the vehicles lost control trying to avoid a solar panel that dislodged from the roof of a caravan. That incident, which happening near Ross in Tasmania’s Midlands, tragically took the lives of three people including one child, and put four others in hospital.

Police said the driver of the vehicle towing the caravan was unaware of the crash and that he and his family were understandably distraught over what had occured.

The problem of insecure or improperly mounted rooftop solar panels is one that is widely known throughout the industry. We spoke to Chris Emmerson of CJE Caravan Repairs in Packenham, Victoria, and asked him what he knows of the issue.

“We haven’t really heard of too many incidents of roof-mounted solar panels falling while a vehicle is moving along but over the years we’ve seen many cases where customers have brought in their caravan or motorhome to us and we’ve found solar panels literally hanging on by a thread.”

“It is sheer luck we don’t see this happening more often than it does,” he said.

According to Chris, the problem seems to be most prevalent on second-hand RVs where owners have installed rooftop solar panels themselves.

“We get three or four phone calls each week from do-it-yourself owners wanting to install the panels themselves and wanting to know what products we use to glue solar panels to RV roofs.”

“When you think about how many owners are potentially doing these solar installations themselves with little or no knowledge of the correct process, and you see the videos of panels flying off caravans, it is frightening.”

Chris told RV Daily that it is very important to use both a mechanical and a chemical form of connection to secure a solar panel to the roof of an RV. “In layman’s terms, they must be both screwed and glued to the roof.”

“The glue must be a high-quality product such as a brand name Sikaflex. Surface preparation is also very important and involves a thorough cleaning and, in many cases, priming with a bonding or adhesion promoter. The thickness of the adhesive between the bonded surfaces as well as the temperature at which the adhesive is cured all play crucial parts in the process. You really do have to know what you’re doing.”

Chris also told us that the problem extends beyond just inexperienced DIYers. Many caravan repairers and installers are also responsible for some dodgy installations.

“We had a case a few years ago where we installed a solar panel on a customer’s Toyota motorhome. Some months later, the customer went to another installer to have a roof hatch fitted. That installer moved the solar panel to make room for the hatch and simply pop-riveted it back onto the roof.  The panel was blown off the roof by a gust of wind and it smashed one of the motorhome’s windows. After that incident, the customer come back to us claiming we hadn’t installed the panel properly. We were able to show the customer how the other installer moved the panel to make room for the hatch. The panel had been completed moved from the original spot and not a single bit of glue was used to reattach it to the roof.”

Chris said the main problem is there are no regulations or standards in the caravan industry requiring aftermarket repairs or modifications to be performed by qualified auto electricians or motor mechanics. “You wouldn’t let an unqualified person fix electrical items in your car? Why then let them modify your expensive caravan or motorhome? As a consumer, you should be asking if the installer or repairer is licensed and/or qualified to do the work required.”

Chris had one last piece of advice.

“Every caravan and motorhome owner should check their rooftop solar panels to ensure they are securely fitted prior to heading off on holidays.” This would seem to be good advice particularly if you want to avoid being the star of another YouTube video. 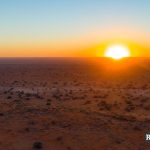 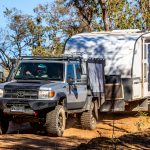