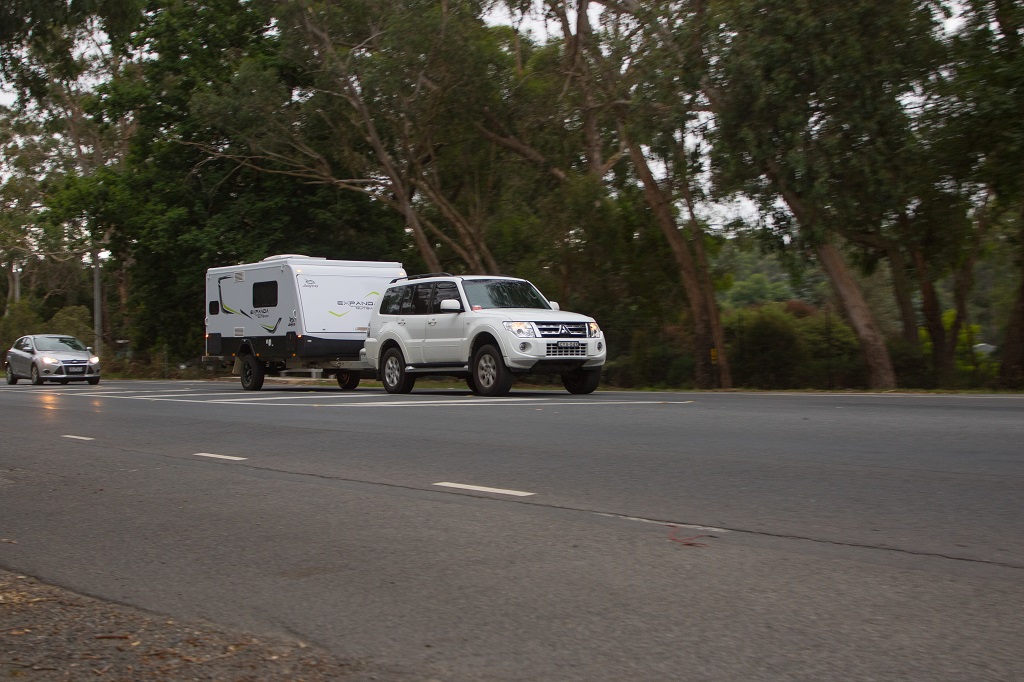 If you tow and you’re reading this, chances are you have a heavy trailer which has electric brakes that can be operated independently of the tow car. While the law says trailers over a GTM of 2000kg need independent brakes, it’s a very good idea to run them on lighter trailers too. The GTM (Gross Trailer Mass) is the weight of the trailer on the wheels, which is the total trailer weight with towball mass subtracted.

In practice, independent brakes mean your towcar needs an electric brake controller, not just a towbar and mechanical overrun brakes. Wiring a brake controller into your car is an easy enough job for an auto electrician, and within the skills of many amateur mechanics, although modern cars require increasing care with any additions or changes to the electrics. Most users tow just fine with a wired-in controller, but there are occasions when it’d be nice to tow without needing one. For example, if you want to lend your trailer to friends who have a towbar but no brake controller fitted, or you have use of a temporary vehicle to tow your trailer, or if you’re a trailer fleet operator.

One solution could be a wireless brake controller, and we’ve been testing one from Elecbrakes. It’s pretty simple, you first mount the Elecbrakes controller to the trailer, either bolting it in or maybe just cable-tying. Elecbrakes even supply a drilling template. The location or orientation of the controller isn’t particularly important. Still, it shouldn’t be in a toolbox and must be within range of the Elecbrakes remote or phone app used to change settings and manually operate the brakes. I tested the range at over 15m. 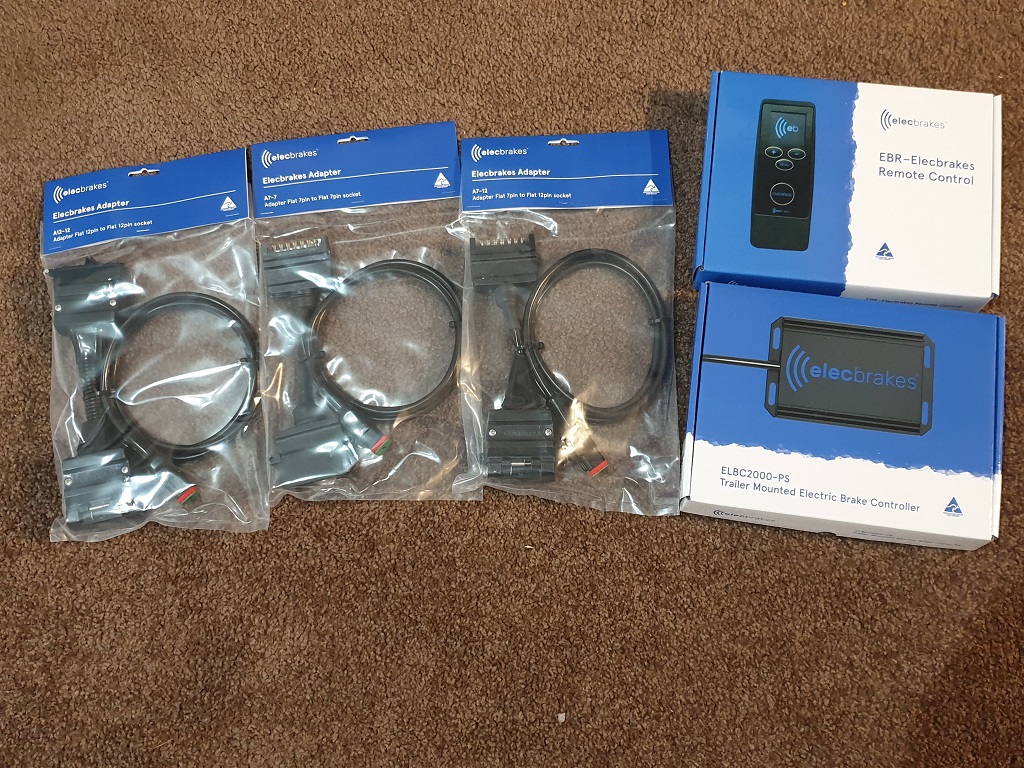 Then switch on the engine, and turn your headlights on low beam (not sidelights or the auto setting) so the controller has power. Finally, you control the brakes via an app on a phone (Android or Apple), or a dedicated remote control unit. The app or remote detects the controller, connects over Bluetooth, and you’re away!

Total set-up time is about three minutes, if that, if you’re using the plug-n-play adapter which costs $70. The manuals are very well written and presented in a high-quality booklet, and indeed nothing about Elecbrakes seems cheap or nasty, which given the job it does, is a good sign. In practice, there are two things you need to do with any brake controller. First is set it up so the proportion of braking force set to the trailer wheels is appropriate for the trailer and load. The heavier the trailer, the more braking force you need, and the type of tow vehicle makes a difference too. Second is to be able to apply the trailer brakes independently of the towcar, which is what you’ll need to do should you encounter trailer sway, and you need to do that immediately, no messing around.

The Elecbrakes controller braking force is set by the remote or app, and once set, stays set, so if connectivity is lost, the controller will brake at the force last set. It also means you can use the app to set the braking force parameters, then use the remote to operate things, which is handy as I find it easier to set up on the app. You can have up to five sets of settings called Programs, for example, five trailers, or fewer trailers with different loads on, or for different terrains. I have oneProgram for my car trailer unloaded, and another with a car on it. Each Program has four settings:

Forward, for speeds over 50km/h,

Minimum for speeds under 50,

Override for when you when manually operate the trailer brakes instead of having them come on when you press the vehicle’s brake pedal. To do that, you press a button on the remote or app. On the remote, the harder you press the button, the greater the braking force.

When towing, you do need to remember to drive with the headlights on for power, otherwise the controller will lose contact. The remote will beep, and the app display changes – I have my phone on permanent mute, so there’s no sound on that. Once you’ve selected your Program, it’s set and forget, except when you want to change force which you do by selecting a different Program.

WHAT ARE THE QUESTIONS?

The big concern when towing a trailer is always operating the brakes quickly so you can deal with trailer sway because when you feel it happening, every nanosecond’s delay is one step closer to disaster.

When I first looked at Elecbrakes back in mid-2018 this was my first and major worry, along with needing to touch your phone when driving. You could, and should in my view, use a dedicated phone if you want to use Elecbrakes app so you’ve got an instant ability to apply the brakes, without needing to swipe your way to the app first. I also suspect but cannot confirm that using a phone dedicated to Elecbrakes might not be seen as “using your phone when driving”. However, I’d recommend the remote over the app, as it’s simpler and easier. Although it has a battery with a 4-5 hour claimed life, the remote should be permanently plugged in, but that’s no hardship in a vehicle using the supplied USB cable and 12V adaptor. Even if you have the remote, you should use the app regularly as Elecbrakes plans to update the firmware on the controller, and that’s done with the app. This means you’re buying into a system which is actively being developed for the future. As I write this, Elecbrakes tells me that it is just about to release a night mode update for the app and some cosmetic changes for usability.

One other advantage of the app is that it gives you interesting statistics, and real-time information such as voltages out of your tow car electrics, and even the number of times the brakes have been applied [okay, you’ve reached peak nerd now – Ed].

I asked on my Facebook page if anyone had used the Elecbrakes system, and quite a few readers responded positively with tales of their travels. Nobody seemed to have complaints, and Elecbrakes is doing well, selling into markets such as the caravan rental industry that values the system because it means their customers just need a towbar, not a brake controller.

So far, I’ve not used the system for tens of thousands of kilometres, but it works as advertised. The major improvement I’d want is to make switching programs easier. With a conventional controller you just twiddle a dial to set your braking force, it’s extremely quick and easy, and I change mine all the time, for example when it’s raining, down steep hills, on dirt and with loads. With Elecbrakes, you have to press buttons or swipe, which takes a lot longer and for me that’s not ideal. However, one Elecbrakes advantage is that you are going to known presets, whereas if you twiddle a dial you won’t necessarily get back to exactly the setting you had before. 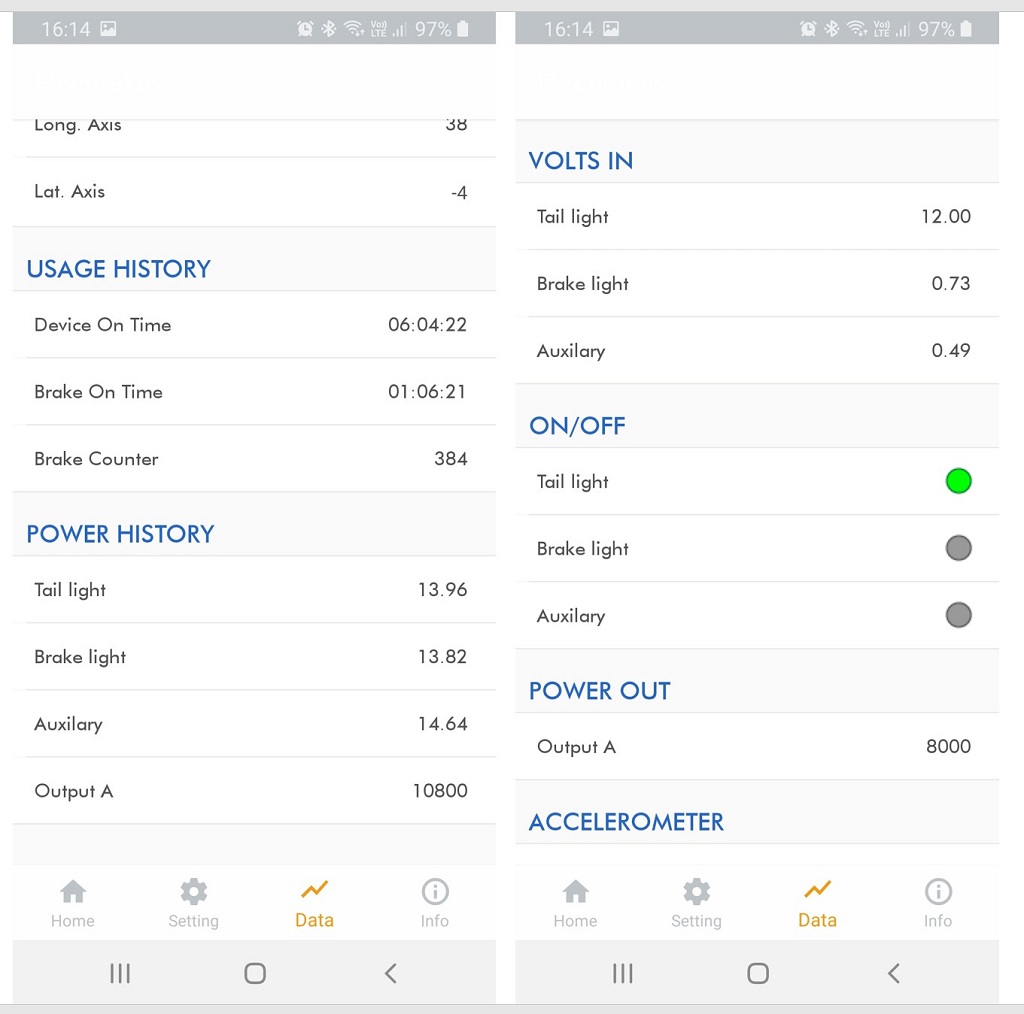 IF I HAD TO BE PICKY?

Other improvement points are more niggles and relate to the user interface. I’d prefer the remote to use the newer USB-C cable rather than Mini-USB, and the charge point to be at the bottom so it’d be easier to mount vertically on a dash. I think the app itself could use a little user interface makeover.

For example, changing the appearance of the brake override not just the colour, and rather than just numbers for forward response, make it an obvious scale so you can see where you are from max to min. A single summary screen of the different programs with settings would be nice.

The difference between “Forward” and “Minimum” isn’t obvious either, and there’s plenty of screen space on the app to explain.

On the remote, I’d change the style of numerals so it’s not the same for the Program as the setting, just a little visual differentiator.

However, the good thing about an app is that it can be updated, and it will be. I also would like at least 10 Programs given I have for example a car trailer, which can run unloaded, and loaded up to 2800kg, and can be pulled by at least two different vehicles, for optimal towing I’d need six Programs.

Interestingly, you can hand someone the remote or the app, and they can apply the brake from outside the vehicle, for example, if you’re reversing. That’s a useful safety aspect, although it shouldn’t be relied upon. And if you own multiple trailers, then you could easily swap the Elecbrakes unit from trailer to trailer. Thinking further ahead, perhaps future versions could incorporate cameras, help detect trailer sway … but that’s just me speculating. When you have a good base of technology like this, there’s a lot of possibilities.

Elecbrakes has an obvious market in the rental industry, but is it an option for recreational users? If you already have a wired brake controller, I don’t see much reason to change over, at least until the system delivers enough functions to tempt people across. If you don’t have a wired controller, then it’s definitely worth considering as it’s a buy-once item, no need to buy another brake controller when you change vehicles. Or, if you lend your trailer to friends it’d make life easier too.

My unit will be used on trailers we have on test, as I no longer need to nag carmaker PR people to install brake controllers, which is good for them and me, so you’ll see updates here from time to time. And now my friends can more easily borrow my trailers, so Elecbrakes has made my life that little bit easier.

RRP $649 for the controller, which can be wired direct into your trailer’s electrics. The plug-n-play adapter is another $70, and you can choose your plugs, for example 7-pin to 12-pin. Additional adapters are $80. The app is free on Android and Apple, and the remote is $169.