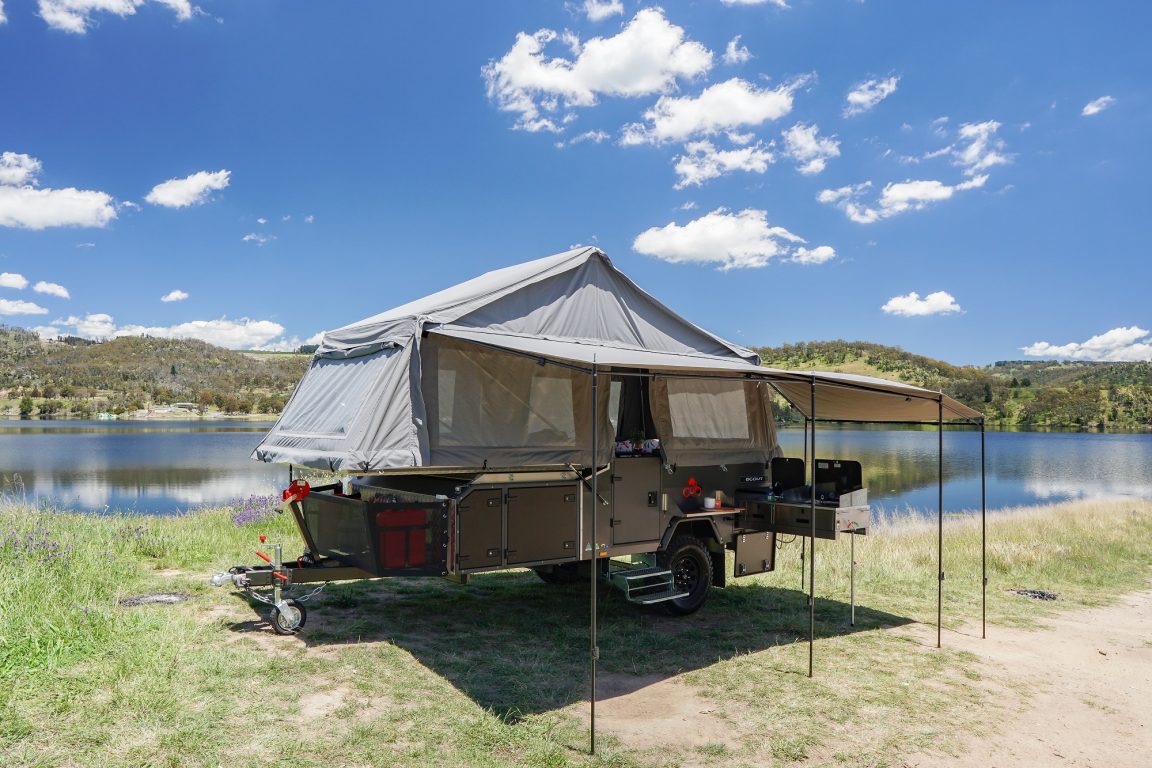 There’s much to like about Cub’s new Scout forward-fold lightweight camper-trailer and you probably don’t need a new vehicle to tow it.

The Cub brand is one synonymous with Australian camper-trailers and Australian camping. Cub has been in the scene here for 52 years, and there’s a showroom full of models to cater to most camper’s intentions. So after some intense market research and subsequent development, Cub is now introducing its long-standing heritage to camping newcomers with the lightweight and, dare I say it, cheap, Cub Scout. However, cheap relates only to the price. The quality construction is excellent, and even more so when compared to its overseas-sourced competition. It’s no secret the Cub is passionate about Australian manufacturing, with its now-retired founder Roger Fagan also the president of the Australian Manufactured Camper Trailer Guild. With the promise that everything materially engineered into the campers is sourced here; there’s not much you can do about a top-notch appliance having overseas input, but if it’s built into the camper, it’s made here.

The Scout is a forward-fold camper. It takes its lead in design terms from Cub’s popular Frontier model. While we mentioned newcomers to the scene at the top, it’s not just an entry-level camper. The other attractive part, and perfectly timed launch with local camping enjoying a boost from holiday-at-home Aussies, is that a large range of SUVs can tow it. So with the Scout, if you want to go camping with your new camper – you likely don’t need a new car. It’s also easily maneuverable by hand if you have a tight spot in which to park it.

So let’s look at those all-important numbers: The Scout is 3.68m in camper body and has an overall length, including the drawbar of 5.58m (it’s the same with the camper open). Now, the weights to check against your vehicle’s handbook are a Tare of 1113kg and an ATM of 1500kg – with a ballweight of just 105kg. It’s not often we get to say that. It’s one of the lightest forward-fold camper-trailers on the market.

These lighter numbers don’t equate to lightweight use, however, and while Cub doesn’t promote the Scout as a hardcore off-roader, the Scout can take to life in the bush with ease. Even with compact dimensions on paper and a potential sleeping capacity of four, the camper is easily set up by one person – as Cub’s Matt Kennelly proved I could. 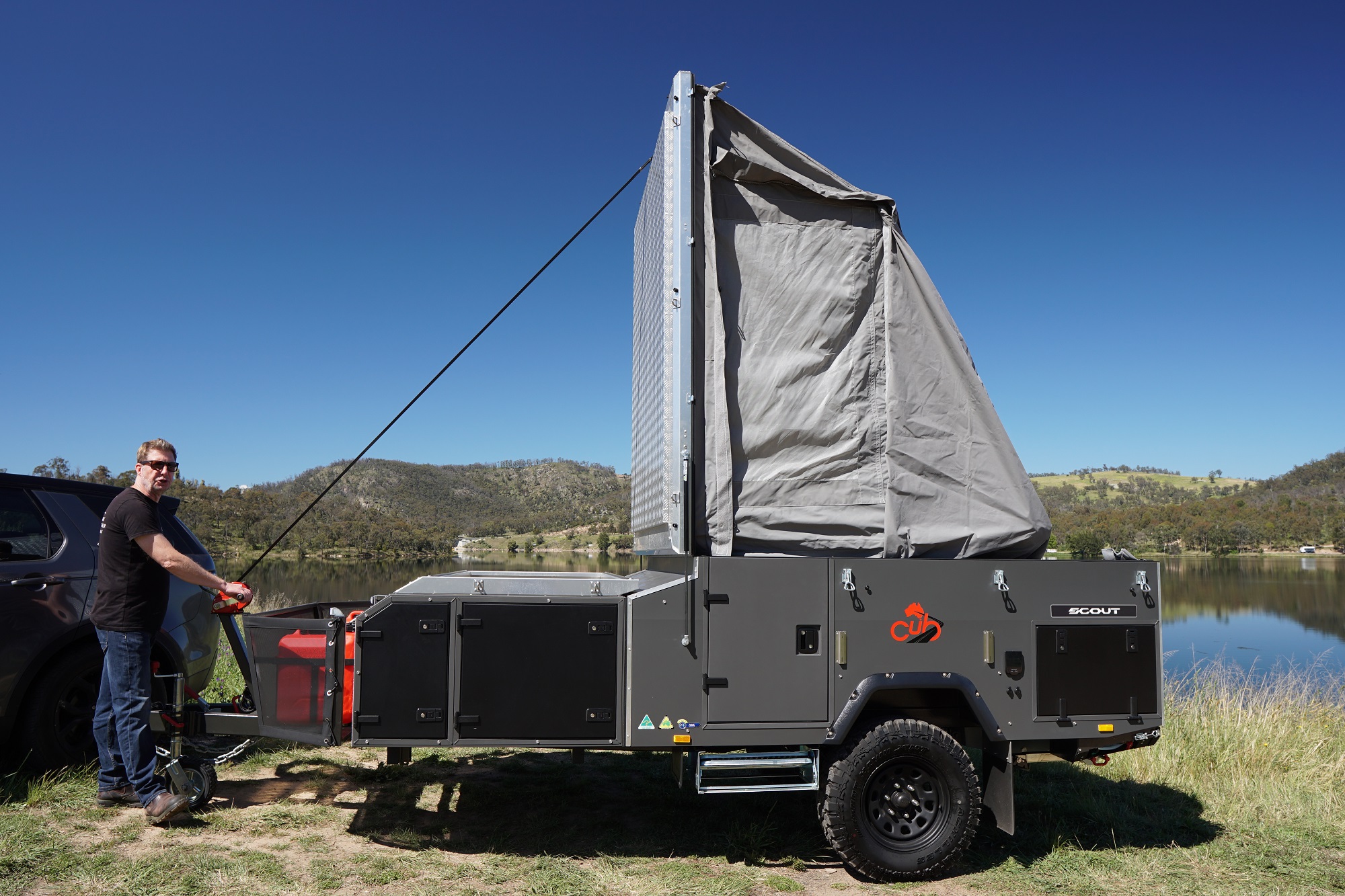 Before we discuss the residential quarters, the components that support your journey receive some attention. Underpinning everything is a galvanised Australian steel chassis, with the drawbar in 100 x 50 x 4mm dimensions. On either end of the 50mm square axle is a 10-inch electric brake to arrest the 15-inch steel wheels and mud-terrain tyres. The eight-leaf suspension is also AL-KO with a single ROX shock on both sides. The spare wheel is a rear-mount, but you can opt for underslung, or both as a cost option. With off-road in mind, there are two 2400kg-rated recovery hooks at the rear plus two standard drop-down stabiliser legs – two more for the front are optional. 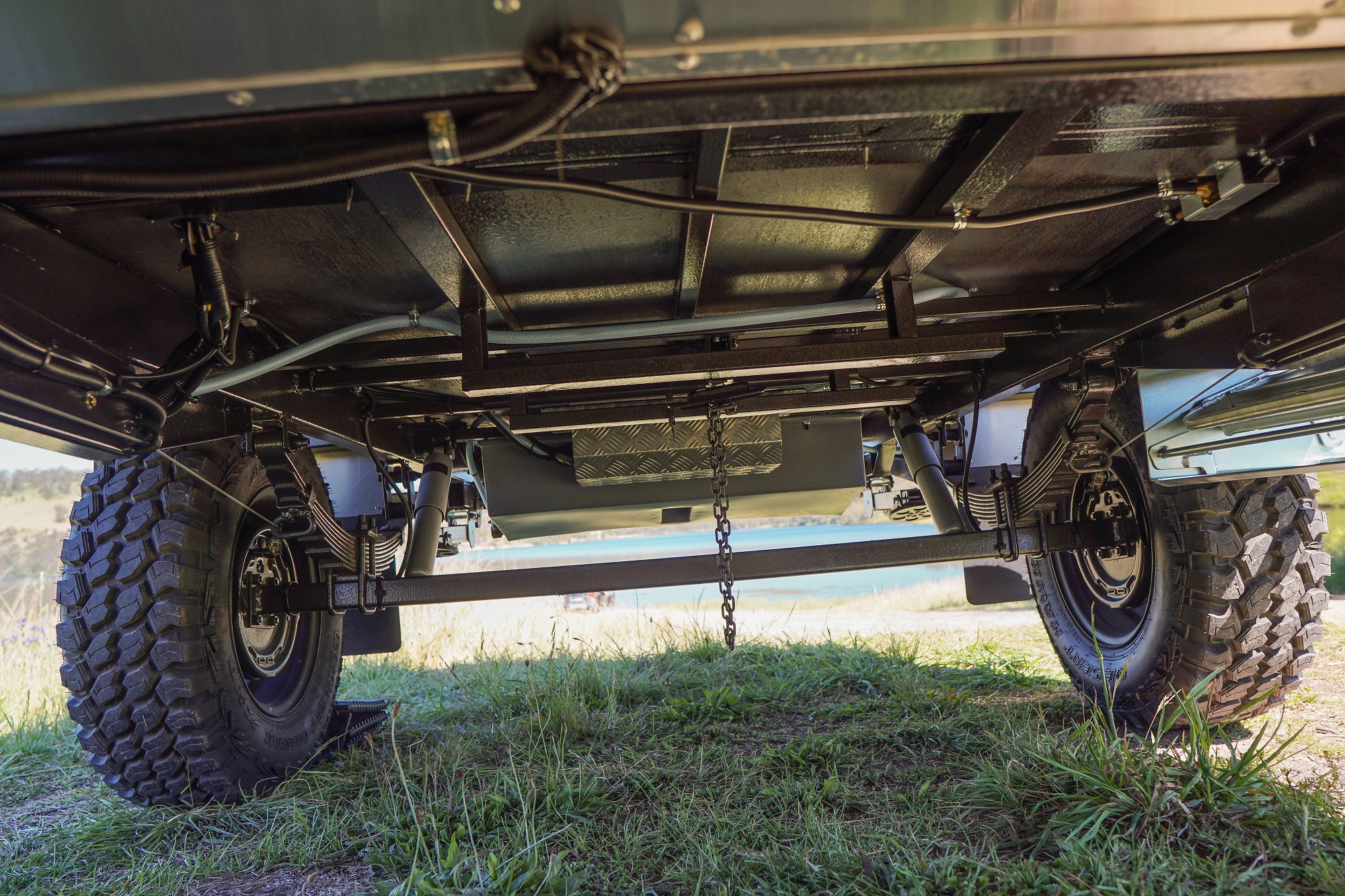 I mentioned solo operation – so what’s involved? Not a great deal to get you inside and undercover. Open the latches around the body, then use the front-mounted winch to wind the roof up and over towards you. The winch is almost one-finger light to operate. As the roof comes up, you’re reminded of all the storage area there is on the top two surfaces – complete with tie-down points. As the tent section opens out entirely, it’s just a matter of pushing the roof bar at the rear into place – it’s gas-strut assisted – and then secure the canvas to the body with the elastic tie-downs. Matt told me that there’s no need to adjust any of the bars within the tent section as Cub does that for you – pre-delivery. 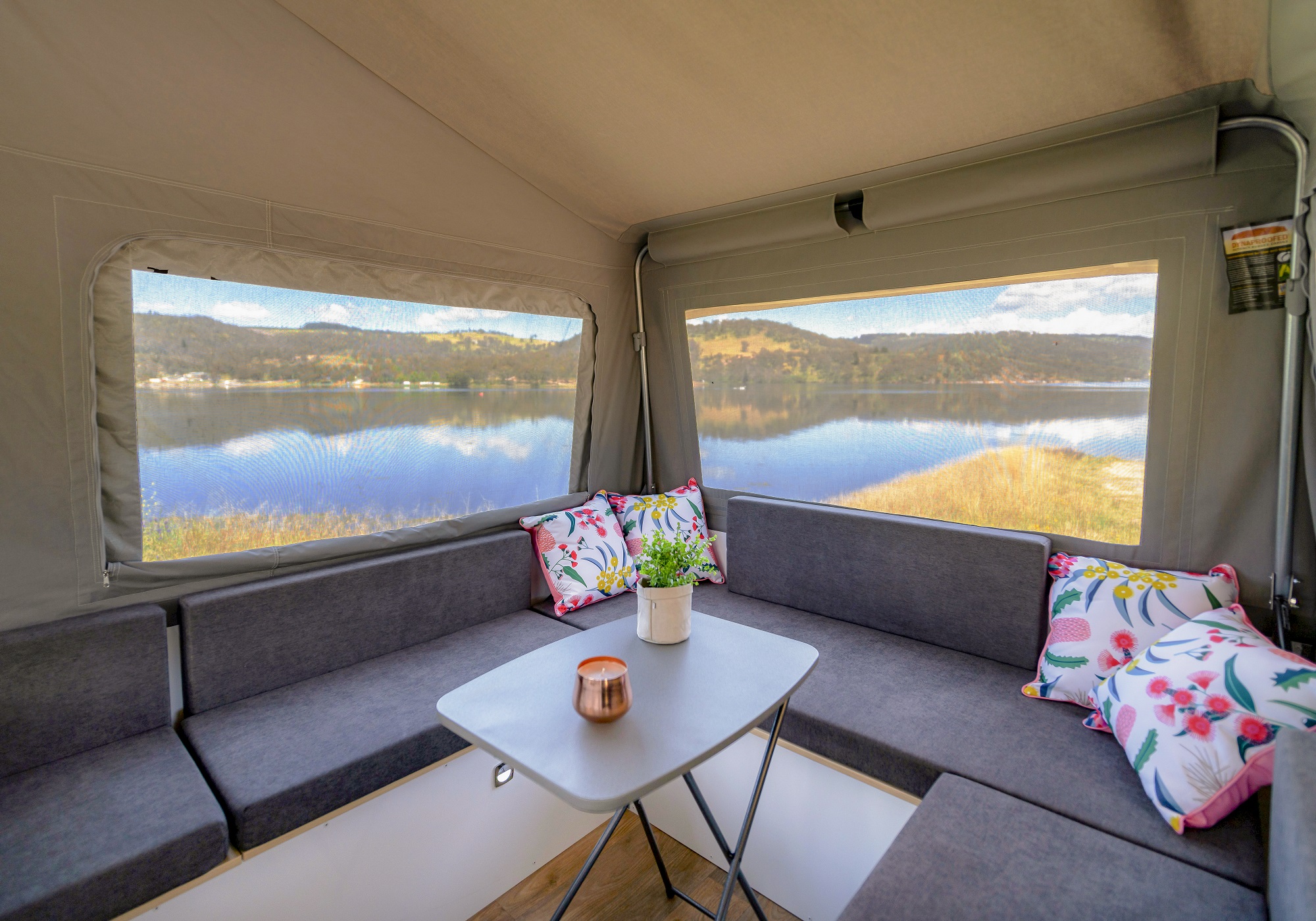 Open the half-height camper door, climb the slide-out steps, and you’re inside the generous living space. What’s noticeable immediately is the fact that most walls are, in fact, windows. Seven in total to provide light and ventilation. The standard openings are covered with midge-proof fly-screen which you need to zip up in a storm, although you can specify a vinyl screen for the windows over the bed area so you can retain outward vision in wet weather.

The tent section is made of Australian-made Wax Converters Dynaproof canvas, and an Extended Ezy Awning awning is supplied as standard. The neat, black clip-together poles for the awning are easily stowed in the tunnel boot. Cub offers options for annexes and walls to suit. The sleeping area comprises a bed – self-explanatory, in queen-size medium density foam mattress with the only option twin reading lamps and two USB charging points as part of the Power Pack which also gives you a 240V Projecta battery charger. Under the bed, facing the living area, you will find six carpet-lined storage pods that are covered with a mesh screen to retain the contents nicely. A box step aids the trip up to bed if you need one.

The lounge/dining area could comfortably accommodate five or six people on well-cushioned fabric seating that lifts over the wheel arches to reveal storage provision – right over the axles. The timber lids rise on gas struts, too, which is a nice touch. You can choose either a removable folding table or a pedestal table that then allows the proper conversion to a sleeping area for the extra two bods we mentioned at the beginning.

As generous as the natural lighting is, LEDs are on duty via floor lighting, a large circular entry light, that also offers a red night light and the overhead dual-colour strip that uses orange to deter the flying biters.

The Scout’s power source is a 105 AH AGM battery with a standard Projecta 12V charger, an Anderson plug to set up a solar panel input, while the battery chamber has space to slot in a second battery if you wish. Along with the master power control and overload switch, fuse box and charger control units there’s a gauge to read the levels in your standard 100-litre water tank.

Water is pumped over to the Dometic kitchen unit that’s a joyous execution in stainless steel. Black glass lids cover the sink and the three-burner cooker, but the surfaces in mark-resistant dimpled metal atop twin drawers exudes quality. You can drop in the windshield to protect your gas burners, for which the bayonet supply point is housed in a neat little metal surround on the camper’s rear wall. Water is alongside via a clip in hose connector, and there’s even a blank outlet to option in a second gas connection to run a portable barbecue. If you wish to use a shower tent, then you can specify a similar gas/water outlet on the offside external wall too, and maybe select the Smarttek hot water and shower kit option.

In terms of external storage, the Scout offers a large bin on the offside, adjacent to a smaller hatch that has a lower shelf and runs through the tunnel to the other side above. The drawbar comes standard with a galvanised stone guard to protect the camper’s leading-edge, with cradles for jerrycans and the single 4kg gas bottle (you can option another). The rear utility bar has a spare wheel stored on a bracket as standard and has options for a bike rack receiver bracket or additional jerrycan holders.

Over on the nearside, the tunnel boot hatch has a lower set and huge 1400mm slide-out pantry drawer, next to the fridge slide that’s capable of handling large fridges. All the hatches have fantastic seals and catches that seem more than adequate for keeping the internals water and dust-free. 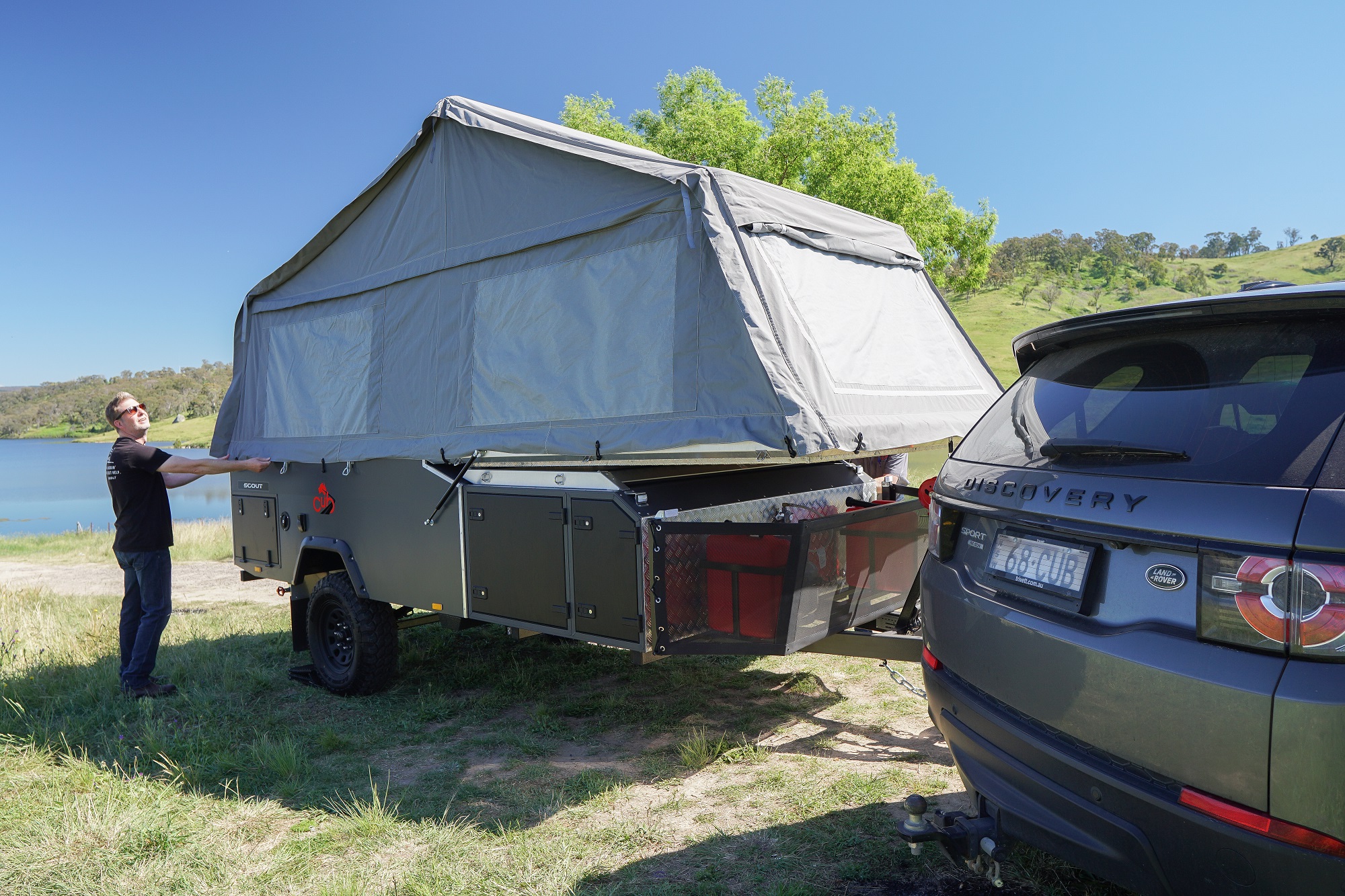 In a review of a model named the Cub Scout, it would be remiss of me not mentioning being prepared. The official Cub Scout motto, no less. Well, this Cub Scout is well prepared. I couldn’t fault the execution. The materials and the design are, as I said at the outset, strong and well-built. The standard inclusions for the sub-30K price are considered and provide a ready-to-go package that’s ideal for a quick getaway. Given the market is at the moment receiving interest from many parties keen to explore the camping lifestyle for the first time, and not wishing to commit a fortune or buy an unknown quantity of a second-hand buy, Cub may have a winner on its hands. The huge bonus is the broad range of tow vehicle options given the 1500kg ATM and 105kg ball weight. The Scout will also appeal to caravanning downsizers or those with a budget for a smaller, easy to store unit and who don’t camp that often. Or might begin to, being prepared and all. 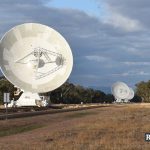 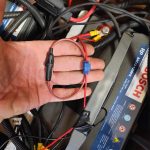