If you live in the coastal tropics you may share your garden with these beauties.
They bark or mew depending on what’s happening, we’ll leave you to discover which

Females can grow up to 14cm in length whereas the male frogs are smaller in size (reaching only 10cm) enabling easy identification of the species. In addition to this, as the name suggests, the giant tree frog has a distinctive white strip on the lower jaw. The frog can range from bright green to a pale brown; and during mating season, the white underside on the male frogs can change to a light pink or salmon colour. The mating call of the white lipped tree frog has a loud bark-like sound used to attract the female. The mating season is during spring and summer, normally after rain.

The white lipped tree frog lives on a diet of insects and arthropods (and occasionally spiders as well), with the lifespan reaching up to and often over 10 years. 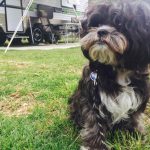 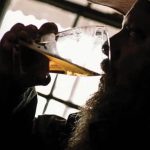