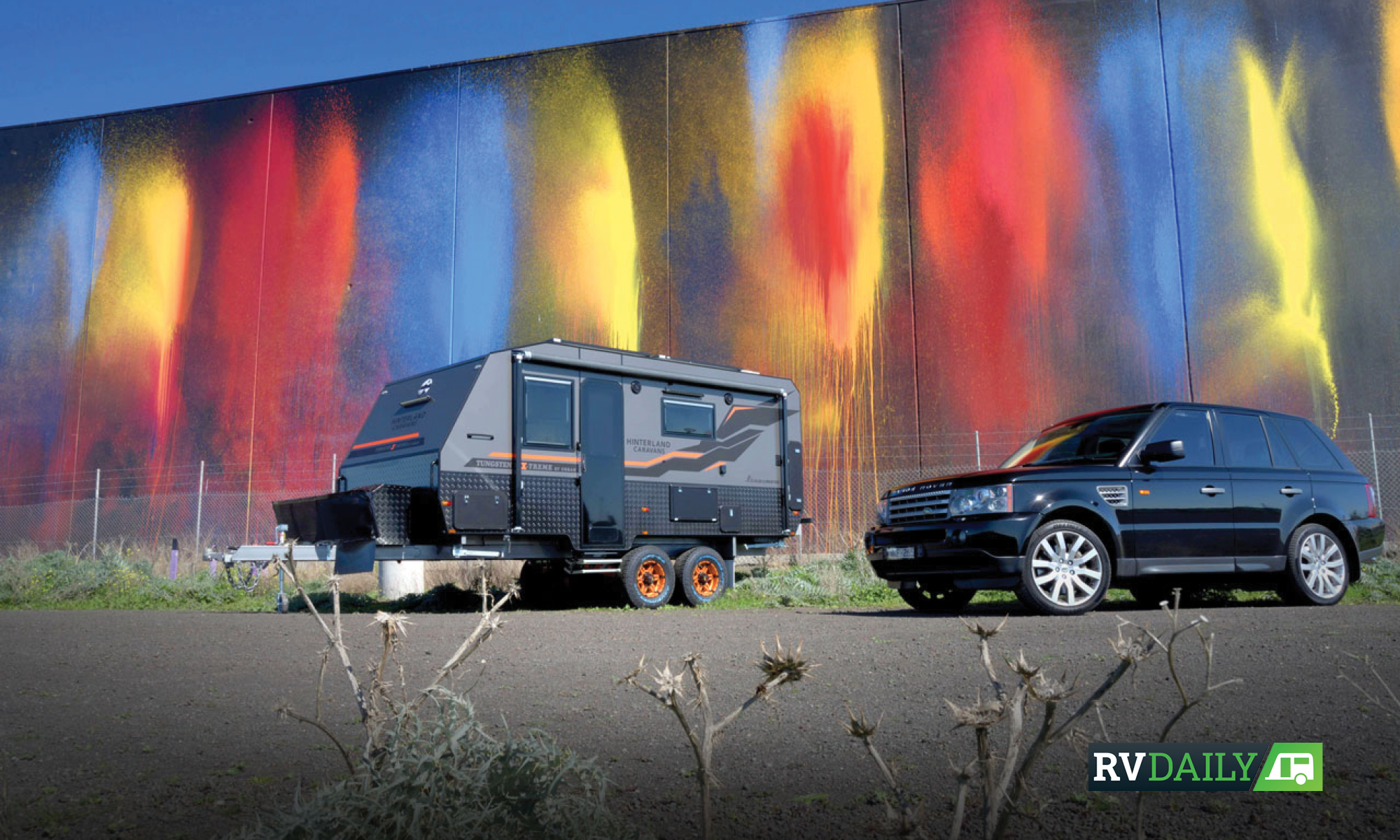 Urban Caravans is one of the few manufacturers that TIG welds its aluminium frames and builds them tough for off-road work. We look at the Urban Tungsten X-Treme

Steve Trajcevski runs Urban Caravans and has a passion for building quality vans designed to last, on and off-road. This passion started when Steve joined the family business as a young 16yo. Steve stated that his father and uncles owned Opal Caravans and changed the name to Regal Caravans as suggested by their dealers at the time as it suited the quality of the vans better than Opal did as a name.

Steve was sent to do an upholstery and furniture-making apprenticeship so that he could build van furniture and do some top-notch upholstery properly. That worked well. Steve and his dad were then building stainless-steel-framed vans and again, Steve was sent off to become a qualified welder, specialising in TIG (tungsten inert gas) welding.

For more of the fascinating history behind Steve’s family in caravans check out the video, suffice to say that the family went big then in the “recession we had to have!” went bust; a torrid time for all concerned.

At the start of 2019, Steve, his wife Mariana, and brother-in-law Vic moved into a much larger factory aiming to build a range for Hinterland Caravans in Queensland to sell under the Urban banner. The projected build rate is only three to four a week to maintain strict quality control.

There are three Urban models: Tungsten Tuff, Tungsten X-Terrain and the Tungsten X-Treme. All can be modified and as you’ll read below, our review model has been optioned up hugely, hence the price tag of just under$100k. 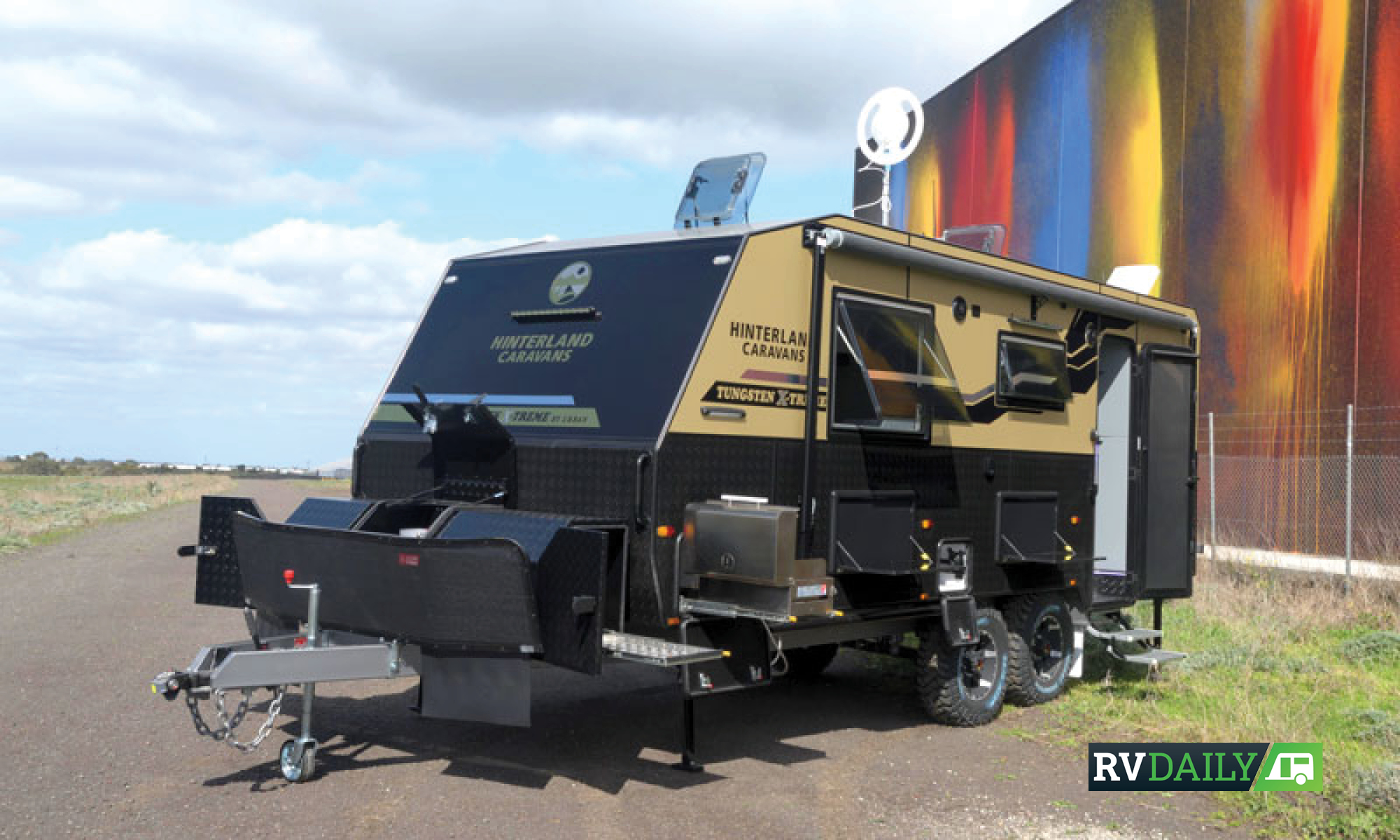 The Urban is built on an ARV Supagal 150mm chassis with a 150mm raiser to create a flat floor. The floorline on the review model was straight (as ordered) but the norm is to have a raked back end for extra ground clearance. The big-ticket item on the chassis is the ARV 3.7-tonne airbag suspension to each axle that includes Pedders Trak Ryder shocks. These airbags are operated via remote control and it was amazing how fast airing up and down was. Mechanicals off the chassis include 12-inch electric brakes, an AL-KO ESC system and 16-inch Devil 666 alloy rims shod with BAJA MTZ 265/75R16 tyres.

Underneath the chassis are twin, shielded, 95-litre water tanks plus a 100-litre grey water tank. There’s some neat plumbing and the usual drop-down stabilising legs. Sliders are fitted to protect the body, and the two front ones had poor-quality welding straight from the chassis manufacturer. Steve was very unhappy when I pointed that out and it was being sorted once we got back to the factory.

Upfront, on the extended A-frame is a large toolbox with three compartments. The middle compartment houses twin 9kg gas bottles in a well-protected spot. The two outer boxes have slides for a generator or toolbox or similar. There’s a great removable stone guard, AL-KO jockey wheel, a tap, and a Cruisemaster DO35 off-road coupling.

Extras off the chassis include a four-arm rear bumper with two spares, a numberplate mount, twin aluminium drop-down step and a bayonet gas fitting for the owner-supplied barbecue.

The frame is fully aluminium, TIG welded and bolted with locknuts. The gold-coloured fibreglass body covers the van everywhere except where the black chequer plate covers the front, sides and back. This fully-insulated body is as tough as it looks.

Around the classy looking body Urban has included all LED lighting as well as fitting plenty of Dometic windows, a Camec security door, two picnic tables with LED lights at the handle, an entertainment hatch, an external shower with a sail track system mounted above it for an awning on the driver’s side, and the list goes on. A Dometic awning and twin speakers with LED lighting in the surrounds add a neat touch. A Safety Dave reverse camera system is also a part of this package.

A light with the full-width tunnel boot illuminates the BMPRO 12-volt battery management unit and a CAMEC Break Away for the braking system. Opposite, on the passenger side is a slide-out for a barbecue with a convenient LED night light on the body above the slide.

Up on the roof are two 160W solar panels, Dometic Ibis 4 AC unit, Saturn Omni 300 antenna and several Finch roof hatches with LEDs. There’s certainly plenty going on with the exterior of this van. The decals do go over the windows, which looks okay from the outside but I didn’t like the effect on the outward vision. 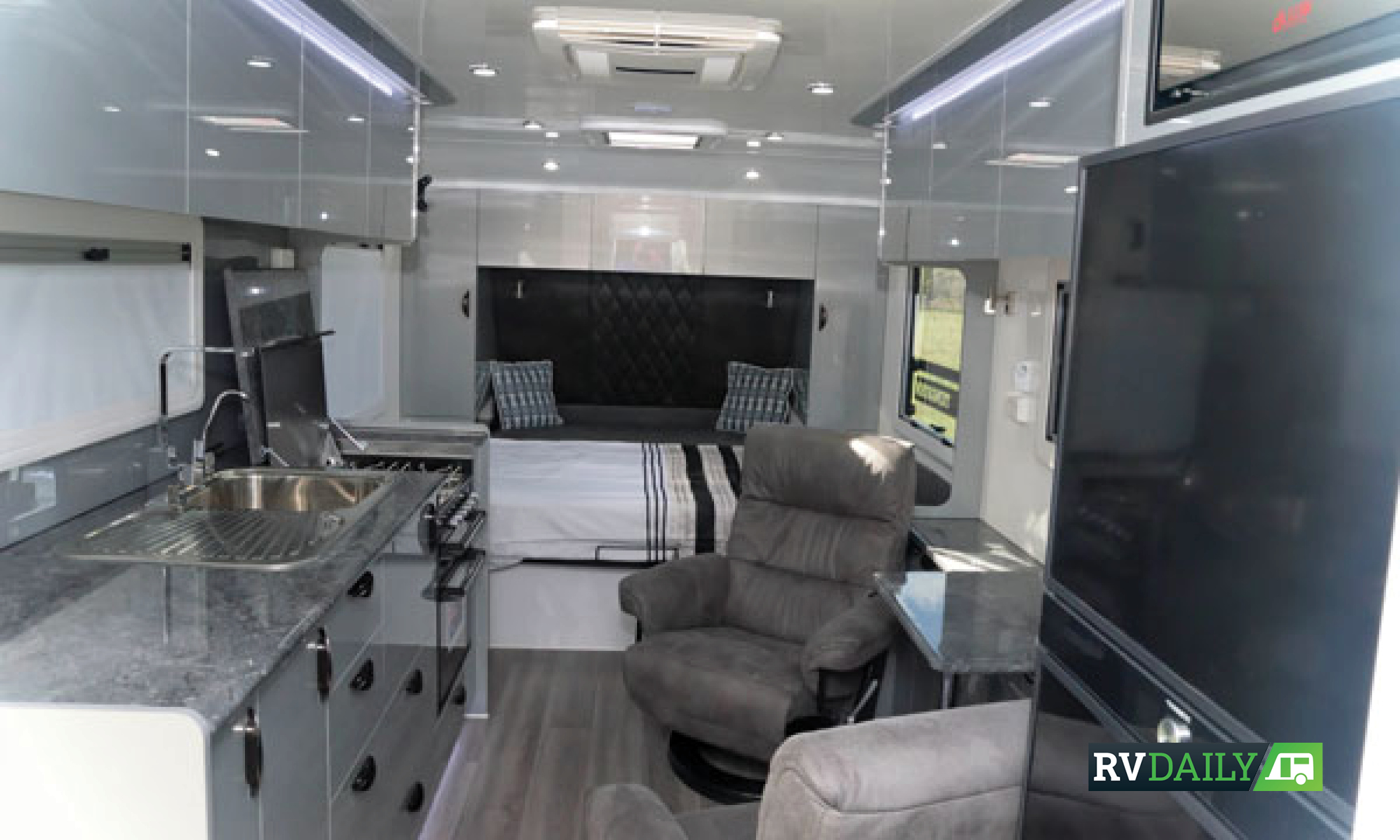 If the outside and exterior package was super specced, the interior is super neat and smooth; some might even say sexy. It’s like a hotel room in many ways and built for two people to tour in extreme comfort.

Entry into the van is towards the rear, behind the axles. On the right stepping in is the ensuite that runs across the back of the van. The ensuite is neat and well-appointed. A Dometic toilet sits against the driver’s-side wall. Just next to that, on the back wall are vanity cabinets then close to the toilet is a large cabinet that houses a Sphere 3.3kg washing machine. Next to that is a ceramic basin with flick mixer tap with the wall behind it up to the overhead cupboards one huge mirror. This mirror reflects a lot of light and makes space seem much bigger than it is. The shower cubicle is a good size too.

Moving out into the main living space the kitchen is on the left or passenger side and the dinette room is opposite. Kitchen-wise there’s a lot to consider. On the ensuite wall in the walkway from the door is a wall of cupboards or pantry with four doors for easy access.

The main kitchen starts on the other side of this walkway. Below the bench are several cupboards and drawers as well as a slide-out pantry. The benchtop has a deep sink, which includes a flick mixer and water filter tap. There’s a reasonable bit of bench space for food prep, dishes and the like. Next to the sink is a recessed Swift full oven with a 3&1 cooktop, looked after by a Swift rangehood, and there’s plenty of extra cupboards for storage. One cupboard is set aside for the Axis stereo/entertainment unit, various switches and the RV Wifi unit.

A Dometic three-way, two-door fridge is mounted on the driver’s side wall opposite the entrance doorway, making it easy to grab a coldie while entertaining outside. Above the fridge is an NCe 25-litre microwave.

From the fridge to the bedroom is a unique dinette space that features two leather swivel chairs, a trifold table and a benchtop that runs under the window. Urban has turned this section into a wall of storage cupboards that can be easily accessed plus overhead cupboards as well.

Across the front of the van is an island-style queen bed with a pillow-top mattress and a very swish upholstered leatherette bedhead, which is quite rare. The bed is surrounded by overhead cupboards above and wardrobes on the sides. There are pigeon holes in each wardrobe to allow for storage of books and other personal items and close by on the wall of the van are 12 and 240v sockets for phone charging and more. Beneath the wardrobes are cupboards with a benchtop that allows for a glass of water or a cuppa to be enjoyed while in bed. Under the bed are twin 100amp/hr lithium batteries and plenty of extra storage.

In the walls either side of the bed are good-size windows and some great leather storage pockets to hold magazines and the like, this is really a neat touch.

On the wall to the kitchen is a TV swivel mount to host a 24-inch Kogan TV and a Truma Vario gas heating system control unit. There’s also a Sirocco fan mounted on this wall and another mounted in the other corner facing the bed.

I really liked the interior design and layout. It’s easy to work with, practical and comfy. The dinette swivel chairs might take some getting used to, but while heavy they can be moved around easily enough to reach the wall of cabinets and the storage behind.

Other features include full LED lighting, twin internal speakers and a BP35 water gauge mounted on the wall of the overhead cupboard near the door to keep an eye on the water movement of the tanks. 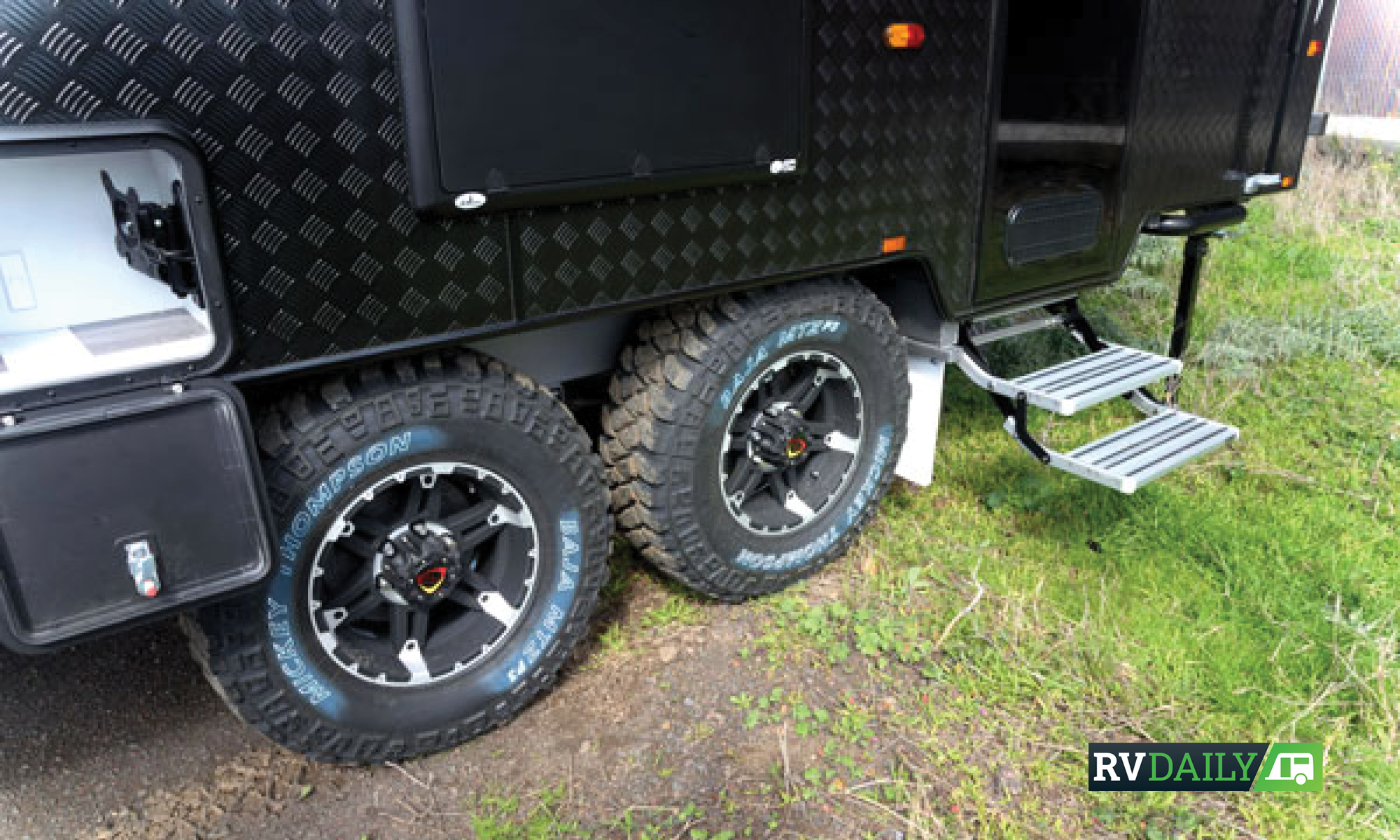 We towed the big Urban with a Range Rover, which of course had plenty of grunt to haul the roughly three-tonne van. Between the airbags on the van and the air suspension on the Rangie it was a smooth ride although soft-choppy over certain bitumen surfaces. Other than that it just sat well on the road. This van is properly built to go off-road, with engineered confidence and backed with a warranty for that terrain and while we didn’t get a chance to push things there’s plenty of ground clearance under the van to allow it to work well in these conditions.

For 100 big ones, this Tungsten X-Treme is filled to the brim with equipment and lots of the available options extras added by the new owners. It’s a big, flashy van, very practical in its layout and I suspect it will be a more than capable off-roader too. There’s also a level of classiness inside and out that makes this Urban van more than just a touring van – it’s a hotel on wheels. The main point is the inherent strength brought to the build by the TIG-welded frame that sets this van apart. And a company that offers a full warranty for off-road use, and stands behind it too.