In part one of Understanding the dynamics of Towing, we discussed brakes, nose weight and the centre of gravity. In part two, we look at twin-axle trailers and weight balance.

As in part one, the examples used are of lighter UK vans, but we’re again discussing that world-wide phenomenon of physics. There will be several parts to this series, beginning with the basics!

There are two basic types of twin-axle systems, the first is more complex and is usually found on larger trailers, such as well as car transporters, builders plant and heavy flat-bed trailers. 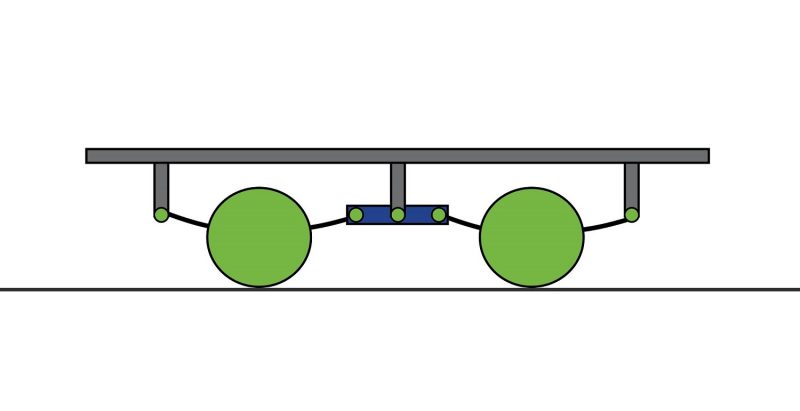 In these, the two axles are crossed linked by a block that is allowed to pivot, so as any increase in weight on one axle is partly transferred to the adjacent axle, so that any pitching movement or unbalanced load will, within limits maintain equal weights on both axles and both wheels will maintain contact with the ground. It is still, however, important to maintain sufficient nose weight on the hitch. 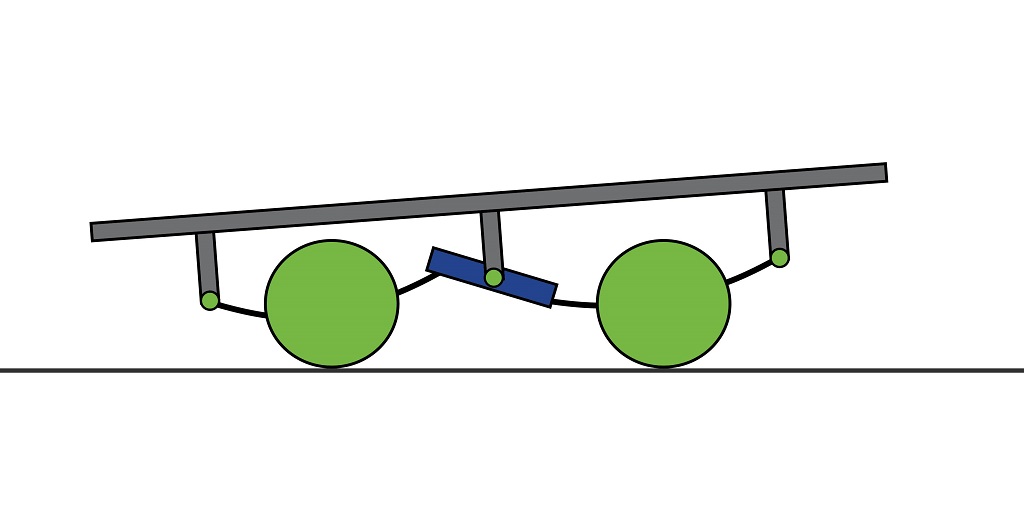 The second system is basically two single axles mounted on the same chassis. 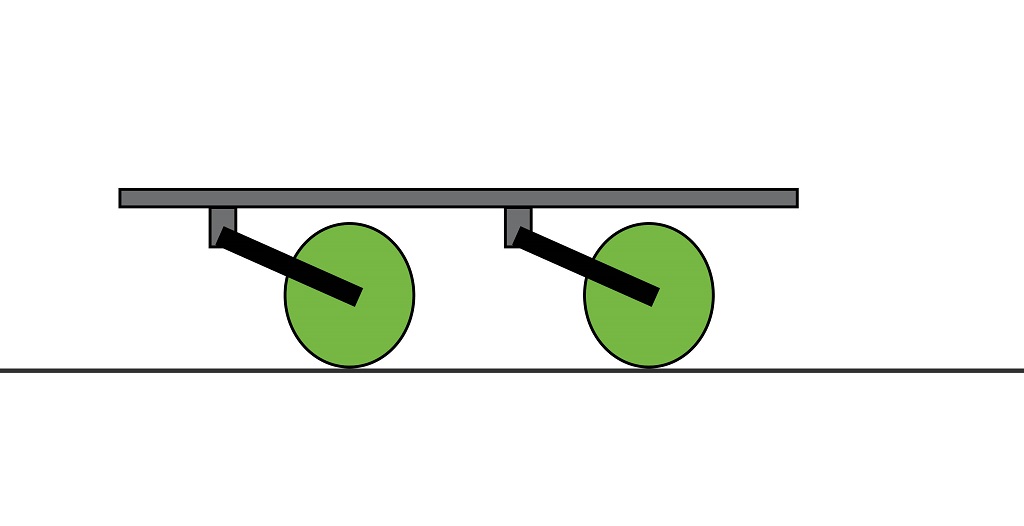 The suspension is a lever arm with a wheel hub at one end and at the pivot end it can be a torsional tube or a square shaft inside a box with rubber packing providing the suspension. The most common suspension is shown below.

The suspension operates by compressing the rubber packing strip inside the chassis box section (axle) as the pivot arm moves up and down with the wheel hub attached at the end. This is a very simple solution and is lightweight in construction, low maintenance and there is very little to go wrong. This suspension system is un-damped and one of the upgrades often sought is to add shock absorbers to reduce any oscillation.

This system is fine for single-axle outfits, however, it does have certain limitations when two of these are combined to create a twin-axle caravan or trailer. Let’s have a look at the suspension again, with an unbalanced caravan. As the centre of mass is moved this has the effect of increasing the load on one axle and reducing the load on the other and is the reason why the axle load rating is often reduced when used in twin configuration. 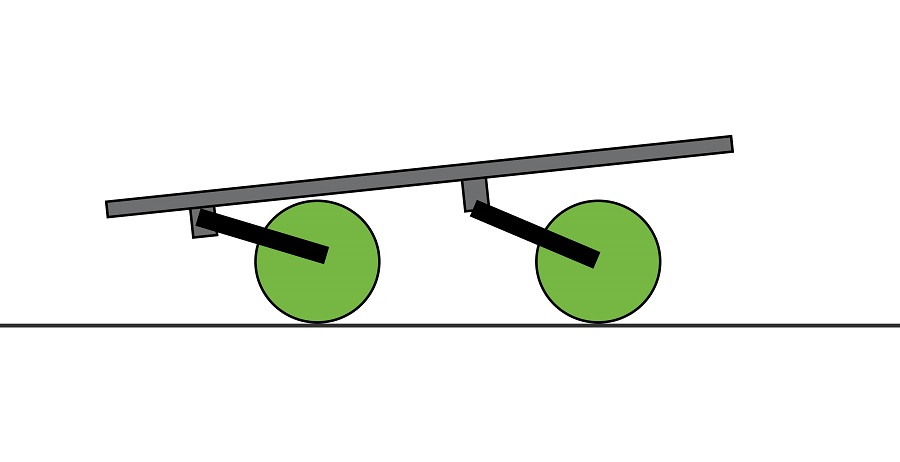 There are several factors to now consider. For simplicity, if we consider the effects in an uncoupled trailer. The tyres fitted to a twin axle will have a load rating, just as tyres fitted to a single-axle caravan have, however, we are now distributing the load more on to one axle than the other, so if, for example, the caravan maximum load is 1600kg and in a balanced condition, there will be an 800kg load on each axle. If the tyres are rated for 500kg, this is within limits (remember 800kg on an axle means a load of 400kg per tyre) However, if the caravan is loaded with the centre of mass too far forward, the load on the forward axle now could be 1000kg and on the rear 600kg. A 1000kg load on the forward axle is at the maximum for the tyres rated at 500kg. 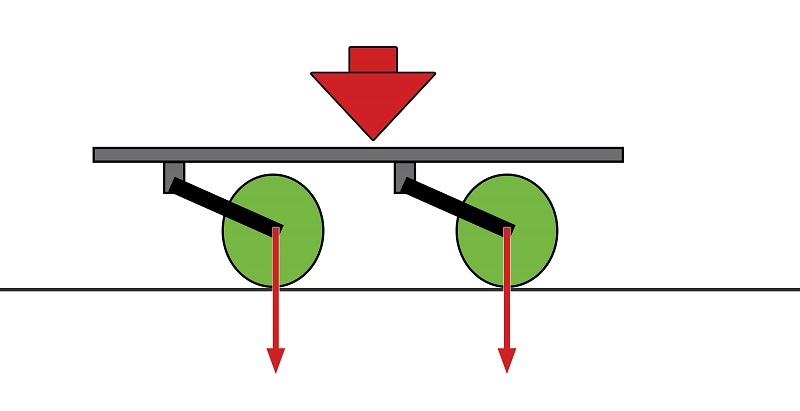 So, we can now work out the moments:

Now, in practice, we can’t move the total mass of the caravan forward, what we can move is the items we store in the caravan. So, our maximum mass or ATM for the caravan is 1600kg and the Tare for the caravan is 1400kg, so we are allowed 200kg for the awning, supplies, folding chairs, clothes, etc. How will this affect our calculation? Well if we use exactly the same table as above only this time, we calculate for the 200kg movable load. The 1400kg Tare weight will not change as we now assume that everything else in the caravan is fixed in position.

It can now be seen that moving the 200kg load forward by 250mm has the effect of increasing the load on the front axle to 850kg and reducing the rear axle load to 750kg. Move the load forward by 1000mm and the load on the front axle is now 1000kg and on the rear axle it has dropped to 600kg. The front axle is now on our maximum tyre loading of 500kg! Obviously this is in an uncoupled trailer, as it’s easier to calculate. Once coupled to a tow vehicle some of the forward loading will be taken up by the tow vehicle hitch.

So it doesn’t take much movement of weight to make a marked difference to the load on a twin-axle trailer. In part three of Understanding the Dynamics of Towing, we talk about nose weight. Click here to read it

This article was written by and reproduced with kind permission of Simon Barlow at Caravan Chronicles. 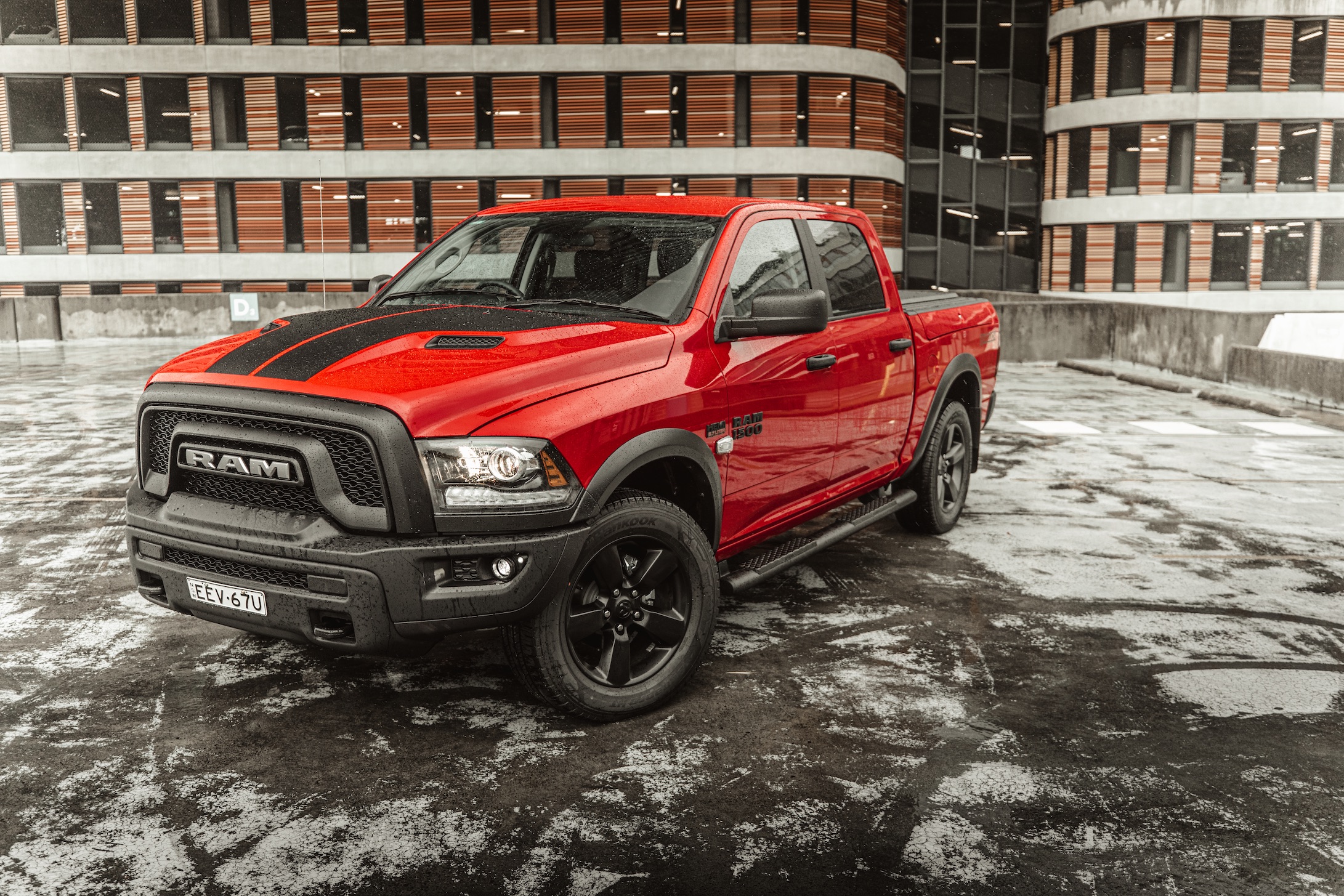