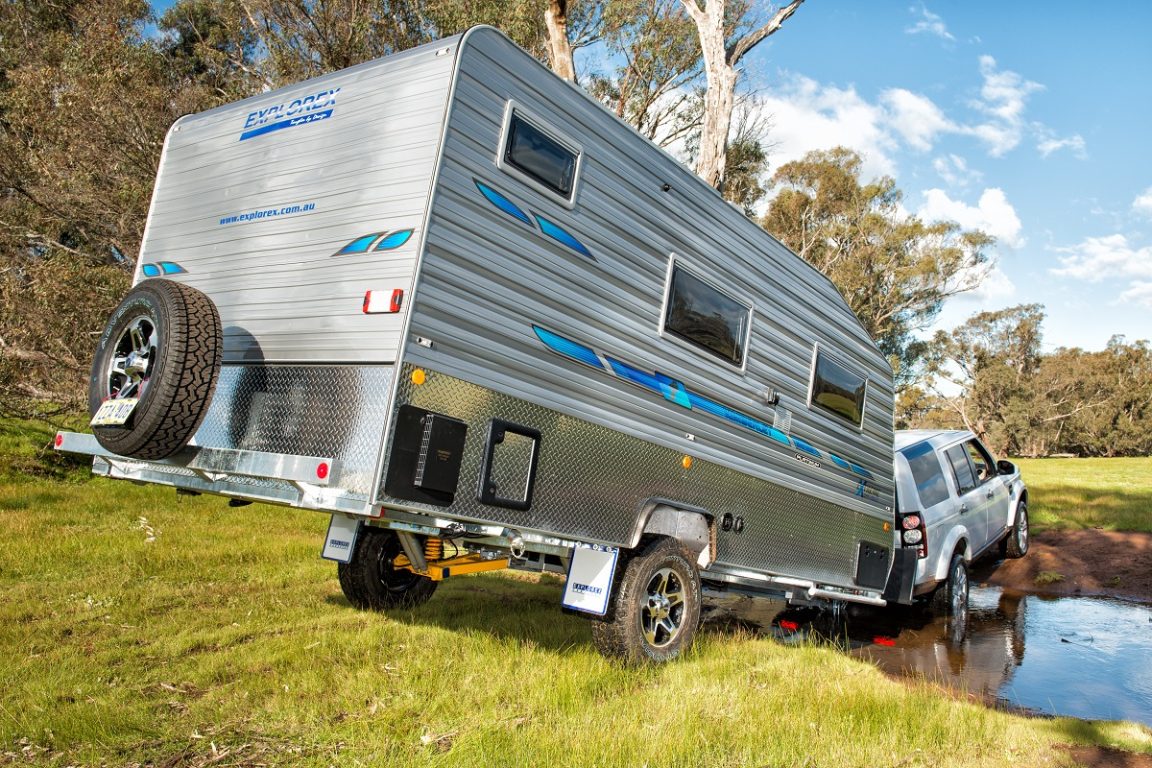 We look at the facts behind caravan suspension and ask, do you really need that independent set-up?

Before we get into what’s important about the facts behind caravan suspension, let’s take a step back and think about what job the suspension has to do. It’s pretty simple: Absorb the undulations in the road. That means when a wheel goes over a bump or into a depression the movement of the wheel is not transmitted to the entire caravan, which minimises bouncing and bucking around. 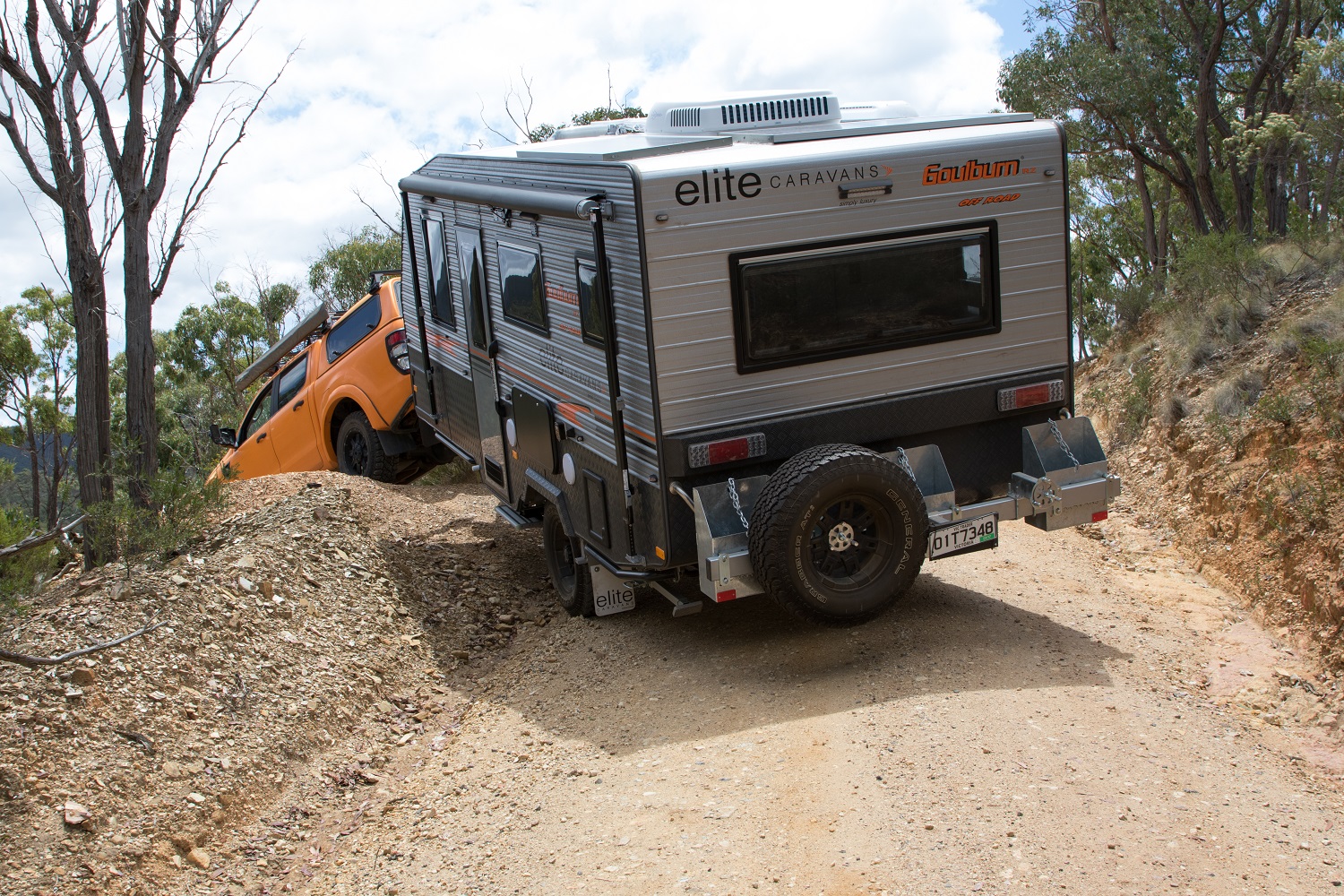 The better the suspension, the smaller the unwanted forces transmitted to the tow vehicle and the smoother and safer the tow. There’s also less stress on the trailer itself, and its contents. Good suspension means that the tyres are properly in contact with the ground – which is important for braking, cornering and even fuel efficiency (as a bouncing tyre is not an efficient tyre).

Some suspension can even help with cornering by changing the angle at which the tyres meet the road as weight shifts to the outside, and help keep the trailer stable if trailer-sway sets in. That’s ‘help’, not guarantee.

So how does trailer suspension work? Just like car suspension, there are essentially two main parts – the spring and the damper (also known as a shock absorber). The spring is something elastic, meaning a material that returns to its original shape after deformation. In the case of a spring, that’s either compression (wheel hitting a bump) or extension (where the wheel drops into a hole). Springs on trailers are usually either coil springs or leaf springs; or sometimes air springs.

The thing about springs is that they are, well, springy. When compressed or extended they take a few cycles to stop compressing and extending – just like a rubber ball dropped on a hard surface bounces. That’s where we need something called a ‘damper’ in most of the world and a ‘shock absorber’ in Australia.

Imagine a coffee plunger – a stick connected to a plate with holes in it pushed through fluid. That’s pretty-much a damper, and its job is to damp out the compression/extension cycles of the spring. Without dampers cars and trailers would pogo-stick their way down the road, and indeed you can see this with smaller trailers that have springs but no dampers (the reason that works is because these smaller trailers are usually fitted with leaf springs, and the movement of each leaf between the others has a damping effect). Most important of all, a small trailer has a small effect on the tow vehicle. 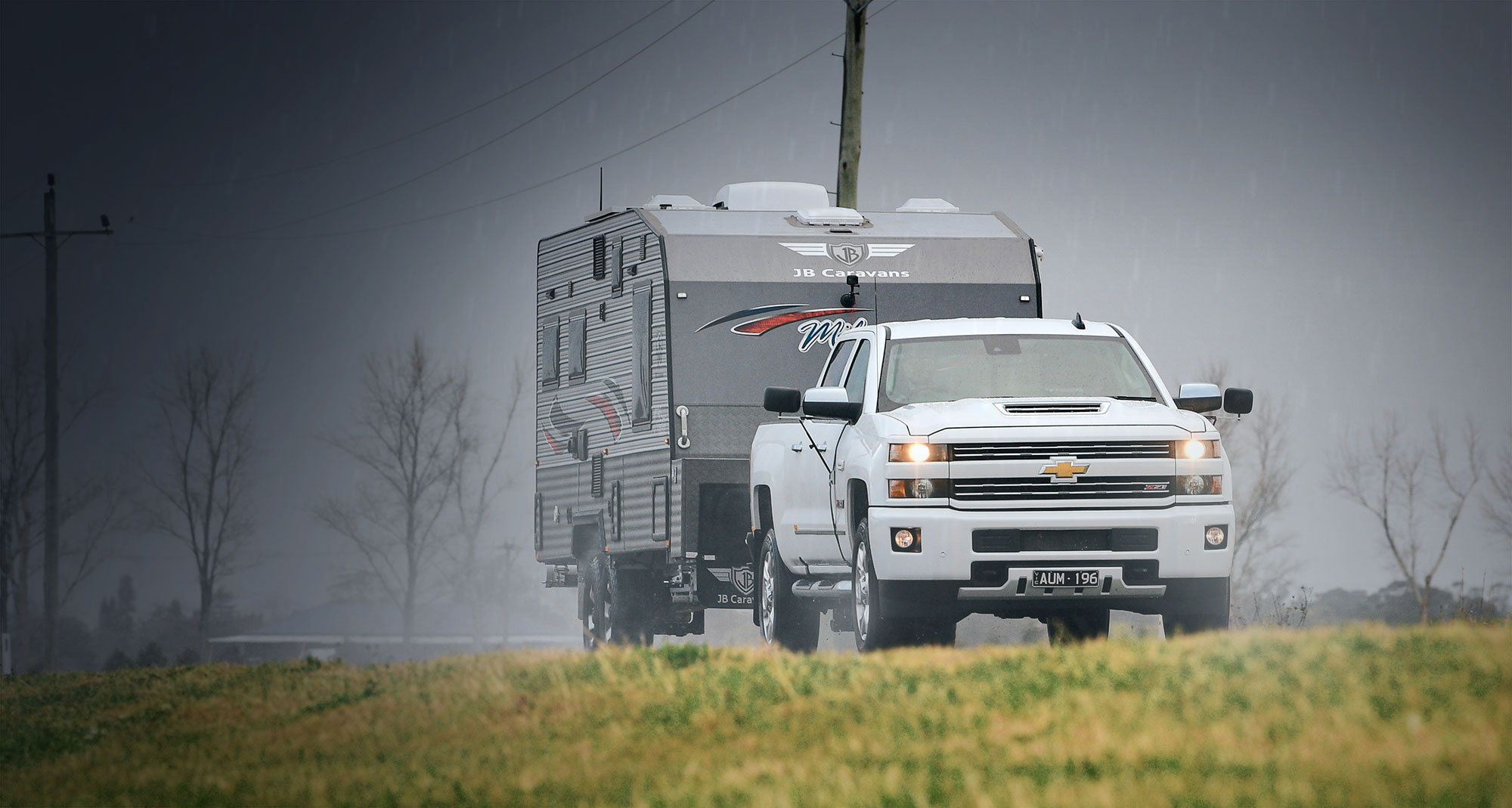 The bigger the trailer relative to the tow vehicle, the more important trailer dynamics become. There’s a guideline of sorts that, for safety, says the trailer should never weigh more than the tow vehicle… but in Australia, we tend to ignore that.

Off-road caravans have a bit more work to do than on-road versions. The term ‘off-road caravan’ is a little bit overused these days; but for me, there’s a simple test. When I borrow the caravan, or you buy one, the answer to the question “Where can I take it?” needs to be an instant “Anywhere you can tow it.” That is indeed the case with some manufacturers, but not all. An off-road caravan has to deal with dirt roads, which means a higher risk of damage to componentry from the likes of sticks and rocks – so everything needs to be built tough. The suspension also needs to provide good ground clearance, preferably much more than the towing 4WD which can (to some extent) pick its lines for clearance; something harder to do for the trailer. The biggest job for an off-road suspension set-up has to be heat dissipation. Remember the suspension lets a wheel move up and down relative to the caravan? That movement creates energy, and the laws of physics say that energy has to be converted into something else… and in this case that’s heat. Dampers are basically devices to convert up and down movement (kinetic energy) into thermal energy, which is why they get hot. Much like brakes convert kinetic energy to heat. An off-road caravan’s dampers need to handle a lot of heat because the caravan travels long distances over rough ground, and the dampers must not get so hot in the process that they lose effectiveness (known as ‘shock fade’). That’s the spring/dampers described, and now to the two basic suspension designs which are live axle and independent. 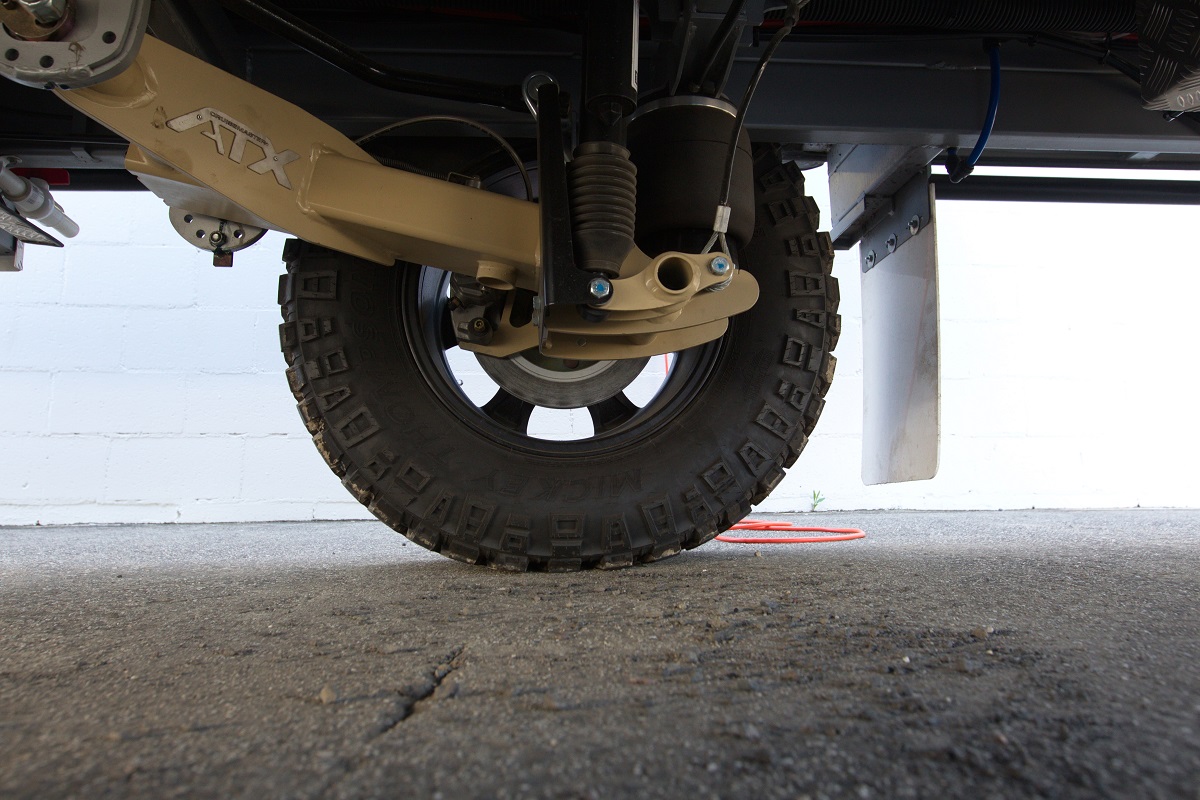 Toe is when the wheel isn’t aligned quite straight with the trailer, pointing inwards or outwards a touch; and camber is when the wheel is leaned in a bit. You can see extremes of camber and toe on race cars. If set correctly, this alignment can assist with trailer stability. On the other hand, live axles are simpler; and arguably tougher.

Any type of spring can be used with either live axle or independent suspension, although most live axles use leaf springs and most independent designs use coils or air.

So, what’s the most important suspension design if you want a nice, stable tow? Which combination is best – independent or live, then air, coil or leaf? Which glossy brochure should you believe?

The answer is proper weight distribution, good build quality and solid tuning. Yes, it’s true. For a good tow, weight distribution comes first by a long margin. You can have the world’s finest suspension, but if your trailer is nose-heavy or nose-light, or your towball mass is too high or too low, you’ll have problems.


And if you’ve got your towball mass within limits, but you’ve got heavy weights on the drawbar and other weights right at the back to balance, then you’re towing a giant dumbbell and you’re going to have even bigger problems.

Read next: Understanding the dynamics of towing

To put this in perspective, go find two full wine bottles and stand in the middle of a big room. Place one in each hand, and extend your arms out horizontally. Now spin 180 degrees and stop, fast as you can. Then hold the wine bottles close to your chest and do the same again. Same total weight, but very different result. Your caravan has the same problem too – and not just horizontally, either. It will also pitch up and down vertically, which also leads to imbalance.

And let’s be very clear, no amount of suspension design can do anything other than tinker at the far edges of that weight problem. Fixes like weight distribution hitches, anti-sway controls and super-stiff springs can help, but ultimately these are all just masks, band-aids that don’t fix the underlying problem – which is readily apparent once you get into those occasional moments where you get a bit closer to the rig’s dynamic limits than you intended. Everything tows well as you pull away up to 60km/h.

Anyway, let’s get back to the facts behind caravan suspension. If all else is equal, is independent better than live axle? The answer is: It can be. That is because of the reasons described above – potential for steering correction, ground clearance, and more independent absorption of shocks. 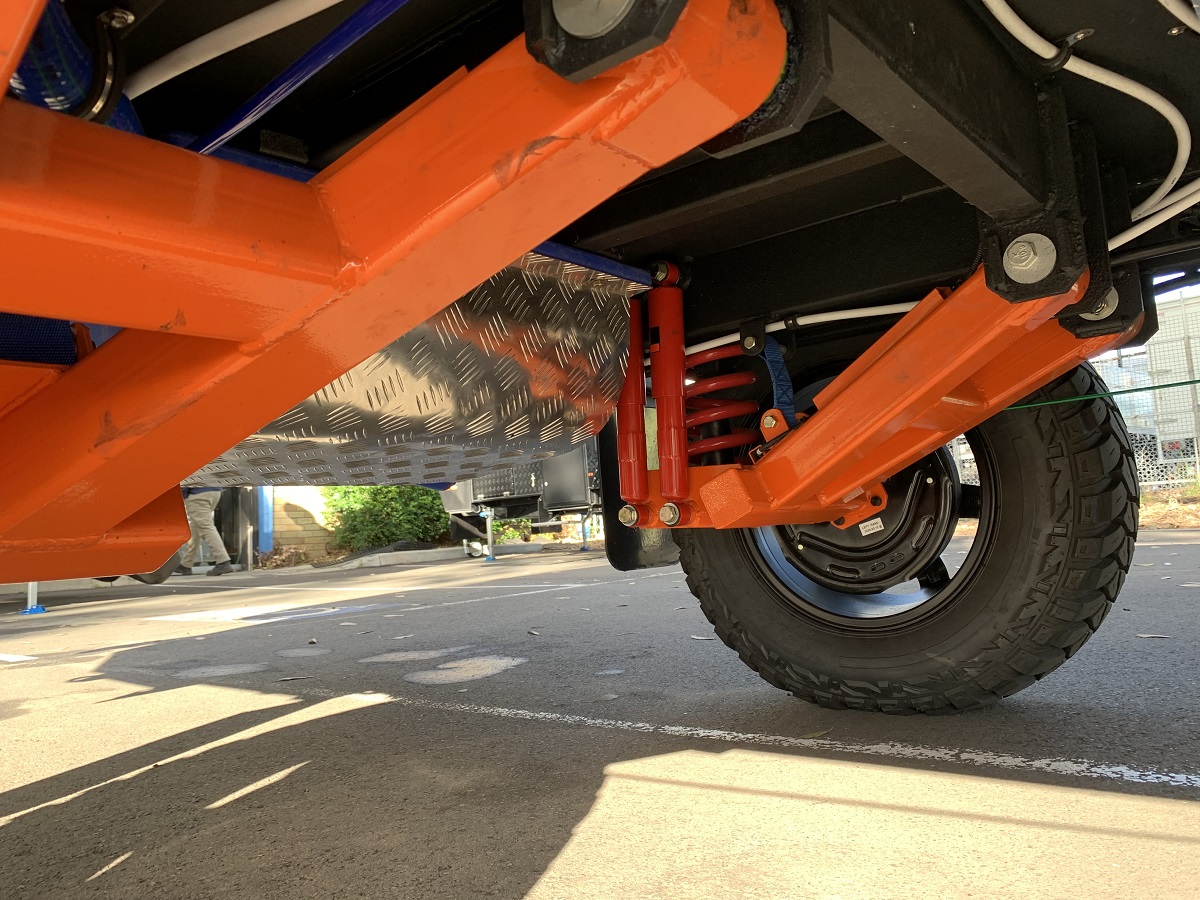 The thing is, while independent suspension certainly has the potential to be better than live axle suspension, that doesn’t mean to say that every company has done the engineering hard yards to actually realise that potential. Many, many claims have been made about the wondrous nature of brightly-coloured independent suspension with impressively thick control arms, but it’s hard to find significant evidence provided by most of the manufacturers to prove true the statements made on their brochures. I’m talking here about tests with two identical caravans and tow vehicles addressing aspects of the suspension, such as braking on a variety of surfaces, cornering limits and resistance to sway… all at a variety of weights, with all tests carefully instrumented and videoed with as many variables removed as possible. Then we’d be able to see the differences between independent and live-axle suspension for ourselves because a claim is nothing without evidence. And there should also be evidence of long-distance, fully-loaded testing on rough roads to ensure nothing breaks and the dampers don’t fade. 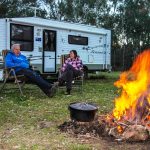 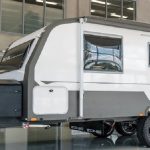