Re-open Tassie for Transportation … and take me! 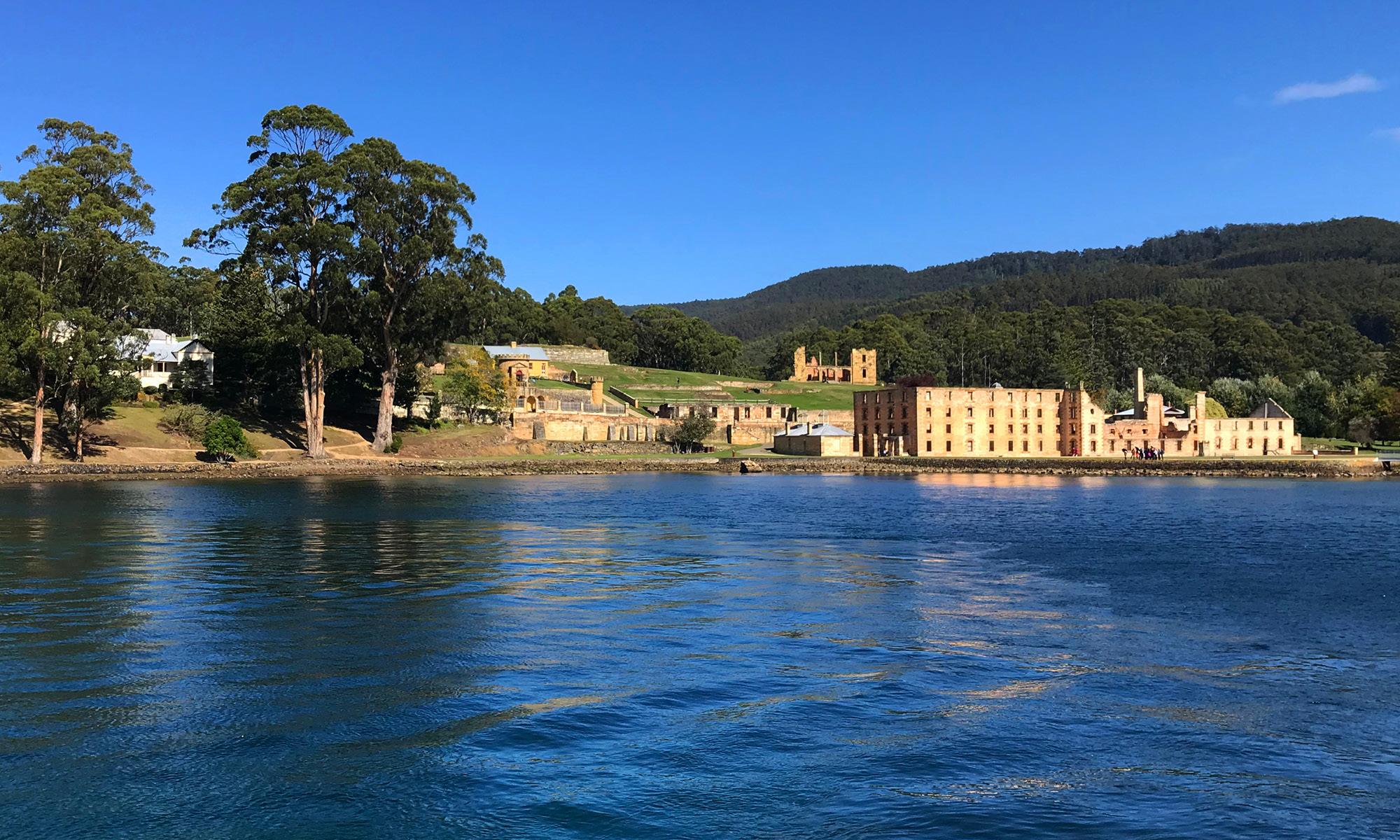 As his trip comes to a close, the Ed. ponders his ticket of leave and knows it will be a return

Having lost track of time, and touch with the workaday world, returning to the Tasmanian mainland from Bruny Island I was surprised to watch a queue of traffic heading out of Hobart through the little localities of Snug and Margate. Not stalled, just a steady stream of people going home from work. Even as I made my way through Hobart the only slightly stressful thing about the drive was the lack of through-signs to show me where to head for, but then, in among the gridded street system the legend Sorell appeared and directed me over the Tasman Bridge – and that’s a pretty cool experience, too. 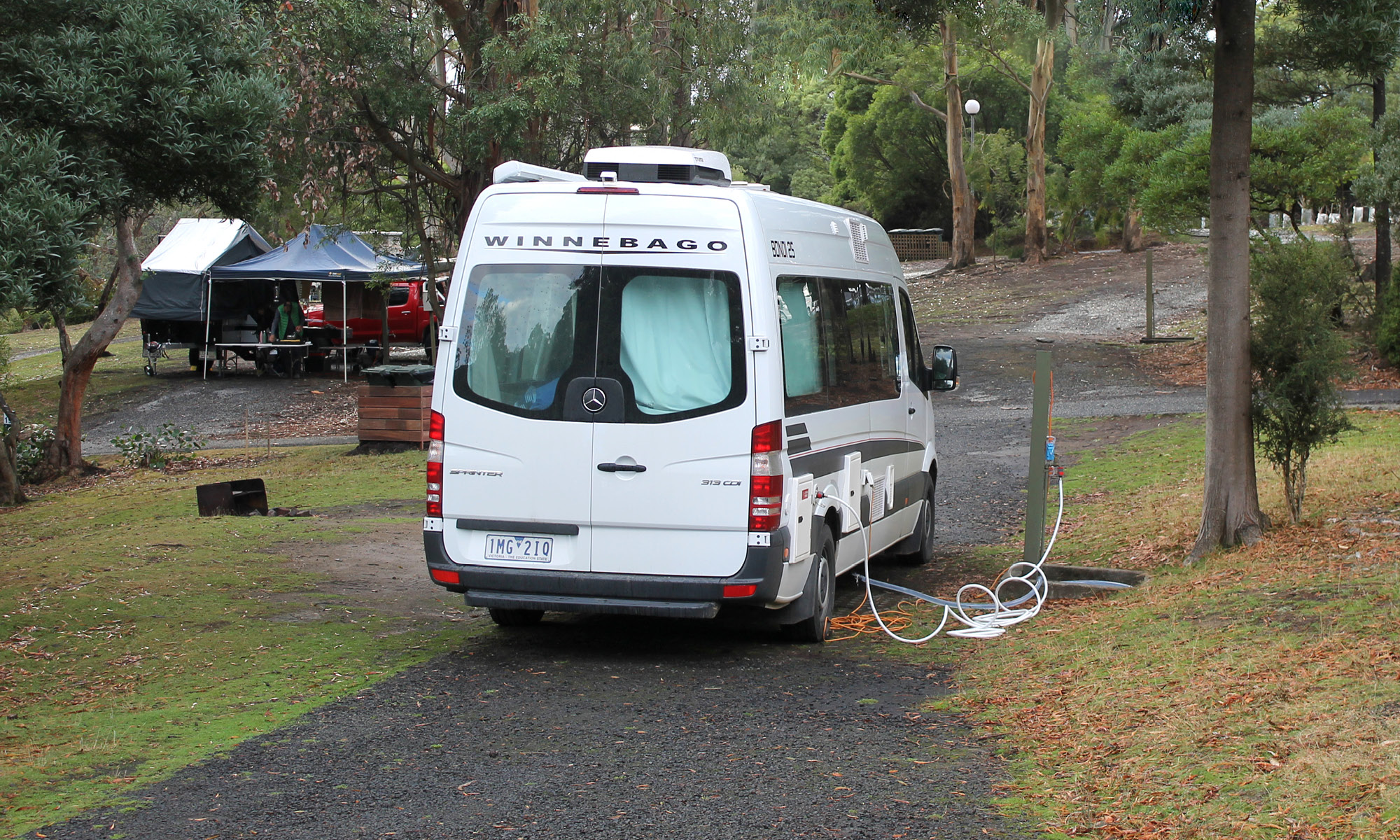 To reach Sorell it’s necessary to cross a couple of narrow roadways flanked by water; ‘roads subject to sea spray’ the sign says. Must be quite a commute in rough weather! It’s a sweeping road through farmland on the A9 that takes you south towards Port Arthur. Little communities whizz by, offering glimpses of rural life with all manner of homes, from tiny shacks that have been there since settlement to modern installations – and this is the same all over Tassie, with some amazing constructions warranting an episode of Grand Designs. It’s on offer for the tourist too. Innumerable accommodation options to suit all budgets.

And to suit my accommodation budget that night was a caravan park, namely the Port Arthur Holiday park, managed by the NRMA. I phoned ahead, just before the reception office closed as it turned out and booked over the phone – details to be left in the dedicated box by the gates. Handy. Given the proximity to the Port Arthur historic site (quite a tourist drawcard, y’know) it’s popular with schools and the lady on the phone told me they’d got a large group in. She’d site me well away she said. Apart from the whizzing sound of a remote-control car somewhere in the dusk and the muffled laughter of kids, I heard nothing of the uniformed hordes I’d anticipated.

It wasn’t quite the same once within the grounds of Port Arthur itself. As the children enjoyed themselves in the historic site one of the tour guides quietened them down with a bellow that did the trick and their high-vizzed teachers meekly shepherded them into more manageable groups. 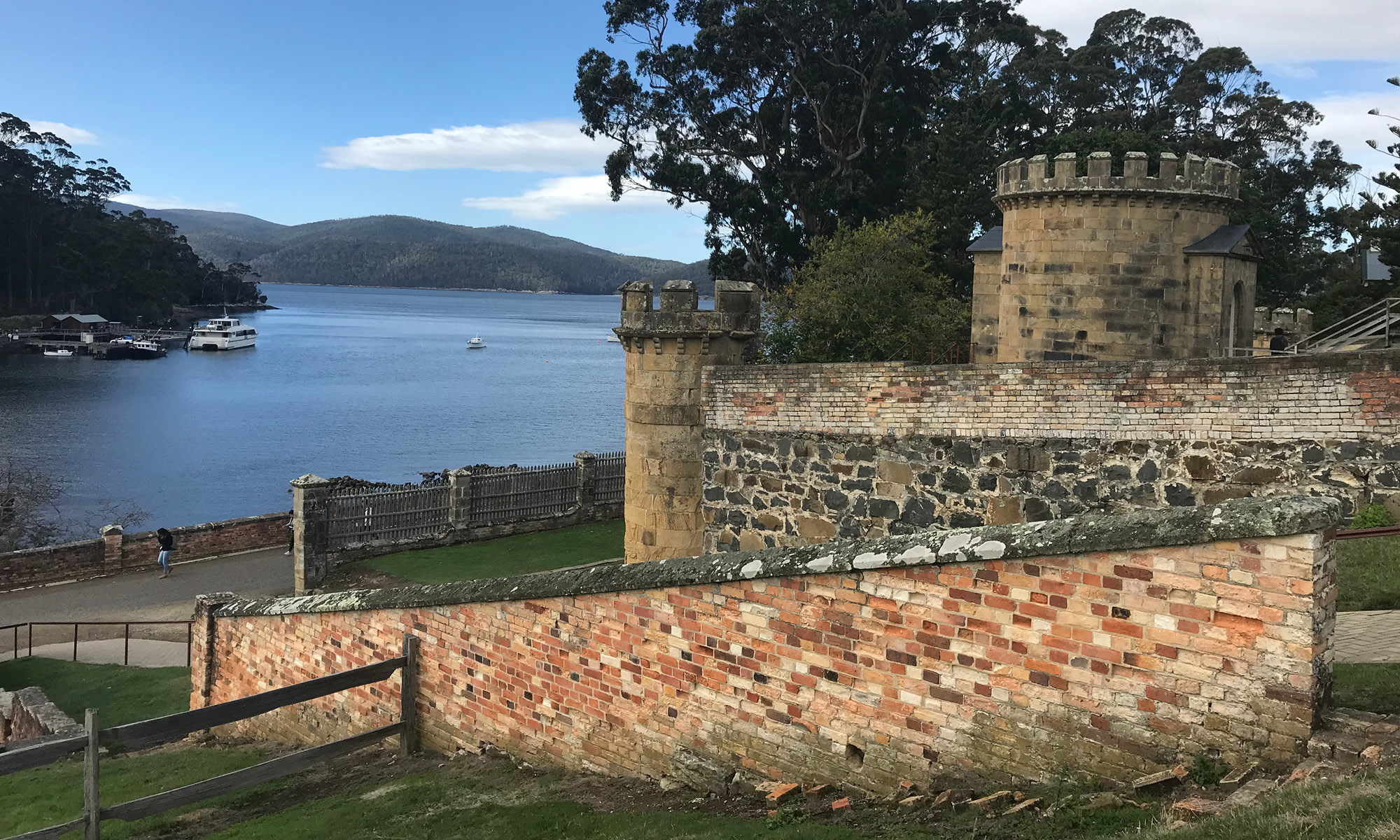 A guided tour of about 40 minutes is included in your entry fee. I followed that for a while at lunchtime but as I arrived I’d decided to add in a boat excursion. Again, a harbour cruise is on your ticket but I added a side trip to the Isle of the Dead. Well worth the extra $20. The grimly-named isle was the burial ground for Port Arthur’s departed (no doubt tortured) souls though only special dispensation was granted to convicts for a headstone. No-one’s positive but there’s roughly 1100 convicts buried there in unmarked graves. You can also check out Point Puer, where an equally hellish time awaited the youth of the day. The first juvenile prison in the British Empire meted out its treatment to kids as young as nine between 1834 and 1849.

The Port Arthur site is massive. Anyone popping in for a quick visit is doing themselves and the location a disservice. It’s simply too big, so your ticket covers two entries and if you linger long on the same day you can opt for a ghost tour too. I found it all fascinating. It has stories of misery, hope, bravery, loss and hardship. The only hardship I’d suffered was my feet. By four in the afternoon, and with no decision on where I was staying that night, it was time to move on. 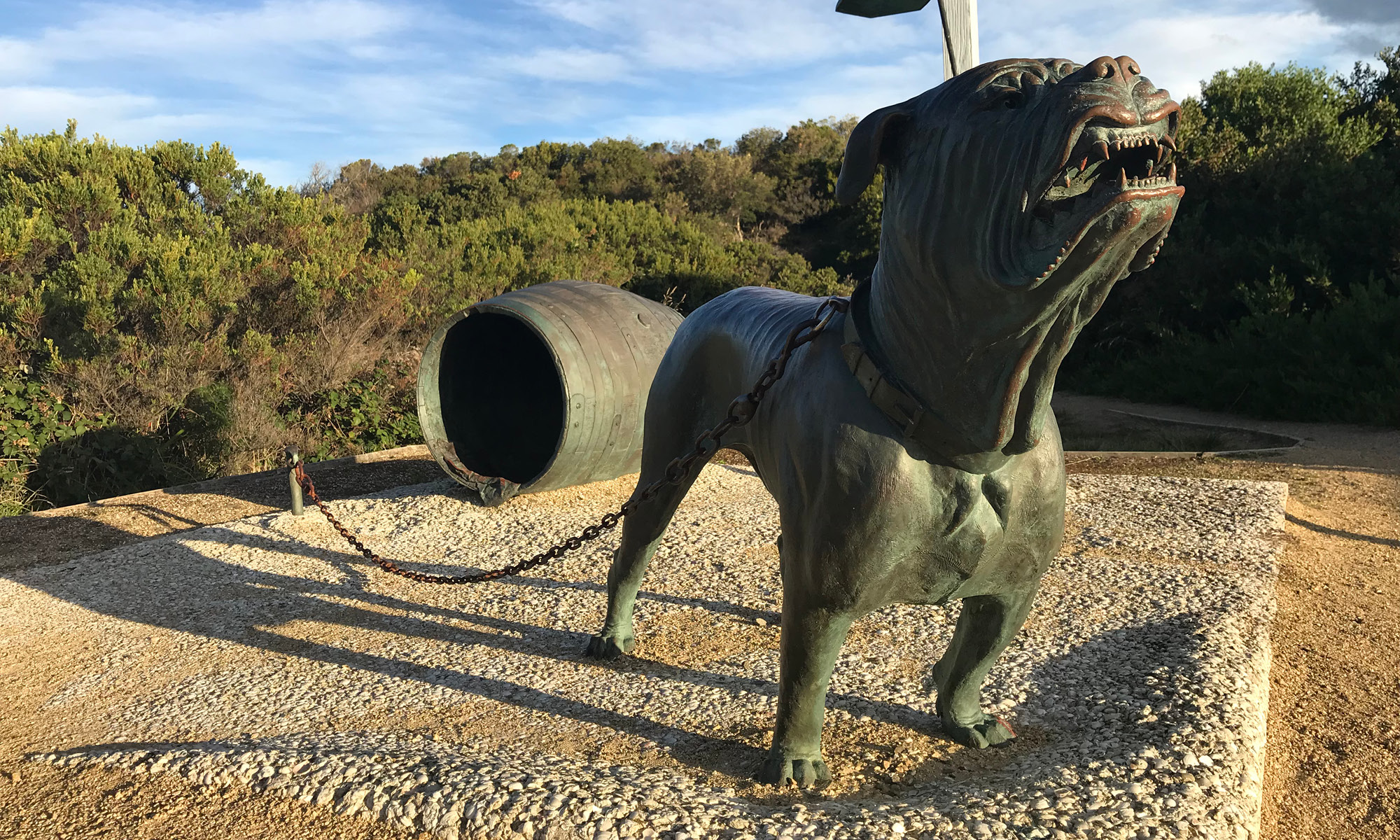 Sadly, there’s an astonishing amount of roadkill evident in Tasmania. When you remember the endangered status of several species, notably the state’s icon, the Devil, it’s particularly alarming. I was thankful to not have been responsible for reducing the wildlife count during my trip when, bang! One member of a parrot squadron decided to double back on its flypast straight into the front of the van. It was bad enough knowing I’d probably killed it (at 100km/h I didn’t stop) but the misery was compounded when I had to remove the corpse from the radiator the next morning.

I’d heard of the camping available at the Dunalley pub, so that was the destination for the evening. Plenty of vans were already set up, and the requisite backpackers too, but there was lots of space. I parked up and headed straight to the pub to for dinner before leaving a donation in the box to support the camping area’s continuation. I spent the rest of the night messing about with the camera taking star pics and wondering if the Euro gaggle would shut up shop early or carry on into the late hours. They did the former and a super quiet night descended. The bit I missed. Freycinet Peninsula will have to wait

In the morning I had to decide whether to head up the east coast or inland to make my way back toward Devonport and Friday night’s crossing on the Spirit of Tasmania. To be honest, either way looked like I’d be rushing a little and of all things I needed to find some toilet cassette drop-in sachets! None of the caravan parks since Stanley had sold any. So I ended up backtracking to Cambridge, beyond Sorell to find some. I sought opinion from social media and in a caravan park at Sorell and the decision was to head up the coast to Swansea and then track inland to Ross. From Ross I would make my way back to Devonport.

While the initial drive to Triabunna was unremarkable, the second stage to Swansea was much more dramatic in its outlook and it chided me of what I was missing on the Freycinet Peninsula. The B34 to Campbell Town was comparatively dull too. Not awful, just not the coastal splendour.
I’d wanted coastal bounty in Triabunna, namely fish and chips but I was told I’d have to wait as a boat from Maria Island was about to spew a horde of hungry school kids and they’d pre-ordered an amount that was keeping the kitchen flat chat! Pesky kids… 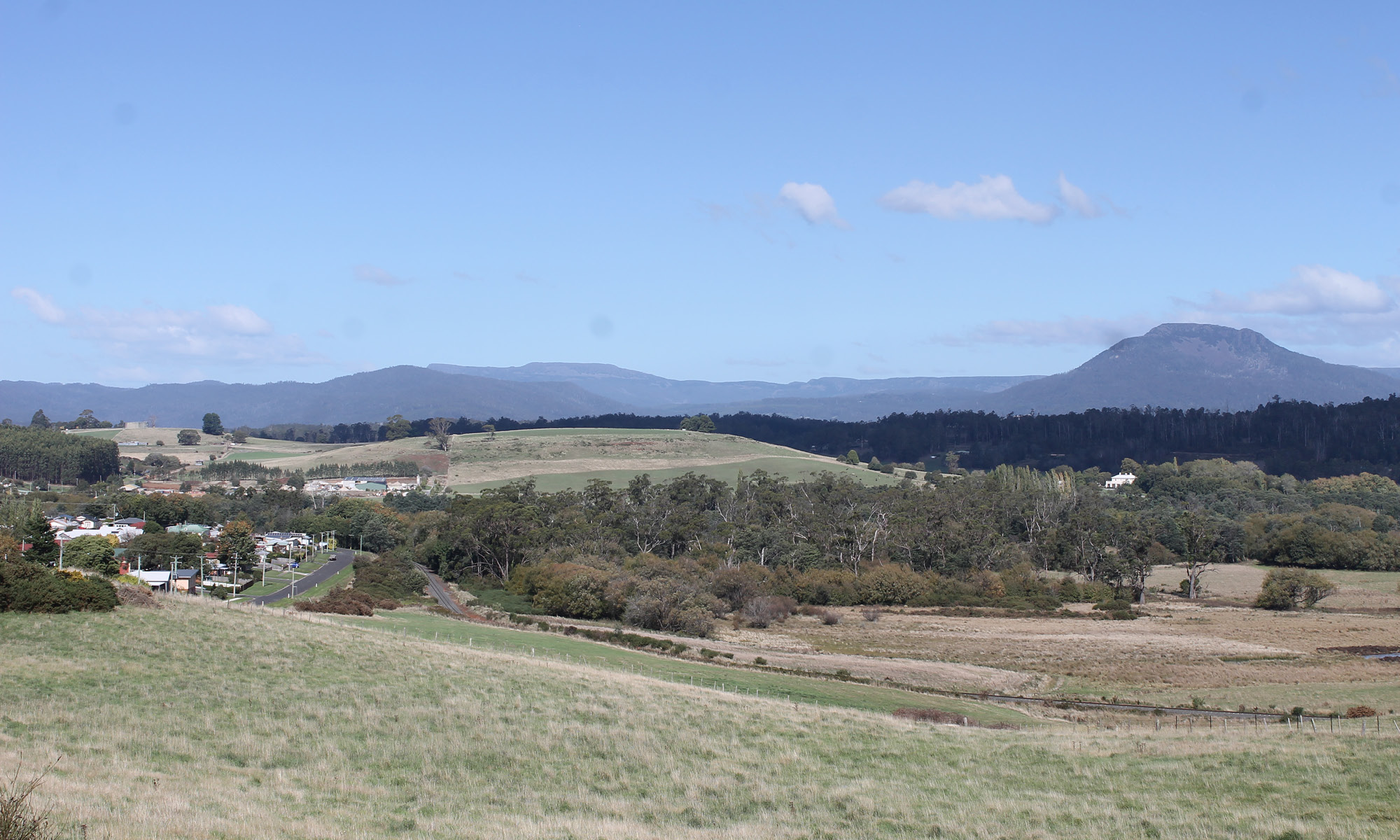 Braddon’s Lookout; not a bad spot at which to kill time

So my last night in Tasmania was spent in historic Ross. In the caravan park right by the Macquarie River and the much-photographed stone bridge. I tried photographing it at night but failed spectacularly. I had dinner at the warm and friendly Man O’ Ross pub and given the ghostly ambience of the town that night expected a very quiet Good Friday on the morrow. I was wrong – vans, campers, motorhomes and hire cars appeared from wherever and the place was bustling, which was great for the businesses that decided to open. I bought a pie, a coffee, and paid a quick visit to the Female Factory site and then pointed the Winnebago in the direction of north and set off.

In my quest to be organised, I had done myself a huge disservice. While exploring the Freycinet Peninsula would have been a step too far, I made the trip to Devonport via stops in Campbell Town, Deloraine, Westbury and Launceston, and then even had time to tootle along the coast to Ulverstone (where I’d started two weeks prior) and rest-up atop Braddon’s Lookout. Even in Devonport I had a wait – I could have seen so much more. Again, the small distances and the ease of travel around Tasmania caught me out. I will know for next time.

One more treat awaited. As I boarded the Spirit for the night crossing back to the big island, I asked a crew member where my cabin was, as the numbers didn’t seem to continue up the corridor to match my ticket. “Oh, that’s up the front,” he said. And it was. Right over the pointy end. Thank you to the Spirit folk; I sat in the window like an excited kid as we steamed into the Strait. And I should be grateful because that excitement took the focus away from being sad at leaving behind what is truly an amazing place.