Week four of the Retreat electric van testing and our intrepid explorers are in the Goldfields of WA, parked up ready to go prospecting. In what has proven to be some tough weather conditions with very little sun, heavy cloud and cold temperatures, the van is holding up well power-wise.

As a part of the original testing, the crew were going to plug another van into the Retreat so they could draw power from the ERV, but in a flurry of ‘why not’, some bright spark then plugged a third van in to run off the system, and that it did for several days until the electric van’s battery dropped down to 23 percent.

They moved the ERV into a better position from under the shade of some tall trees into the full sun to re-charge the battery and take advantage of a break in the cloudy weather.

If the weather had been a bit kinder, the three vans could have been plugged in for many more days, which was amazing for the crew to do as part of the testing.

The ERV was used for the bulk of the cooking using virtually every appliance. Electric blankets were used at night because it was cold and the AC was used in two of the vans during the heat of the day when temperatures ranged into the high 20s.

As a part of understanding the electrical charge and discharge figures, OzXcorp’s Andrew Huett collected the data and shaped it into a graph. It’s a little crude by his standards, however it really shows the state of the battery as it drops, the periods where charging was occurring and some very interesting peaks in the power consumption as appliances were turned on and off.

Stay tuned to RV Daily as the electric caravan adventures continue through WA. 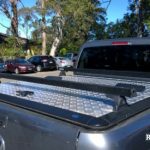 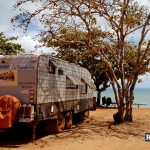