New Age Caravans has added four new dealerships in just eight weeks, taking its total network in Australia and New Zealand to 16 and has become an official Redarc installer.

New Age Caravans has added its fourth new dealership in just eight weeks, taking its total network around the country and across the ditch (in New Zealand) to 16.

Speaking about the roll out of its fourth new caravan dealership, Dealer and Business Development Manager at New Age Caravans, Shane Holloway said: “Between the first of July and the first of September, we’ve had four dealerships open across three different states.

“Customers can now buy and service their caravans locally in Griffith and Nowra in New South Wales, Darwin in the Northern Territory, and Bundaberg in Queensland.

“New Age Caravans was already a strong and well-established brand in the RV market, but since the Walkinshaw Automotive Group acquired the company, interest from businesses wanting to sell our caravans has increased.

“In some cases, we’ve seen existing dealers relinquish other licenses to join our network and only sell New Age Caravans.”

Because New Age Caravans only sells its product through its own network, the company said it had been working hard with the selection of its dealerships to ensure they offered the best opportunity for the business.

“We only manufacture and sell our caravans through our own dealer networks, so the past 12 months has been spent carefully identifying areas where dealerships would be best placed.

“For example, before we opened our new dealership in Darwin, the next closest was either Townsville or Port Headland; we had no representation in the top end.

“Our new locations give us the opportunity to reach more new and existing customers around Australia.”

Customer focus and experience was highlighted as a key focus and New Age Caravans said it wanted customers to have the same experience no matter which of its dealerships they visited.

“We’ve been working closely with our current Australian and New Zealand dealerships to equip them with the tools and training necessary for them to be one-stop-shop experience centres where customers can get everything they need for their caravans,” said Holloway.

In addition to expanding its network, New Age Caravans has announced an OEM arrangement with Redarc Electronics – the first of its kind in the RV industry. The agreement will see New Age Caravans dealerships able to provide aftermarket accessories installations.

“REDARC is an Australian manufacturer and supplier of electronic components to the RV industry, and our relationship gives us direct opportunity to their products and will allow us to bring aftermarket fitments such as electric brakes, in-house. For our customers, that means they’ll be able to have aftermarket fittings done onsite at our dealerships, and they won’t have to find another supplier. This will provide our customers with a better buying experience, and when they leave with their new caravan, everything will be ready to go,” Holloway said. 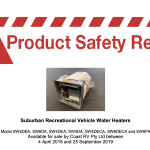 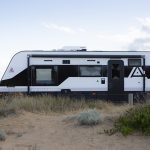