THIS MIGHT BE A PERSONAL QUESTION BUT, IS YOUR VAN OVERWEIGHT? 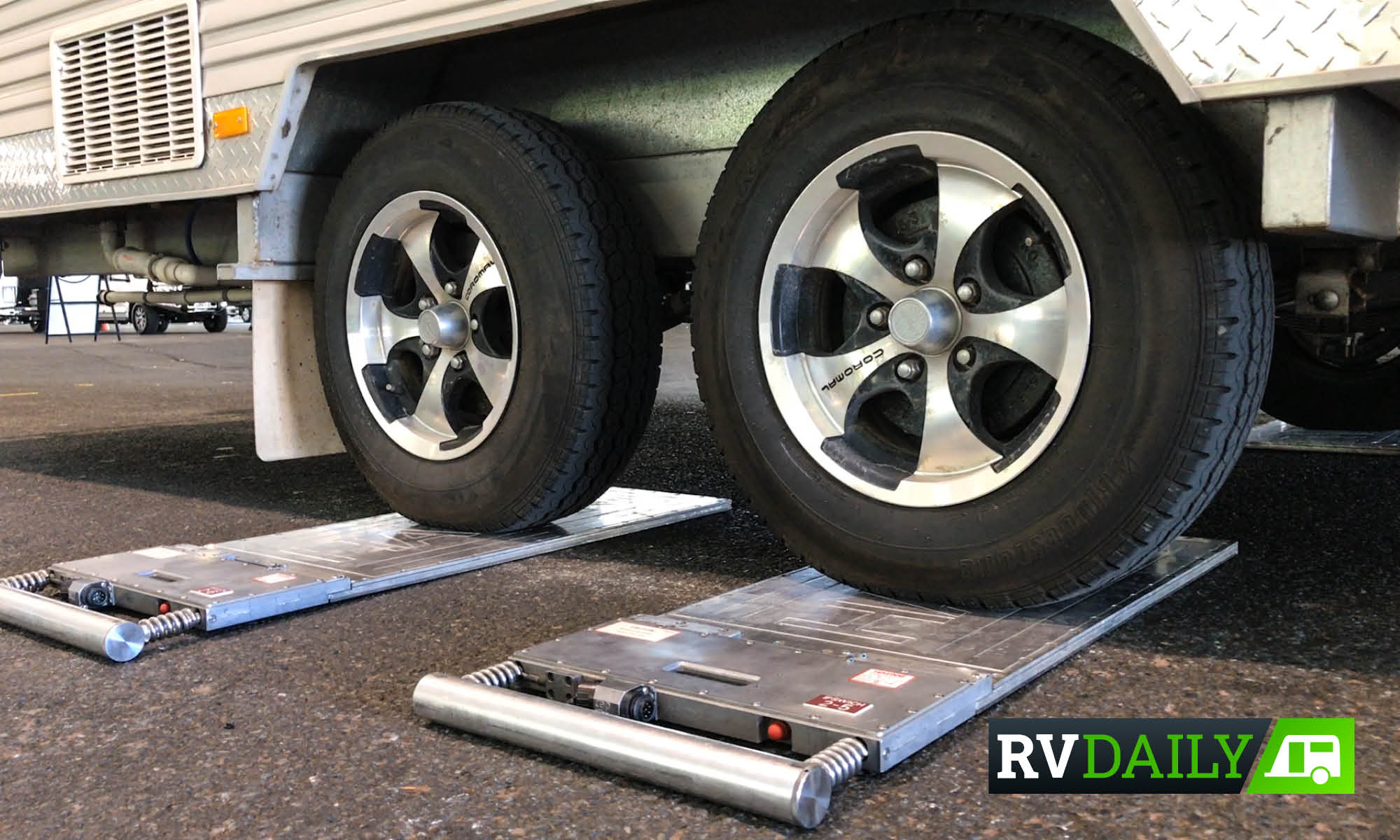 How would you know? Have you ever checked? Certain state industry bodies are on hand to help you find out

There are a lot of jokes about Queensland being behind the southern states. We may be convinced that the curtains will fade with daylight saving but we don’t like being overweight. And the only way to check that is to drive onto some scales.

Many of our vans are overweight. Okay, and some of us may be too. The state government has been working with Caravanning Queensland for three years helping van owners find out if their vans are overweight and what they can do about it. It all started when a Queensland Transport official and keen caravan owner saw that there was a potential problem and came up with a way of providing others with a solution.

Recently, Caravanning Queensland in conjunction with the Dept of Transport and Main Roads weighed the 1000th van in their ongoing program of free safety checks. Not only are the weights of vans and vehicles checked, other areas such as gas fittings are also inspected. It is surprising how many issues are found. Don’t worry though, there are ways of correcting some of the issues on the spot. Fines are not handed out. The focus is on solving problems and ensuring safety.

Queensland is actually ahead of the game is this area. Although caravanning associations in other states have started conducting safety check days (see page 86), their respective state governments have not joined the party by assisting with personnel and equipment. This looks like it may change with officials from other states visiting the Queensland safety check days to gather information. It is yet to be seen if this interest turns into action south of the state border.

The two main concerns with a van being overweight are the legalities of how that could affect insurance claims, and the fact the weight issues create a safety issue contributing to an accident. Both are legitimate concerns.

Not all vans are overweight but many are. Their owners were often surprised at how much over the plated tare/gross weights their vans were. As one van owner put it, “When we drove in we were illegal. We’re overweight”.

It’s one thing to find out that your van is overweight but how do you solve the problem? Although one could joke about not filling the water tanks, there are some very real issues here. The beauty of the safety check days is that there are experts on hand that can often provide solutions on the spot.

In Queensland, a trailer may be reverse engineered and the structural components checked against Australian design rules and Vehicle standards rules. In some cases, a new higher rating could be applied to the particular trailer with certification and a modification plate attached to the trailer which supersedes the manufacturer’s plate. This was possible in a number of cases that were observed on the safety check day.

Another issue that is not uncommon and discovered on these safety checks is that some of the gas installations are non-compliant. This can occur at initial manufacture or at a later stage when modifications are made. If you have electrical wires zip tied to your gas lines, your van is probably non-compliant.

In one case, a fridge was found to have been installed incorrectly at the point of van manufacture and the owner had experienced problems from the beginning. They were planning to buy a new fridge, but staff from Dometic who were on hand at the safety day found the installation problem and explained how this could be rectified so that the existing fridge would work as it should.

Other issues identified were bike racks that extended too far from the back of the van, tow-ball weights being too high and weight distribution issues in the van due to how it was packed. Often, additional modifications such as satellite dishes and extra water tanks can take a van over its original weight ratings. Everything that is added aftermarket goes into the weight total.

It is not only the vans that are often overweight – some of the tow vehicles can be found to be over their gross vehicle mass (GVM). Bullbars, roof racks, extra fuel tanks, dual batteries and packed items such as fridges and generators all have to be added to the original tare weight of the vehicle. When passengers are included, it is not hard to exceed the vehicle’s GVM.

All the van owners interviewed found the safety check day was a positive experience, even though many had issues identified. They would rather know about these, rather than pretend they didn’t exist. In many cases these were solved on the day with either a certification process or people to contact that could sort out the issues. In some cases, it was merely a case of packing differently.

It would be great to see caravan associations, motoring bodies, government departments and suppliers work together to expand the safety check days across other states. It’s nice to see that Queensland can lead the country in helping caravan owners, even though they may get out of bed an hour later.

In Victoria, caravan safety awareness took a giant leap forward in January 2017 when Sergeant Graeme Shenton, as part of a Christmas road blitz, ran an operation to weigh caravans, campers and boat trailers in the Gippsland township of Newmerella. That day marked the first official operation conducted by law enforcement anywhere in the country that specifically targeted caravanners and other heavy trailers, and saw 71 vehicles pulled over and weighed on portable roadside scales by members of the police and Vic Roads. Despite more than half of those weighed being overweight in at least one category (ATM, GVM, GCM or Ball Weight), no fines were issued. This exercise was run to educate and raise awareness of the issues facing all caravanners and their requirement to comply with the law.

That event was publicised nationwide on social media, particularly on various caravan and camping Facebook groups, reaching an audience estimated to have exceeded half a million readers. Such was the public interest, Mr Matt Sutton, who runs Everything Caravanning and Camping Facebook group, teamed up with yours truly and Sergeant Shenton to run two weigh-in events in Mt Gambier (South Australia). These events attracted the attention of the Caravan Industry Association of Victoria (CIAVic) who, themselves, had been planning to conduct caravan safety check events similar to those run in Queensland. The group got together over subsequent months to combine resources and organise the inaugural CIAVic safety checks event that took place at the Melbourne Leisurefest during October 2017.

The safety inspections went beyond just weighing RVs. Representatives from the Caravan Trade Industry Association of Victoria, Everything Caravan & Camping, Victoria Police, Vic Roads, RVeeThereYet, Energy Safe Victoria and Victorian Building Authority worked with industry representatives to give caravanners and RV owners complete safety inspections of their RVs. These checks were performed on all aspects of the vehicles including electrical and gas systems, correct set-up of tow couplings and weight-distribution hitches, as well as an overall caravan inspection. Advice was given to participants to assist them with addressing any issues and some remedial repairs were made on the spot to address serious safety concerns.

Over the two-days there were 20 RVs that had full inspections completed. Participants were also surveyed following the event with all advising that they were very satisfied with the inspections and they would recommend the Caravan Safety Inspection Program to others, highlighting the value and service the customers received from all parties.

Mr Rob Lucas, CEO, Caravan Industry Association of Victoria (CIA VIC) said, “We were extremely pleased with how our inaugural free safety inspection days progressed and the valuable partnerships we have established for this program.”

It’s important to note that while police and other authorities were present for these checks, no fines or infringements were issued for any non-conformances. The object was to inform participants of any issues they had and to offer advice on how to remedy those issues.

Hayward Walton, whose caravan was inspected on the day, was extremely appreciative of the event saying “The candid comments, factual information and no crap advice was the best I’ve had in 40 years of caravanning.”