Macca’s Useless Info: Hi-viz vest? Be irresponsible not to 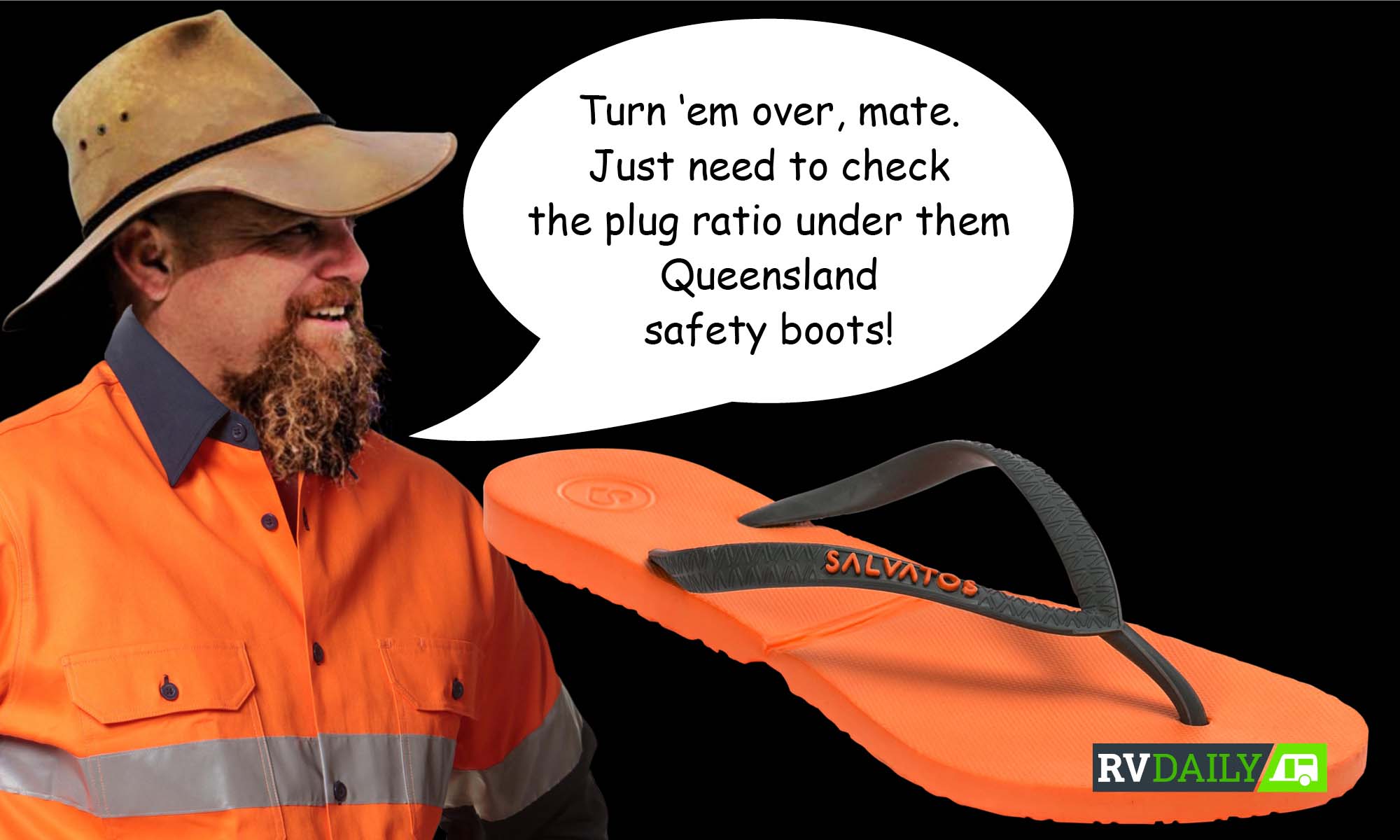 I was recently challenged by a viewer who had witnessed me deflating a tyre on telly with my thongs on. I’ll complete telling you about the confrontation after I set the scene of my offence…

It was a beautiful spring day, I’d just completed a nice drive from Hervey Bay followed by a leisurely cruise across to Fraser Island on the ferry. I was wearing a pair of shorts, a shirt (blue, of course) with the sleeves rolled up (of course) and a pair of thongs. We launched off the ferry to a magnificent day, just the kind you’d expect from Fraser Island. The birds were singing, the sun was pumping a high-twenties golden glow all over us and the director chimes over the UHF, “pull ’em up in a safe spot and we’ll film you dropping some pressure”.

Now bear with me as I paint the other picture for you. It’s a cold, miserable, rainy day in Melbourne, I’ve pulled into a servo to fuel up on my way back from a job when a Range Rover pulls in on the opposite side of the bowser to me. A portly chap with a waxed moustache lumbers from the driver’s position; he is wearing an adventurer’s shirt, long sleeves (rolled down for maximum sun protection). My new friend’s head is covered by a broad-brimmed cap with a flap on the back to protect his neck from the harsh solar attacks and he sports a pair of long trousers with more pockets and zips than an astronaut on a spacewalk – this man clearly means adventure business.

The moment my newly self-appointed safety advisor’s steel-capped boots gripped the service station concrete, he recognised me and let it be known with a nice audible “arrrrrrrr”. As he removed his leather rigger’s gloves from his left-hand calf pocket and began to put them on to protect his hands from the evil fuel he was about to handle, he commenced my air down debrief and safety lesson.

He kicked off his introduction with not a hello, but a “I’m surprised you’re still alive”.
To this, I replied: “Really? I don’t remember seeing you in the pub last night, when I lined up all the bistro tables, hit ‘em with some washing-up liquid and executed a perfect carrier landing in me jocks!”

He shook his head, looked me in the eye and said, “I’m talking about the time you tried to take your own life on television using compressed air”.

I had nothing, well nothing but a shoulder shrug and a “huh?”

Now I don’t have time to go into details, but I’ll give you the short version: apparently, compressed air is dangerous (and it is but I’m not sure how many people have been struck down by 34psi) and my playing around with it with thongs on sends a very dangerous message. If all you lot get out there in your thongs and let the wind out of your tyres on the same day, the doomsday preppers may very well get their wish.

I showed Safety Sam how much I was absorbing what he was teaching me with a dopey “what?” And he continued. Not only was I risking allowing compressed air to enter my blood stream through my unprotected feet, I was also at risk of snake bite, spider bite, splinters, slips, trips and falls and, of course, crushes.

I could have talked to this rocket scientist all day but I was a busy man so I wrapped it all up with an explanation of what he had missed that covered off all his concerns: “Sorry old mate, I’m touched with the knowledge of your concern but what you failed to pick up on that protected me from all of those high-threat risks that clearly kept me alive that day was that those thongs were double pluggers. You have a ripper day!” And with that, I jumped in my ute and drove away.

Righto, I know we need to do things safely and I know it’s a different world today than what it was 20 years ago, and I agree, we probably needed to refine a few things, but seriously? You can do what you like but me, I’m going to kick my boots off at every opportunity, I’m going to feel the grass or sand or dirt under my feet every living moment I can. I’m going to keep ‘earthing’ myself, as I call it, at the risk of a splinter and I’m going to keep smiling while I do it and if you think that’s dangerous you can keep watching me do it and I’ll bring a little excitement to your Saturday arvo in your lounge chair while you watch me do death-defying stuff.