There’s typically quite a big difference between a campervan and a motorhome. Well, not according to Knaus-Tabbert’s new reveal. The German RV experts have continued to up their game, this time with the launch of the brand-new Volkswagon T6.1-based Tourer CUV (caravanning utility vehicle). According to Knaus, the CUV “combines the best of both worlds in a new class. As manoeuvrable as an urban-class vehicle when on the move, as spacious as a fully-fledged motorhome for up to four people when stationary”.

What we know about the Tourer CUV

The full specs are yet to be revealed, but here’s what we know so far.

The CUV is equipped with a full kitchen and a fixed bathroom with an expanding shower room and a toilet. Despite its compact size, it can sleep up to four people with plenty of storage and space.

The main bed is found at the rear of the vehicle’s interior. Fold the bed out and the CUV reveals an expanding wet bathroom. An option for a dry bathroom is on the cards too, with just a few simple steps. I don’t know about you, but I like the idea of a customisable living space.

Despite its claims to bridge the gap between the camper and motorhome, the Tourer surprisingly sits slightly short of a traditional camper. The Tourer is 588cm long, while most CUV campervans measure a length of at least 600cm. While you might wonder how this creates a motorhome-like environment, its easy-to-drive length is certainly appealing for the city dwellers among us.

The real game-changer, which makes this vehicle more than just a camper, is the installed pop-up roof. Fully extended, it offers an additional 1.9 metres worth of height to the vehicle’s living space. The design includes the option to slide another double bed here, creating a bedroom-like feel.

Knaus has additionally incorporated flare sidewalls to the CUV. Offering an extra three cm to the interior, when you combine this with the pop-up roof, you can begin to see how the luxurious space of a motorhome comes to life in this compact camper.

The full specs of the Knaus Tourer CUV are said to be announced in August. For now, I’m pretty impressed with what we’ve seen. Let’s hope it doesn’t break the bank; I wouldn’t mind taking this beauty out on my next road trip.

Read next: What’s on in July? 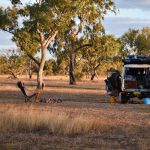 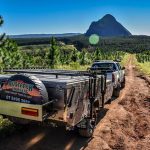