How to handle being overtaken safely, with a caravan 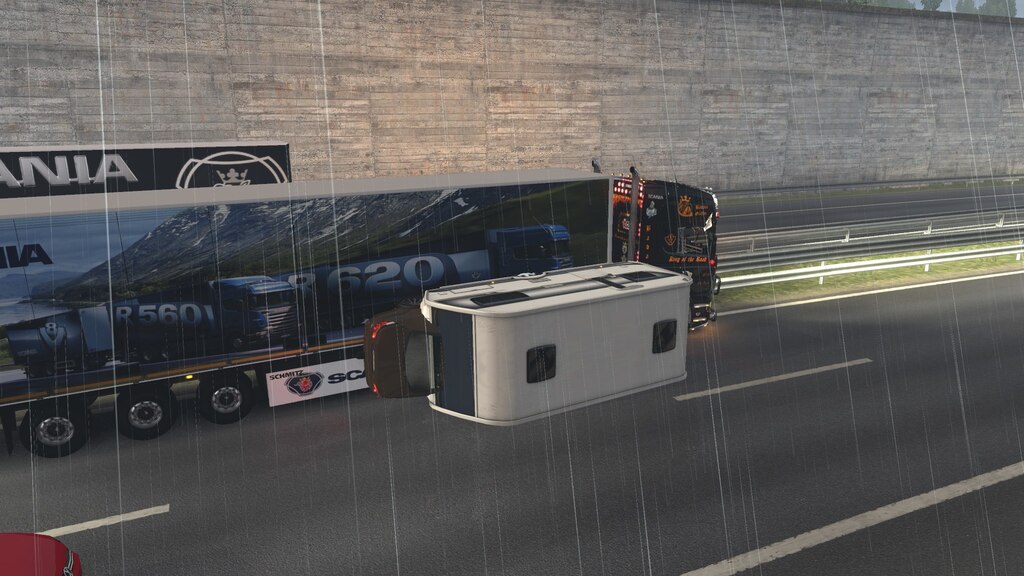 The feeling that the tow vehicle and caravan are moving around seemingly uncontrolled when a large vehicle overtakes is unnerving. Here’s everything you need to know about overtaking (and being overtaken) when towing a caravan.

If you can remember back to your science lessons, I’m sure at some time someone mentioned a Dutch chap called Daniel Bernoulli who lived in Switzerland and had a bit of a thing for maths and fluids, and I don’t mean beer… although he might have done, I just don’t know.

To cut a long story short he came up with a principle, which basically says – well, this is my simple version – air (or fluid) moving faster on one side of an object than the other will create a force due to differing pressure. Accelerate the gas or fluid and the pressure drops relative to the other side of the object.

The best demonstration of this is an aircraft wing. The shape of the wing causes air to move faster over the curved top surface than the flat underside of the wing; therefore, the pressure above the wing is lower. In essence, the aircraft wing is sucked up from above and pushed up from below. (Okay, if you are the Big Bang’s Sheldon Cooper you will have a better explanation.)

WHAT’S THIS GOT TO DO WITH BEING OVERTAKEN? As the pressure is lower, the rear of the caravan is drawn towards the overtaking vehicle. For the moment we will only consider single-axle caravans. The ‘pivot point’ is effectively the axle. You know how easy it is when the jockey wheel is down to turn your caravan around by pushing on the rear side corner – well the same thing is happening here.

The rear corner of the caravan is being drawn (red arrow) into the low-pressure airflow. This has the effect of turning the caravan and applying a side load (red arrow) on the towball, which tries to turn the vehicle.

So as an overtaking vehicle draws level with the rear-end of the caravan, the ‘feeling’ of being pulled or sucked in towards the other lane begins. If you haven’t been keeping an eye on your mirrors for overtaking vehicles, this is when people new to towing start to get a little nervous. 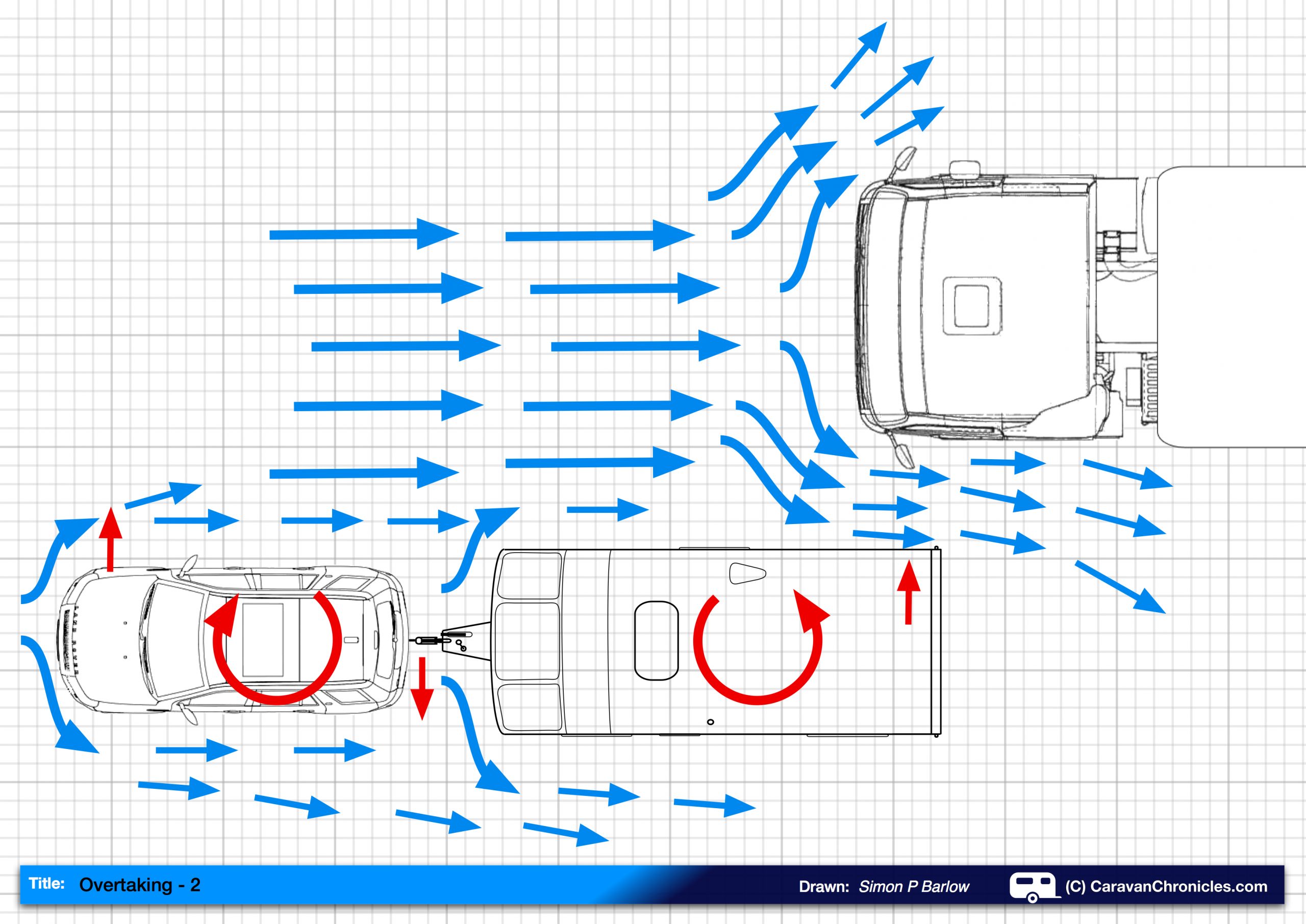 As the overtaking vehicle draws level with the axle of the caravan, the forces are reduced. This is due to the length of the ‘lever’ being reduced: right now, you would find it hard to turn your caravan by pushing on the side just behind the wheel, for instance. And the effect it has on the tow vehicle is also reduced. 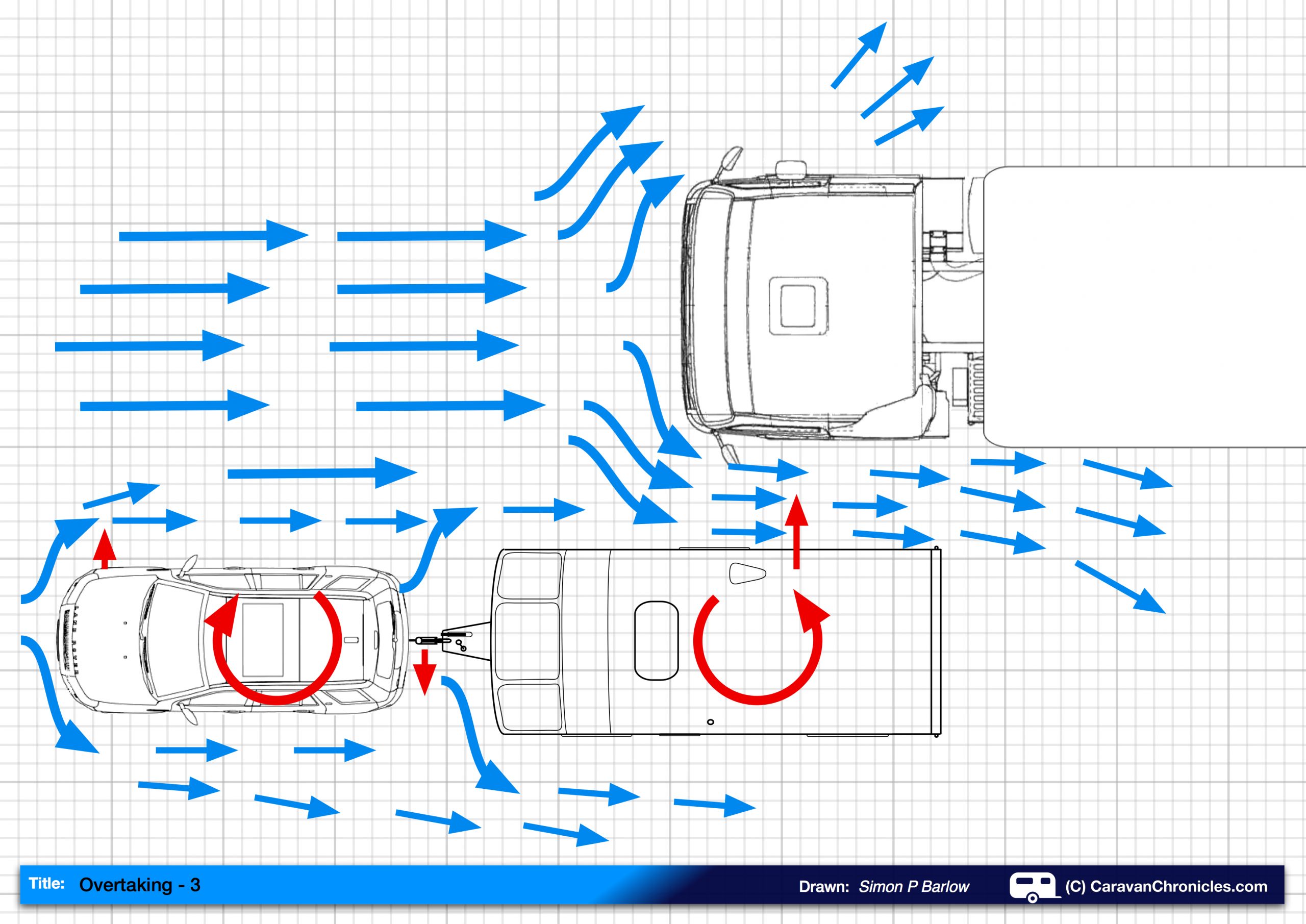 Now, as the overtaking vehicle still moves forward, the low-pressure effect is still there, but this time it is acting in front of the caravan’s axle and has the opposite effect. It draws the front of the caravan in, so applying a force tending to turn the vehicle away, although it has less effect.

This is the second part of making a novice tower nervous. By now, the driver has usually applied corrective steering input to move away from the vehicle after finding themselves ‘drawn towards’ the overtaking vehicle, the force now being applied amplifies this, and they find that they move over in the lane a little quicker than anticipated. WHY DOES IT HAVE LESS EFFECT?

If you look at the diagram, you can see that the airflow is still faster along the length of the gap between the two vehicles, so there are still some forces acting on the rear of the caravan. However, the air between the two vehicles is spilling out of the gap over the roof of the caravan and overtaking vehicle, slightly reducing the pressure difference. By the time the front of the overtaking vehicle gets level with the gap between the towing vehicle and caravan, most of the effects are over. Towing vehicles tend to be more aerodynamic than caravans and have a lower roofline allowing the faster-moving air to spill out more easily and reducing the overall effects. 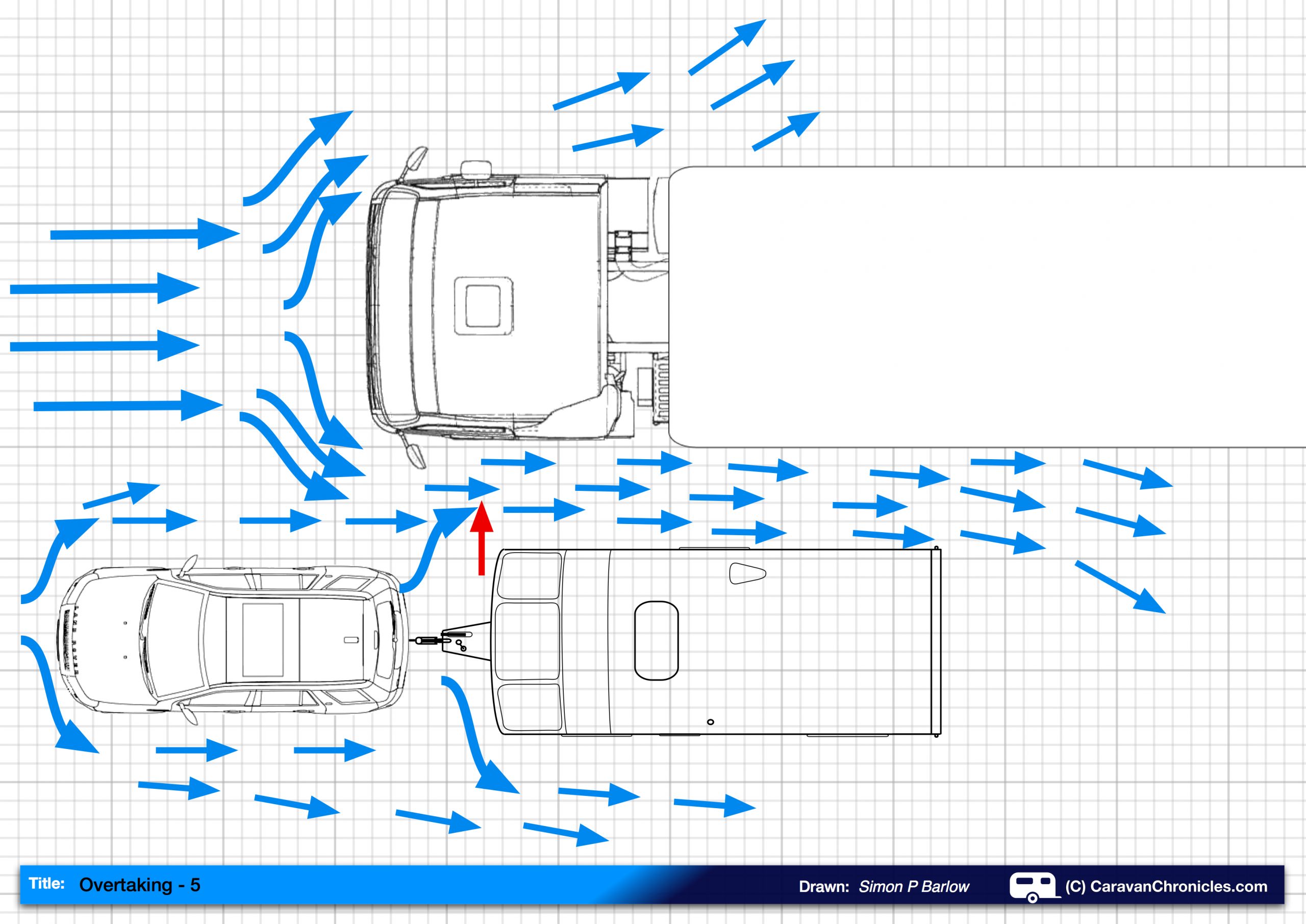 Now, no doubt you have heard, “twin-axle caravans are more stable”. Well, when it comes down to being overtaken it’s probably correct. A single-axle caravan resting on its wheels and jockey wheel is fairly easy to turn on its own axle just by pushing on one of the corners.

Trying to do that with a twin-axle caravan would be almost impossible unless you are a person that turns bright green when getting slightly annoyed. It’s the same when being overtaken; the forces in play are generally not large enough to have much effect on a twin-axle caravan.

With fifth-wheel trailers, the forces are still there, but as the hitch (pivot) point between the tow vehicle and trailer is on, or in front of, the centre line of the rear axle of the towing vehicle it is generally unaffected.

Caravans that have a longer overhang behind the rear axle will tend to magnify the effects and tow vehicles that have a longer rear axle to towball distance again will feel the effects more. Different vehicles overtaking will exhibit different characteristics. An articulated lorry is likely to be passing you around 5 to 10 MPH faster, but a large commercial van – (Ford Transit, Mercedes Sprinter, etc.) or coach could be passing you with a 20 MPH or more speed difference and will have just as much effect or more due to the greater speed even though it’s lighter in weight.

HOW TO REDUCE THE EFFECTS OF SWAY WHEN BEING OVERTAKEN

Keeping an eye on your rearview mirrors is essential. Knowing exactly when a vehicle is going to overtake will allow you to prepare for the sideways movement. Increase the gap by moving to the left in your lane to reduce the effects. Easing off the accelerator so that the overtaking vehicle passes slightly quicker to will also help.

For people new to towing, the big thing is not to overreact and oversteer. Knowing what’s happening when you are being overtaken is the first step in safer towing.

All this applies when you’re overtaking too. If you overtake a large vehicle, the effects are just the same. In Europe, where towing speeds are higher, then you must be extra careful. I suspect, although I don’t have any hard evidence, that this event was caused by the driver of the tow vehicle being caught out when passing the truck and possibly reacted by oversteering.

Video (c) by the original poster/YouTube.