Have you heard? Silo art is all the rage 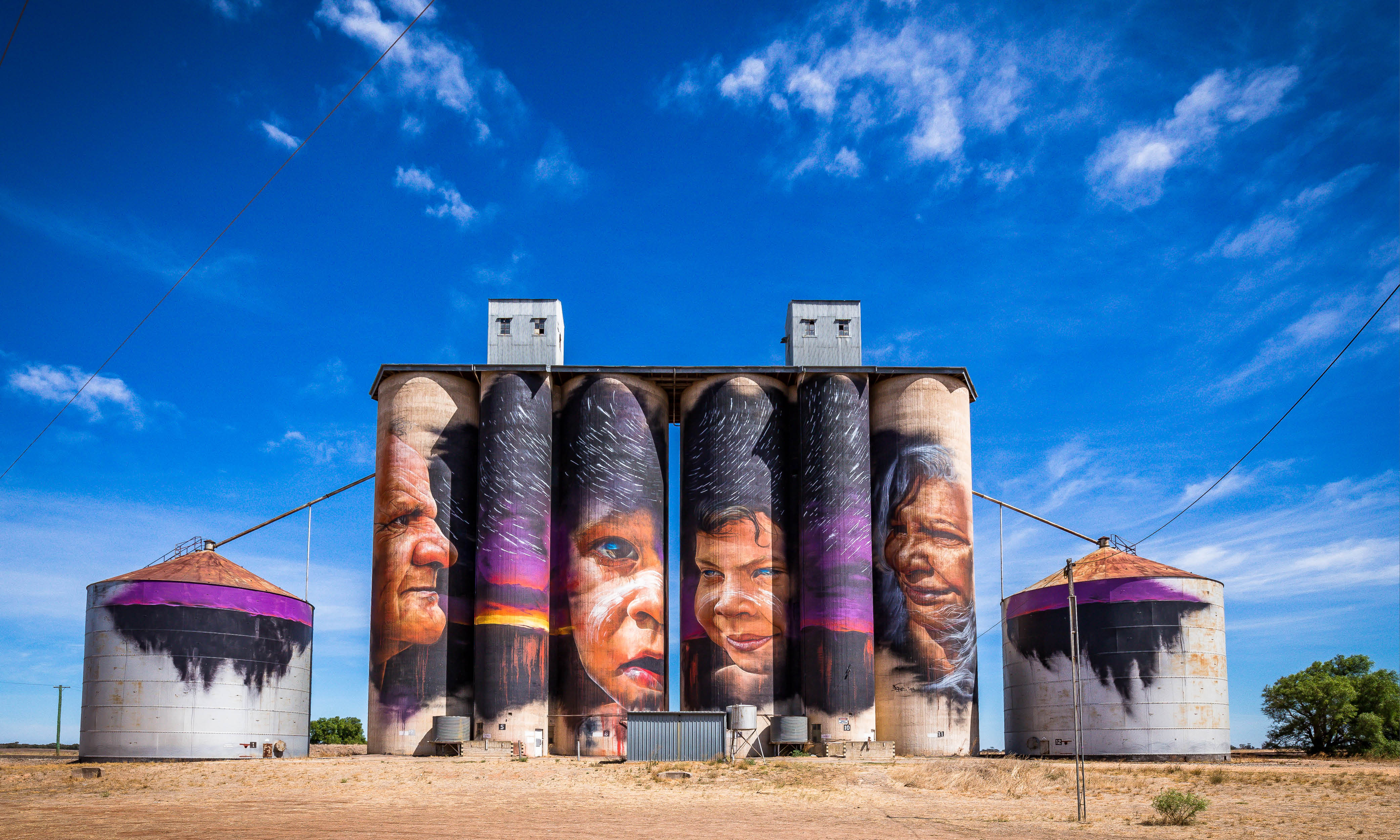 Who would have thought slapping some paint on an old wheat silo would become a craze? Vandals have been tagging them for decades, but now authentic artists are volunteering their time and skills to create some magical works.

The Yarriambiack Shire in Western Victoria has been working on ways to improve the local economy by increasing tourism and tourist dollar spend. They started by creating several superb free camping sites and establishing a number of RV friendly towns. But more was needed to give visitors a reason to visit the region, so they created Australia’s largest outdoor art gallery.

CLICK HERE TO READ THIS TRAVEL ARTICLE IN OUR ONLINE MAGAZINE

Stretching over 200 kilometres, the Silo Art Trail provides an insight into the Mallee culture and was first conceived in 2016, when the Brim silo showed how successful the concept would become. What was initially a small project by the Brim Active Community Group, GrainCorp, Judy Potter and artist Guido van Helten, has morphed into a phenomenon beyond expectations.

For me, this trip is the first in my dad’s campervan. He bought the converted Toyota HiAce LWB a few years ago but she hadn’t been used much in recent times and “needed a good run”. I was happy to take her for a spin and with a small amount of arm twisting, I convinced my dad to let me borrow her for a few days to explore Yarriambiack Shire. Few of my trips don’t throw up an issue to test my patience and this one didn’t disappoint. The ageing batteries in the campervan were past their prime and the battery charger had died, so when I picked her up, the batteries were sitting at a mere 10.5 volts – bad news.

I borrowed the battery charger from my Prado and pumped charge into the batteries, getting them up to 12.2V before heading off. I also confirmed that the batteries were charging via the alternator, so hit the road knowing that powered sites were going to be my only viable option. Heading cross country from Cohuna to Hopetoun, I was lucky enough to score a powered site beside Lake Lascelles, one of the best free campsites in Victoria. As the sky turned purple, I enjoyed dinner by the water, washed down with a nice glass of red. The campervan was easy to set up – stop, plug in, set up a chair, done. The sleeping quarters were a bit cramped but after a long day on the road, it wasn’t long before I was rattling the windows with my snoring. Waking refreshed, I enjoyed a hot shower before cooking up some B&E sangas while the coffee brewed. The road north led me to Patchewollock and the silo on the trail painted by Brisbane artist Fintan Magee in 2016. Grain farmer Nick ‘Noodle’ Hulland stands tall on the thin silo, epitomising the Mallee farmer. The first part of the day is the best to view this silo as the sun highlights Nick’s features.

I decided to test the campervan’s capabilities and head out to the Snowdrift at nearby Wyperfeld National Park. The bitumen soon ran out and the dirt road guided me, corrugations my only bugbear. The ride is certainly harsher than in the Prado! After parking in the shade, I tried to climb to the top of the massive white sand dune that stretched before me. No matter how hard I tried, the sand, heated by the sun, was too soft and I kept sinking to my ankles without making any headway. Giving up, I enjoyed a sandwich before retracing my route back to Patchewollock.

The hamlet of Lascelles was the next stop where Melbourne street artist Rone has represented Geoff and Merrilyn Horman on the silo beside the railway line. Born and bred in the Lascelles community, the humble couple were selected as the subjects to forever watch over their hometown. I ran into a couple from Western Australia driving a 1959 Holden FC towing a beautiful teardrop camper-trailer, passing through on their way to Canberra.

From Lascelles detour to Woomelang and check out the inland carpet python painted on the wall of the general store. The mural was painted by street artist Andrew ‘Sirum’ Bourke to raise awareness for this critically endangered species. I also wanted to look at the free camping area at Cronomby Tanks. Originally constructed for the railway, these earthen dams have now been linked to provide a great spot to camp, fish or just enjoy a picnic – I enjoyed a Magnum ice-cream.

Arriving back in Hopetoun, there were no powered sites left (you must get in early), so I found a spot right along the shore and relaxed with a cold beverage. Alas, the batteries were too sick to run the fridge and so within an hour of being parked, the fridge shut down.

On waking, I checked the fridge to find a defrosted freezer and fresh food looking poorly. Thankfully there are plenty of great places to grab a bite as I explored the shire further. Bacon and eggs from the newly opened Hopetoun Café were enjoyed before heading to the nearby town of Rosebery. The Mallee Sunset Gallery occupies the white timber church on your right as you enter Rosebery; the silo is 200 metres further along on your left. When Kaff-eine began developing the concept for the silos, she decided to portray images that she felt personified the region’s past, present and future. This silo is best viewed in the afternoon.

Not far down the road is the original silo, located in the township of Brim. The first and possibly the most iconic, this artwork is best photographed in the afternoon and at sunset and is currently the only silo with night lights. The nearby campground at Redda’s Park on the Yarriambiack Creek is the perfect place to spend the night. 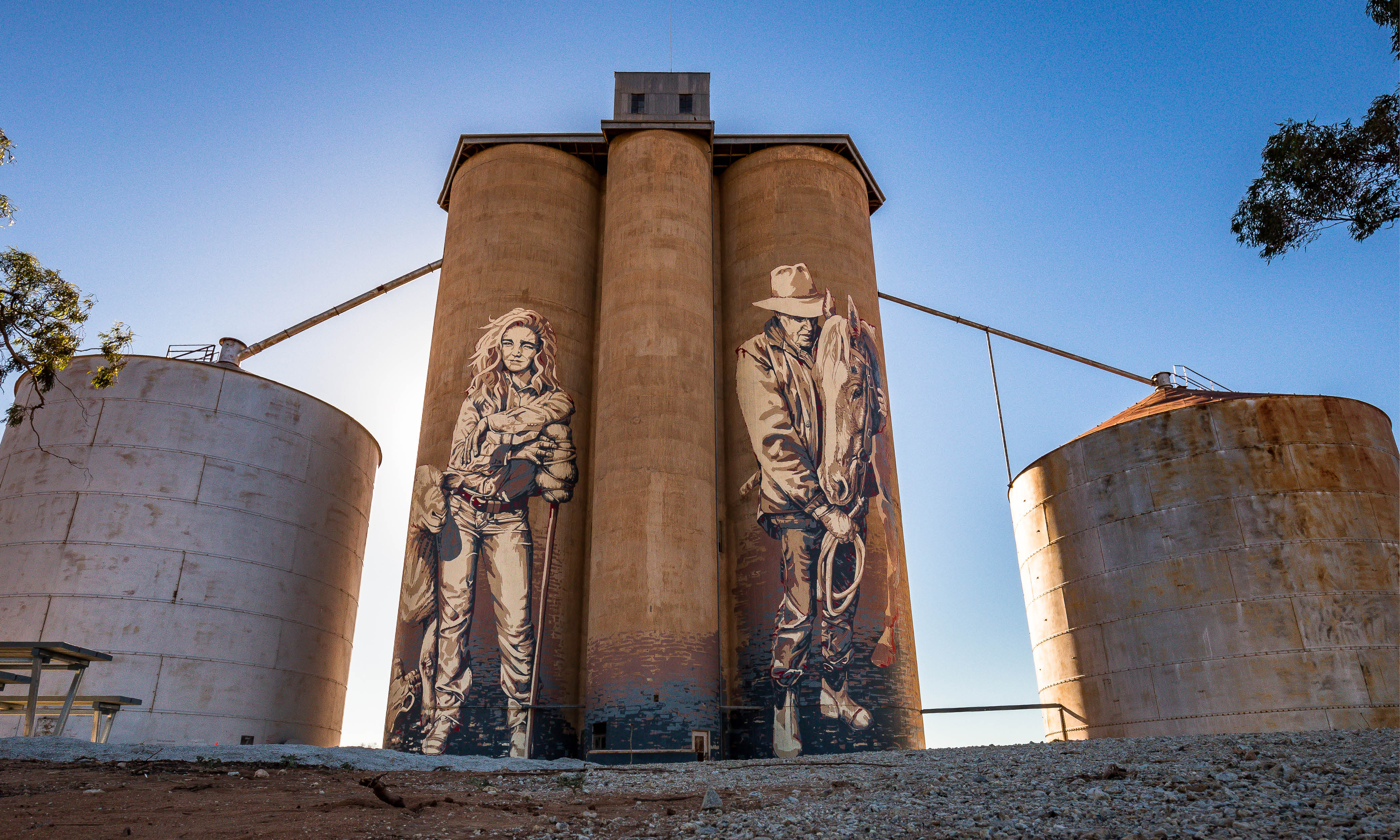 Warracknabeal is ideal to stock up supplies and fuel before taking the road towards Minyip. On the way, you will reach Sheep Hills, and by far my favourite and the most colourful of all the silos (pictured on the opening spread of story). Melbourne street artist Adnate’s portraits are symbolic to the local people, with Wergaia elder Uncle Ron Marks, Wotjobaluk elder Auntie Regina Hood and children Savannah Marks and Curtly McDonald towering above the plains. It is well worth taking a close look at this work, especially the children’s eyes.

Some of you may recognise Minyip as you pass through. Once known as ‘Cooper’s Crossing’, it was the town featured in the television series The Flying Doctors back in the 1980s. For a tenner, you can camp at the picturesque Minyip Wetlands and Caravan Park.

Just south of Minyip is Rupanyup, where Russian mural artist Julia Volchkova spent time before deciding on her muse. She discovered a close-knit community where sport plays an important part in bringing everyone together. She decided to feature local sportspeople Ebony Baker and Jordan Weidemann and highlight the role sport plays in binding a rural community. This silo is best viewed first thing in the morning. 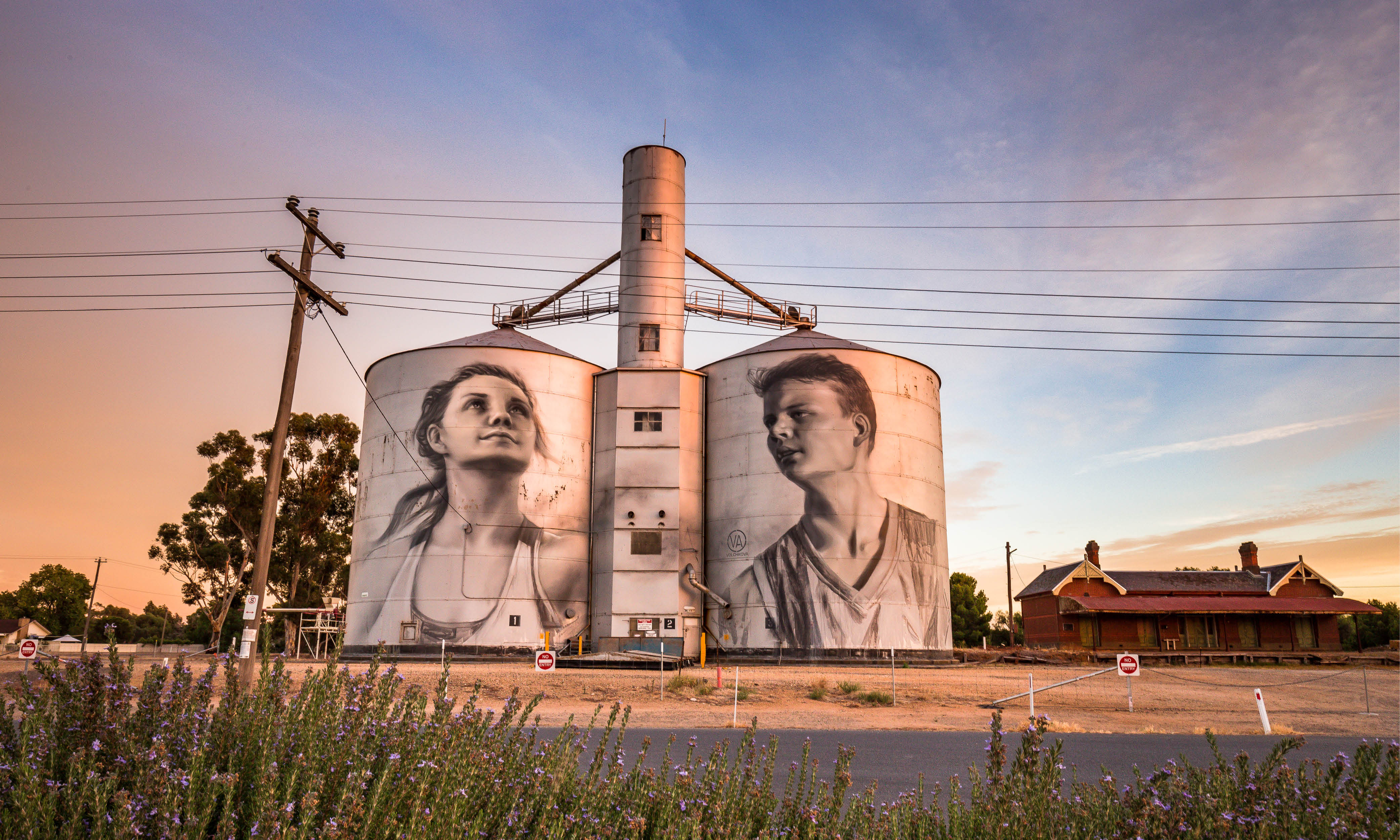 You will also find three more murals by street artist Georgia Goodie, two depicting firefighters. One is on the wall of the old shire building, the second on the wall of (ironically) a house that was burnt down. There is also a mural in the beer garden of the Rupanyup Hotel and I can recommend the cold beer and chicken parma. If you’re camped at Memorial Park, it is an easy walk to the silo and into town.

The highlight, and what a highlight, to this trip and one you must factor in when visiting the Silo Art Trail is the Murtoa Stick Shed. Head 15km west and you will reach the quaint town of Murtoa – I recommend a coffee and toastie from Stuff Ya Guts Takeaway. As you drive into town, just before crossing the rail line, check out the enormous shed on your left. This is the Murtoa Stick Shed and it blew my mind.

Constructed in 1942, it was used to store grain that couldn’t be exported due to World War II and was still in use up until 1989. Open to the public on the first Sunday of every month, you will need to hold your chin to stop your mouth from dropping when you walk in and see the 560 poles used to keep the shed standing. It … is … enormous! It used to hold 95,000 tonnes of wheat, is 270 metres long, 60 metres wide and 19 metres high and was built to sway.

That concludes the Silo Art Trail, but a little birdy has told me that we can expect more silo art to appear in the Yarriambiack Shire in the future, with up to 20 silos being the final number. Stay tuned.