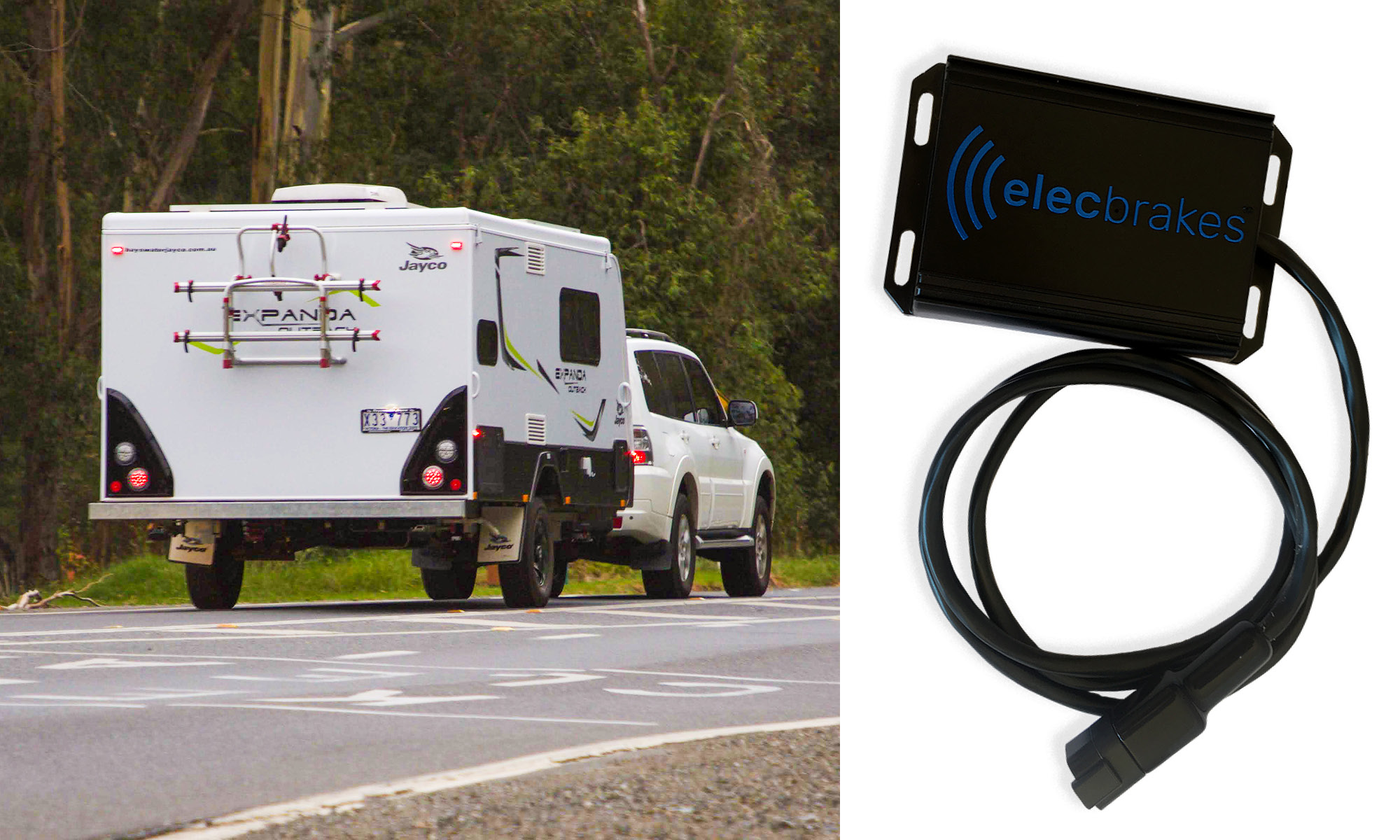 Every vehicle has two maximum towing capacities: trailers with brakes, and without brakes. It is popularly assumed that vehicles can tow up to 750kg without brakes, but that’s a maximum reached only by vehicles such as medium to large 4WDs, so car manufacturers often set lower unbraked limits, particularly for soft-roaders (think Toyota RAV4) and 2WDs. Any trailer above 750kg will need brakes regardless of the tow car, and over 2000kg the law – and common sense – says you’re looking at trailer brakes independently operated from those of the tow car.

CLICK HERE TO READ THIS REVIEW IN OUR ONLINE MAGAZINE

Our view is that independent trailer brakes are a very good idea for anything other than a small box trailer, regardless of the laws. Independent brakes really mean electric brakes, which means a brake controller. This is a device that detects when and how hard the tow car’s brakes are being applied, and applies the trailer brakes in proportion. Crucially, it also allows the trailer’s brakes to be operated without touching the tow car’s brakes, hence the ‘independent’ bit, which by the way, is the very best method to fix trailer sway as opposed to accelerating, which just gets you to the scene of the crash a bit quicker. This is all you see on the trailer, and the unit can even go inside a toolbox

Up until now, your average trailer brake system was a wired affair – a brake controller in the tow car connected to the tow car’s brake lights and electrical system, with the controller knob mounted somewhere on the dash. Installing a wired brake controller isn’t a difficult job, but it’s not a five minute effort either, and once done, not something you’d bother swapping from vehicle to vehicle.

Elecbrakes aims to change all that. Their brake controller is wired only to the trailer, and its settings are changed via a phone app (Android or Apple) carried in the tow car, which communicates wirelessly via Bluetooth to the brake controller, so no need to wire anything on the tow car. This means all the tow car needs is a phone running the Elecbrakes app, and the usual trailer electrics for lights, brake lights and indicators, as you’d have for any trailer.

The Elecbrakes system isn’t exactly dependent on the wireless connection though. The brake controller settings are only set by the app, so if the wireless connection or the phone fails then the trailer brakes will still operate at their last setting. There are some options with the Elecbrakes system you don’t have with a wired brake set-up, such as readouts of different voltages, time spent towing and time the brakes were on and off. Being an app-based system, there’s potential for more features like that in the future. 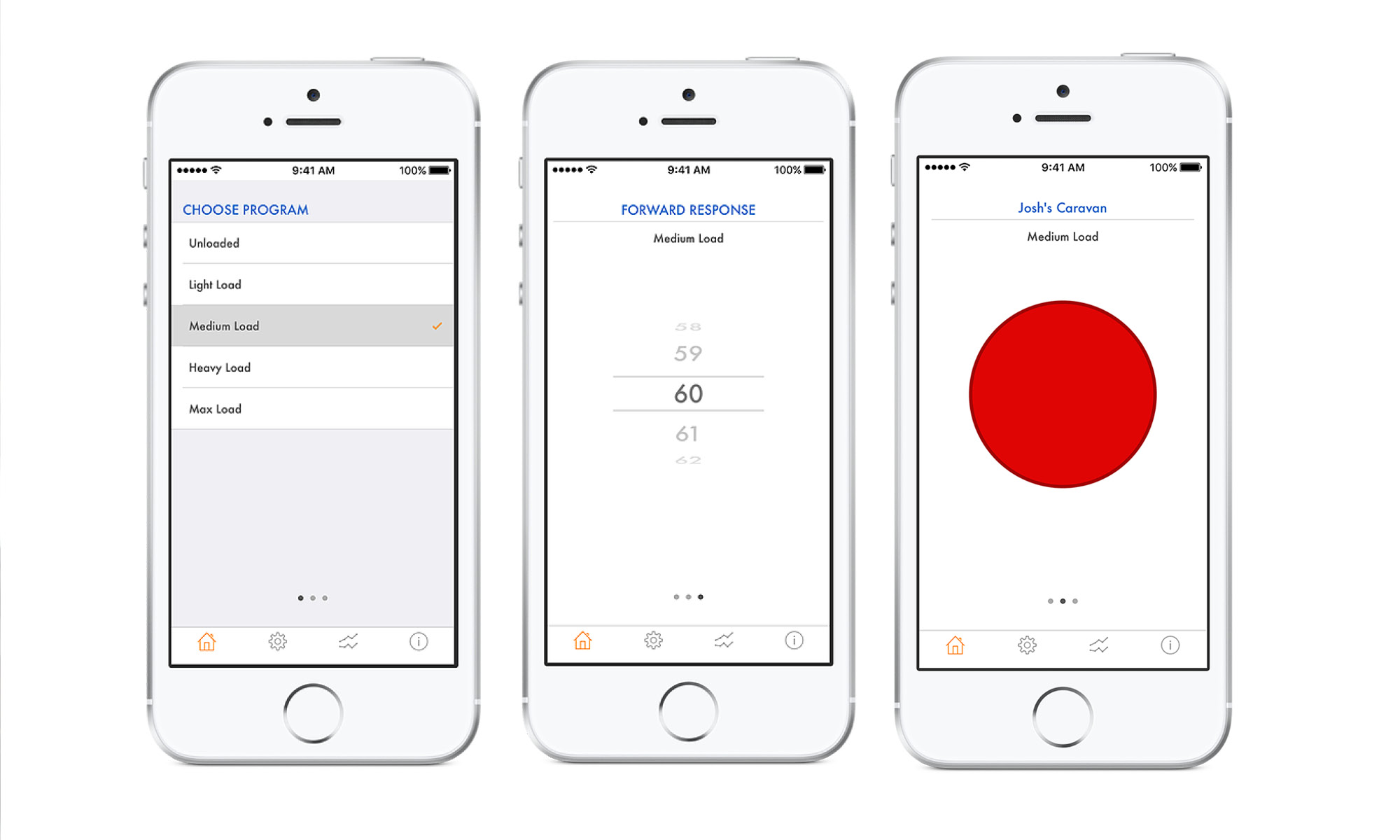 You can also pre-set the different profiles for different trailers, so one for your one-tonne camper, and another for your three-tonne mega-van. Or, different loads such as car trailer unloaded, or car trailer loaded, or different conditions such as off-road and on-road. I can see the point of those pre-sets, especially for inexperienced drivers, but I just prefer to twiddle my brake controller dial, which is less effort than a couple of taps. For example, when descending a long hill I’ll instantly dial up a bit more braking power for the trailer.

Now, what about using a phone while driving? That’s a big no-no these days, and for good reason. However, the Elecbrakes system is ADR compliant so long as the phone is securely cradled, and plugged into power. Personally, I’d want a dedicated phone as you wouldn’t want the screen to switch away from the brake controller if a phone call came in at the wrong moment. 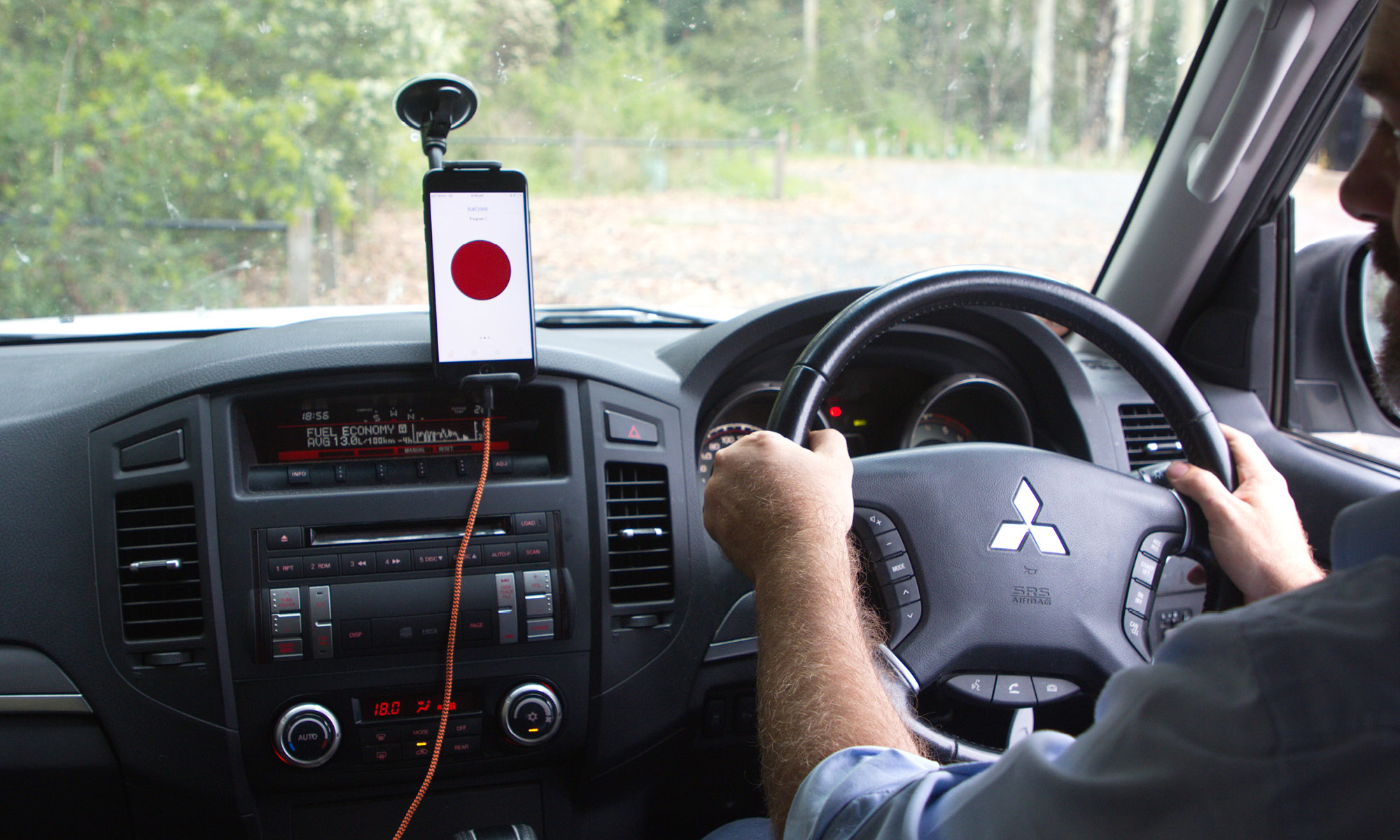 An example of the Elecbrakes app in a Pajero. The big red button is what you press to apply the brakes manually

We tested the Elecbrakes system and discovered it works just like a normal electric brake controller – tap screen and trailer brakes apply. Changing the sensitivity of the trailer brakes relative to the tow car brakes is easy and works just like a wired system. That said, there are a few differences in operation. First, you need a phone, so you’re tapping a touchscreen, not pushing a button. I don’t think this is ideal, as a physical button is easy to use without looking, whereas you need to look at a touchscreen to use it, and twiddling a dial is easier than swiping a screen – something I’ve come to learn over many years of testing new cars with and without touchscreen controls. 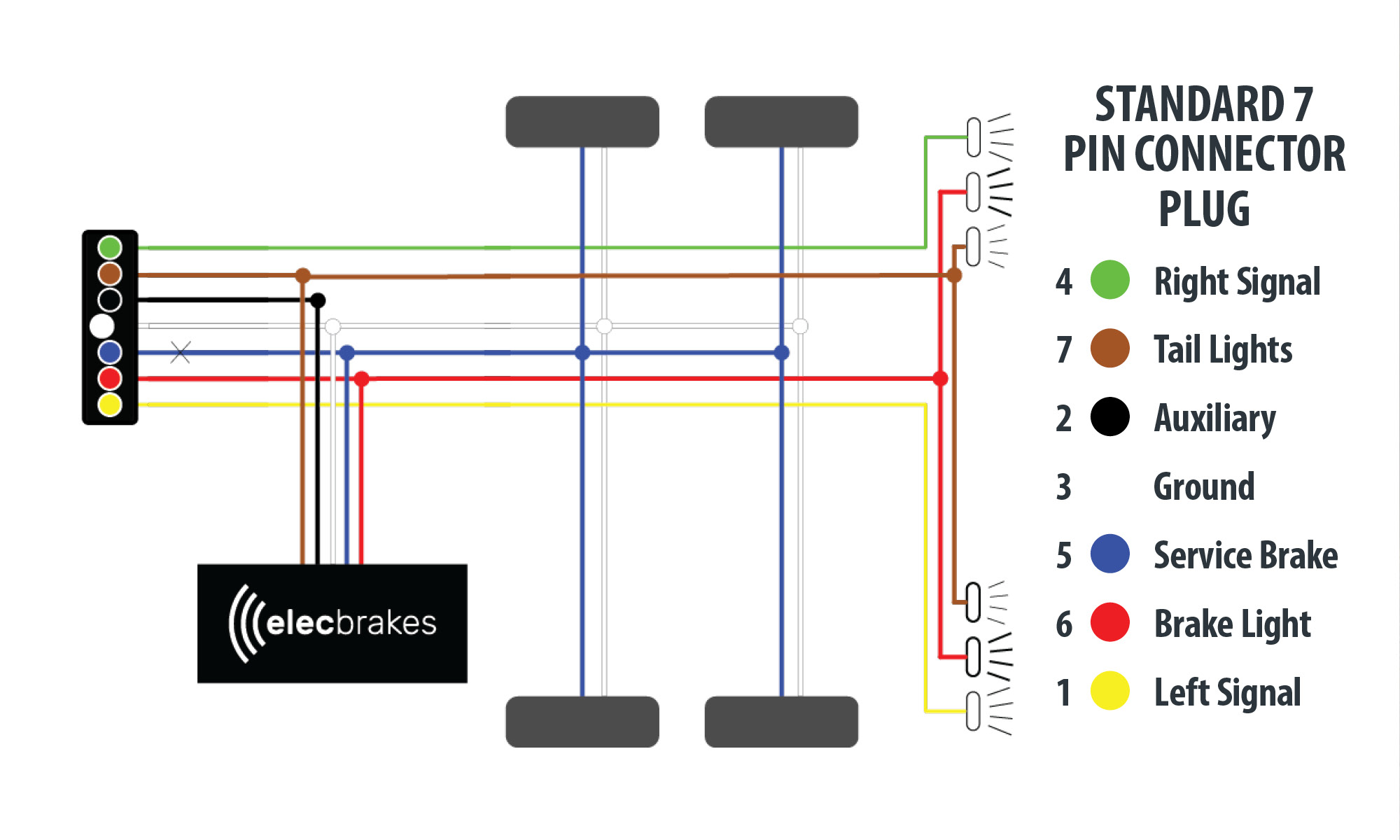 It’s also easier to stab at a button in the dash to apply brakes to deal with sway than to stab at a touchscreen. I also like to vary my brake controller sensitivity, for example, low when backing the trailer, medium at slow speeds and higher at faster speeds. Again, I find this easier with a physical dial than a touchscreen. That being said, Elecbrakes is currently developing a remote control unit which does away with the need for a smartphone entirely.

So when would you use Elecbrakes? I think if you’re going to do a lot of towing you may as well get a wired system installed and set up and done. It’s not that expensive and certainly doesn’t devalue a car. But there’s definitely a place for Elecbrakes, and that is when people without electric brake controllers need to tow heavy trailers but don’t want to invest in normal brake controllers. For example, a company that rents caravans, camper-trailers, car-trailers and the like, or has trailers towed by a variety of different cars and doesn’t want to invest in trailer brakes for any one car. The app has the potential to offer quite a few interesting controls and information for trailer towing, but it’s early days yet so development will be ongoing. It’d be interesting to see if the system could detect load and road conditions, and then automatically vary the trailer braking force so inexperienced towers always have their trailer set up right, or a little camera be paired with the smartphone to make hook-ups easier. Elecbrakes is worth keeping an eye on, and I think in time this sort of system will become the norm, not the exception. 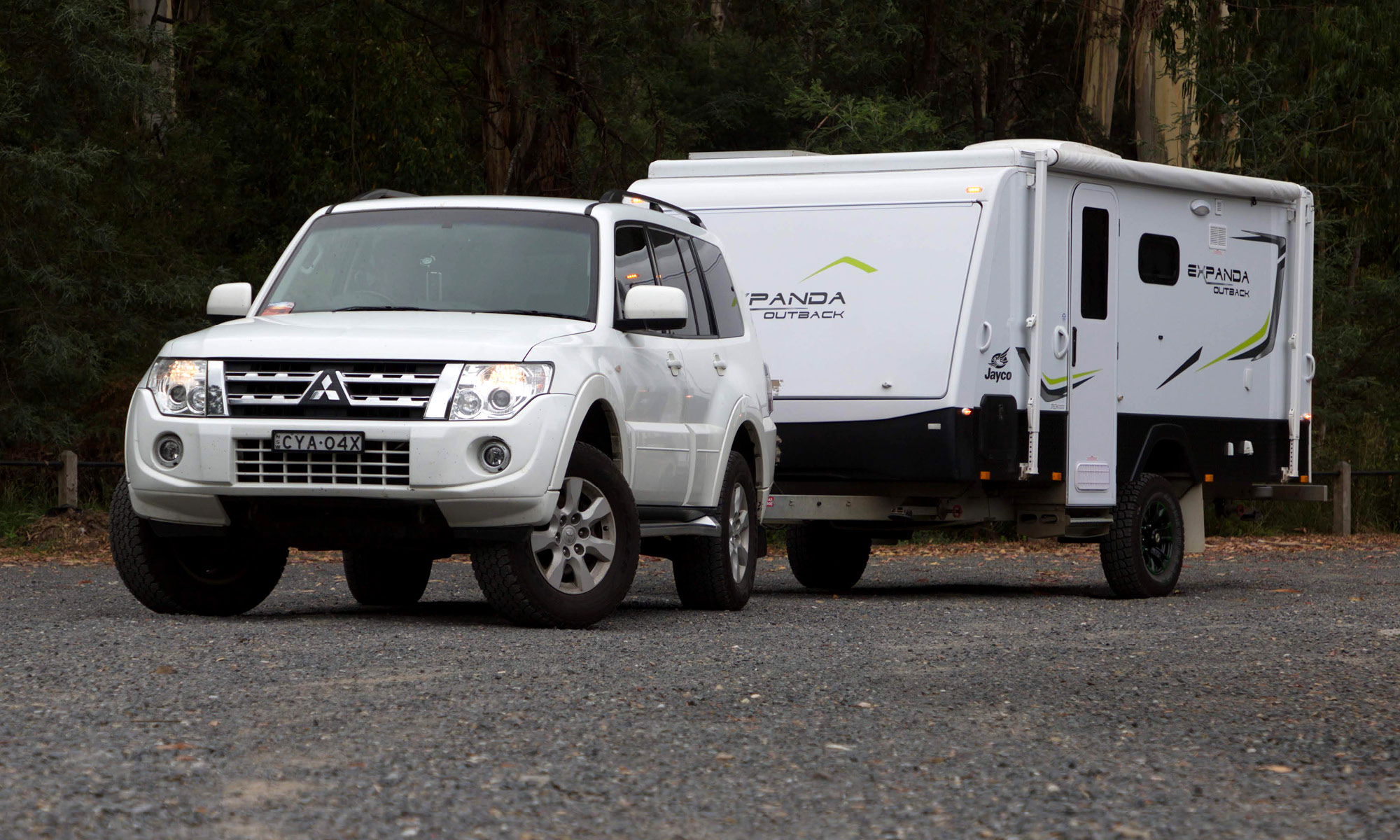 Elecbrakes uses the widely adopted Bluetooth 4.0, which has long-range capability and high connection reliability, so you shouldn’t experience any dropouts; even if you do, the system has been designed to continue operating