One of the most common questions on caravan forums and Facebook groups is “How do I plug my 15 amp lead into a 10 amp domestic power point?” While to most of us the answer to this would seem simple, the number of wrong and dangerous replies would suggest otherwise. Let’s set the record straight.

The problem with people handing out poor or dangerous advice is so bad that many forums and facebook groups now delete such posts mainly because these people who offer incorrect advice are not just putting other people’s lives at risk, but they are also, in many cases, openly incriminating themselves. In this article, we give you a basic understanding of the issue and the laws behind what you can do and what you can’t do regarding your caravan’s 240v mains power

In the old days, when we didn’t know a lot better, in order to get power to our caravan from a domestic household power point, it would be a simple matter of taking a regular 10 amp electrical extension cord, chopping off one of the ends and replacing it with a 15 amp plug. Job done. Almost everyone did it and no one thought anything of it. The problem with this setup is that the potential exists for the caravan to draw more current than the 10 amp power point, and the wiring behind it, is designed to cope with. An additional 5 amps may not seem like a lot but I can tell you that at 240v, a 5 amp load is enough to kill a human being. The potential for wires to melt and start a fire is a real possibility with this setup.

The other problem with this setup is that not everyone is familiar with how to wire 240 volt leads correctly, creating yet more potential for an electrical nightmare. The number of possible dangers that arise out of this one simple act is mind-blowing.

What are the risks?

According to the Australian Institute of Health and Welfare, between 1 July 2014 and 30 June 2016, a total of 1,065 people were hospitalised after sustaining an electrical related injury, and 55 people died as a result of electrocution or lightning strike. Almost half of the people hospitalised with an electrical injury occurred while the person was in paid work (497 cases or 47%), and a further 150 people sustained an electrical injury while doing unpaid work (14%).

Electrical fires started by appliances, overloaded power points, damaged power outlets and general cabling wear and tear has become one of Australia’s leading causes of fires. According to some statistics, 20 per cent of all fires are caused by electrical failure or faults.

If the dangers listed above are not enough to convince you, then you should also be aware that doing your own electrical work will most definitely have an effect on your insurance cover. According to Youi Insurance, if the illegal electrical job is done incorrectly and a fire results, you will not be covered.

What does the law say?

The law on this matter is reasonably clear, with state and territory governments being quite strict in dealing with do-it-yourself electrical work. The NSW Fair Trading, for instance, states: “An electrical licence is required before any electrical wiring work can be undertaken in NSW, regardless of the cost of the work and regardless of whether the work is residential, commercial or industrial. It is an offence to do electrical wiring work without a licence or certificate. You can be fined $22,000 as an individual…”

But what is actually defined as electrical work?

Again, looking back at what NSW Fair Trading says, the term means: “The actual physical work of installing, repairing, altering, removing or adding to an electrical installation or the supervising of that work.”

Where the term “electrical installation“, refers to: “Fixed appliances, wires, fittings, apparatus or other electrical equipment used for (or for purposes incidental to) the conveyance, control and use of electricity in a particular place.

While the regulations in other states differ slightly, their definitions are largely the same.

At the end of the day, they all say the same thing. Only licenced electricians or registered electrical contractors may perform home, commercial or industrial electrical work. That includes caravan, motorhomes and camper trailers. All that the home DIYer can do in the 240v mains system is replace a lightbulb. That’s about it.

These laws extend beyond just home electrical work. They are applicable to any work involving voltages over 50 volts. So performing such work on a caravan or even a generator or inverter is also covered by these laws, whereas 12v power systems are not.

So when I read about people who have ground down 15 amp power plugs to make them fit into a 10 amp power point, I cannot understand how that could be considered a reasonable and legal thing to do. I also read recently how someone had drilled out the 10 amp outlets on their generator so they could fit the 15 amp extension cord. It is just madness! Not only are these actions dangerous, but they can also render your insurance void in the event of a claim.

Today, there are so many off the shelf products that allow you to safely and legally connect a caravan to a domestic power point. The Ampfibian would be the most popular and highly regarded but there are others that are also safe and compliant. They are not all that expensive either with prices ranging from $89 up to around $199. When you consider the cost of a new caravan, it’s a very small price to pay for the safety of your property and, more importantly, your life.

Please….no matter what you may read in a forum or Facebook group, NEVER make your own power cables. Do not do any work on your RV’s 240v electrical systems. Always buy quality products from major retailers that conform to Australian Standards.

If in doubt, seek professional advice from a reputable and licenced electrician.

Further reading: Will my generator power my air-conditioner? 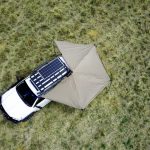 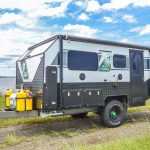