I really hate it when people post dash-cam footage of caravan crashes on social media especially when they involve trucks. Here’s why.

Barely a week goes past when there isn’t a video posted on YouTube showing dash-cam footage of a caravan being involved in a crash or altercation of some type. Nine times out of ten, the caravanner is portrayed in a poor light, often lambasted for being the cause of the incident and probably rightly so. A case in point was a recent video of a caravan moving into the lane of a passing truck, colliding side on and ending up on the opposite side of the road. Thankfully no one was hurt in what could easily have been a catastrophic incident.

On the face of it, it looks like the driver towing the caravan has done the wrong thing and inexplicably moved into the overtaking lane right in front of the passing truck without any warning and for no obvious reason. An open and shut case and, judging by the comments on the video, most people who have seen it agree the caravanner was in the wrong. But is it as clear cut as that?

For those who haven’t seen the footage, here it is. Warning, there is quite a bit of foul language.

My biggest gripe with this video and many others like it is that there is no context to it. The person who posted it has conveniently left out all the footage of what lead up to this incident. It is obvious there was some hostility between the two drives before the video begins as the driver of the truck exclaims “you’ve got to give way d— h—” just three seconds into the footage and before the caravan starts to veer into his lane. How else would he have any idea of the caravanner’s intent at that point?

The second issue is the truck driver claims the caravanner sped up on the overtaking lane but the dash-cam footage doesn’t show any speed data for the truck. We are expected to take the truck driver’s word for it and, unfortunately, many do.

Thirdly, from my point of view, the truck driver should have seen the caravan drifting into his lane and backed off rather than forcing his position. It appears from the video he did absolutely nothing to avoid the crash. I noted in the comments on the video he claimed he could not avoid the caravan and that he had two cars behind him at the time. His comments in the first few seconds of the footage indicate he knew the caravan was intending to move into his lane long before they collided.

Now before you all start throwing comments at me saying I’m taking the caravanner’s side, let me assure you I am not. I am just looking at it from both sides of the incident. Something a majority of people commenting on these sort of videos don’t do.

I find myself totally perplexed by the actions of the caravanner. There doesn’t appear to be a reason for him to change lanes. It doesn’t appear his indicators were on signalling his ‘intention’ to do so. While drivers regularly do things on the road that are completely inexplicable, this doesn’t appear to be a lapse in concentration or a random act. It looks like he has deliberately drifted into the path of the truck driver as part of the ongoing conflict between the two. Why he would do that is beyond me.

Maybe there is another explanation? The caravaner may have had a medical episode or condition. Perhaps he simply fell asleep at the wheel, was distracted by something, or there may have been a mechanical malfunction with the vehicle. Perhaps he didn’t see the truck thanks to the absence of towing mirrors fitted to his vehicle. There is a myriad of reasons that could explain the driver’s actions but we cannot know just from what we see and hear on the video.

This effect can have a more severe impact upon a large caravan and one that is relatively lightweight. Again, it’s very difficult to know just by what we see in the video, but that van is quite long (it has two air conditioners). Given the driver looks to be the only occupant of the ute and it doesn’t appear to be loaded with gear, it’s fair to assume the whole rig is close to empty. The effects of a pressure wave on such a rig would be significant. I’m no expert in vehicle dynamics and I cannot see any evidence of this in the footage but it is a possibility that needs to be considered.

At the end of the day, this is all pure speculation. My opinions will be different to others. These differences of opinions are what leads to arguements online when these dash-cam videos are posted on social media. It is impossible to determine the exact circumstances of this crash from the footage that has been provided. What is clear is that there were events that lead up to this incident to which we are not privy.

You have to question the motives of people who post these videos. Is it a way of educating drivers about the dangers on the road or is it done out of spite for the other party? Do videos like this improve relations between truck drivers and caravaners or do they just perpetuate the stereotype and shame caravanners? The fact these sorts of videos seldom show the events leading up to the main action tells you a lot about the motives involved.

While the caravan driver may ultimately be held accountable for the crash, in my honest opinion, both drivers could have taken steps to avoid the incident long before it happened. This looks for all intents and purposes to be the result of road rage.

If any good is to come out of this, we should all take away a few lessons:

One final point that should be made and comes from my favourite comment on that video. Imagine when the only decent driver showed here (the one in the blue Corolla) gets out only to be confronted by these two pitiful beings arguing like petulant children. “Yeah thanks, guys for almost killing me”. That says it all really…!

You might also want to check out our 10 tips for being truck friendly: Click here to read them. 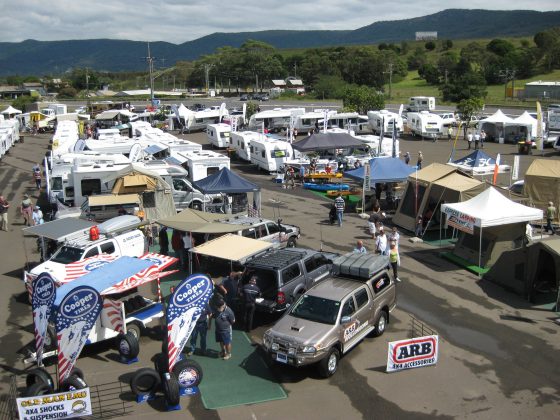