Truckies vs Caravanners Part One: Concocted controversy or real conflict?

Truckies vs Caravanners part one– is the conflict real or social media hoax?

According to many on social media, and even in comments on the RVdaily Facebook page, allegedly the caravan and trucking fraternities have been at war with each other. This war is played out on our nation’s roads. The battles take place in roadhouse car parks and roadside parking bays. The propaganda war, however, wages on social media in a truckies vs. caravanners battle.

If you have never towed anything bigger than a box trailer or you have limited experience towing a large caravan, give serious consideration to doing a towing course. Apart from gaining invaluable driving skills, you’ll learn how to properly load your rig, making it more stable. You’ll gain confidence in the handling of your set-up enabling you to keep pace with the other traffic on the road.

Want to know what it’s like to be a truck driver? Consider upgrading your normal car licence to a light or medium rigid truck licence. I can tell you from experience, it is a lot more complicated than when you got your car licence. There is just so much you have to think about when driving a truck that we take for granted in the car. For example, they teach you to expect a car to pull out in front of you at every intersection, so you are required to physically look at every side road as you approach them. You have to be able to reverse a large vehicle into a loading bay using mirrors only. The skills you learn are invaluable for towing and will make you a better driver.

The call to introduce towing licences is one that continues today and probably with good reason. The high number of caravan rollovers and increasing insurance costs as a result would seem to support the argument. Strangely, the RV community has continually rejected the notion. RV Daily looked at this issue back in April 2017 and we reported the UK actually did introduce such a scheme. In essence, if you want to tow anything heavier than a 6×4 box trailer, you need to upgrade your licence by sitting a separate test and demonstrating you can reverse a trailer.

Who’s in the wrong? Have a look at this video captured on a truck’s dashcam. (Apologies for the language.) Basically, it shows a truck and a caravan coming to blows while traversing a roundabout. If you ask me who’s to blame, I would say all three drivers. The caravanner performed an illegal lane change while driving through the roundabout. If he had been displaying a “Do not overtake turning vehicle” sign on the back of his van, he would have been in his right to cut the corner the way he did. He also should have pulled over to exchange details with the truck driver following the collision. Some may say that he may have felt threatened by the truck drivers. Given his attitude towards them (you can hear him mouthing off at the truckies on the CB radio), I’m certain he had little fears for his safety. The truck driver in the video entered the roundabout at a very dangerous speed with the clear intention to have a go at the caravan driver. Both truck drivers displayed clear aggression towards the caravanner.

Now, as I mentioned earlier, the problem with these types of videos in a truckies vs. caravanners argument, is that there is no context. We do not know what events led to this incident. That said, there is little that could excuse the behaviour of any of the three drivers in this video. Apart from risking their own lives, they risked the lives of any other motorists around them at the time.

This is the sort of behaviour we need to stop right here, right now. A day at BP Northbound in Wallan, Victoria. It’s not a busy day yet cars are filling up caravan and truck parking bays. It is pure laziness.

You know the feeling. You’re driving along a freeway at 100km/h, you want to overtake slower traffic and there’s some drongo in an old Datsun sitting in the right-hand lane doing 80km/h with a line of traffic queued behind him. Or you’re in a shopping centre carpark and all the disabled spots are taken up by cars with no disabled access sign in their windscreens.

Go on. Admit it. It’s infuriating isn’t it?

Well, consider that our nation’s truck drivers are experiencing this same frustration on a daily basis, thanks to a portion of the caravan and motorhome community. If we are to believe everything in the trucking press, as well as on social media of late, grey nomads are trundling around the country in droves, completely ignorant of their fellow road users, particularly truckies. They are driving at speeds well below the posted speed limit with queues of traffic behind them, only to suddenly find the accelerator once they arrive at an overtaking lane. They’re also clogging up truck-only parking areas, depriving truckies of an opportunity to take their mandated rest breaks. 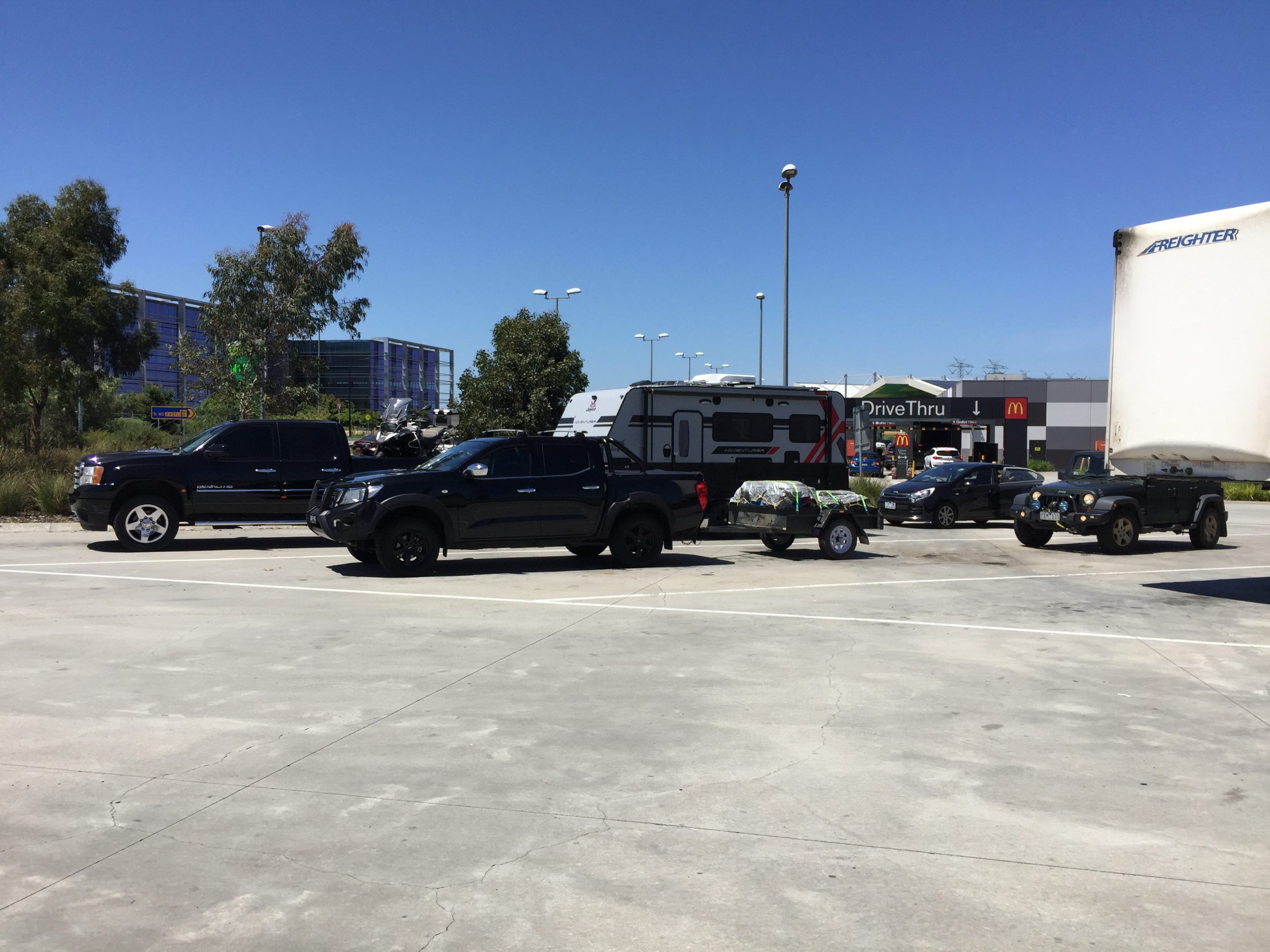 The frustration and anger felt towards caravanners has reached such levels that barely a day goes past without a social media post by a truckie begging for grey nomads to be more considerate of the needs of professional drivers. These posts lead to calls for police and councils to take action by forcing caravanners to move on or issue fines. Some advocate for truckies to take matters into their own hands and make as much noise as possible to drive away these ignorant nomads from their parking bays.

But just how valid are these claims? Are grey nomads really as inconsiderate as everyone is making them out to be or is all this just another social media beat-up?

This month we want to look at the issue and dispel a few myths. But most importantly, we talk to the truckies themselves and ask them for their advice to caravanners as to what we can do to make their lives less frustrating. Finally, we want to share with you our top 10 tips for being truck friendly. If we are going to end this war, someone has to make the first move and it may as well be us.

We’ll be back with part two of truckies vs. caravanners over the next few days, so stick around; thankfully, it’s not all bad, and there are ways for us to all get along!