This Avida is a rock solid option for rough country 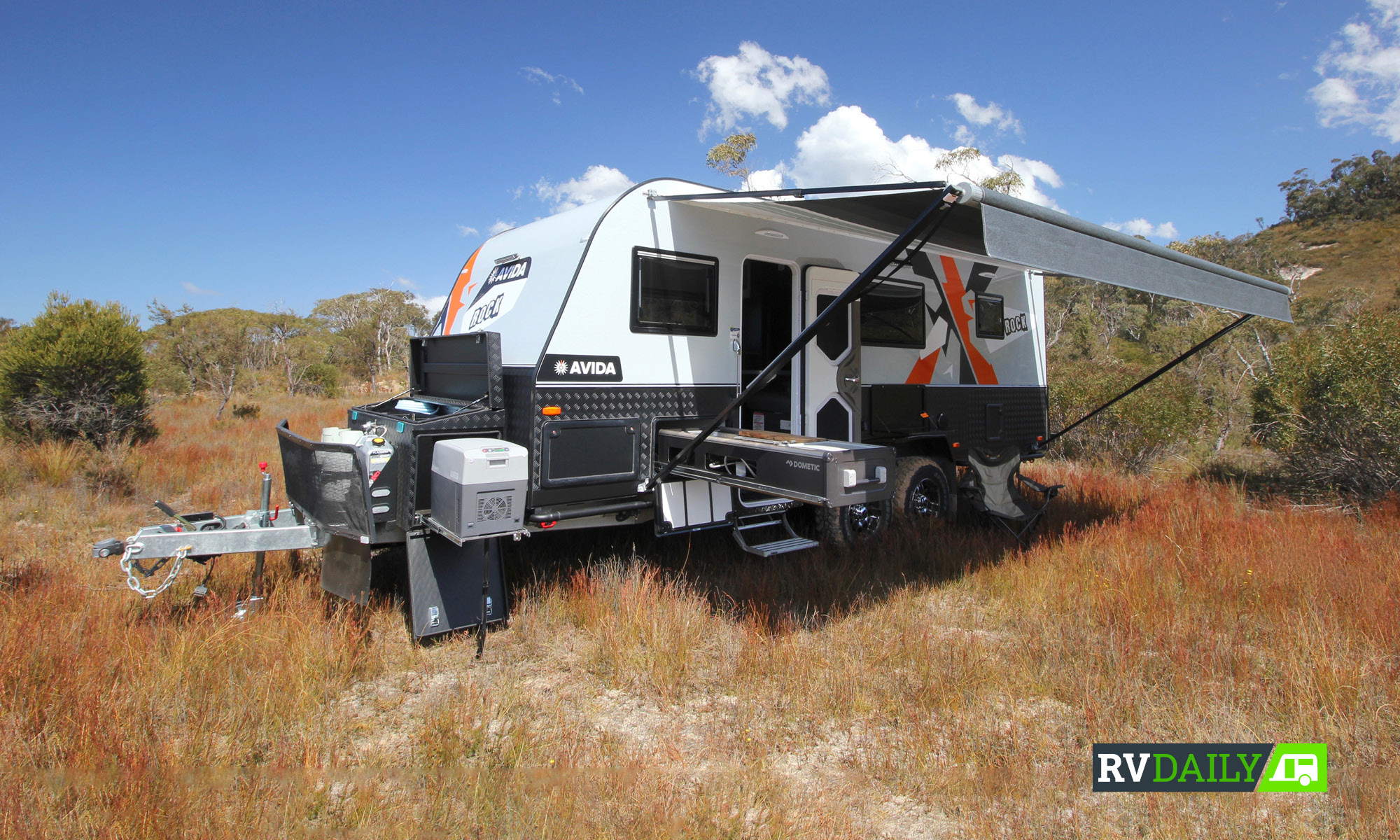 Avida has expanded its range with a large off-road caravan called the Rock. Is this just clever marketing to conjure up images of the Red Centre and ‘rock-solid’ toughness, or is there something to this new rugged-looking van?

The Rock we’re looking at here is a 20-foot (internal) four-berth van, with a five-berth (with triple bunk beds) or two-berth van also available with the same body size. If you wanted something a bit more nimble to suit your travel, you’re in luck because Avida also offers the Rock in a 16-foot, two-berth version.

Like Avida’s other models (the Topaz, Emerald and Wave), the Rock is built with an insulated fibreglass composite panel floor, wall and roof. What is different about the Rock is that it’s Avida’s first caravan to use a one-piece front, roof and rear section.

Climbing up into the Rock, your first impression is of a bright, welcoming layout. The Rock has an unusual, east-west bed up front, followed by a more Catholic layout, with the kitchen on the offside with an L-shaped lounge opposite and bunks and bathroom up the back. The black and white theme is both classic and modern

The queen bed has deep knick-knack storage cubbies next to the nearside wall and dual USB outlets (and two-pole 240V outlets), also at the bedhead on the nearside.

The only negative about the bed is that it can be difficult to get into and out of. When lying next to the slanted, vinyl padded front wall, it feels a bit claustrophobic too.

The lower bunk bed has plenty of room and is comfortable but the upper bunk in the evaluation example lacked headroom. It was simply too cramped. Avida plans to improve this by lowering the upper bunk bed base.

There is no lack of storage space inside the Rock, however, the storage lockers above the queen bed could have been made a little bigger, and you have to move the TV when opening the offside locker door.

The kitchen has large lockers above the bench, cupboards and drawers below it, and two slide-out pantries fitted alongside the fridge-freezer.

The only issue with any of this was the concertina curtain divider (for the rear bunk ‘bedroom’), which is fitted too close to the slide-out pantries. When opening the pantries, you had to move the (closed) curtain out of the way.

The kitchen bench doesn’t have much room when preparing for large meals; you’ll end up using the dining room table too.

The dining table can be adjusted for height and moved closer to the nearside when not being used, giving more space down the caravan’s centre walkway. The only problem was that for four people sitting down for a meal, there just isn’t enough space at the table. The Rock is weighty, but it’ll get you off the beaten track

The rear bathroom is not big on floorspace and while it does not feel cramped, the shower space is generous and you’ll want to get dressed in there rather than the bathroom. In fact, the hallway at the rear bunks is really the most spacious place to get dressed, with the blinds closed for privacy.

Even though it’s too heavy to go very far off-road, the Rock is more off-road capable than any other Avida. It has excellent underfloor and water tank protection, side brush bars, a stone guard and Goodride Radial LT265/75 R16 Mud Terrain tyres. The suspension too is an off-road design; the independent trailing-arm Cruisemaster XT, equipped with coil springs and dual shocks per wheel.

Up front on the drawbar is the toolbox, which has a slide-out on each side and a strut-assisted lid that opens to reveal the slide-out lockers, a central locker and a tray that extends the width of the toolbox. There’s also a front full-width tunnel boot and a storage boot at the back.

If Avida provided a light in that rear boot (which can be accessed by lifting the lower bunk bed base too), it would be useful.

One of the great features of this van is the Dometic external slide-out kitchen (which has gas cooker, tap and sink). With a lot of food-prep room (including a large, removable chopping board), you would only really want to use the inside kitchen when the weather was bad.

For carrying additional fuel or water, there are two jerry can holders on the A-frame. There is a work light on the front panel, a picnic table on the nearside, and an external shower on the offside.

The nearside also has 12-volt and 240-volt power outlets, three LED lights (one of which is a work light), two speakers for the premium audio system (which has Bluetooth and USB connectivity), and, of course, a roll-out awning.