Sisters are towing it for themselves That’s right, why should the man do all the towing? Not content with navigator status, our hero goes for her pilot’s wings, singing, sisters, are towing it for themselves

“What an achievement, that you have driven all around Australia,” was my answer to my husband’s question ‘When are you going to tow the caravan’? Yes I know it’s lame, but the whole thing frightened me. It looked hard, it looked awkward and it looked scary.

So imagine my surprise when I suggested to the RAC WA that they should sponsor me taking a course and promote women learning to tow their caravans. Yes … I said I suggested it. What was I thinking?

I run a website called Travelling Australia with Kids (TAWK) with over 11,000 followers on our Facebook page and I have the opportunity to influence others. I needed to do this.

The thing is, when I think about it, I know it’s important – you never know what could happen out there on the road and when you might need to step up and take over. Let’s face it, I should at least be able to share the towing. I know that and yet I still didn’t feel confident. There’s a lot to think about and I really didn’t know where to start. So I thought a towing course would be the answer and I knew the RAC WA offered one. 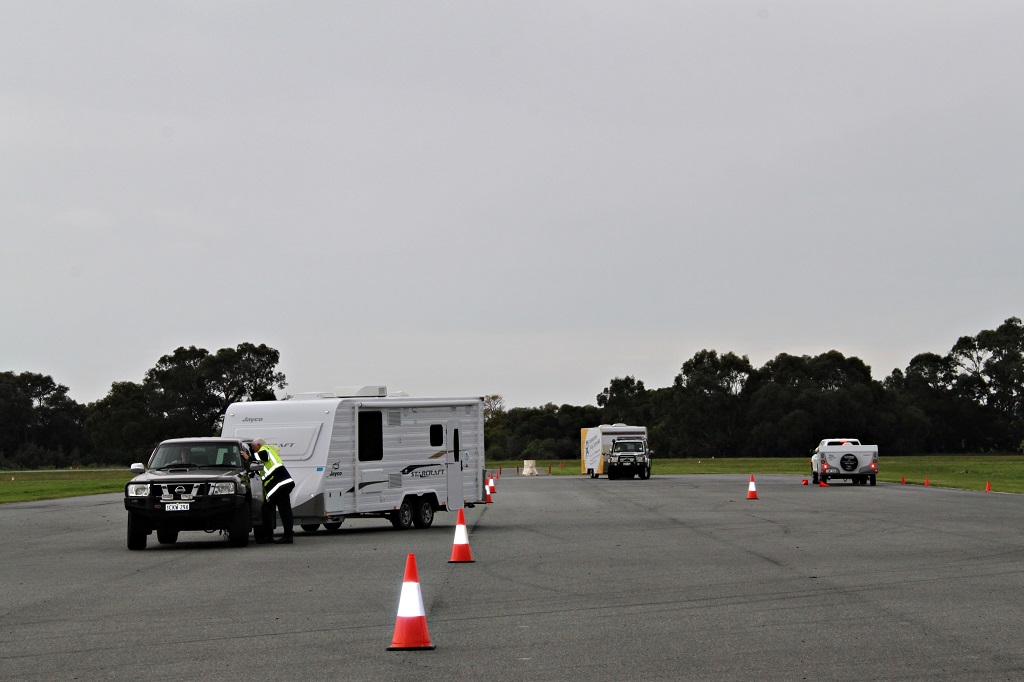 It was a bit late as our travels around Australia had finished and while my husband thought he could lay claim to ‘I have driven all around Australia’ there was that moment when we had to pull over after arriving at the scene of an accident. He jumped out to assist (all involved were okay, thankfully) and I had to drive the caravan five metres up the road to pull off the highway. It was only five metres, but I’m claiming it and it meant he couldn’t! Although this subject does always bring about a heated discussion, which I won’t get into now.

They said yes! The RAC, I mean. Yes. They thought that anything that I could do to encourage women to tow their caravans with confidence and improve safety on the road was something they were happy to support. Oh! What now? Well, I argued to … myself actually, our caravan was too old to appear in any article that I could write; so really unless I could get a manufacturer to supply one, then really I couldn’t do it. Yes, I know – another excuse.

My internal dialogue continued and that ‘safety’ side said call Jayco and see if you can get a van to tow. I did. I called, I told them the story so far; and again without hesitation, Jayco Caravans got on board. They were really keen to support this important issue. I was stoked. I was amazed. I was scared. And that’s the issue; many of us are scared and that’s what’s stopping us. So I knew I had to do this and encourage others too.

Jayco Caravanland in Perth delivered the caravan to the RAC WA DTEC (Driver, Training, Education and Corporate) centre first thing on the Monday morning, and I was there to receive it. The delivery guy hitched it up to my car … which was just as well, as I didn’t know how to do it.

It was much bigger than our caravan and again the trepidation kicked in. I couldn’t do this, how does anyone do this? But, before I knew it, I had been given a high visibility vest and introduced to my fellow students. Andy (our instructor for the day) was leading us to the classroom. Classroom? There was quite a lot more to this towing business than I’d previously thought. There are more legal requirements than I thought and frankly I’m not sure that everyone is aware of them. I’m told a lot have changed recently. There’s the correct coupling equipment; lights and reflectors; and the correct Tare Aggregate Mass for your car/caravan combination.

It turned out my husband knew all this, but if I’d have been thrown in at the deep end on our travels, I would have been way out of my depth. We were taught acronyms to help us remember the checks we needed to do before even hitching up the van – most of which I had no idea about. There had also been some law changes regarding chain ratings and shackles – I would not have known what these were before this course, and I encourage you to ensure you comply with current regulations. 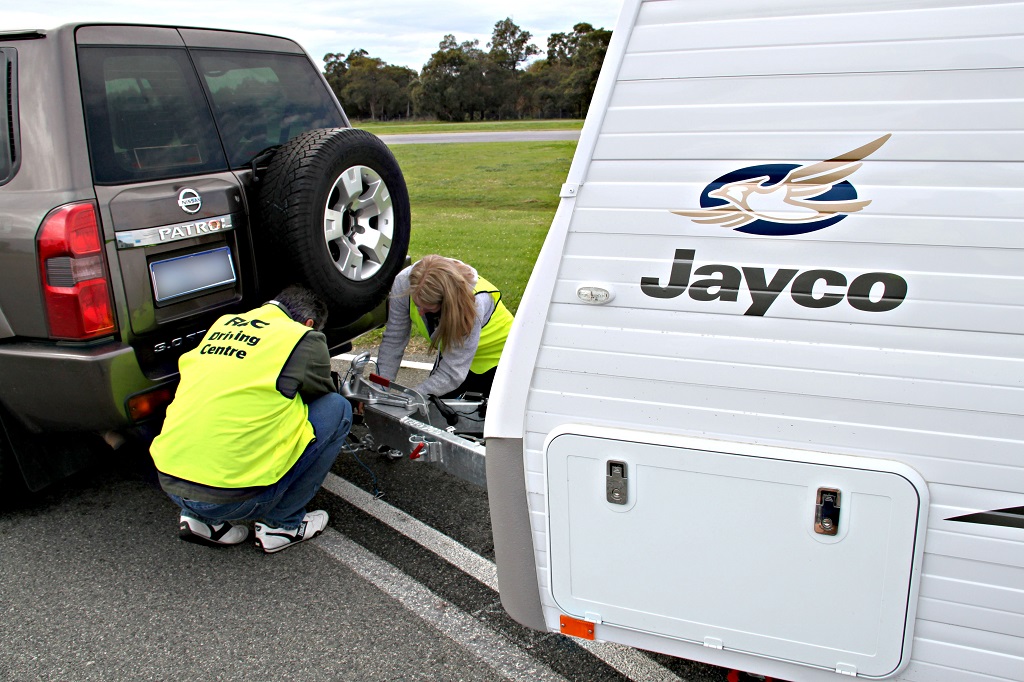 We were taught lots of simple (probably obvious) details, that not only enhance safety but will help your vehicle perform better while towing. I made as many notes as I could. Before we knew it, it was time to go and put some of this knowledge into practice.

I took a deep breath and we headed towards our vehicles. The P.O.W.D.E.R. check commenced:
P = Petrol (or fuel really – but that would not have worked with the acronym)
O = Oil
W = Water
D = Damage
E = Electronics
R = Rubber

And then it was time to unhitch the perfectly hitched car and caravan (that were only joined about an hour earlier) and, of course, re-hitch. Not my hubby, not the Jayco guy nor the instructor … me. I was going to do it. Apparently.

You know what, it all fell into place. After all, I had spent years watching my hubby do it. Now it all made sense and, to be frank, it was fairly obvious. I did it all and without much effort. Off and then back on again; easy peasy. Admittedly it was without all the ‘reversing onto the hitch dramas and heated discussions’ tension between couples that is normally associated with the parking of the caravan – but the instructor gave us a few hints on that, too.

Next it was time to jump in and give it all a go.
We were going to tow the caravans through a slalom circuit; then do some emergency stops, in the dry and the wet; and finally the dreaded reversing – in a straight line, around a corner and into an allocated bay just like in a caravan park (although without all the trees, kids and people watching).

The slalom course was fun. I was able to manoeuvre the van better than I thought and while I chose to take the instructor with me on my first attempt, I needn’t have. The van was lighter than I thought it would be and I soon realised that while I had to check in the side mirrors to ensure that I was navigating through the cones without taking them out, I really had to watch where I was actually going too.

First we were to adjust our electric brakes, to ensure they were at their optimum performance level. It didn’t take long to feel the impact of (what felt like) little adjustments on the device that made a big difference in the performance. Then it was time for the emergency stops. Again, I chose to have Andy with me for the first couple and he was more than happy to ride shotgun – or so he said.

At the allocated spot he told me to brake as if I was about to hit a dog. As we stopped, he realised that I was not a dog person. Next time round, he suggested I was about to hit a cat. We screeched immediately to a complete standstill and I got used to how it feels when braking with the caravan behind you. Andy left to prepare the road for our wet stops. After a few of those, I felt as confident as when I was just driving the car. This all seemed too easy. Then he said the word ‘reversing’ and I knew everything was about to change.

Reversing a caravan. Once again, Andy was by my side and gave me one piece of advice: “When looking in the side mirrors, turn the wheel towards the side that you want the caravan to disappear from.” That was all I needed. I didn’t try to work out the mechanics of it. When I saw in my mirrors more of the van than needed to be there, I turned the steering wheel towards it. And it worked! It disappeared and in turn went around the corner. Easy. There were some other systems that he explained … but this one worked for me.

Easy, as I say, until I had to do it again. I found I really had to think about it again – as some part of my brain was trying to rationalise it. The more advice I was given, the more confused I got. I suddenly understood my husband’s frustrations as I pointed one way and the van went the other and I’d get all annoyed about why he wasn’t listening. He obviously was; when maybe he shouldn’t have been.

Once I got my head around the first part of the turn – and no-one threw me any advice – I found that I could look and judge it, and some part of my brain knew what to do. I did it time and time again and did it well. I even got the van into that little space sectioned off for us to reverse into. I did it. Twice! But again, there were no distractions. No partners, kids in the car, kids behind the van or half the caravan park population watching.

One of the hardest things for me was reversing in a straight line. You wouldn’t think so, would you? I certainly didn’t … but it was. No matter how straight I thought I had it all lined up, somehow one end would kick out – and before I knew it, it seemed I had to turn the van again to make it straight. Andy, of course, had the answer for this. Being the good student that I am, I trusted him and it worked. I can’t imagine taking the same instructions from my husband in such good faith – and that’s another reason the course is such a good idea. The instructor is not your partner.

The day was coming to an end and I did feel that I could manoeuvre the caravan with confidence. I had learnt a lot and was now ready to get out on the road. I wished there was the option for an instructor to go out on the main road with me, for that extra bit of confidence. I have made this suggestion because I know if it had been an option I would have secured it. 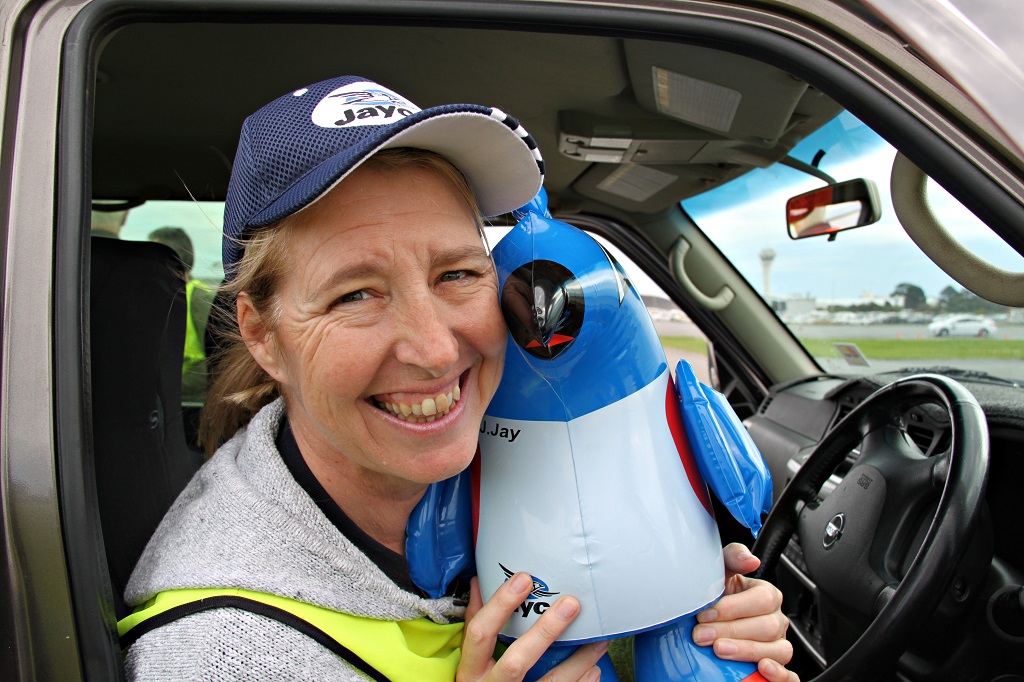 It was time for Jayco Caravanland to pick up the Starcraft caravan, so it was probably good that the option to go on the main road was not there (I think I would have driven off into the sunset with it). I unhitched it myself with confidence. I knew exactly what to do now.

I will not complain again when my hubby is reversing and I say one way and he reverses the van the other. Although of course, next time, I will be the one reversing the caravan and I know that he will be more understanding.

All in all, it was a great course and I’m glad I did it. I should have done it long ago; and frankly, if you’re not confident to tow your van, you should do it too.