Suncamper’s flagship, the Santa Cruz, could be a safe bet when it’s time to downsize from bricks and mortar

Selling up and downsizing is a great way of ‘liberating’ your hard-earned dollars, and for many, the dream is to do just that and hit the road full time. So, let’s say you’re cashed up and looking for a motorhome with not just space and features, but also style: Enter Suncamper’s new flagship Santa Cruz. Aimed squarely at the top-end of the market, the Santa Cruz is a clean-sheet, bells-and-whistles motorhome that inside looks and feels more like a contemporary apartment than box-on-wheels. In the name of research, we jumped into the prototype Santa Cruz and headed away for a few days to see if it’s as liveable as it is good looking. 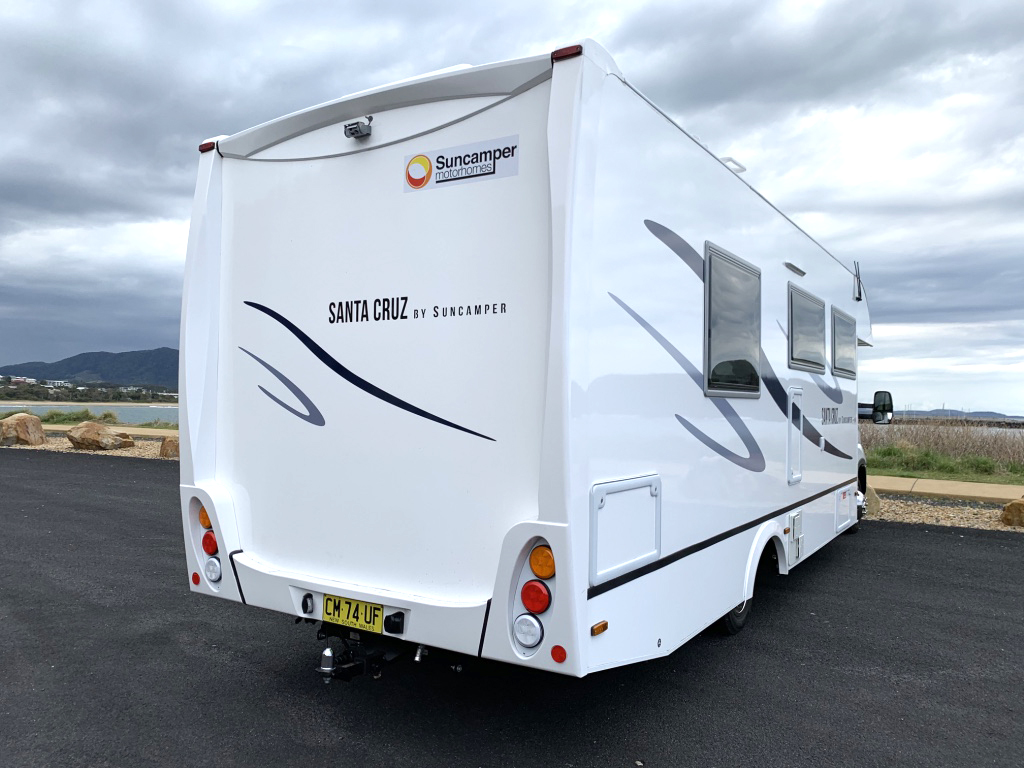 The Suncamper Santa Cruz rolls on a stock Iveco Daily 50-170 cab-chassis with the highly desirable eight-speed ZF Hi-Matic auto. The 50 in the Daily’s model name refers to five tonnes, or more specifically, 5.2 tonnes (5200kg), which is the model’s maximum gross vehicle mass (GVM). The Santa Cruz has a Tare weight of 4300kg, providing a maximum potential payload of 900kg, plus an awesome 3500kg braked towing capacity.

Although you’ll need an LR driver’s licence all that’s required to get one is some competency-based tuition via a driving school and a bit of study. There’s no actual driving test and an LR licence opens up a whole new world of driving possibilities.

The 170 in the Daily’s name means 170hp (125kW), delivered from a 3.0-litre single turbo diesel. It produces 430Nm of torque and while there is the option of the Daily 50-210, which has a 210hp (150kW)/470Nm twin-turbo version of the same 3.0-litre engine, I believe it would be overkill in this application. Engine braking was good and the gearbox would hold a gear downhill without up-shifting. Fuel economy for our trip was 13-14L/100km (22-20mpg) – not bad for a big machine being driven at the legal limits – while the 100-litre tank provided a safe range around 700km.

In the cab, Iveco has really lifted its game in recent years. Reasonably car-like and featuring driver and passenger front and side curtain airbags, it also has climate control, electric windows and (heated) mirrors, remote central locking, cruise control and a touch-screen infotainment system with GPS and hands-free phone integration. However, it’s a pity the steering wheel only has reach adjustment. We loved the leather covered and heated suspension cab seats, which allow you to dial in your weight for just the right amount of ‘bounce’ on rough roads. Great fun. As the Suncamper brand is known for, the Santa Cruz uses a steel frame base and welded aluminium wall frames, with fire-retardant insulation. It’s a strong, proven system that has no structural wood to get wet and rot (internal cabinetry is made of marine ply that’s screwed and glued). The body has fibreglass walls and a single-piece roof; the latter home to three big Heki hatches, the requisite air-conditioner, solar panels and TV aerial.

The Santa Cruz is a B-class motorhome, meaning there’s no over-cab bed, so it appears long and a bit squat. There’s a fair amount of rear overhang and while on test that didn’t prove a problem, the towbar did ground a couple of times.

For a big motorhome, external storage is at a premium. Surprisingly, there isn’t a single, dedicated storage locker and bulky items like golf clubs would be problematic. What the Santa Cruz does have is shared storage in several locations; those primarily being a deep shelf above the slide-out kitchen, plus in the toilet cassette locker for hoses. While there’s enough space for a couple of folding chairs and a table, levelling blocks and a small toolbox, if you like to carry the contents of your garage or shed you’ll need a trailer.

Other lockers house LPG cylinders, the remote-start generator, 2 x 120 Ah house batteries and electrics, outdoor TV/entertainment system and the water system with external shower. Speaking of batteries, they are also charged by a pair of 100W solar panels. And a note on the water system: The 200-litre onboard tank and mains water connectors are in the locker with the outdoor shower and easily reached drinking water filter. There’s also a second mains water connector, but it’s to flush out the 132-litre grey water tank and is a thoughtful touch. Other external features include an electric awning, speakers and LED lights on both sides of the vehicle, plus double-glazed acrylic windows with in-built privacy and insect screens.

Entry is via a Euro-style security screen door and an electric step. Once inside, you realise the Suncamper Santa Cruz is something special. It has the look and feel of a modern apartment, with design touches and features that not only break new ground, they enhance the living experience.

The open plan layout features a front lounge/dinette, mid kitchen, rearward east-west bedroom and a full-width rear bathroom. Despite the lack of slide-outs there is a genuine feeling of space, aided in no small part by those three big roof hatches. There are three windows on the driver’s side but only one on the kerb side and none at the rear. If that seems odd don’t worry, it works well and the Santa Cruz is one motorhome you won’t feel claustrophobic in. 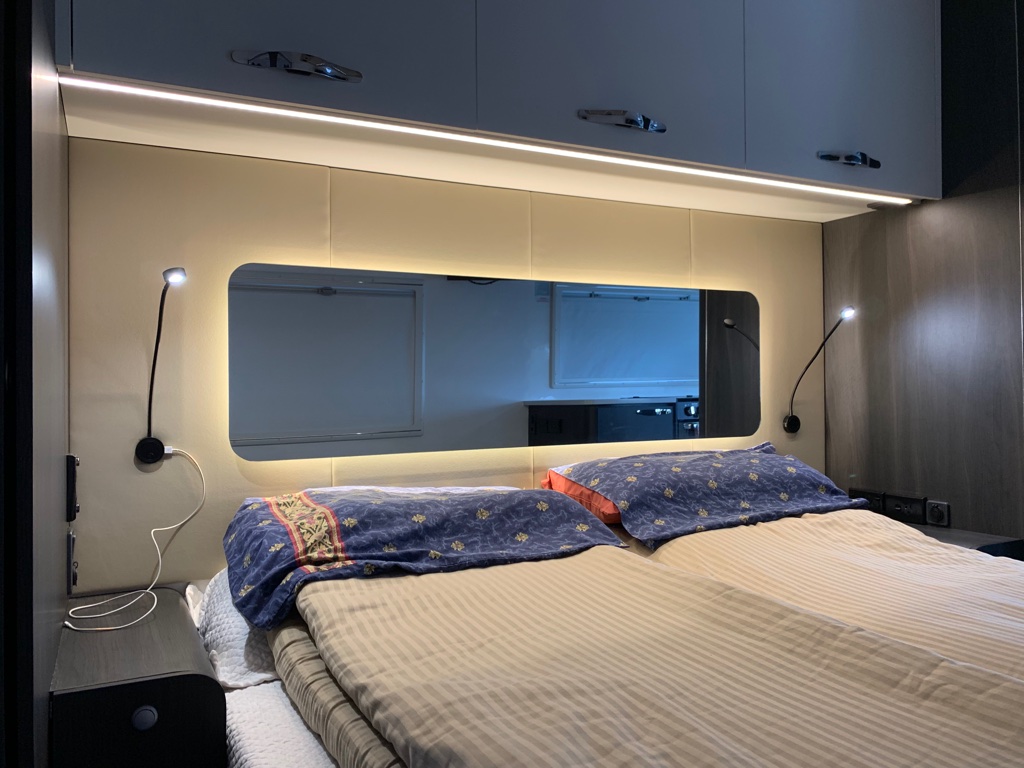 Remembering the test Santa Cruz was a prototype, we spent a lot of time thinking about how the design worked in practice. For example, the Mrs loved the kitchen and cooking options, and was determined to try them all. So, first night she cooked on the huge, slide-out kitchen that features a three-burner gas cooker, sink with hot and cold running water and a drawer fridge. Overkill? For sure. Fabulous? Absolutely! Second night it was the microwave, inside cooktop and grill. Final night she used the oven and cooktop.

“This is a motorhome anyone who loves to buy fresh produce and cook as they go will love,” she commented.

For my money, the pop-up Nespresso machine got the must-have gong. Is it a gimmick? Not if you love good coffee… Both of us were impressed by the headroom when sitting up in bed, so we could read or just sip coffee before starting the day. And the Suncamper Santa Cruz must set the record for USB charging outlets: 14 in the living area and two in the cab. The bathroom also got a big thumbs-up for its openness, with privacy just a slide of the opaque double-doors away. We also loved the glass splashback that looks like tiles yet is absolutely smooth and easy to wipe clean. And then there was the shower with its dual heads – one adjustable on a hose and the other rainwater – and fully lit back wall. Plus, the floor was raised so water drained off the sides and underneath, and we didn’t end up standing in the suds.

Other impressive features included extensive use of open and concealed LED strip lighting; beautifully crafted cabinetry whose curves were replicated in the shapes of the massive bathroom and bedroom mirrors; stone kitchen benchtops; plush leather upholstery and the dark wood-look flooring. The decor, which contrasts dark cabinetry with light benchtops and walls, splashes of colour and plenty of natural light, simply works and feels modern and inviting. All those elements and others combined to produce a motorhome whose enjoyment in use was greater than the sum of its already impressive parts. 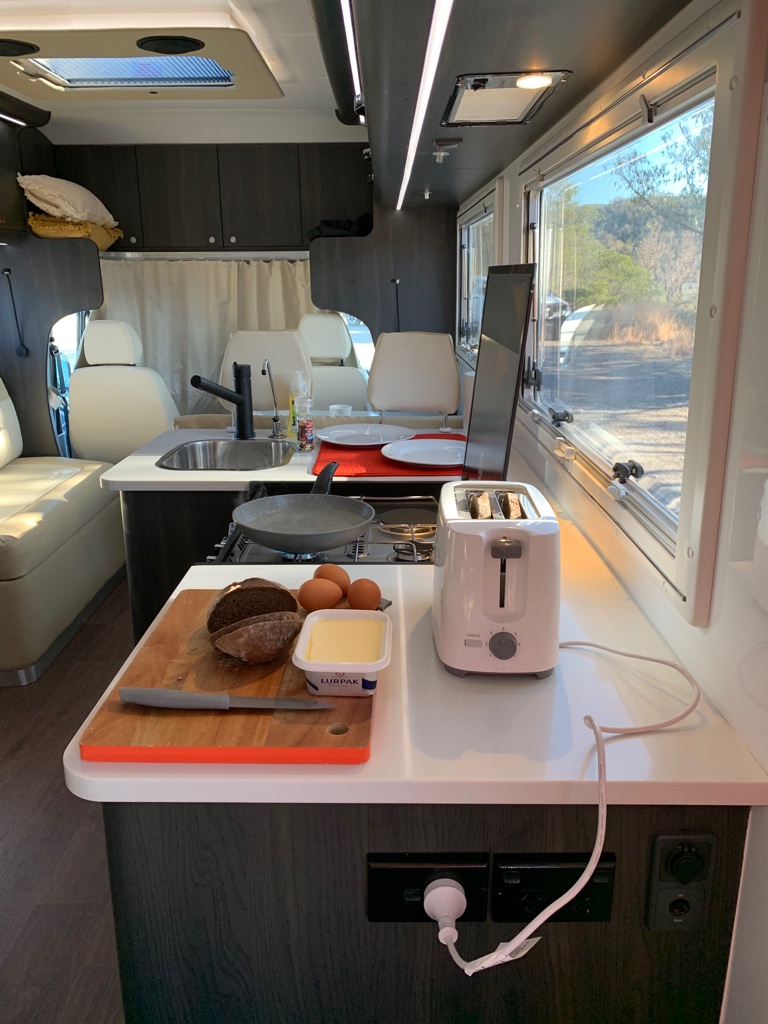 On the final morning we were sitting in bed sipping coffee from the Nespresso machine and watching the world go by. A family with three small children was struggling to pack their camper trailer after a rainy night, while our Webasto heater took the chill off the morning air. After another coffee and poached eggs, we watched as the campers finally stowed everything, round-up the kids and headed off. We lingered for toast and jam, coffee and showers before it was time to follow.

That’s really what the Santa Cruz is all about: Spacious and relaxed living. It’s comfortable, has all mod cons (I forgot to mention the tiny dishwasher and optional washing machine!) and instills a feeling of contentment not all motorhomes do. From the contemporary interior to the multiple cooking options and myriad charging outlets, it simply covers all bases without fuss. With a bit more external storage and swivelling cab seats it will be near perfect and quite possibly worth betting your house on… 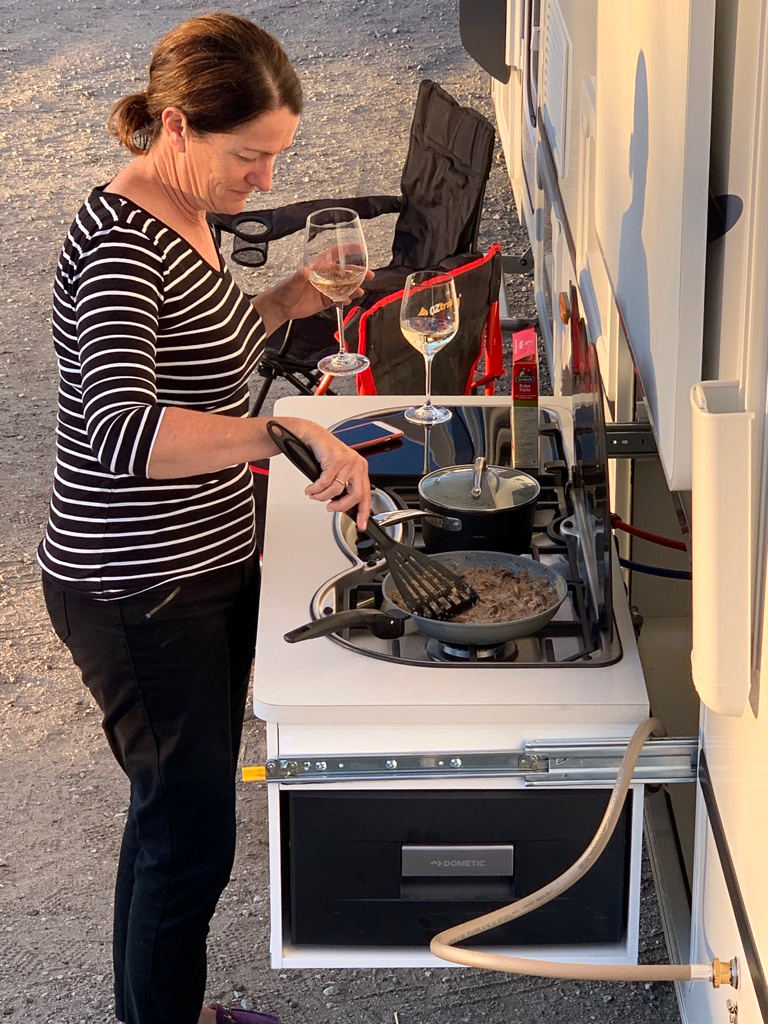