Ram meets Rhino in our tow test but the big news is that thanks to a factory-approved importer conversion the US left-hand-drive Dodge Ram now leads with its right.
By Tim Scott and Brett Hemmings

Preconceptions. There were a few with the Dodge Ram in this test. Like V8 and leaf springs; both were expected when encountering this US ute but what you get is not what you’d expect. Standing in front of the bluff red bonnet in the car park, it was hard not to be impressed in a way that big (and in this case red) shiny things attract most blokes and quite a few blokettes. It happened with an F250 years ago but the Dodge Ram 2500 Laramie was a step up in terms of styling and appointments as well as with engineering.

Preconceptions. There were a few with the Ram in this test. Like V8 and leaf springs; both were expected when encountering this US ute but what you get is not what you’d expect.
Standing in front of the bluff red bonnet in the car park, it was hard not to be impressed in a way that big (and in this case red) shiny things attract most blokes and quite a few blokettes. It happened with an F250 years ago but the Ram 2500 Laramie was a step up in terms of styling and appointments as well as with engineering.

So, no V8, though. No, it’s a 6.7-litre straight six Cummins turbo-diesel that provides instantaneous squirt exaggerated thanks to the elevated driving position and some mind-boggling torque to the tune of 1084Nm. Kilowatts gather in a group of 276. A six-speed auto is marshalled via column shifter, which will confuse and amuse until you’re used to it! The icing on the cog-swapping cake is the high- and low-range 4X4 to take your adventure as far as you’d like.

While the motive power source is not quite what you’d expect, climbing into the cabin provides even more of a sensory overload. Obviously first is sight and smell; leather. Sound comes later with the in-dash touchscreen and U-Connect entertainment system. Taste. Well, that’s not a literal unless you have some issues to work through but the windows are huge for a lickin’.

The first adjustment was made by the importer, Ram Trucks Australia (Ateco), in the conversion to right-hand drive; no small operation and as you’d expect that is a major component in the price inflation from what’s asked for in the States where these trucks form the workday staple and are cheap by our standards. Here the Ram and its ilk are price-wise nudged into a luxury status item. So I guess it’s cool that the in-flight experience reflects an upgrade for appointments rather than a ‘step this way to steerage, sir’, direction.

All up there’s seating for six with the front seat set taking a third occupant in the foldable centre console section. And folding seats mean the rear allows a flat-floor cabin if you require it but the seating in any event is generous, comfortable – with heating and cooling per pew included – and the entire accommodation would deter any cat, Hep or otherwise, from attending a swing party here. This, of course, is the dual-cab variant but the Ram is also available in single- and space-cab models.

So the Ram’s capacity as a long-distance tourer for humans is not in doubt. It’s a truck in which you can easily and comfortably spend hours and with a 117-litre fuel tank the Ram will eke out its thirst further than you’d think. Our sister magazine Unsealed 4X4 averaged 14.1L/100km over a weekend that took in highways and enthusiastic sand driving. In fact, Unsealed editor Dex came along for our tow test with the Goldstream RV Rhino to add that element to his own review and our fuel figures reached 22.6L/100km. More on that shortly.

You’ll have noticed the word truck creep into the vocabulary. The Ram is a truck. It rides on beam, or live, axles but makes a step forward in that it employs all coil suspension (three and five link front and rear respectively) rather than the leaf-spring set up I’d assumed at first. The tray can take up to 913kg in payload, of which any portion will settle the unladen ride somewhat that is, of course, the same as any ute; just in this case it’s amplified a little.

Add something like the Goldstream 20-foot van and the liveliness settles but not entirely. While that gives you an idea what the suspension capacity for compression is before loading it would be fascinating to take a fully-loaded Ram and van combo for a long tour – and that’s a combination that can mean a GCM of 11,479kg with pintle towing. Although sub licence upgrade numbers are available depending on how you choose to hitch up using a 50 or 70mm ball.

With all this hauling ability you may be as pleased as Dex was to know that the Ram has an exhaust brake … truck driving fantasists form a line over there; just kidding – it’s a very useful safety addition and the kilowatts the exhaust brake removes are displayed on the dash as you drive! You want some of that fantasy now, don’t you?

The expectation that the Ram will be used for regular towing is provided for with the Tow/Haul program in the Laramie’s electronic arsenal. The rear-view camera offers great vision for connecting the van or trailer but once underway the Tow/Haul program makes sure the engine and gearbox are offering you the best in terms of selection and power/torque. Again, the trailer brakes are standard on the Ram and ESC means that within its limits everything is as stable as it can be.

We popped out to Parravans, in Windsor NSW, to collect the Goldstream RV Rhino caravan. At 19-feet 6in, the Rhino is a rear ensuite model that’s off-road oriented with a Vehicle Components Cruisemaster independent suspension and a DO35 hitch, so of course the first thing the team at Parravans had to do was to swap our towball – thanks guys!

With black chequer plate skirting the van it’s well protected against stone damage though on this occasion we wouldn’t be throwing much more than dirt roads and gravel at it. This particular van had been specified for a customer as a Rhino – hence the underpinnings – but he hadn’t wanted the Rhino graphics, just in case you’re wondering.

While as we’ve pointed out the Ram can cope with anything you might care to tow, a 20-foot van at 2748kg Tare (3500kg ATM) seemed an average proposition, although Dex and I both have HR licences that could have seen us hitch up a bigger combination they’re not always readily available for test purposes.

Given the name designation we’ll start at the rear with the full-width ensuite that has a Thetford swivel loo, a ceramic basin, a very generous shower with chrome fittings (and massage rose) and one-piece Danmac glass door. A mini Daewoo 3kg washing machine completes the wet room duties. Four overhead lockers impressed with substantial hinges as well as their capacity augmented by multiple shelves and a vanity cupboard. It’s separated from the rest of the van by a sliding timber door.

The reverse side of the shower wall – that works very well to visually ‘increase’ the van size – is a four-shelf mirror-backed unit with chrome touches and it sits above the leather lounge seating area.

Opposite, on the other side of the ensuite doorway, there is a unit containing in the Daewoo microwave and the three-way Dometic 190-litre fridge. The cooker is a Thetford Minigrill Mk3 with three gas, one electric hob and no oven but a grill as the name suggests.
A four-drawer stack is well executed as is all the timber work with solid wood sides as opposed to metal pressing types seen elsewhere. The simple benchtop is functional with an oval sink and the flick tap also has an inbuilt drinking water filter. The kitchen area is lit on the splashback wall by a Seitz hopper window complete with insect and privacy screens as area all the windows in the van. A down-lit rangehood with fan makes the cooking easier and more pleasurable for the chef.

Above the rangehood, a cupboard contains the RV Electronics gauges for the water tanks and the Narva fuse panel for everything electric. Battery management for the two 105 AH AGM batteries (in turn fed by three 120 amp solar panels in a Topray system) is by Projecta. An easy-to-read fuse chart makes quick work of identifying the source of your problem should one arise.

The finishes used are glossy but different in that upper cupboards are grey and the lower areas all white. With plenty of natural and 12-volt LED light it’s a contrast that works well to eliminate any dark spots – it’s a nice and bright van interior. Entertainment is handled by an adjustable Finch TV and a Fusion Link audio system.

The leading edge of the kitchen unit section is tapered to allow easy access to the bed, but cupboards on the end contain the water filter and a second Projecta BMS unit that, oddly, has the readable face pointing inwards. Also here is the Truma Combi gas/electric hot water and heating system control set-up. In addition, a Dometic roof-mounted aircon unit takes care of cooling when on mains power.

The bedroom is naturally lit and ventilated from above by a comprehensive Finch vent with LED downlighting. The queen-size bed lifts on gas struts, and the under-bed storage
is reached from within and also the front exterior locker. Alongside the reasonable storage compartments is the Truma heating unit and the vents exit from trim beneath the bed. Both sides of the sleeping platform are equipped with a wardrobe, and shelves, lights and a power point. Very large windows mean the area takes in as much light as possible.

VERDICT
With the vehicles in this test named after horned creatures, it’s interesting to note their behaviours in terms of their natural namesakes’. The Ram, small and stocky, is nothing like the Dodge variant which although it was purposeful on the charge, it was lively under towing conditions. The rig is big and needs some weight to calm it down. In essence the Goldstream wasn’t enough of a presence – to coin the cliché, it’s as if the van wasn’t there.

In turn, the Rhino was neither lumbering nor heavy and tracked well at the unladen weight (bar a few kilos in the water tanks) with the Ram’s and its own stability systems combining nicely with the exhaust brake to offer a trouble free experience.

As standalone offerings the Goldstream is a sub $100k, well built and enjoyable caravan that promises longevity and the ability to stand robust use. With its 3500kg ATM it’s towable by most of the ‘regular size’ utes but at their legal limit – which many people exceed without trying – and so your combination would actually benefit from buying a Ram-size Dodge to tow it. Better to under-strain the relationship than to tax it heavily. And the Ram offers so much more in its skill set. A town car it isn’t, granted, but if your travels are frequent and large-scale then this is the ute for you.

PROS
• All round capability
• Cabin comfort

CONS
• Trim on entry door window
• Too many keys 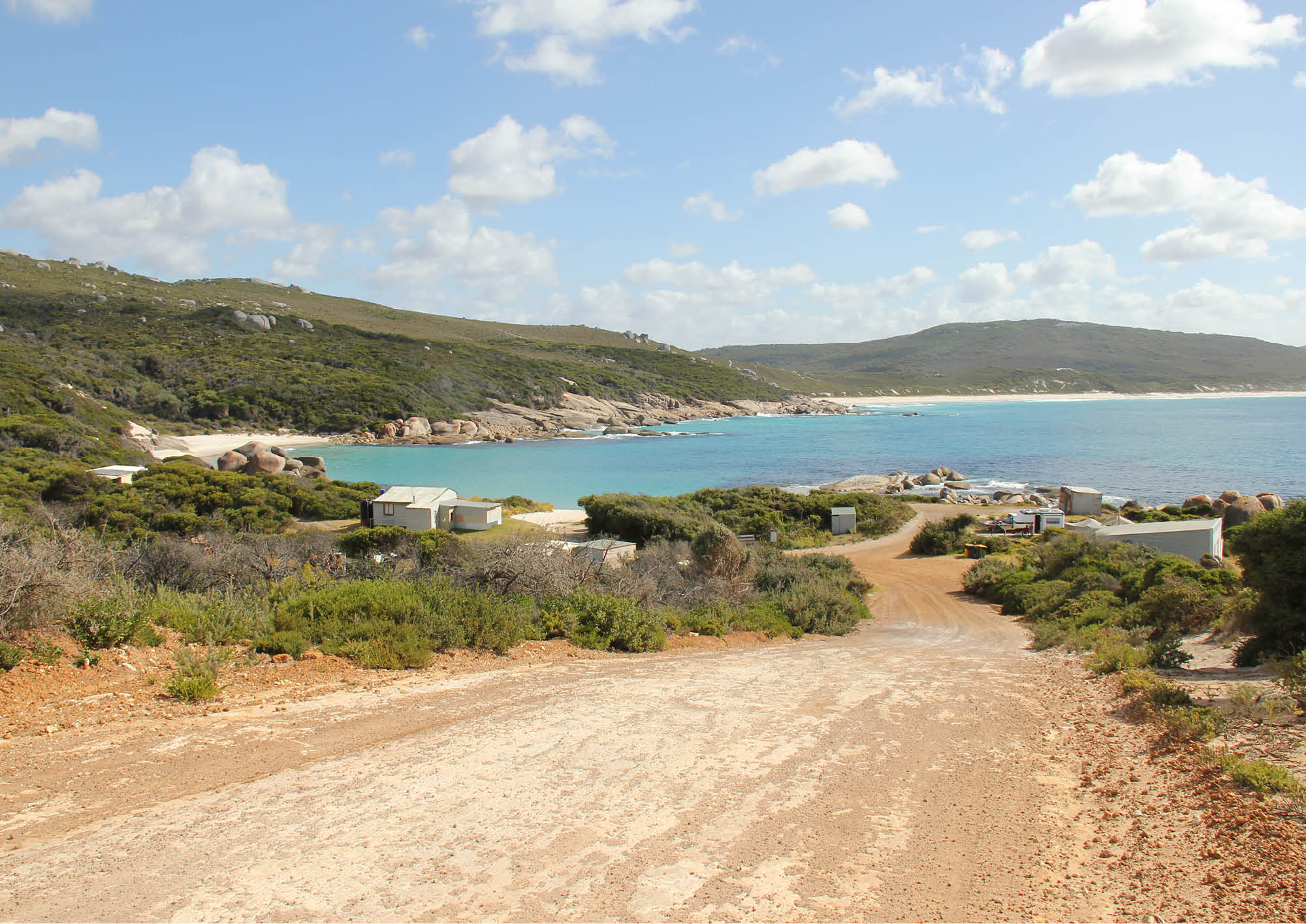 Make Like a Salmon and head to Betty’s Beach 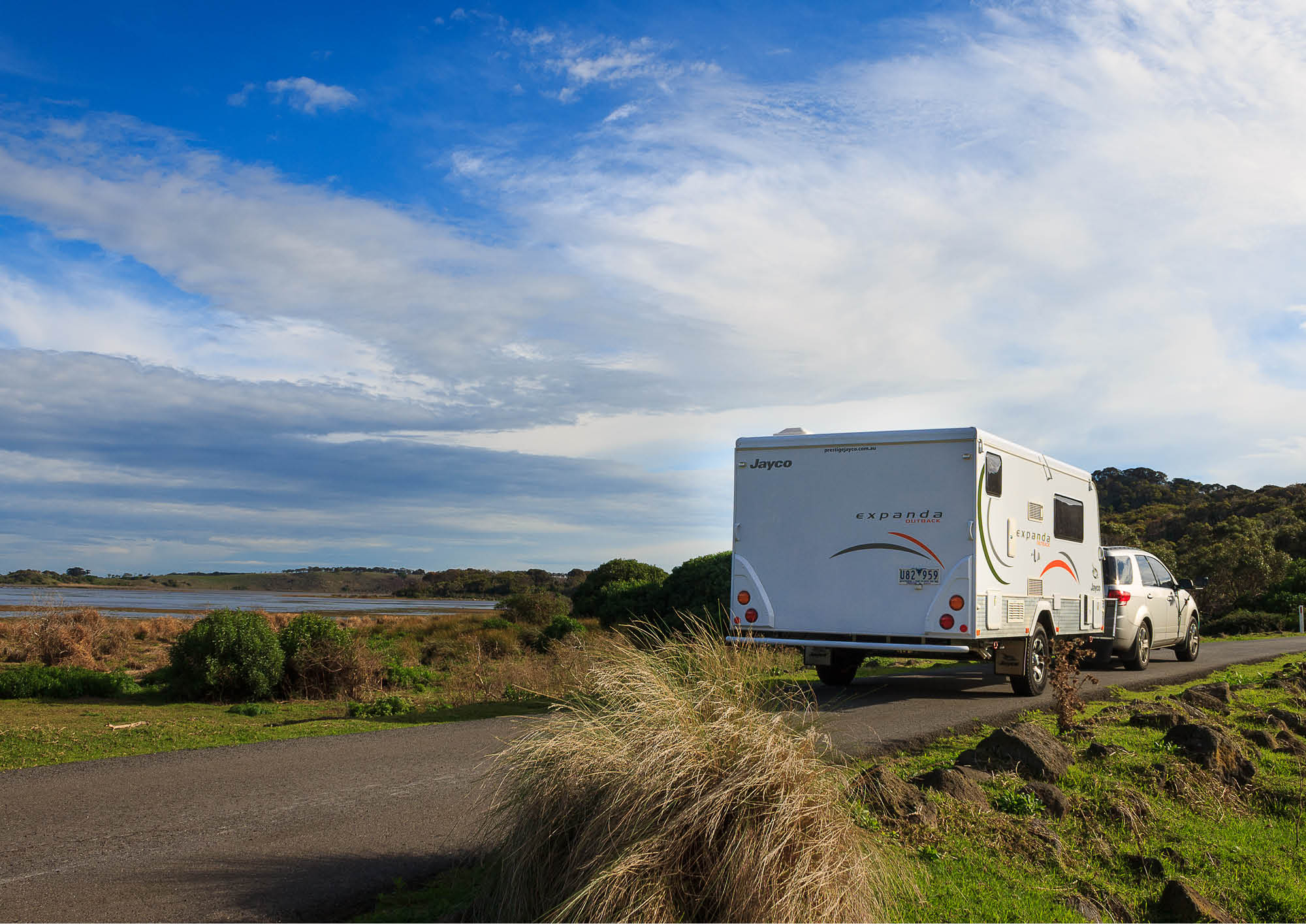 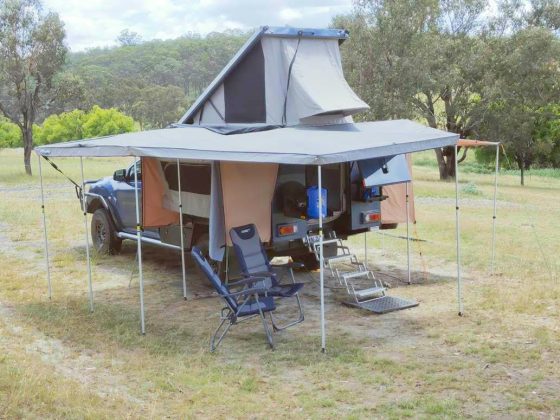