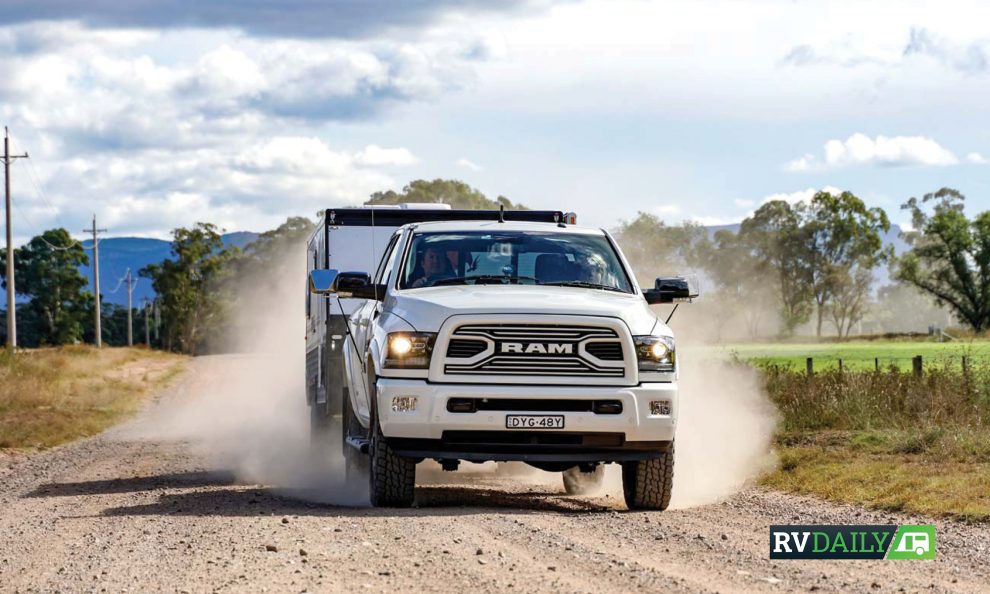 Bloody big trucks, coming over here, stealing our (big) jobs. Except they’re not. Well, not stealing just big jobs. They can do the little jobs too, as I found out during two weeks living with a RAM 2500.
The large, US-derived vehicles polarise opinion. Something that has such a presence can do that. I suspect that a lot of this negative opinion comes from perceptions about their planet-destroying stature, and their appearance – the RAM does have a distinctive nose – the left- to right-hand-drive conversion, or not having driven one.

It’s the latter of those situations that critics need to address if it actually matters to you. And if you tow anything large, it should matter to you. It’s what these vehicles excel at. And they fill a very large hole in the range of vehicles and their abilities in the Australian market and a hole that exists because of the trend of larger and heavier caravans.

The difference is that in their home market of North America these vehicles are run-of-the-mill family and work transport, just the way that HiLux, Ranger and the rest fulfil the top job here. Despite the claimed towing attributes of the local utes (and wagons), they’re running out of puff when it comes to towing everything legally. Yes, there are engineering options in terms of GVM upgrades to overcome this shortfall, but there’s a cost involved. These vehicles do most things straight out of the box. Albeit, also at a larger sticker price.

Obviously, I’m in the “love them” camp and have been since I drove an F250 nearly 20 years ago, and whether that casts aspersions over me compensating for a shortfall in the trouser department, well I will leave that open to conjecture. 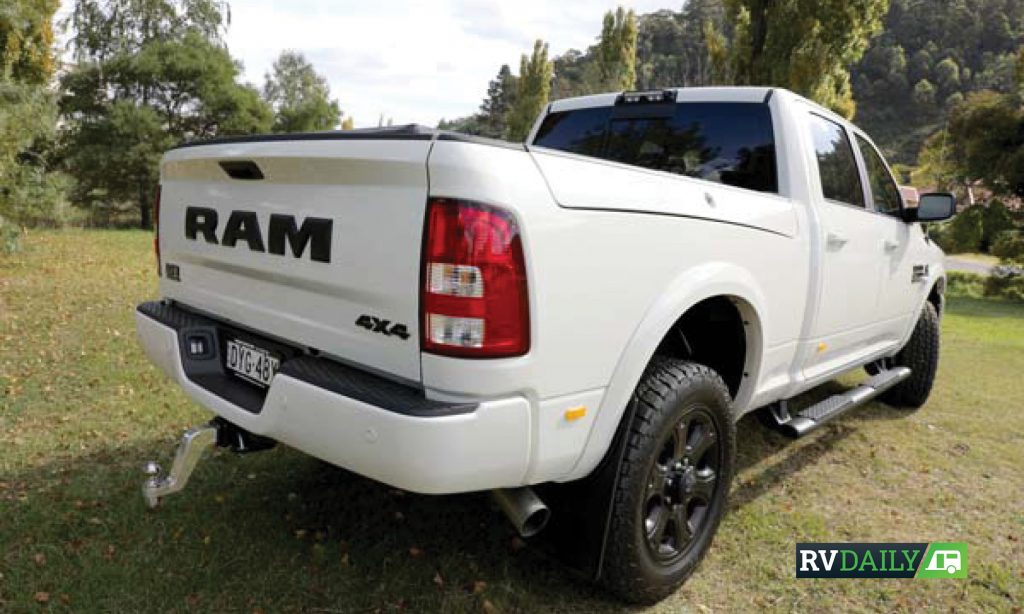 WHAT’S AVAILABLE
There are currently five main models in the RAM range: two V8 5.7-litre Hemi-powered 1500 versions in Express and Laramie spec, and then three 2500 Heavy-Duty models in Laramie, RamBox and Sports Appearance variants equipped with a 6.7-litre, inline-six Cummins turbo-diesel. We were lent the latter. In a crackling, bright white paint the words Titanic and iceberg could be brought together again but without any sinking feeling.

The term RamBox refers to the lockable boxes either side of the 6 x 4-foot tub that have drain holes and can be filled with ice and 140 tinnies each side for your tailgating party, which is a trend that’s surprisingly never taken off here. We seem to prefer the type of tailgating that features on dashcam videos. With that in mind the RAM has two cameras out back; one on the tub and one on the hitch and you can check on both as you drive. Of course, the rear-view lens features strongly on the large U-Connect touchscreen that makes hitching-up so straightforward.

RamBox-spec also includes the tough, spray-on tray liner, adjustable tie-down system and the cargo divider that can be employed with the tailgate down to add 60cm in tray length (think: quad bike). All this was covered with a tri-fold tonneau that seals very well via latches within the tub. The only dust we found was around the tailgate. There’s enough room for Aussie pallets with up to a 913kg payload depending on what you’re towing.

We headed for the weighbridge to make sure everything was legal. With an advised ball weight of 200kg from the 3400kg ATM Ezytrail Parkes 18 specs, and with water tanks full totalling 230 litres (and kg) the van weighed 3300kg, the RAM 4100kg for a GCM of 7400kg; under our 7990kg allowable GCM. We had two space cases of recovery gear and tools, plus our camping furniture in the tray, camera gear in the rear seat area of the RAM and our bedding, clothes and food in the van. Wheel arch measurements showed the fronts rose 2cm and rears dropped by 4cm at this set-up.

The RAMs are all-coil suspension but the Sports Appearance model uses Bilstein shocks and runs 20-inch black painted alloys with Nitto 275/65R20 A/T rubber. Of course, you can’t say anything about the ride is car-like, it’s a truck, and a 4X4, but the suspension absorbed the load we imposed with composure and a great ride. That said, there was some harshness through the steering from down below on certain rough surfaces and the steering was knocked out to the left a little after we hit a surprise and huge pothole at about 80km/h near Penrith. 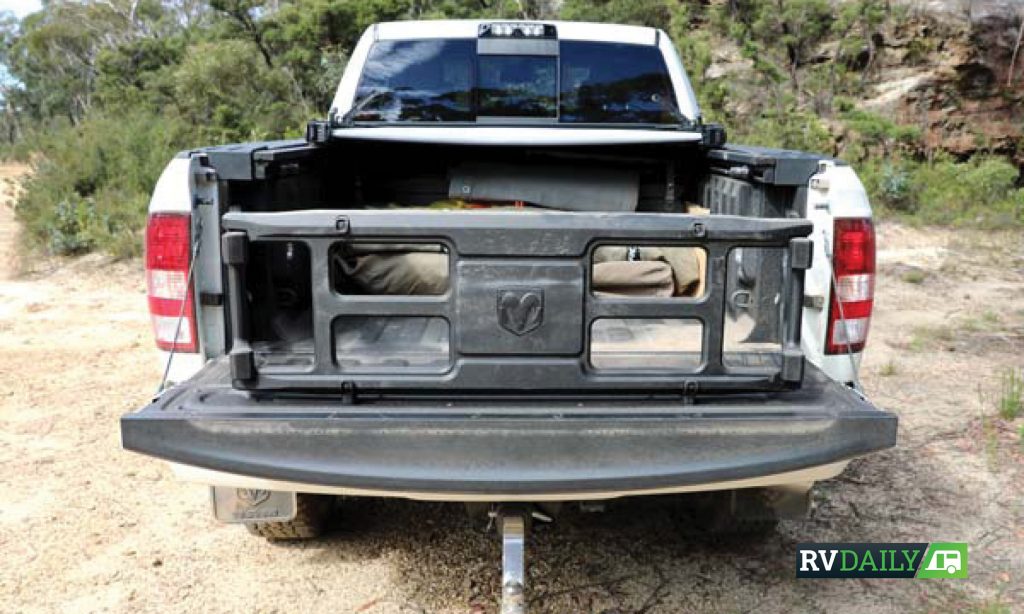 HOW DO I LOOK?
The performance from the 3577kg (kerb) RAM is startling. While in town, it’s a lazy, barely off idle trundle for the truck; press the throttle with any meaning and the urge is incredible. And it’s irrespective of a load in the tray or on the towball or both. Maintaining a safe cruising speed while towing out on the highway is a relaxed job, there’s no stress in just keeping up with traffic, in fact, it’s more a case of setting the pace. A semi-trailer anywhere near us upset nothing but the towing mirrors. Cruise control makes sure you keep your licence safe because it’s very easy to see the digital speedo read higher than you’d like. The elevated driving position and excellent view of the road through big glass mean you’re very confident of surroundings. It’s worth noting though, that the RAM’s extremities are a long way off and it takes time (and parking sensors) to become familiar. Despite this, we went to Woolies and Officeworks and used their normal carpark spots without taking the paint off anything.

Our Sports Appearance Pack had optional side-steps fitted but the clamber up means you’d want to specify these on any 2500 RAM. While they allow a dignified entry, there was something satisfying about sliding off the edge of the seat down to the ground in one go missing the steps, in a truck-style dismount. Maybe that’s just me.

The RAMs are dedicated for towing. Tow hitch, factory electric trailer brakes, and ESC system with Trailer Sway Dampening and an exhaust brake plus the aforementioned cameras and assisting visual guidance on the screen for coupling make sure that everything is covered off. The exhaust brake works a treat and retarded progress on many a steep downhill to mean a feet-off-pedals approach accompanied with a low growl from outside (though not in residential areas …). 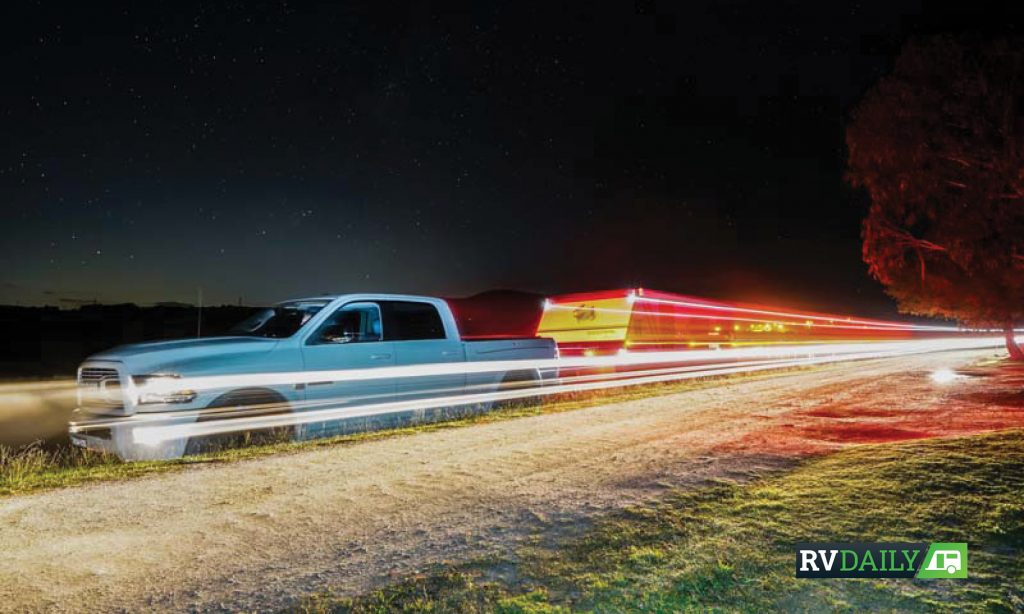 CABIN CLASS
In other residential areas, the cabin is spacious. No complaints from rear-seat occupants either. Or, if there’s none back there you can flip up the seats and fold out dedicated sections to make a completely flat floor and there are several storage options beneath too. If you flip the padded section between the front pews you make a third, so that’s belted seating for six. The RAM utilises a column gearshift so that frees up the transmission tunnel area. Seats are all leather, heated, cooled, even the steering wheel has a heat option and if you fancy warming or cooling the cabin prior to your journey you have the option to do that too via the key fob. You can start the vehicle remotely with the doors locked.
The U Connect focused via the touch screen in the dash takes in all apps and communication duties and there are menus in the instruments, that look after everything from the trailer brake gain to the engine idle time. Along with 13 cup holders, multiple charging points, a sunroof and even a 240-volt power outlet in-dash from a 100W inverter, you’re covered for comfort.

VERDICT
Firstly, this RAM variant is the top of the range and comes in between $150- and $160,000 depending on a few options. The cheapest, V8 petrol version is $79,950 and there are nine spec variants all up. The Aus-spec RAMS are meant for right-hand drive markets, and the dash consoles, etc., are made in Mexico and shipped here for installation. Yes, the price is way above the US home market and there is most definitely a need for factory RHD versions.

Still, what we have here is a vehicle that takes up the reins for safe, heavy towing duty while still allowing for a healthy payload without exceeding legal weight limits that, unfortunately, many caravanners still seem to do. A 200 Series or a Patrol offers choices under a RAM’s pricing but struggles to offer the same when it comes to the numbers for towing and payload. In this set-up, the critical factor was the fuel use at 23L/100km. We were a 7.4-tonne rolling mass and kept for the most part at the max speed posted, as in, we weren’t driving for economy: so we were rewarded! Even with that said, you could make your own call based on your driving styles.

I stand by my original point: with the current appetite for heavy caravans, heavy-duty vehicles such as the RAM 2500 Laramie make perfect sense. 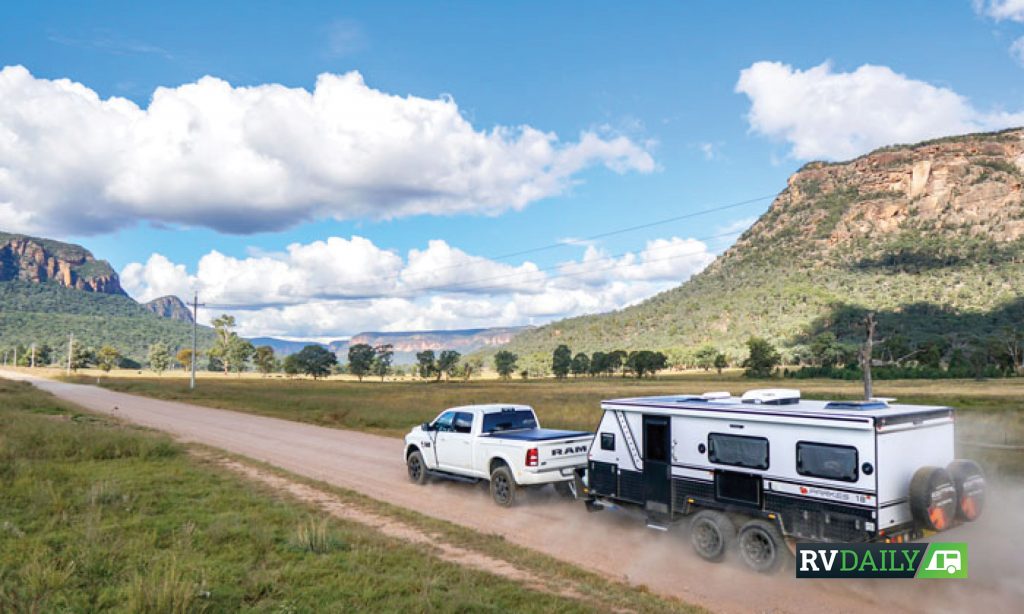 CONS
Fuel use
Size will intimidate some buyers
Variant price 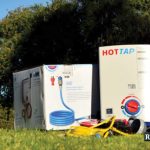 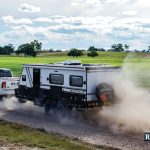