There is one key feature that is required in a family van and that’s beds. Bunk beds specifically need to be functional and have enough space for young bodies to grow. Jurgens Caravans has tried to address both these ideas – but has that goal been achieved?

With a large array of family vans on the market these days, it seems they are making a big comeback. Jurgens Caravans is playing in this market with the new Jindabyne twin-bunk model. There are five versions available in the Jindabyne range: Two queen-bed models, two ensuite models (one with a double bed and one with a queen-size bed) and our review model, from Amazing RV (a Jurgens dealer in Melbourne) which is the bunk van with no ensuite.

The design brief behind this range is that the units are single-axle, pop-top vans that can sleep up to four. They have a roughly 18ft external body length and are very lightweight, with tare weights under 1450kg to make them towable by a huge range of vehicles on the market. They also all have a reasonable set of standard features across the range; to provide an attraction for many buyers Jurgens places a focus on affordability.

Manufactured in Melbourne at a purpose-built factory in Pakenham, Jurgens starts with a fully-engineered hot-dip galvanised chassis system that is proven to handle the rigours of touring and yet is lightweight and durable. Suspension-wise an AL-KO IRS system is used in conjunction with shockers and, as touted in the brochure, it’s dirt-road proven. Braking is handled via 10-inch off-road electrical units and alloy rims are shod with 14-inch road-biased tyres.

The body is manufactured from Duratherm walls, which are a composite product featuring an aluminium skin, timber and styrene inner panel with a plywood layer covered by the internal lining. One thing Jurgens vouches for is that no wiring or plumbing runs through the walls from front to back – which means the wall integrity is never compromised.

A one-piece pop-top is used for the roof and while it offers good drainage and strength we found pushing it up and down took a bit of effort and was quite difficult. This may have been due to lack of technique or newness; however, it’s a point to mention.

The front and rear panels are fibreglass with insulation and a one-piece Integra floor adds strength to the overall package. Double-glazed windows feature around the body. There’s one thing that’s very obvious with this package, and that is the unique ‘style’ that means people will easily recognise it as a Jurgens van!

Around the body, standard items include drop-down legs, AL-KO coupling and a jockey wheel. In the front boot are twin 4.5kg gas bottles on one side and spare tyre and tools on the other. Protecting the front of the van as a standard feature is a stone protection blanket. A Carefree awning and picnic table are also standard. A couple of storage lockers provide a home for the touring items.

There’s a tap on the A-frame and an 80-litre water tank underneath, providing water to the 240V/gas Truma hot water service. The lighting is provided by LED units throughout, which drains very little from the on-board battery and electrical system. This Jindabyne has a few options available, one of which is ESC (which is certainly a worthwhile one). The other external option that was fitted was a reversing camera… which is also a good inclusion to have.

Overall the external look and mechanical package is neat and tidy. It’s practical and it simply works.

The biggest ‘ah-ha’ moment came when I stepped up into the van and realised that Jurgens has done an amazing amount of planning to get a double bed, bunk beds, a dinette and a kitchen into the 16ft, 1in body. It’s pretty impressive.

Starting from the front, a double bed is mounted island-style against the front wall. There is plenty of storage in overhead cupboards as well as in wardrobes on either side of the bed. Under the bed there is a bit more storage, although a Finch heating/cooling unit with ducts takes up some of this space. I don’t see this as a bad thing and it gets that unit hidden out of the way.

Between the bed and the bunks on the driver’s side wall is a Dometic 128-litre fridge and above that an NCE microwave. This design has also allowed for a shelf to be installed above the fridge for keys and the like.

The bunks are quite groovy in their design. The top bunk is fixed and is just under 2m in length and 0.75m wide. The bottom bunk functions as a two-seat dinette with a removable table that fills the middle section of the bunk. This bed space comes in at 1.85m by 0.75m. A ladder that frames cupboard storage is used to access the top bunk. It’s a very clever use of space.

Within the bottom bunk is a shelf, which is handy; while on the wall to the fridge is the water tank gauge, TV antenna point, power points and a battery monitor. Again the design team at Jurgens have done well utilising the space available.

An L-shaped kitchen runs along the back wall (from the bunks) and around the passenger wall to the dinette. This corner-style kitchen features a good-size sink complete with a mains flick mixer and a hand pump system.

There’s plenty of cupboard space above and below the benchtops in the kitchen and in the dinette area as well; plus a great corner storage area with a tub that lifts out to expose a generous-size pantry.

A Thetford ‘3 & 1’ cooktop and grill is on hand for cooking duties, along with a rangehood to whip away the steam and smells. A splashback will protect anyone sitting on the dinette seat which is quite close to the cooker. The L-shaped dinette runs from the kitchen wall to the entrance door and will fit four just snugly.

As far as interiors go, this bunk van is well designed and on first glance appears very practical – from the second dinette/bunk bed to the shelf above the fridge to put things on while accessing the fridge contents. There’s a lot going on in this van… and just enough room to function inside.

We spent quite a few hours driving this Jindabyne on highways at up to 100km/h and there were plenty of back roads chucked in for fun. I can say the van sat behind the Cruiser really well. Sometimes single-axle vans can be a bit unpredictable to tow on rough roads or at speed; yet the combination used on this little van works a treat. It handled our journey with a little grace and style.

I reckon this little van is a great thing for its towability, compactness and features – considering the body size of just over 16ft. The other point that’s great is the ATM weight of under 1750kg, making it a van that will suit a broad range of vehicles on the market.

I can see a lot of advantages in this van, and for folks out there that might say 40 Gs for a van without an ensuite… well Jurgens has other vans in the range with bunks and ensuites, however, they are bigger vans. No, the Jindabyne PT bunk van is built for a purpose and at a keen price. I think it will do well in the marketplace. 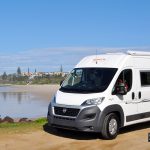