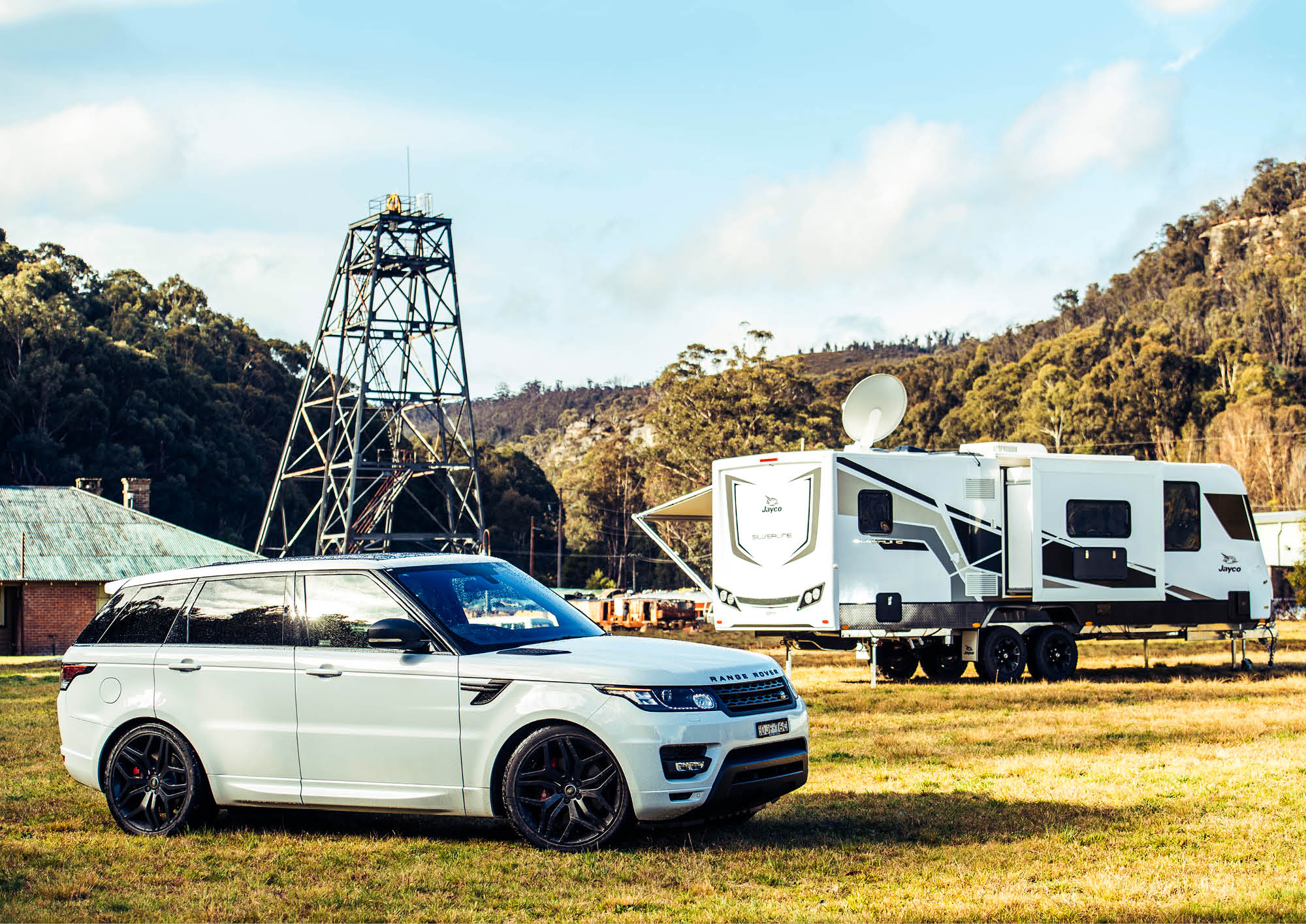 Anglo-Australian relationships often need translation. Does this Range Rover and Jayco pairing lead to a strained or a ripper combination?
Words by Tim Scott photography by Brett Hemmings

Look, I can’t afford one either, but the Range Rover Sport is very much relevant despite being beyond the reach of many. It’s a fantastically engineered and extremely capable vehicle with full off-road hardware (and software) that’s only really limited by the wheel and tyre combinations offered as standard. But that’s not the focus of this test, and despite those that decry any Land Rover product using outdated perceptions or without having driven a new vehicle, we were lucky enough to test this Sport SDV8 HSE as a tow vehicle, in its more regularly used domain of on-road surrounds.

Similarly, the Jayco Silverline Outback is at the top of its range and also dominates in its presence. We opted for the 25-foot, 2780kg Tare model not only to offer the Range Rover a dimensional challenge, given the 4.4-litre turbo-diesel’s 240Kw and 740Nm performance figures but superficially it suited in terms of appearance. At a glance it reminded me of Top Gear’s The Stig. Whatever, they were a dynamic pairing.

Having hooked up the Silverline at Jayco’s western Sydney outlet, we didn’t view the pair from the outside until we stopped in Lithgow, our destination for the day. It was quite a shock to see how small the Rangie looked given its monstrous power capabilities and a driving position that makes you feel not insignificant.

Despite that, the Jayco had behaved impeccably on the journey. Once we had dialled in the Redarc Tow Pro Elite electric brake system to the correct setting things progressed very smoothly. I’m no towing expert but even I knew that getting shunted every time I dabbed the 380mm brakes on the Sport wasn’t quite right. I was still familiarising myself with the length of the combination so the feeling was jarring in every sense. Vision was fine, although we lacked mirror extensions, which would have helped, although backing up to the Jayco’s drawbar was easy enough using the Rangie’s rear camera assist with in-dash visuals. An interesting point about the towbar on the Range Rover is that it doesn’t have a locking nut on the underside so that the towbar rattles noisily by hand when in place. This, though, didn’t translate to any kind of physical or audible intrusion once hitched and underway.

The first test was the M4 motorway that leads to the Great Western Highway over the Blue Mountains. Joining the traffic flow and reaching a cruising speed was never going to be in doubt as the Rangie pulled us effortlessly forward. We sat at a steady 90-100km/h and our pairing only gently reacted to the side blasts of numerous passing semi-trailers. The Range Rover employs technologies such as Adaptive Dynamics and Dynamic Stability Control to make minute adjustments to the suspension and braking across all terrains. What this means for towing is that it’s so stable a package the caravan is in turn not reacting to a tug that’s continuously fighting the road. While that’s an oversimplification of a complex system the reality is that we never felt the mass of a roughly 6000kg combination being wayward.

The Jayco Silverline rides on a proprietary independent suspension called J-Tech using a twin wheel, coil arrangement that no doubt contributed to the stability of this particular pairing. The J-Tech suspension also pairs with the AL-KO chassis and electronic stability control or ESC to minimise and control trailer sway in caravans properly loaded and driven at under critical speed (See page 21 of this issue for a full feature on ESC).

Lapstone Hill is the benchmark test hill at the foot of the mountains that takes in 90 and 70km/h zones as it climbs up and a nice right-hand curve in the middle; it was despatched without fuss, although mid-way produced one of only two or three instances of the Rangie holding gear a little longer, rather than a seamless upshift. You would have to be really keen or in demanding conditions to ever use the manual ‘sports’ mode on the eight-speed ZF transmission, it’s faultless under its own direction.

We cleared the lower mountains, but if only the same could have been said for the skies and the rest of the drive was conducted in pouring rain and mist. Our photographer, Brett, made the most of the individual climate controls and turned up his seat heater. It would be his turn to cope with the conditions once we reached Lithgow, the tinted glass roof provided an alternative view through which his artistic eye could enjoy the raindrops.

The State Mine Heritage Park sits in the valley on the road up to the well-known Glow Worm Tunnel in the hills behind Lithgow – Sydney four-wheel drivers’ would have used it often but may have passed the railyard full of varied rolling stock wondering what it was. We were lucky to have access to the sheds for two reasons – they were full of interesting stuff and it was somewhere dry for Brett to take the shots from.

The Silverline Outback tops the Jayco caravan line-up. It’s a family van with a queen bed at the front, a large living area that has a slide-out for the lounge and diner – you can option to swap these main features – with two kids’ bunks at the rear opposite an ensuite that has a washing machine.  As you’d expect from a large volume manufacturer such as Jayco there are a multitude of materials and finishes to choose from. This model sandwiches a series of browns between white ceiling and a light timber effect vinyl floor – the leather dinette seating around an adjustable table offers enough room for the whole family.

The island bed is in a nicely lit area at the front with large windows on either side and the black ‘visor’ on the outside is a shield for the window above the bed head. Twin wardrobes offer good hanging space and there is shelving above the bed head and reading lights and as you’d expect under bed storage is available and generous. While there is room for three suitcases, I’m not convinced by the battery box and water pump being located under there, too. All windows open outwards and are fitted with curtains, pelmets, privacy blinds and insect screens. Up top is a manual roof hatch nearby the manual wind TV antenna although this Outback had an optional SatKing automated satellite VAST TV system on board.

The kitchen runs along the nearside wall and has plenty of lightly coloured and gloss finished cupboards and drawers, as well as decent prep space, although the window on the kitchen wall is small. Maybe this lack of a view is offset by the TV mounting on a panel above that faces the lounge beyond. It’s a curious arrangement, as behind the TV are the readouts for water tanks, etc. and the stereo head unit, which in itself is awkward to reach, but it all seems in conflict. The sink is fitted with square section chrome tapware with a water filter, and a rectangular sink has a chopping board lid – a point to note as the benchtop looks as though it would be easy to mark. Cooking takes place on a Dometic gas/electric stovetop with grill and oven plus the 900W microwave is above the rangehood, which has lights to augment the overhead downlights for the kitchen. There are lots of power points in this van to look after everyone’s electrical needs. Finally the Thetford fridge is a 174-litre three-way unit.

The rear section of the outback – that can be screened off – is devoted to the twin kid’s bunks, on the nearside wall (both with windows) that are separated by a wardrobe from the large ensuite. This space has a large shower with powered vent, a Thetford swivel toilet and a nice vanity set that also accommodates a Sphere 3kg washing machine – perfect for keeping the family clean and clothes laundered.

External storage is plentiful, with a large boot on the front and twin 9kg gas bottles in a nearside locker. There is a wind-out full length Carefree awning above although we had hassle opening that as the pull-down tag was missing. The Dometic entry door is the twin panel design that allows a security screen to be left in place and the outer skin clipped open, and the step is manually operated. The undercarriage is high off the ground with great clearance in the wheel arches plus all plumbing and wiring seems well routed and the twin 82 litre water tanks are protected with a shield.

The slide-out has an external hatch to reveal the back of the seating area, sadly it also revealed some bare screw points emerging from the timber seating frame. This seems an oversight as the locker on the driver’s side that will accommodate long items was finished properly. The drawbar has a metal tray to store things such as firewood, it has a tap, too. Also standard is the Tow Secure breakaway system with an AL-KO hitch to go with the AL-KO chassis.

VERDICT
So while appearing in virtually identical team colours, how did the Range Rover and Jayco pair up in terms of match fitness, to use the sports clichés. There’s no doubt that despite having the credentials to play away from the bitumen both of these vehicles will spend the majority of their lives on paved surfaces. However, as we said at the beginning this test was to rate them in terms of a towing combination and on that score they worked as a team. Neither let the other down and offered a stable platform which made for a relaxing day in trying conditions.

The Silverline Outback offers very comfortable family accommodation for Australia’s buyers and packs a lot into its generous frame. Despite dominating the Range Rover in profile, the combination of its underpinning chassis, suspension and ESC and streamlining meant it was not overbearing to tow. A couple of vagaries in quality control detracted from a top-flight status but overall it would cement it’s place in the starting line-up for most looking for a van of this type.

The Range Rover Sport HSE TDV8 is a vehicle powerful enough to tow a van of this stature anywhere, and when unhitched is a dynamic and luxurious sports tourer. Despite the individual price tag, when coupled with a van at the Silverline’s price point it’s obvious that there are plenty of people who can afford such a combination. Sadly, I’m not one of them.

The budget here is on par with some top-flight Cruiser and caravan pairings, certainly with big US utes or, of course, larger motorhomes. However, none of those drivers are left with the Sport’s qualities as a standalone car.

THANKS
We must thank Ray Christison and Barry Noble from the State Mine Railway Heritage Park in Lithgow for allowing us to use the grounds and making sure we were looked after on the day. You can check out the museum or take a tour during opening hours: 12-4pm, weekends, and public/school holidays. Other times by arrangement. The museum is on State Mine Gully Road, Lithgow NSW 2790