How the Ed did his nut in Tasmania Bacon. By the ocean. Why had I never experienced this before? I enjoyed a bacon sandwich or two sitting on the step of the Winnebago, looking out over a still uncooperative Bass Strait. Dead calm. Gentle laps at the beach were all that were on offer, although it’s obvious that the ocean can do much landscaping to the coast here.

CLICK HERE TO READ THIS TRAVEL ARTICLE IN OUR ONLINE MAGAZINE The only fossil here was holding the camera

Here was Fossil Bluff on Wynyard’s fringe. There are fossils among the evident layering of time in the cliff walls, but you can only reach them when the tide is out. And it was in. So that was that.

Boat Harbour. I’d read about it and it sounded very appealing. But as is the way in Tasmania, distractions abound and I found myself (no, not in a Byron Bay way) deviating to Table Cape Lighthouse. Being belted by another sea squall, I didn’t learn much about the spot. I have subsequently learnt, however, that it’s the only lighthouse in Tassie open (nope … ) for tours and the views are incredible – especially over the tulip farm. In spring. Which it wasn’t. So that’s two tips you now have for your trip.

Back in the driver’s seat, the sun busted moves and the road ahead looked brilliant. Now wanting to make a bit of forward progress I felt guilty bypassing the Thistle Hut café. It looked new, with rustic timbers and country garden, and I like to support new ventures, but I wasn’t really ‘getting anywhere’. For you though, there’s easy parking out front and right under a local info sign board.

A cluster of hill-borne houses hold court over twin scoop bays very different in geology and that are separated by a small headland (and loop walk). Boat Harbour Beach, to give its full title, is just right. It may well be heaving in peak times but in March it was comfortably busy. There’s a beautiful sweep of beach in front of the Surf Life Saving Club – café, use it, it’s great – then the other bay is a remarkable array of jagged reddish rocks with some sea spray action. Rock pools abound when the tide is out. Which it was. So I took advantage. Up the coast from Boat Harbour. I’m not positive but that might be the Nut at Stanley right at the end. Don’t take my word for it though, go see for yourself

The grassed area all along the shore of the second bay offers unallocated spots to camp, some with open views and some with a tree line between you and the sea. I found a spot with a view between trunks and backed up the Bondi, opened the rear doors and rested in front of a vista you travel for. And it’s free. There is an amenities block just over by a carpark but of course the sites are all unpowered. If you need to plug in, the local holiday park will offer powered sites by late 2018.

Morning. The water running along the camper’s entry step under the whizz-bang door told me something wasn’t right. It had been dripping but now it was definitely a leak. I got permission from Apollo to have someone look at it – can’t go pulling someone else’s vehicle to bits – and I managed to track down what seemed the only caravan repairer in the area, James Lohrey, in … Wynyard. Yay.

I hate backtracking, so a left turn off the highway, called Tollymore Road, offered a new view on my return to Wynyard. The Tollymore lookout is wonderful but the limited parking space (it’s essentially a layby) means it’d be better if you’ve left the van somewhere. Tulip farms abound.

In town, James pulled the cupboards apart to find my water source was simply an O-ring on the canister for the water filter. He removed it and the job was done. James, who is also an auto electrician, took time out of renovating his whole house (on a two-week timeline) to sort me out and testament to his expertise was the fully restored Expanda in the front yard in which the family were living while he did the house. Judging by the vintage caravan by the shed, I think he likes projects. I like James.

On the road once more, this time I stopped in at the Thistle Hut Café and grabbed a coffee and some delicious shortbread creations; a chap needs to keep his sugar up.

Apart from the decidedly sinister smelter building at Port Latta – I loved it and feared it all at once – the cruise to Stanley was sunlit and breezy. The wind was up and enough to bring white caps to the bay as I found my spot to camp at the caravan park. My back doors faced the ocean and I felt cosy with my two doonas – but that was for later. First I had to look around town. 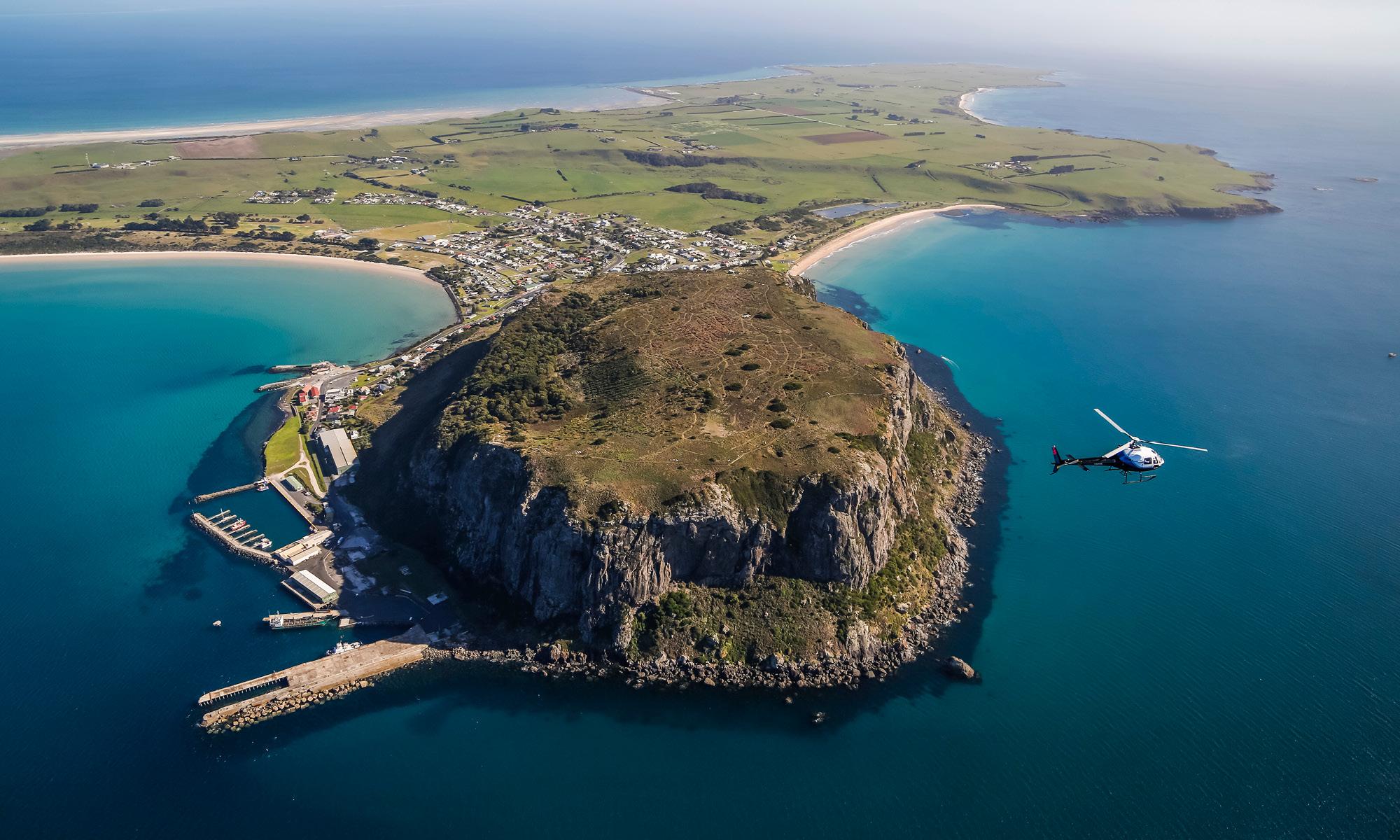 My budget didn’t run to a chopper, or a drone for that matter. Big isn’t it?

Stanley’s obvious draw is The Nut, I mean, you can’t miss the rock behind which the town huddles. The Nut is a volcanic plug, and has a flat top, which is wonderful if you walked up its near vertical sides. The zig-zag track? 770 metres of thigh burn. You can take the chair lift too, but my ascent was after it had closed for the day and I was desperate to capture the sunset. The view was worth it even if the sunset wasn’t spectacular. And I had a pademelon stand on my foot! An unexpected pleasure.

Stanley has a little harbour, full of mainly red trawlers when I was there, and I thought the town would have been built on fishing but apparently it was merino wool for the Van Diemen’s Land Company. Highfield House is a local landmark built in 1837 for the company as its HQ.

I’d had a delicious fish and chips – which was my first Striped Trumpeter – from local emporium Hursey’s to steel me for the Nut and I spent ages wandering the streets lined with heritage houses, but as the cold really started to bite it was home to the Winnebago and my doonas. I was beginning to realise that these towns were not going to be given the time they deserved in the two-week timeframe, such is Tasmania’s surprise nature. 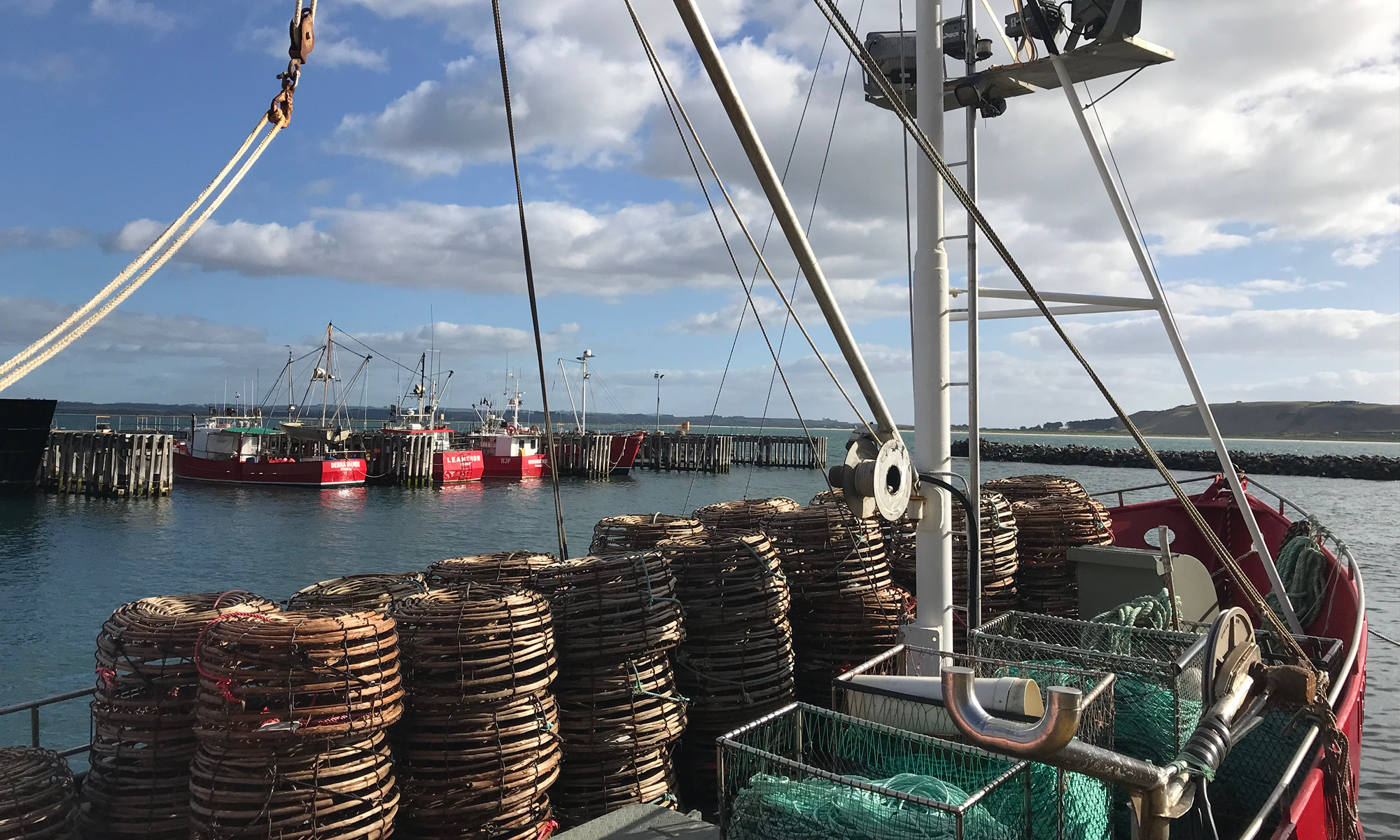 Stanley’s fleet kept me occupied for ages, they were so photogenic

Stanley council also offers low-cost camping ($8 per night) at the showground for fully self-contained vehicles. It’s where I would have stayed but I couldn’t ascertain whether power was available and with my one night on, one night off policy, an established caravan park gained my custom.

Thanks to information from a well-seasoned camper in the most well-equipped if battered 70 Series LandCruiser I have ever seen, I bypassed the large Stanley Visitors Centre and went straight over the Smithton to check out their “brilliant visitors centre”. Which, I’m guessing, maybe used to be such, but is now a handy unstaffed kiosk with a direct phone line to the, you guessed it, Stanley Visitors Centre.

I needed reassurance that I would be safe to take the Western Explorer in the campervan. Despite the chap in the Crafter in Wynyard saying it’d be fine (see above paragraph for how accurate people can be) I wasn’t taking chances in someone else’s vehicle. Anyway, Stanley Visitors Centre allayed my fears and I set off for a Tarkine merry-go-round, with caves, coffee drought at the edge of the world!

I should have kicked off with a diesel fill in Smithton. I tried, but the self-serve Caltex unmanned station wasn’t co-operating. I blame the staff. Next door, the United was overflowing with traffic, probably because of the Caltex and so I headed off thinking “what’s the worst that can happen, in rural Tasmania, with patchy phone reception?” Actually, I added the phone comment for dramatic effect, most of the time coverage was no worse than the mainland.

The destination for the day was Arthur River and I could have gone the well-worn path via Dismal Swamp but I opted to see Trowutta Arch. It’s well signposted and not a long drive; there’s a bit of dirt road but nothing challenging. In fact, there’s even a caravan turning circle at the end of the road. And then you’re in the wonderful rainforest. Cool, green, lush, on the path to the arch. This cave collapsed and formed two sink holes, one filled with water, one dry. It’s one of the best examples in Tassie according to the information signs. It’s a great site but hang on to the kids – it’d be easy to lose them into the abyss. Trowutta Arch is on The Tarkine Drive, a tourist route that takes in several fascinating spots to visit

From there, the C124 offered the most uninspiring drive of the whole trip. In part marred by the fact I was preoccupied with the fuel gauge but also you’re hemmed in by trees until you reach the startling Couta Rocks. White gravel tracks take you to the pounding surf on the western shores of Tasmania, and I was amazed at the collection of houses with wonderfully individual design.

I followed the road north to Arthur River in search of that night’s camp and fuel – I was only half-way happy. One of the self-registration National Park’s camps, Manuka, offered a little site between the trees that kept me right out of the wind. Manuka is great for large groups too, with open grassed areas.

Late in the afternoon, and out of season, Arthur River felt a bit bleak. Famous for its cruises up the waterway, under leaden skies, I only had time for a while spent on the lookout at The Edge of the World. Fearsome surf ran ashore, as I watched huge logs end their journey from who knows where along the coast and form a tangled collective upon the rocks like a prehistoric bird’s nest.

It was a powerful natural display, and I wondered what the morning would bring as I turned south and still without fuelling tackled the Western Explorer. I had roadside assist, right?