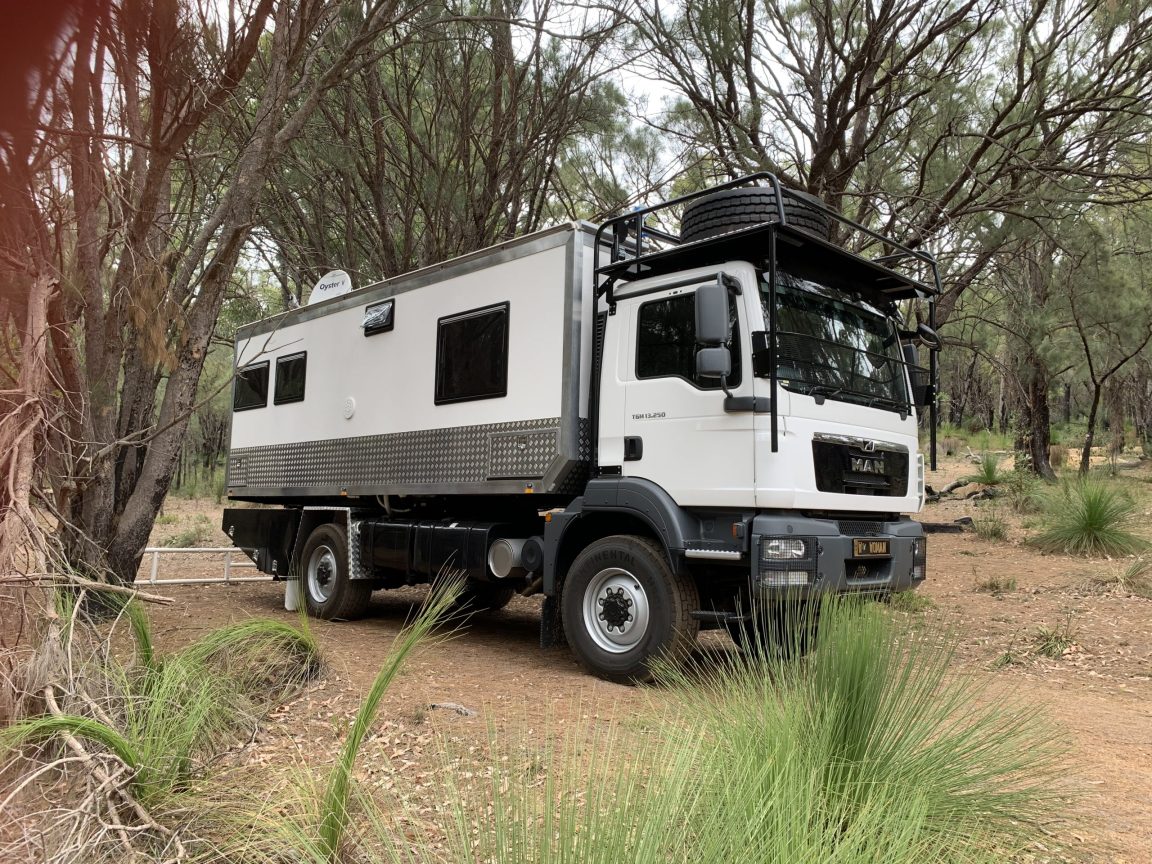 Building your own motorhome from scratch is going to be a big project. Building a full off-roader makes the task even harder. For Michael O’Leary, doing it while suffering the debilitating effects of a stroke took it to a whole new level.

My wife and I started remote outback holidays in the mid-’90s touring in a Suzuki Vitara. We fitted everything we needed in that vehicle to enjoy the great outdoors. We took the little Zook to many destinations including the Great Central Road, Karijini, the Gibb River Road, Kakadu and Litchfield NP, to name a few. Most fellow travellers we met were in disbelief when we rocked into these locations in the Vitara. However, like most people, we got older with a little more disposable income available after the kids left home. From here we began our progression to travelling with more creature comforts.

We purchased a camper trailer which was great for holidays that didn’t require frequent moving but after several trips being constantly on the move, we tired of the whole set it up and pull it down routine. We started going to various caravan and camping shows looking for alternatives and sharing our thoughts with other travellers including my parents who are caravanning and camping veterans. We decided we would like a 4×4 truck based motorhome and started perusing this idea.

At that time, almost everyone we spoke to was in opposition to this idea, telling us of all the negatives of a 4×4 motorhome. Eventually, we gave into these opinions and purchased a locally manufactured full off-road caravan. This was a great purchase and served us extremely well for several years. In the back of our minds, we still thought about the truck and at every opportunity, we would quiz owners we came across about their likes and dislikes of this mode of transport.

There were two opinions that were consistent across these owners:

1) Your average motor home was not designed, built or equipped to do off-road holidays involving miles of gravel roads.

2) Most truck-based motorhomes were underpowered for the job with a lot of owners modifying the engines to try and remedy this.

While on our 2018 trip to The Big Red Bash, we meet two motorhome owners whose vehicles were based on MAN trucks. They were both amazing vehicles that impressed us a great deal. We returned from this trip with the realisation these types of motorhomes were no more complicated than a large box mounted on a truck and we both felt sure building one was within our capabilities.

My experience and skills were first gained when I was a 10-year-old youngster helping my father who was a wood machinist and cabinet maker. In my mid-thirties, I did cabinet and furniture making as a hobby while running my own motor trade business. My great friend Alan, a man with an unbelievable list of talents and accomplishments in the building and construction industry, started to take an interest in our project and his assistance would prove invaluable. Between the two of us, the idea started to take shape.

I used our 200 series Landcruiser and Explorex caravan as a base rig to benchmark the required power to weight ratio. This ruled out most trucks leaving just two base vehicles for consideration. One was a Hino 500 and the other a MAN 4×4. The MAN won due to several factors. The power to weight ratio of the Hino was within the range we wanted but it was towards the lower end of the scale. The flatbed length was also slightly shorter than what we required. The MAN had the advantage of being fitted with disc brakes and rear air suspension. It also exceeded our expectations with cabin noise levels and drivability. My wife does around 90% of the driving and she was very comfortable with the MAN. It is simply a joy to drive.

With the decision of the base vehicle made, we started to look for a layout that suited both of us. After considering some we settled on an Explorex caravan design that had just been released on the market. Explorex Caravans owner Greg Ferguson and I have developed a great relationship over the years and he was good enough to let me use this layout for the project.

Next was to come up with a budget to satisfy my wife and have some idea of what the project would eventually cost. We looked at what type of construction we wanted to use for the living capsule and eventually decided on vacuum coated FRP. Alan’s caravan was made out of the same material and, after five years of countless kilometres on gravel roads including two trips along the Gibb River Road, it was still in great shape.

Once that decision was made, we engaged an engineer to do the design and engineering work. In January 2019 we ordered the truck and in April we started constructing the living capsule. Originally, we estimated a build time of three weeks but that blew out to nearly seven months! We received the capsule in October and the truck in November 2019. We could finally get down to some serious work.

That was until January 2020 when COVID-19 reared its head and slowed everything down. Due to the slower pace, we were in and out of the capsule most days allowing us to get a better feel for how our layout would work for us long-term. Whilst the design remained the same, almost everything else with the internal build changed. The extra time enabled us to make better choices that we believed would enhance the liveability of the motorhome. We settled on using Blum household fittings for the cabinetry construction, Asko pyrolytic oven and induction cooktop and a Mitsubishi household split air conditioning system.

Sometimes it’s the little things that have the biggest impact. We increased the depth of the kitchen bench to 750mm. This gave us more drawer space and an improved food preparation area. This was very important to us as we both love our food and cooking. We also enlarged the front tunnel under the bed so it could take two fold-up Brompton bikes in their suitcase. The bikes are protected and stored away out of the elements and they don’t interfere with other items stored in the boot. And after many discussions, we finally found the perfect place for the Webastow water-heater.

The electrical system for the motorhome was designed and installed by Paul Kearns from Install A Gadget. When it comes to off-grid electrical systems, this man is one of the most knowledgeable technicians in the 4×4 and RV industry. With his input, we installed a 600-amp-hour Lithium battery system with 1800-watts of solar on the roof. This is managed by a Vitcon Quattro 5000-watt inverter/charger running the 240-volt appliances with a separate 3000-watt inverter dedicated to running a 275 litre Samsung inverter fridge and a smaller 40litre Engel fridge.

The extra time also allowed us to rethink and change both our fuel and water system layout. We ended up with two 300-litre fuel tanks on the right side of the truck’s chassis, a 360-litre water tank between the chassis rails, a 240-litre water tank at the rear, a dedicated 100-litre filtered drinking water tank and a 140 blackwater tank placed behind the rear differential. If needed, all the greywater can be diverted to the blackwater tank. All four water tanks are connected through the Webastow heater allowing us to heat all the tanks when camping in freezing conditions.

Alan designed a bracket to allow the auto locating satellite dish to be retracted down behind the truck out of harm’s way.

I don’t think the average person purchasing a motorhome understands how much time, effort and experience go into the design and manufacture of a modern RV unless you build one yourself from scratch. For me, this was a project that I wanted to undertake to prove to myself that I can still do things after suffering a stroke ten years ago. I struggled with many things needed to build this vehicle. Simple tasks like doing mathematical calculations or being able to cope with extreme fatigue, all made this a real challenge. I could not have done this without help.

I will never be able to thank my friend Alan enough for the multitude of hours he has spent working with me and translating my ideas that I found very hard to articulate. The frustration for both of us to solve the many problems we faced was enormous. A special thanks to Al’s wife Helen who provided the food in our stomachs we needed to work every day. Truly the best friends a person could hope to have.

I want to thank Greg from Explorex Caravans for letting us use his design for our motorhome build and for the support and knowledge he gave us freely. Thanks also to Drew from DMAC Engineering and Daryl from Advanced Fibreglass Australia for their help in the construction of the living capsule.

I also owe a lot to my wife Robbie for her continued support, ideas and quality control. She made one hell of a taskmaster but that is what was required to achieve the end result.

Would I do it again? Yes most definitely, but in saying that, this sort of project is not for the fainthearted but the end result was worth the effort. 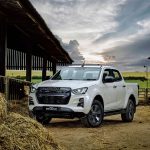 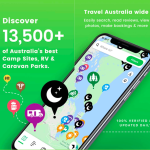