Wonderland RV’s $150k XTR whopper really does have the lot 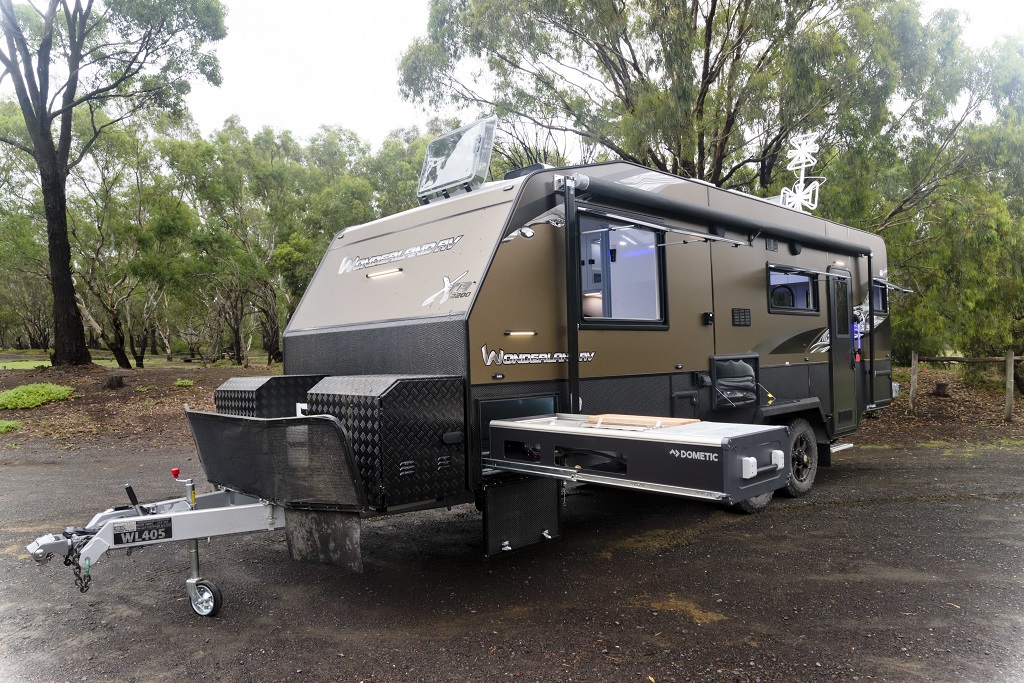 Since this Wonderland RV XTR whopper comes in at just under 150Gs, we knew it had to be something special – more than just a cheeseburger we hoped!

Wonderland RV has gained a reputation for delivering quality custom-built vans that are very well featured for the price. It’s what the family-based team prides itself on. 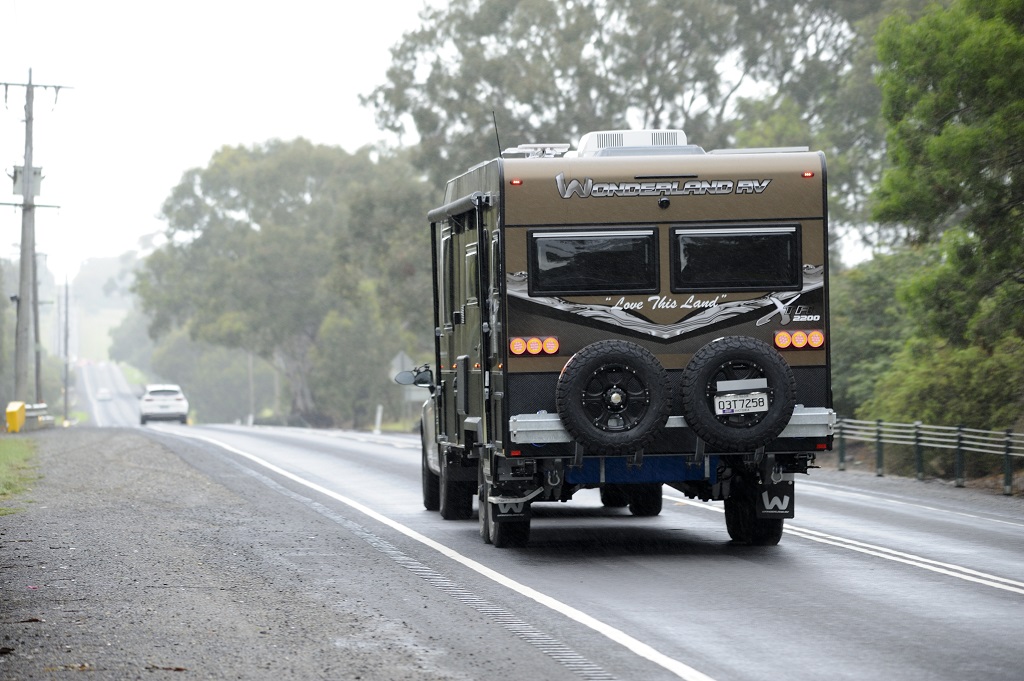 Starting at the chassis, and this feast for the eyes offers a four-inch plus four-inch box silver Road King chassis. A six-inch drawbar is extended to 1900mm to carry the extra gear on the front securely. 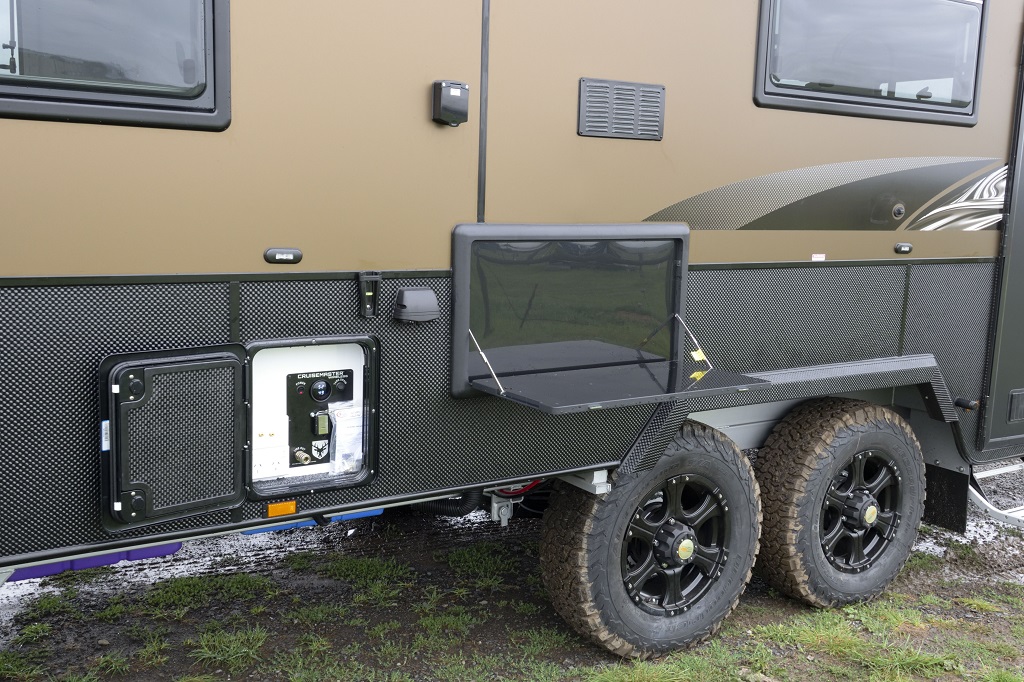 There are two 95-litre water tanks, a 65-litre dedicated drinking water tank and 100-litre grey water to cater for independent camping. Quick fill connections are added for easier tank filling while water gauges are mounted on the kitchen wall. There’s a drop step, the usual drop-down stabilising legs and mudflaps to stop some of the damaging track debris becoming airborne. 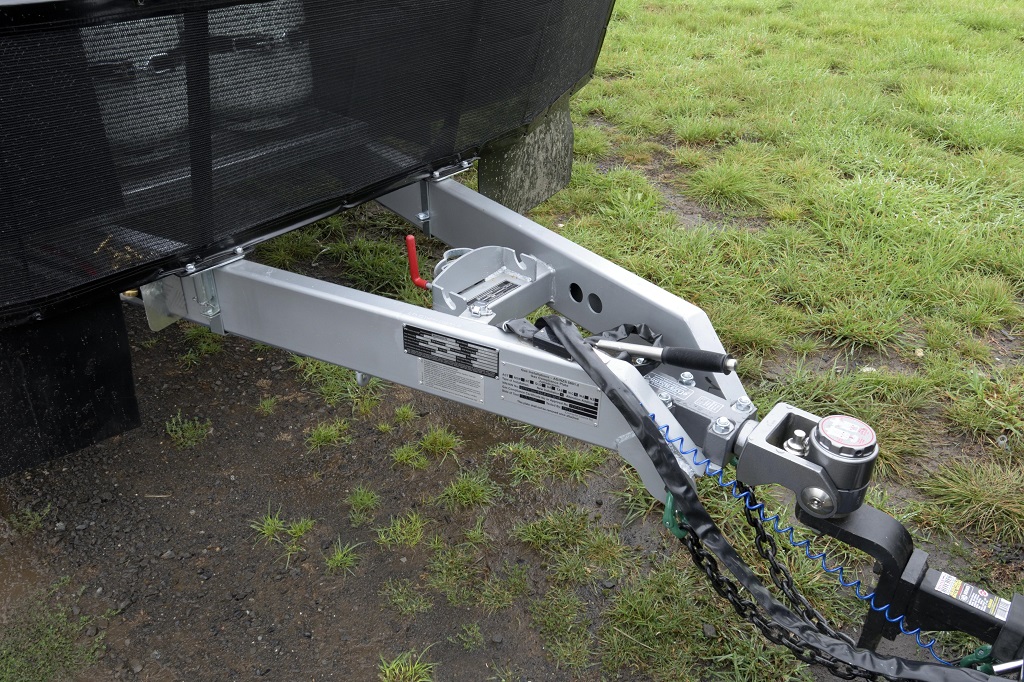 The back of the van holds a four-arm bumper designed to carry two spare tyres as well as twin jerry-can holders.

Some other off-road gear includes skid plates and recovery hooks just in case ambition outdoes skill or good fortune! Other outside equipment consists of an external shower, a box to house the disc brake hydraulic system, 17-litre diesel tank for the Webasto heater and a Safety Dave reversing camera. 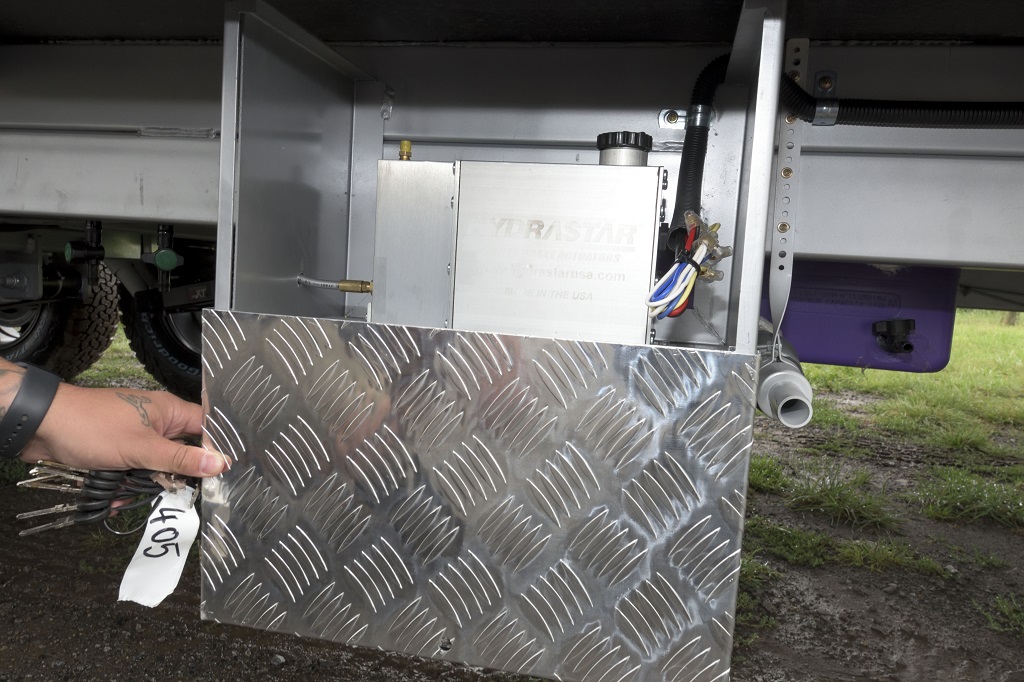 The body is built on a Honeycomb floor, an external Bronze Dibond cladding – an exclusive colour to Wonderland – sets off the rugged look along with all the chequer plate. Ranger double-glazed windows with insect screens match neatly with the other black and bronze exterior products including the Camec door complete with Crimsafe screen. 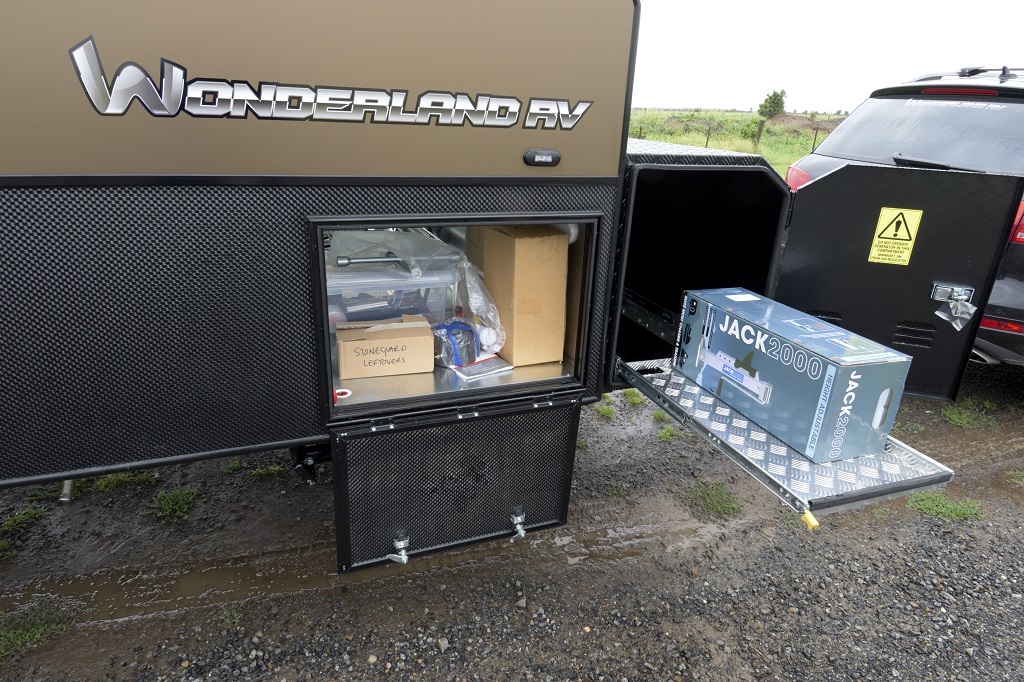 A tunnel boot houses a large Dometic slide-out kitchen with gas bayonet. A full-width Dometic 8300 awning, picnic table, entertainment box, twin speakers and plenty of LED lighting all cater to the outdoor experience. Apart from three awning lights, there are also two on the driver’s side plus one up-front and at the rear of the van. 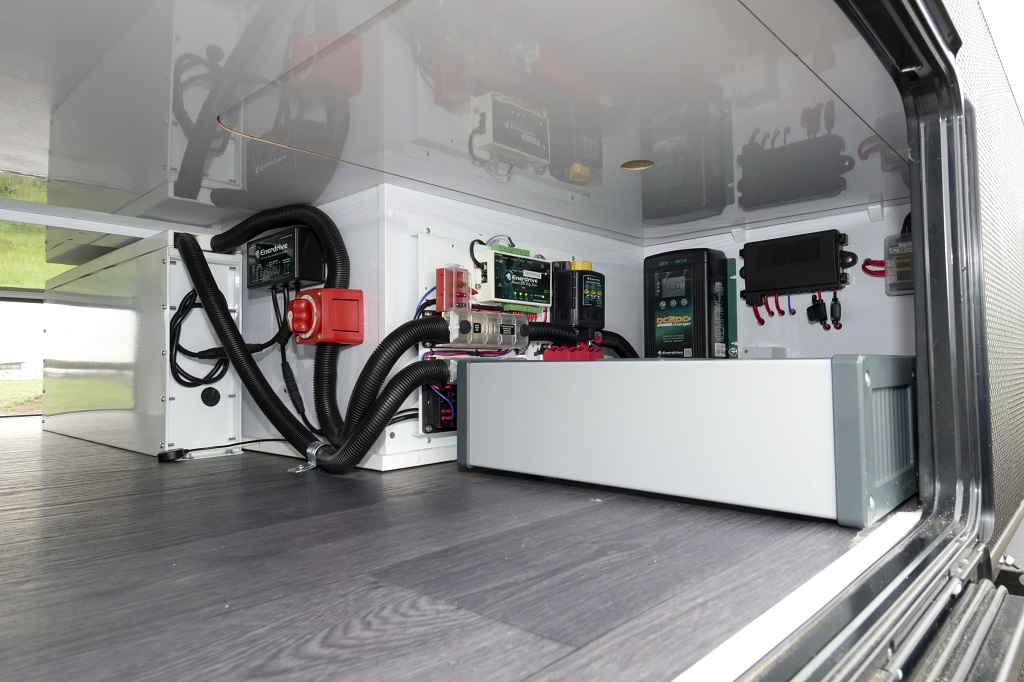 Tech-wise, Wonderland has employed a full Enerdrive Pro Series electrical system to run the van including a 3000W inverter. A 300amp/hr Enerdrive lithium battery also gets a charge from three 200W solar panels up on the roof.

Also on the roof is an Ibis reverse-cycle AC system, Winegard antenna and several Ranger hatches to vent and light up the interior. A Dometic Dust Reduction System is an optional extra for dirt-road touring. 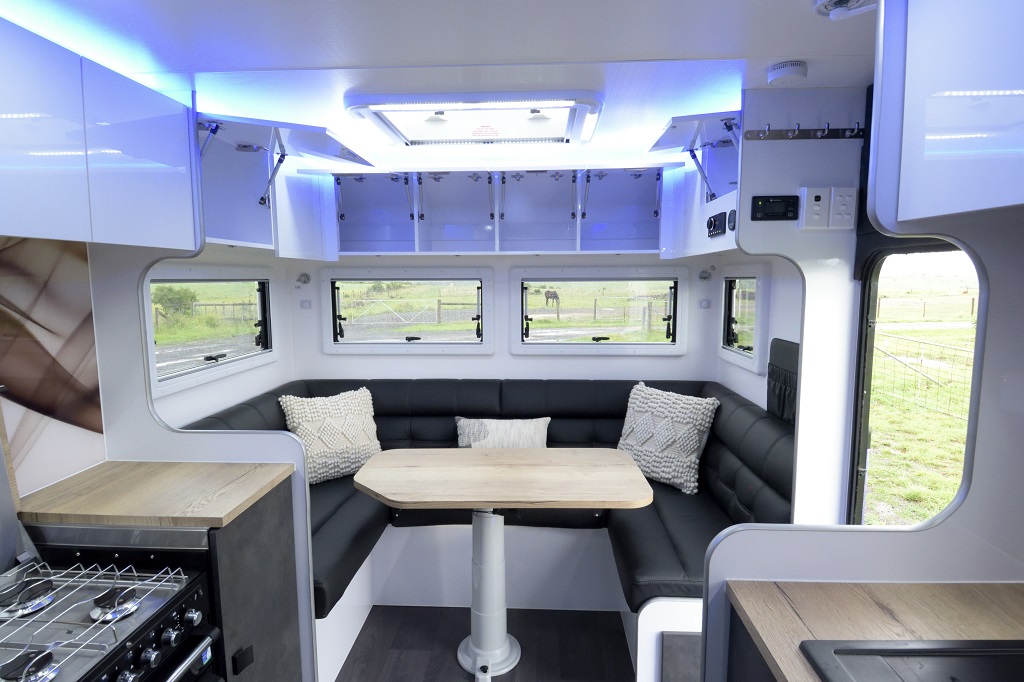 The XTR exudes class from one end to the other of its 22-foot cabin. The interior walls are CNC 19mm structural ply that feature foil insulation and a white matt interior finish. The one-piece roof is fibreglass with an embossed ply matched to the walls. All the furniture is solid ply, double laminated in white gloss.

Stepping up into the van, on the right side running around the back wall is a C-shaped leather dinette with swivel table that also doubles as an extra bed if required. I liked the cosiness of this space; the smaller windows that allow in plenty of light and breeze. There’s plenty of cupboard storage overhead as well as mood lighting. 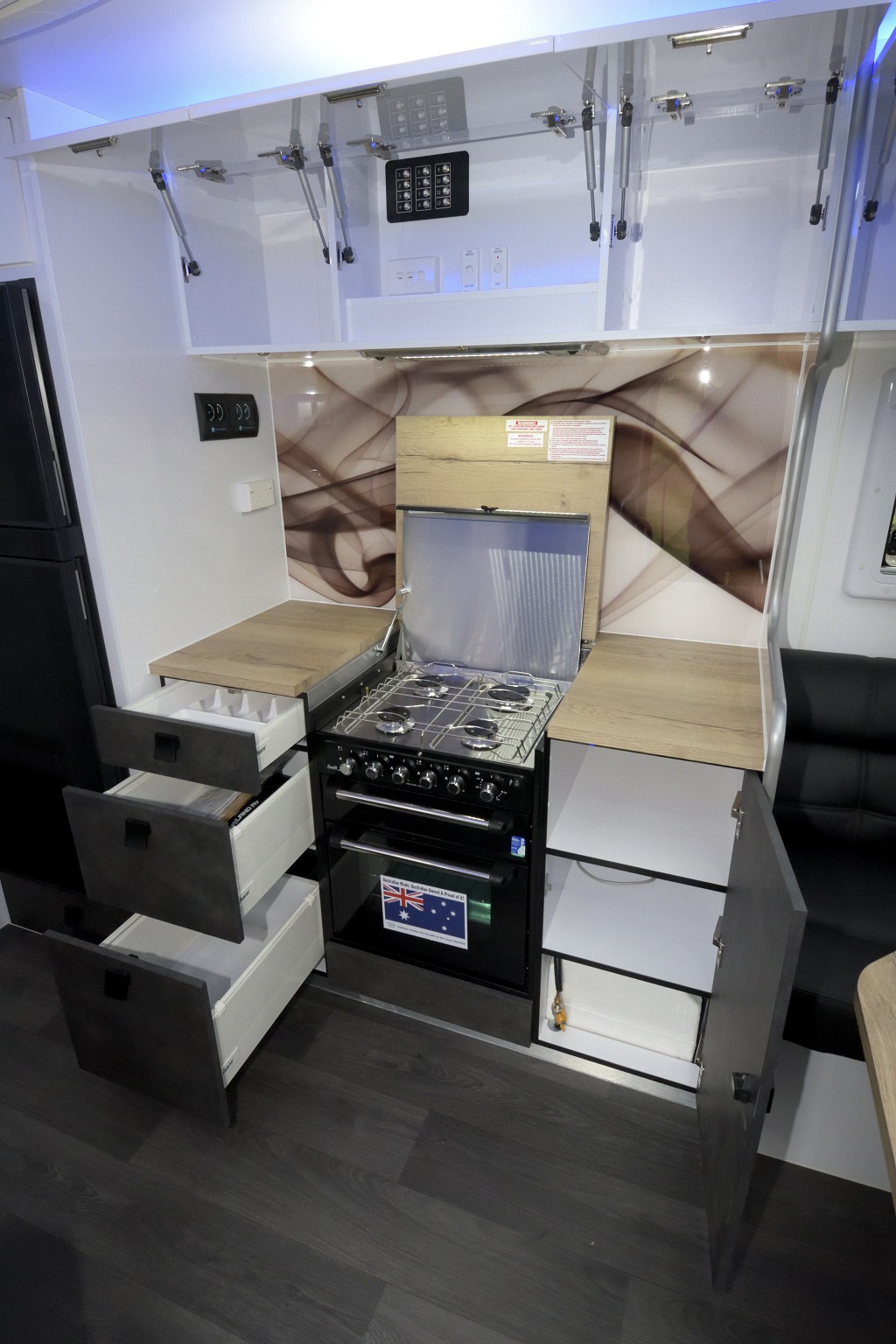 The kitchen is located between the dinette and the ensuite. The primary cleaning and prep area is on the passenger side of the van, and surprisingly there’s a good amount of bench space. The bench is dominated by the black sink complete with black flick mixer unit that also houses the water filter system. With Nikpol Halifax oak, black splashback and white Ranger window trim this is a flash design. Under the benchtop, there’s a slide-out pantry, cupboard storage and the surprise – a Ranger 2.6kg washing machine. The idea is to pull it out, fill it up and set it going and slide it back under the benchtop out of the way.

Above the sink are more cupboards and a Sphere microwave unit. There is a light above the sink, power points and a TV mount and plug on the wall to the shower room. Opposite the sink side of the kitchen is the cooking area. This is again a pretty sassy look with the oak benchtop, and Akril black smoke painted splashback complete with black fittings.

On either side of the recessed Swift cooker with full oven and grill are drawers and cupboards plus there are overheads for extra storage. The middle cupboard above the stove houses the rangehood and inside the cupboard, the switches and controls for the HWS, pumps and fuse system are easy to access. 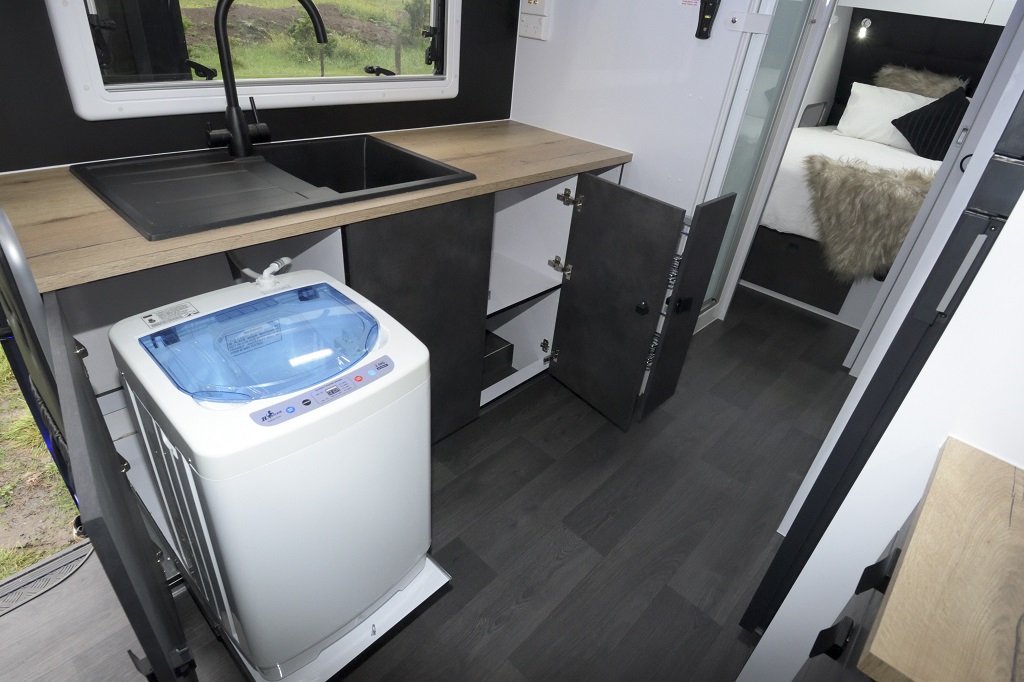 The ensuite is divided into two rooms either side of the corridor from the kitchen to the master suite. The shower room is on the left on the passenger-side wall, and the toilet is on the right. Caravan toilets can be quite plain; however, Wonderland has installed splashbacks to match the kitchen with its timber-style benchtops to liven up this smallish space. A Thetford swivel toilet, vanity unit with smoked glass bowl and an overhead cabinet allow for plenty of storage. Showering duties are managed in the silver-framed, frosted door and fibreglass unit. The contrasting black shower fittings are neat, and a fan and hatch offer ventilation. Concertina doors are used to seal the kitchen and bedroom from the ensuite section and also offer plenty of privacy. 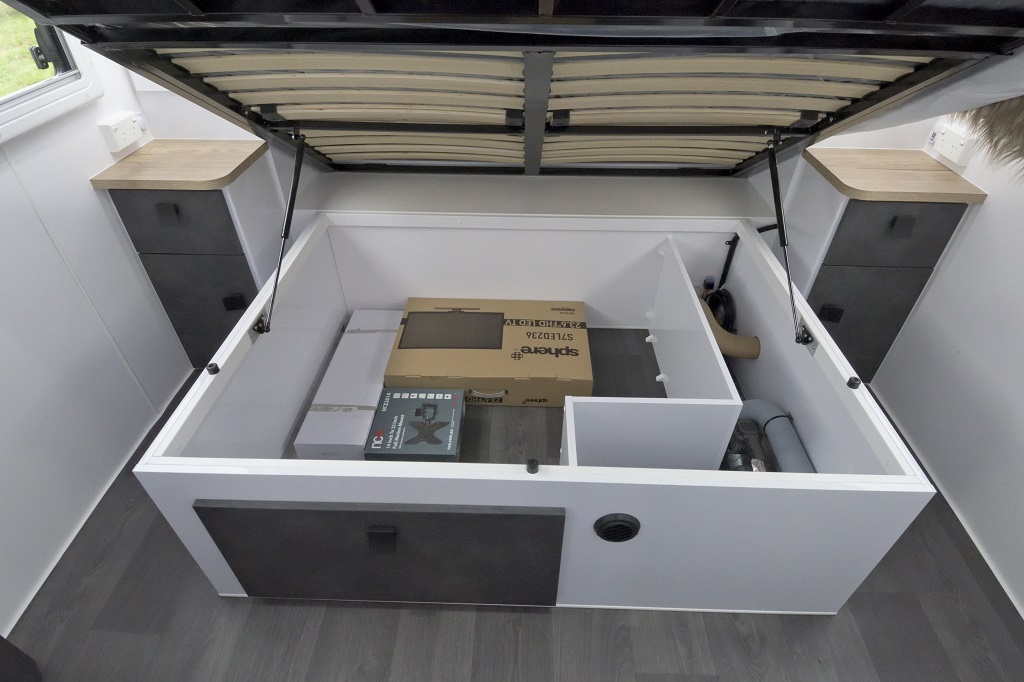 At the very front of the van is the master bedroom. There’s just enough space to walk around the room, which houses an island-style queen bed with full height bedhead and matching trim to the rest of the van. Wardrobes are mounted either side of the bed with mirrored doors and plenty of cupboard space. A lid inside the wardrobe is removable to store items in the can be accessed from the bed and is a smart idea; phone chargers and power points are also easily accessible from here. Under the bed is more storage and the Webasto diesel heating system. A small corner cupboard also offers some storage space. LED mood lighting is cool. A large hatch above the bed and big windows let in plenty of light and breeze. A couple of Sirocco fans also help move the air around. 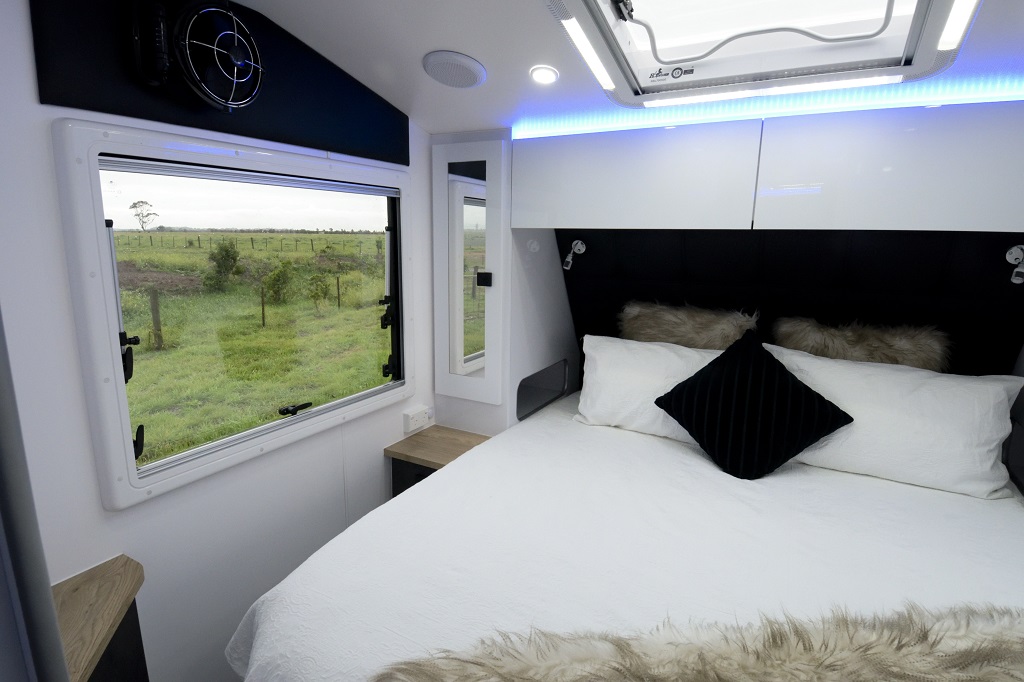 This is one helluva van; from the ground up, Wonderland has created a gorgeous van inside and out. I’m serious when I say there’s virtually nothing extra you’d want on this van – no wait a minute – was there? WiFi, maybe? It’s an option of course – and there’s still a big options list should the standard spec not satisfy you. As a full custom caravan, it’s built well, and with a sense of pride, I reckon, because there wasn’t much to pick on. Wonderland RV was sending this van to the (subsequently cancelled) Perth Show on the back of a truck, and we’d gotten the van pretty dirty due to weather on our review day. The first thing that happened once we got back was the order to wash the van – that says something about the team and their pride in what they do.

Trade-off between features and weight

Will require the appropriate tow vehicle