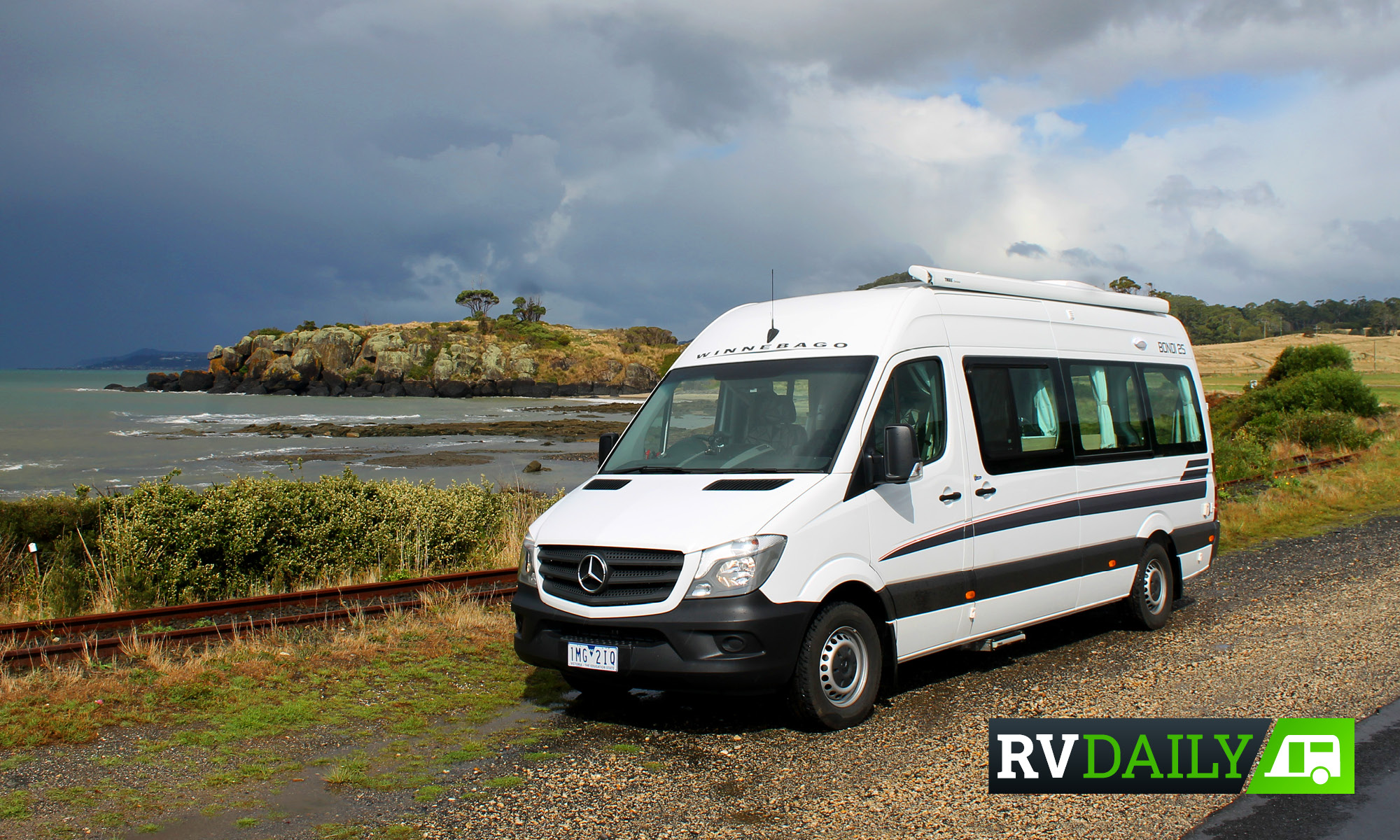 Did the Bondi Hipster have a titanic struggle in the harsh wilds of Tasmania?

This test panned out a lot bigger than first anticipated. And with a different vehicle too. Apollo is the parent company to brands Apollo RV Sales and Rentals, Winnebago and Adria that both cover motorhome and caravan models.

Originally, we’d looked at a review of the Adria 600 SP campervan; just released, hard to come by (for me) and subsequently unavailable, i.e. test model sold! With a sailing date booked on the Spirit of Tasmania I was asked for preferences from the Winnebago campervan range – technically they’re motorhomes as they have a bathroom – but the Bondi 2S fixed bed wasn’t on my list. It’s kinda like the base model and journos are used to having the top-spec versions of anything to test unless they specify otherwise. Cue fat bottom lip.

However, there was method in Jess Adams’ (perceived) madness. Jess is Apollo’s marketing manager and she’d selected this model as “highly representative of her customers’ demands”. And for the trip I’d outlined – arrive Devonport, turn right – Jess reckoned she’d picked the ideal vehicle. And when I say base model, it’s hardly a pov-pack variant given its Mercedes-Benz engineering and Winnebago/Apollo RV market experience. Still, none of this really became apparent until I was sitting in Ross, in Tassie on the last day of my trip. So let me explain why.

There are three main options for vehicle bases in this kind of application: Fiat, Iveco and Mercedes-Benz (MB). A VW Crafter is available too. Gearboxes are crucial to exacting the best from the engines and the 7G-Tronic option from MB is superb. The dog-leg action is firm, so don’t be forceful or you’ll get annoyed, but its manner is decisive and accurate. It’s possible to accidentally knock it into ‘sports’ mode with your knee but I’ll doubt you’d ever bother otherwise in anything other than very hilly terrain. I found plenty of that in Tasmania but still preferred to let the auto decide.

I can’t fault the engine either. Plenty of power, low noise and the urge, if you need it, to prove that not all motorhomes are to be sat behind and cursed at for crawling. The dynamics and suspension control were superb and there were times over twisting and turning B-roads that the vehicle was a smile-inducing proposition. I can’t be accurate but I think I’d be about 100kg shy of the 400kg payload on this trip and there was definitely more to absorb, or settle, in the suspension. The freshwater tank of 86 litres was usually full and I only emptied the grey tank (that can hold up to 60 litres) in caravan parks every other night as I alternated my overnight options. We added a generator too at the last minute, but it remained unused.

The cabin is a swathe of Germanic black and grey, but its function is typically on form. At first I thought that my multiple charging requirements would confound the meagre offerings in the USB department but I was wrong. With a single socket on the dash top, the cigarette lighter and a 12V socket, I was able to keep my phone, WiFi dongle, dash cam and GoPro constantly powered up. Storage is more than adequate to take care of everything from coffee and water to maps, leaflets and towels and binoculars on the twin shelves above the front seats.

The seats have a single inboard armrest and swivel to face the rear easily enough although I didn’t bother with the driver’s more than once as the operation is a pain. You need to raise the seat base before it’ll clear the handbrake and the brake could do with a drop to the floor operation to save this hassle. While seats are personal, I found the under-thigh support on mine a little too high and short plus the material choice on both the front seats and dinette seemed to be losing shape already after our trip.

The dinette strictly matches the two-berth designation of the Bondi 2S with no seatbelt back here and the table top needs sliding toward the front to accommodate anyone who has overfed themselves! The table provides a handy overflow for kitchen prep area but you should specify the flyscreen option so you can keep the factory sliding window open for any length of time while you’re eating here. Under the seat unit lives the Truma hot water system, the Projecta 15-amp battery management hardware and the single 100 AH house battery. We had no solar option on this vehicle but Winnebago lists a 150W panel. We managed to contain all our power needs with a night in a park, night off, and 12.8 volts on the meter with every switch on the control panel to on; from media to fridge.

Now the fridge was a source of consternation. A three-way manual switching Dometic unit of a large 190-litre size, it decided to not run on the house battery after about five days, only gas or mains power. Upon return to Melbourne it was traced to a simple fuse that had come loose, probably following the jaunt down the Western Explorer track from Arthur River to Zeehan. Maybe I should have spotted it but it was mounted face down allowing gravity to help the fuse come loose – needs reworking.

I noticed a water trail along the internal entry step not long into the trip. By Boat Harbour on the NW coast it had become a drip and a visit to James Lohrey Caravans and Auto Electrical in Wynyard (0499 511 129) traced it inside the kitchen cupboards to the O-rings on the canister for the water filtration system. Too tight or too loose, James bypassed it and the water ingress ceased.

Now, the ensuite needs a little rethink too. The Thetford toilet worked a treat, it’s not often we actually test these things, and when we have on occasion they’ve caused a stink. Not this time. The shower could benefit from a roof fan, not just a wall vent, but the shower hose is a spiral hard plastic that scrapes the wall while the vehicle is in motion, with damage noticeable in a week. While the shower rose is adjustable, the soap dish is not and it’s at a height that caught me in the face several times. I’d also suggest the shower cabinet floor, textured to be non-slip, will look very rough very soon if you use the toilet in anything other than bare feet. I loved the Truma hot water system though – faultless and adequate for me to shower in only its steaming output and not at caravan parks.

The kitchen is made up of a Thetford three gas burner stove top and an 800W microwave for when on mains power. A rangehood lights up the stove and extracts the odours and all worked perfectly, although a bench extension of some kind towards the van’s exterior sliding door would be hugely beneficial. I’m not sure how it could be executed, though, so as not to interfere with the roller door access to the kitchen’s shelves beneath the sink. With deep drawers and two overhead cupboards, the kitchen area met my needs very well. All trimmed in the same light tones of timber and vinyl used throughout – it stayed mark free.

With two lengthways storage bins under the bed, plenty can be carried nice and low. One side, that’s accessible from inside, by lifting the bed (it folds) held two large suitcases and a generator with room to spare. The other held hoses, chairs and other odds and sods. Each of these sections is otherwise reached via a door when you open the van’s barn door rear.

Now the folding bed also divided my opinion. It’s great for the storage issue but the firm join down the centre of the mattress was uncomfortable and while okay for a single occupant, two people on friendly terms might find it annoying. A mattress topper may help. I also moaned about the bed being chamfered at one corner. Now this is to help with flow-through movement in the aisle that runs the length of the van, and it’s ideal if you actually use the bed the right way around! (That is, with the head end being against the back doors). I wasn’t sleeping that way, preferring to rest against the shower wall and gaze out to the rear. Outward visibility is great in this layout – every wall is a glass panel. I would definitely option the sliding windows for either side of the van, with flyscreens, as having no opening glass at the rear is a drawback. A roof-mounted aircon is fine for on-power days (and nights) but you can’t beat simple breezes. That said, I had so many ‘gentle’ Tassie breezes that the awning stayed inside its holder the full trip – the last Sprinter I took away came back without the awning attached, so I wasn’t taking any chances this time.

This interior rear layout means there is space alongside the bed for a bike, or a surfboard to be carried if you don’t have racks optioned (you need a towbar for bikes). The lift-up access to the bed means you’re standing in this part too, so you don’t have overhead storage on the wall to match that on the driver’s side. It would make lifting the bed a semi-crouching affair and awkward. Now this takes us back to the start and the fact that I love a rear club lounge and requested that kind of layout – but Jess picking the fixed bed option meant several things that assisted my trip: I didn’t have to make up the bed every night, which would have worn thin on day two, plus the floor space beside the bed allowed me to carry extras like the oversize camping table I’d been given! The vehicle is designed for on-the-move travellers with quick set-up.

It wasn’t just the bed I didn’t work out. The curtains too. (Is there no end to this guy’s daftness?) Now I don’t trust the longevity of the curtain hook options but the material blocked light out fine. It was the fact that the curtains didn’t press-stud to the wall where there were studs on the curtains. Until I worked out that you pulled off the wall ties (press studs) and fastened the curtains to them…

In the comfort and convenience stakes all that might matter to some was the fixed, not telescopic, arm for the TV. It can attach above the dinette, but the person under it can’t watch it nor the person cooking either. And then it can attach in the bedroom, under where I had my head – but if you were propped up against the back doors then you’d both be able to watch it. No wonder I questioned the mount of the 12V socket banging my head. However, no matter which way you sleep there’s no bedside table for drinks, books, phones nor teeth. Swings and roundabouts, I guess.

There are options for this vehicle in layouts and hardware. The range takes in 2S, 4S and Trinity that mean beds in different places, among other things. But for the 2S fixed bed, go for the solar and all the sliding windows with flyscreens, blinds for the driver’s cabin; the AES three-way fridge.

I approached it from the wrong angle, but with two weeks, moving off every day and alternating between free camping and caravan parks’ power, it made perfect sense.

I was leaving the caravan park in Ross when the park owner said, “That’s a really nice van”. Mulling over what she’d said, everything settled. Yes, it was a nice van and for two weeks it’d fulfilled its obligations well. It’s neither extravagant nor overly expensive and I’d had my preconceptions altered.