THE VIDEO CARAVAN & MOTORHOME PUBLISHED HOW THEY GOT IT ALL WRONG! 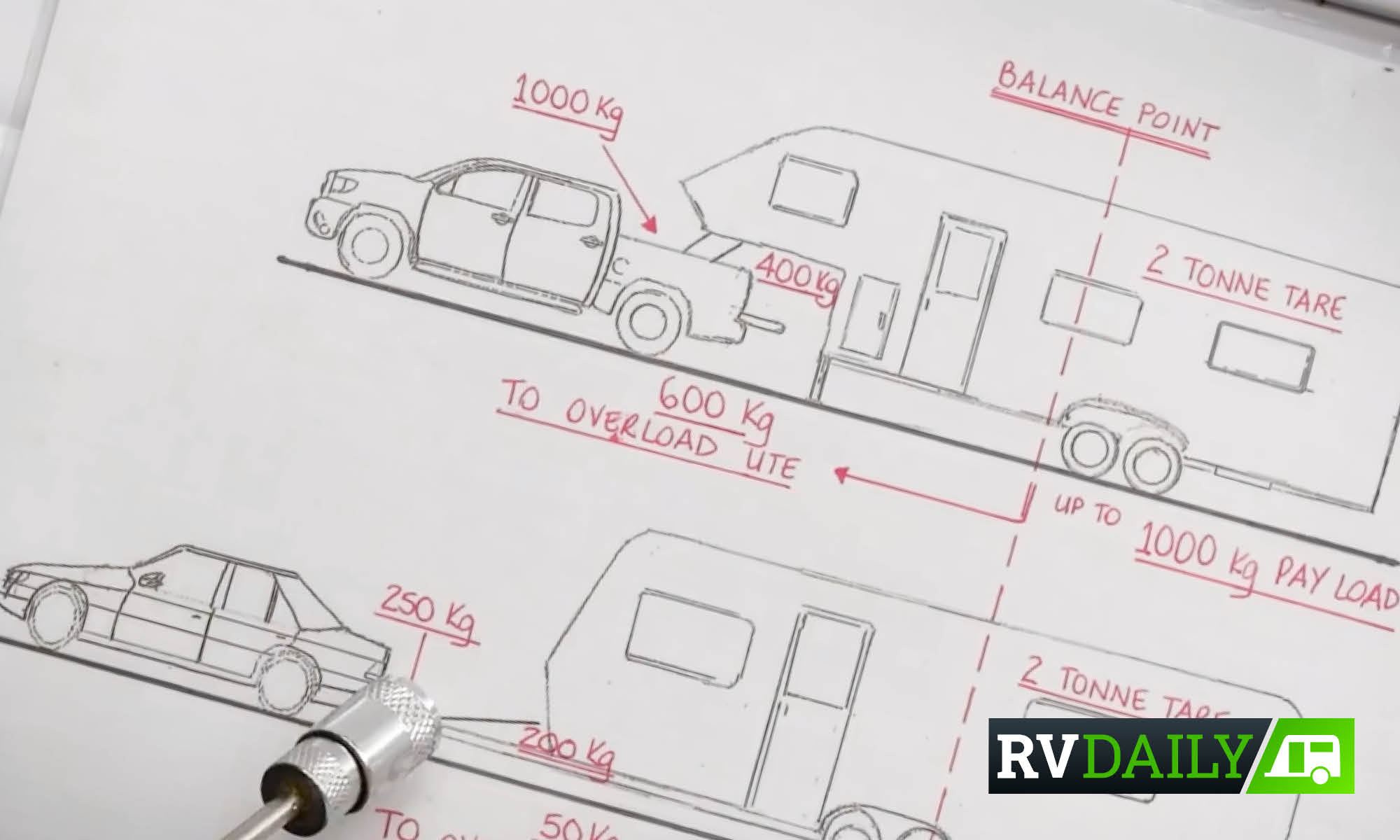 If you’re being sold something to tow, you wanna know if the person is selling you on fact or in fact pushing a barrow

Recently Caravan and Motorhome On Tour published a Facebook advertising video featuring Andrew from Winjana RV, a manufacturer of fifth-wheel caravans. The video is presented to us in a way that can be best described as authoritarian and dogmatic, asserting without evidence or explanation, information that to any industry expert is demonstrably false.

In the opening few statements of the video we are told “a caravan must have 10% of the [Tare]weight on its ball so this two-tonne van has 200kg on here [ball weight]”. Where is that legislated? No governing body or towing safety professional mandates this. It’s not a requirement to have exactly 10% of your caravan’s Tare weight as ball weight. It’s a recommended best practice based on the physical gross weight. As far as we’re concerned this is a misunderstanding of recommended practices by an aggressive salesman and it’s not the last half-truth we’ll be expected to believe.

It’s then asserted that all fifth wheelers “will offer 1000kg of payload vs 300-400kg of payload in the same vehicle [caravan]” as a universal generalisation and as with most generalisations it falls apart with even the smallest scrutiny. The limitation placed on the caravan or fifth wheeler for loading capacity from the manufacturer’s point of view are identical and no amount of dogmatism will change that.

The axle group rating is the most common limiter for trailers, regardless of their hitching mechanic. Many caravans at the 2000kg Tare are built with 2900kg axles, meaning the manufacturer would be limited to setting a GTM of 2900kg giving 900kg of loading. This is often done for many reasons, the most common being the lack of a need for more capacity. Heavier axles, springs, tyres, rims are exactly that, heavier. Moving up to 3500kg for example, may make the van 50-100kg heavier dry and you’d likely not be able to physically fit any more into it, meaning you’d simply have a heavier van for no reason. On top of this it’d mean that the springs weren’t being put under the required load to make them pliable, meaning an extremely rough ride for the trailer. If you’ve ever sat in the back of an unloaded trailer or ute you’ll know what this feels like.

We’re then told that in a caravan all the weight must be put around the axles and if you get it wrong you’ll get the “death wobbles”. Generally, whenever someone only deals in extremes and absolutes on the internet it’s likely that they’re going to be grossly misinformed. This scenario is a perfect example and if followed to the letter could easily put you in danger. Generally, you’ll load a caravan or a fifth wheeler based on where the storage space is located. Most caravans will have a front boot and may even have a front toolbox allowing for plenty of loading forward of the axles. If a caravan manufacturer believes that a design is prone to excessive ball weight they’ll likely add a limit to boot loading capacity; this is a symptom of a layout/design not of caravans in general. The truth is, every caravan is different and you should get into the habit of doing a weight check before any major trips. We’ve covered weights in our recent towing guide; the general advice for ball weight is to aim for 7-14% of your physical loaded weight, the ideal number will vary based on the design of your caravan. Generally higher in this range will have more pleasing results.

And there’s the zinger: Caravans are then said to be dynamically the same as dog trailers. Dog trailers have a set of steering wheels at the font and a set of solid axles at the back. To compare the two is simply nonsense. There’s nothing to necessarily argue here because of the ridiculousness of the claim, however, it’s a great opportunity to see the language we’re being fed. Dog trailer feels very negative and derogatory and that’s why the term is used, not because it’s remotely relevant to anything.

In the later sections of Winjana RV’s video we start to see our first inconsistencies between the information at the start and what we’re being told now. Early in the video (and even at the end) we’re told that there’s just no way a caravan can compete on loading.

With a fifth wheeler “we can tow the same 3500kg vehicle [fifth wheeler] with a $40,000 dual cab”. Most new dual cabs on the market are not only over $40k but they’re also rated at 3500kg tow capacity, giving them the same towing rating as that $80,000 Cruiser, thus making the argument invalid. Do you want a ute or wagon? Because you can tow the caravan with either. We’ve actually talked about towing 3500kg with modern utes and it’s not exceptionally practical; their GCM limits can be extremely low, often resulting in as little as a couple of hundred kilos of loading capacity left for the vehicle. GCM ratings apply to the vehicle universally, so it doesn’t matter if it’s a fifth wheeler or a caravan, you need to know this limit. (To read hat article, The 3500kg Towing Rip-off, see link at far right.)

This is a small, tight sleeping area that you physically must climb up into and out of. You can of course build this upper section as a storage area, but then it’s not living space and you’re comparing two different sized vehicles internally. This is something that Winjana RV demonstrates with their Cattai 760, which has an exterior length of 8m and an internal one of 7.6m, like many caravans of this size.

Now, none of this is to say a fifth wheeler isn’t viable or a great option. This is an issue of being armed with the correct knowledge to make an informed choice. Something that is lacking in the original video pitched at you, the buyer.