The hottest spots in western NSW for volcano hunters 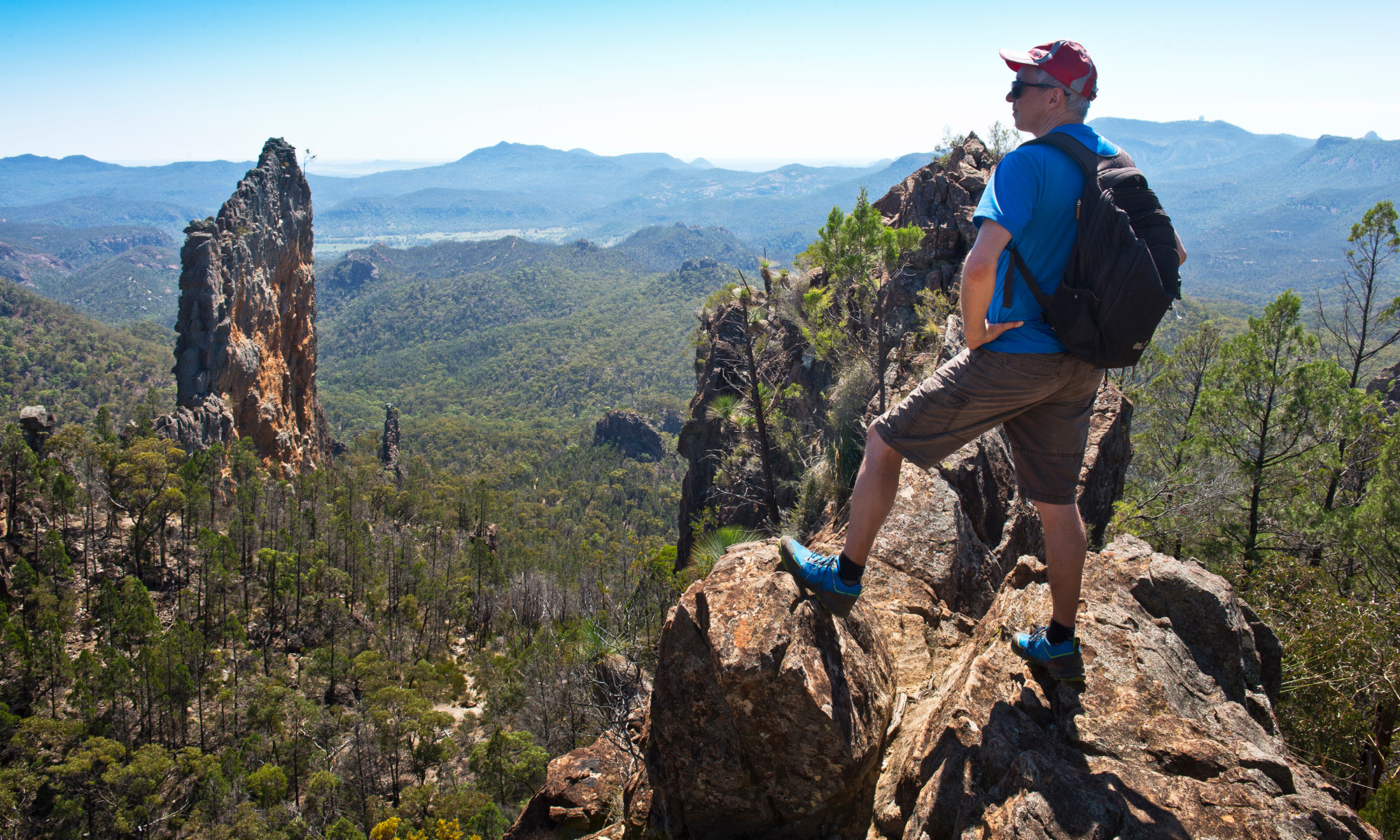 Once upon a time, these would have been frightening prospects but these days the volcanoes of western New South Wales are hotspots for different reasons. Check them out

May I begin with a confession? I’m a volcano tragic. I’ve visited volcanoes all over the world and stared into the boiling lava lake at Mount Marum on Ambrym, Vanuatu; looked down from the crater rim of Vesuvius over the heat-shimmering expanse of Naples; helicoptered into the still-steaming crater of Mount St. Helens not long after the 1980 eruption; inhaled a good dose of toxic gas on the rim of Tavurvur, a recently active volcano near Rabaul in Papua New Guinea. 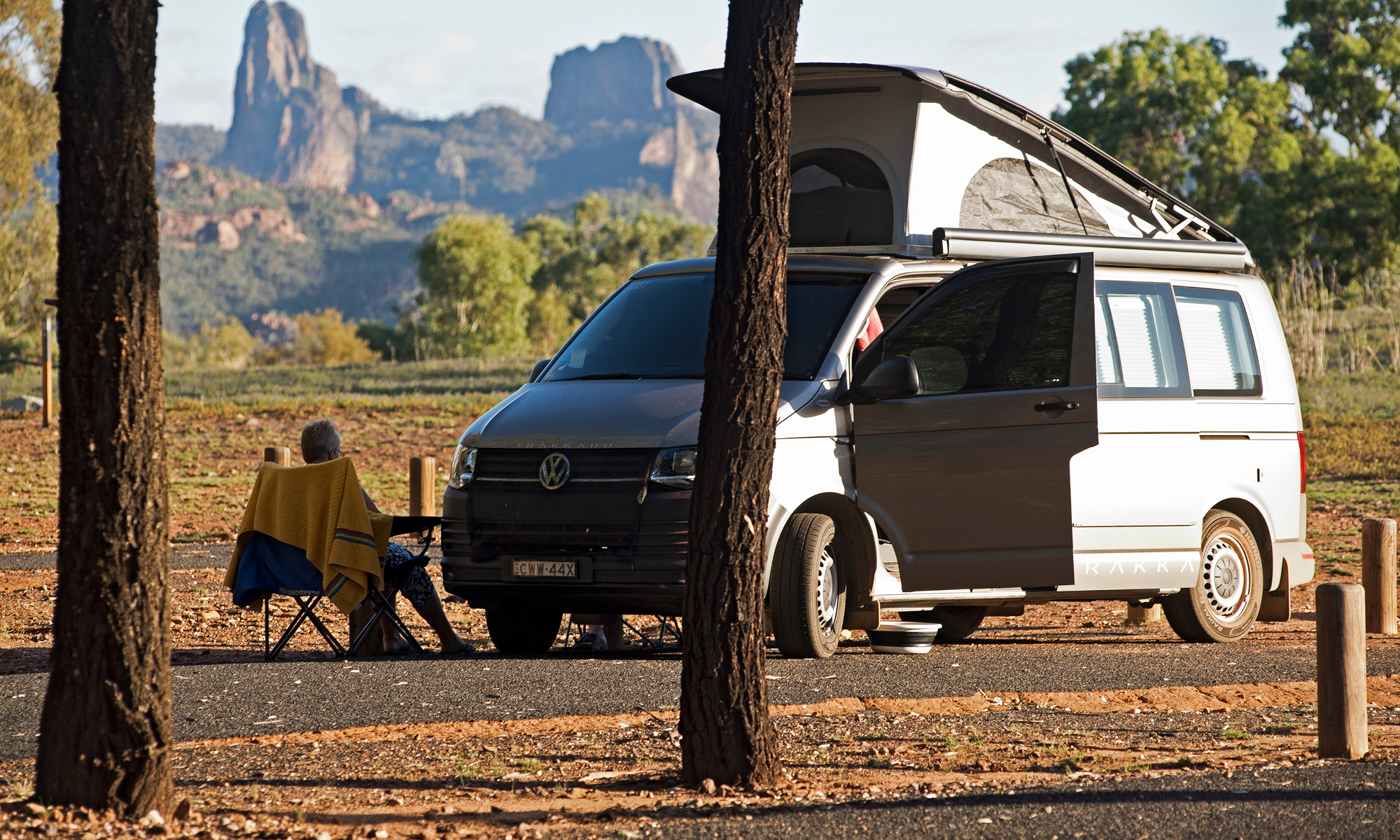 Well, you might think, this is all well and good, but Australia is not really known for its volcanoes, least of all active ones. True! Several kilometre high ash columns, explosive eruptions, deadly pyroclastic flows, glowing lava streams – these are not images you would associate with present-day Australia. But it happened. In the past. Australia, over its long history, experienced volcanism on an epic scale. From Victoria to New South Wales to Queensland, you can find the remnants of all this fiery destruction.

That’s why I’m cruising through the vast two-dimensional agricultural expanse of the Western Plains of New South Wales. Dubbo is behind me, the next fixture is the country town of Gilgandra, home of the Coo-ee Festival. And then, not far out of Gilgandra, the two-dimensional landscape is interrupted by a quite bizarre, hazy blue skyline of hills, bluffs and spires: the Warrumbungle Range rising in the distance like a mirage. It is an awesome picture, but best of all – at least for me – is the fact that this rugged skyline is the remnant of a massive shield volcano!

I base myself at Camp Blackman, within the Warrumbungle National Park. It’s an RV-friendly camp and some elaborate rigs are already set up among the gum trees. There is plenty of room in mid-March, as the busy season hasn’t started yet. In the distance, Belougery Spire, Crater Bluff and, if you look closely, the famous Breadknife,
are visible. They lie in the heart of this once gigantic volcano. 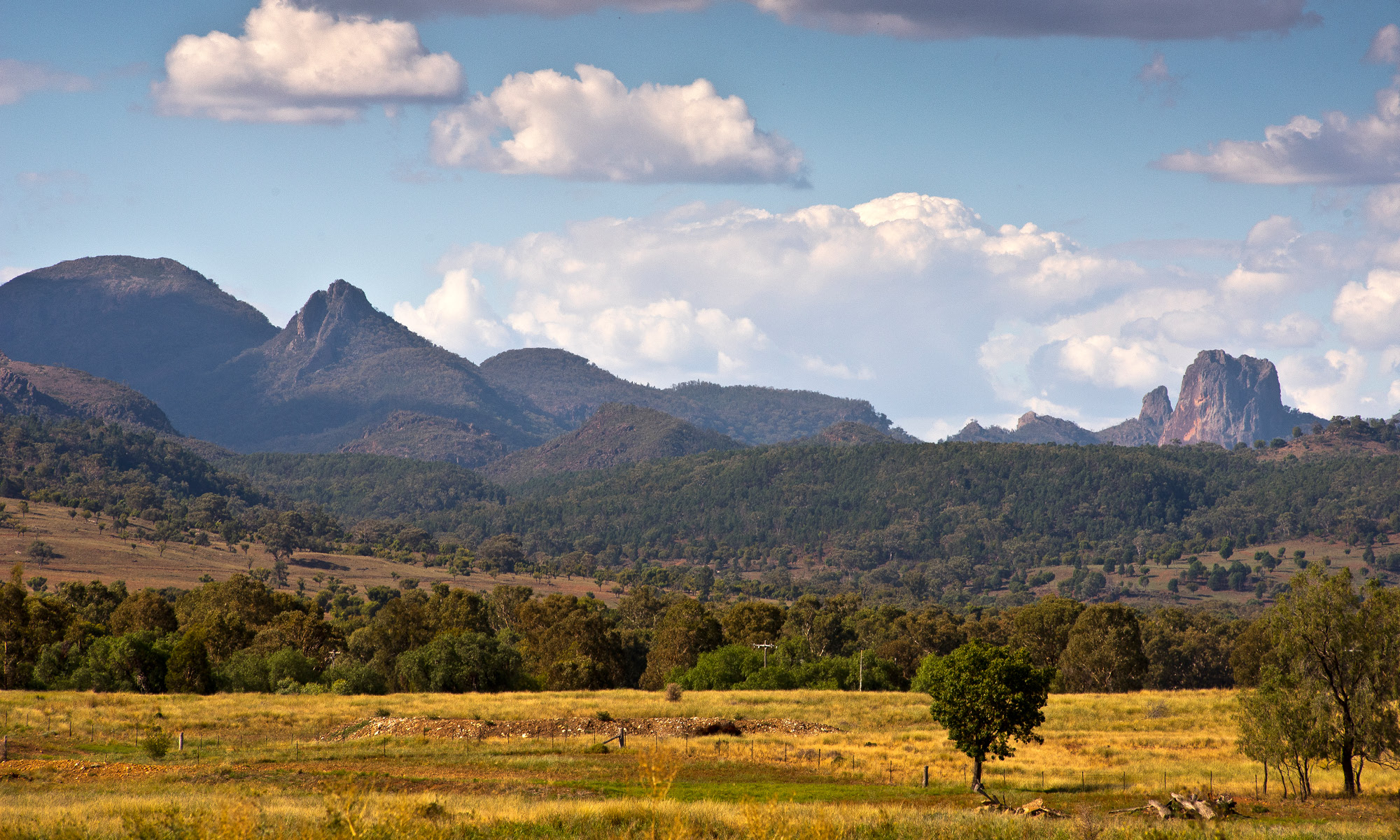 A walk to these rocky icons of the park, the Grand High Tops, is a must for me: it is a walk into the entrails of the volcano

A walk to these rocky icons of the park, the Grand High Tops, is a must for me: it is a walk into the entrails of the volcano. It is also hard work, especially in the heat. Along the way, there is plenty of time to think big and let your imagination run free.

17 million years ago, a timeframe as abstract as bookkeeping to me, violent events started to transform the existing gentle and undulating landscape. The Warrumbungle Volcano rumbled to life and a series of earthquakes signalled coming events. First, eruptions began to spew molten rock, building up craters. This relatively benign prelude went on for about a million years. Then the tune changed: massive eruptions turned the region into hell. Ash clouds billowing high into the sky, thrown up by explosions below. Viscous lava, like toothpaste, reaches the surface and forms short lava flows or solidifies into domes. Later the lava became more fluid, spreading out into the surrounding plains, forming layer after layer. After several million years of volcanic activity, a broad shield volcano, like a gigantic fried egg, was created, measuring 50 kilometres across and looming an estimated 1000 metres over the plains.

Close up, with a few kilometres’ distance and a few hundred vertical metres under my boots, the Grand High Tops are a volcano nerd’s wonderland: dykes, domes and plugs (there goes my alliteration!) galore. I’m in the belly of the beast. When the volcano was still active, there would have been layers and layers of volcanic rock above me – a strange thought when sitting on top of a lofty ridge. Enter the ravages of time: millions of cubic metres of rock ground to powder, washed away, crumbled, processed. Erosion is powerful. And revealing. Wind, rain and even ice did their bit to reduce the gigantic hump to the complex, fascinating landscape of today. It’s been 13 million years in the working. Now open for all to see are the inner workings of the Warrumbungle Volcano. 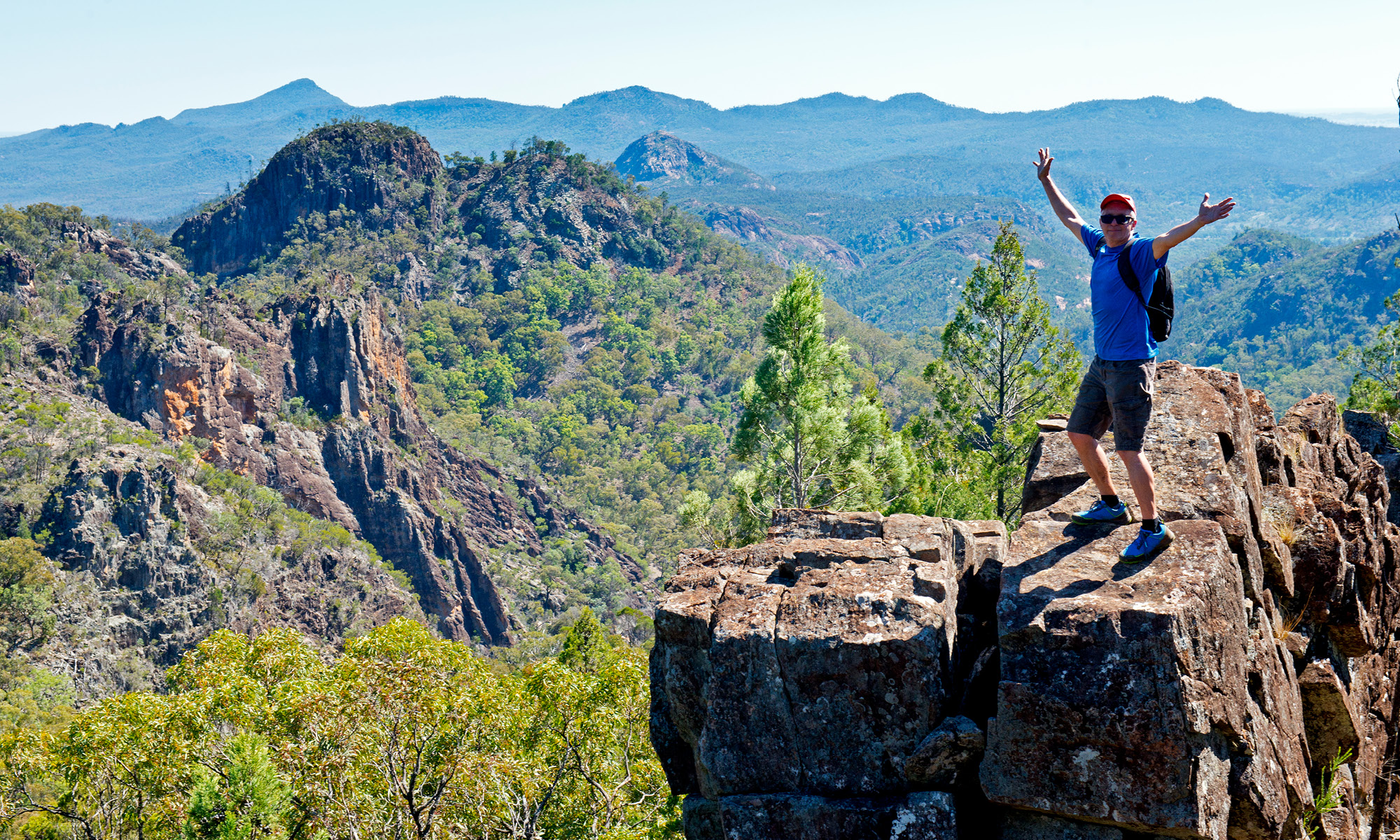 When the volcano was still active, there would have been layers and layers of volcanic rock above me

North-east of the Warrumbungles lies the Pilliga, the big forest. It is a landscape as it might have been, before the creation of the Warrumbungle Volcano: mostly flat or undulating. This enormous expanse of native forest, over 3000km² of semi-arid woodland, is the largest surviving of its kind in Australia. Nowadays protected as a national park and a nature reserve, the Pilliga Scrub is now safe from the chainsaws. The former logging town of Baradine, which prides itself as RV-friendly, declined with the logging industry. Its hopes are now on tourism, and the flash Pilliga Forest Discovery Centre is the first port of call there. A must-see in the forest, advises the friendly lady in the centre, are the Sculptures in the Scrub. An easy walk along the rim of Dandry Gorge connects various artistic creations. Nearby is a beautiful free campsite.

Travelling north-east through the Pilliga Forest is like travelling back in time. It is travelling towards an even older and bigger volcano than the Warrumbungle Volcano – Mount Kaputar. Mount Kaputar is what remains of the Nandewar Volcano. 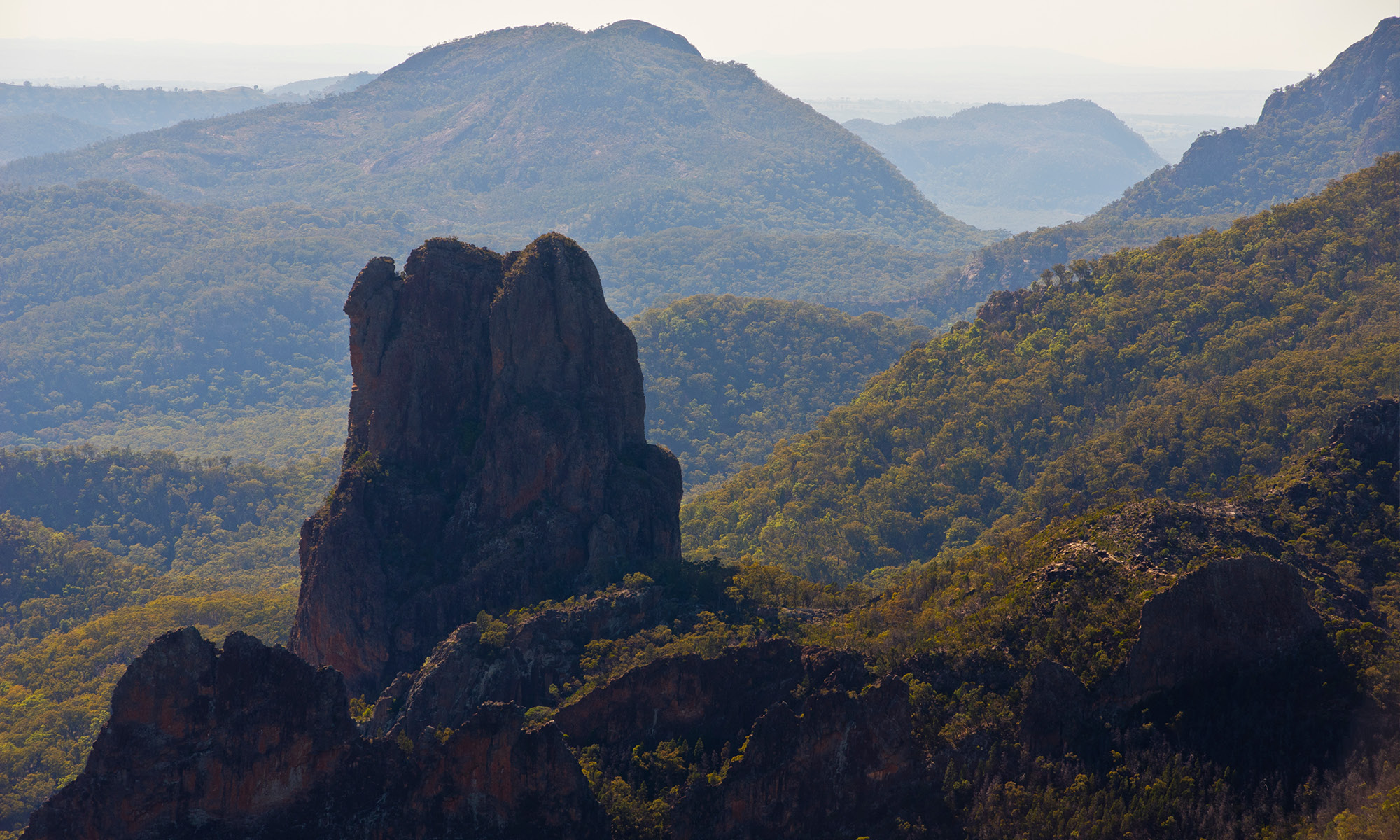 The breathtaking Belougery Spire; if you wish to climb it, there are both short and long routes that offer varying grades of difficulty

It is 39°C in Narrabri. At the end of the road, on the summit of Mount Kaputar an hour later, the temperature is a balmy 25°C. Deep below, the plains are obscured by heat haze. The drive, unfortunately not suitable for caravans, reminds me of excursions to the English hill stations in Sri Lanka or Malaysia. Below the summit, in a shallow valley shaded by mature trees, is one of the best national park campsites I have encountered in all my travels: ideal for hot summer days, with great amenities, an island of tranquility high up on the mountain. At an altitude of 1500 metres, the camp lies more the 1200 metres above the hot and dry plains. For people travelling with sturdy camper-trailers and confident to deal with oncoming traffic on a very narrow and, in sections, quite precarious mountain road, this is the place for you.

Mount Kaputar is very different to the Warrumbungles. The drama is missing. Although some features look similar, notably the prominent rock nipple of Ningadhun or the columned Euglah Rock, mostly the mountainous terrain is one of wooded ridges and valleys, of gentle peaks covered in forest. Age is a great leveller, and the Nandewar Volcano carries many more years on its back than the Warrumbungle Volcano. The origins of the volcano go back 21 million years, and erosion had a staggering 17 million years to alter what was once another colossal shield volcano. There are several walks in the park that bring you to volcanic features and are well worth the effort.

The most astonishing indication of Mount Kaputar’s volcanic past, however, doesn’t require a long trek through mountainous terrain. In the northern section of the park, accessible via a sealed road from Narrabri, are the spectacular Sawn Rocks. It’s a dramatic cliff face composed of five-sided basalt columns and the site is one of the best examples of this kind of volcanic feature
I have seen.

Maybe here, at this exquisite spot, you might ponder why these volcanoes are actually here. And why they are extinct. Enter the concept of a hot spot. These are high-lying magma chambers that, while the continent is drifting over it, every now and then burn through the earth’s crust like a blow torch and form volcanoes. These hot spots form a succession of volcanoes getting younger and younger the closer you come to the magma chamber. Australia has the longest chain of hot spot volcanoes in the world, starting in Victoria and ending at Cape Hillsborough in Queensland.
But that is another story. 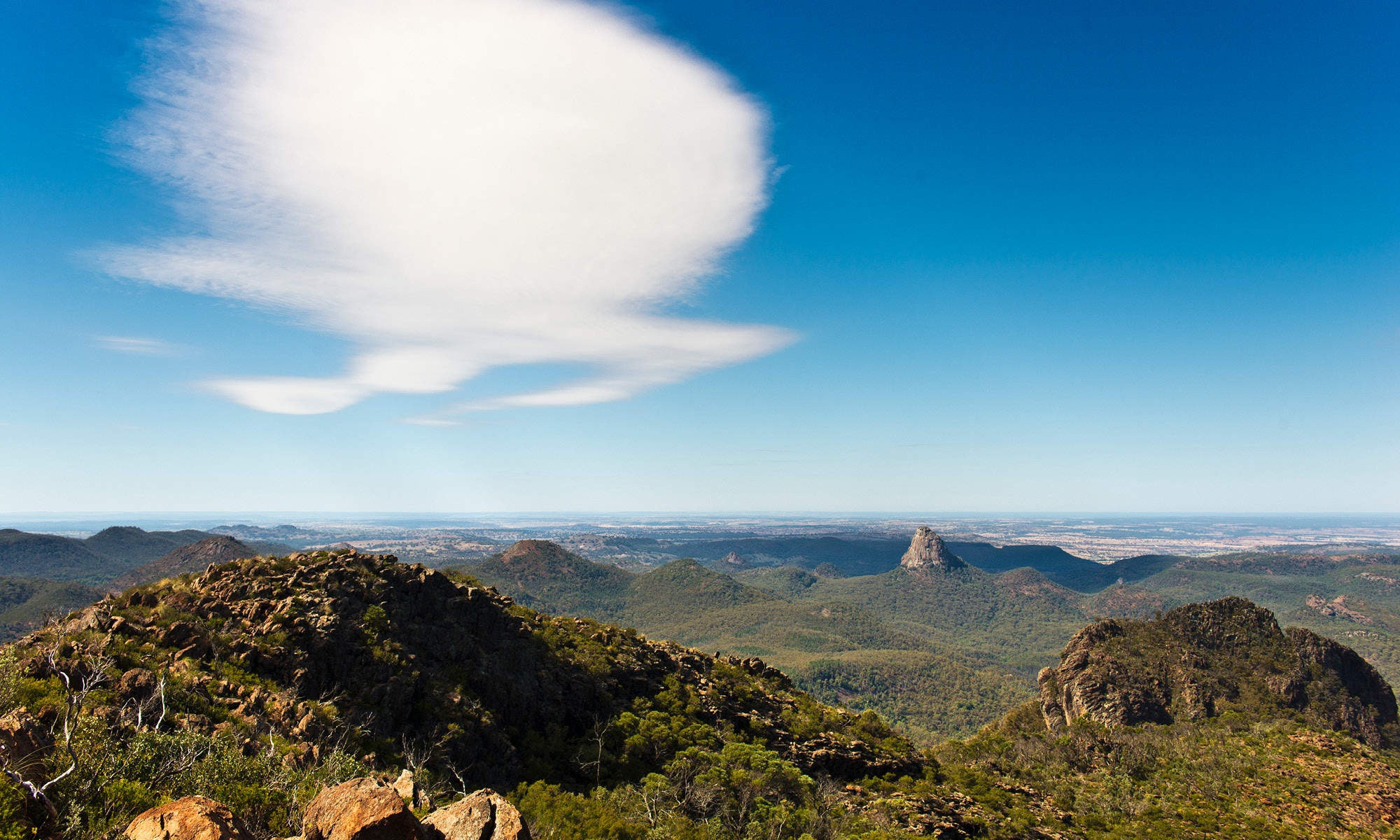 The view from Bluff Mountain

The volcanic national parks of Warrumbungle and Mount Kaputar lie on the edge of the vast Western Plains of NSW. The towns of Coonabarabran (Warrumbungles) and Narrabri (Mount Kaputar) offer all essential services with good shopping, caravan and camping facilities. Warrumbungle NP offers spots for rigs of all sizes at Camp Blackman within the park. The camping areas within Mount Kaputar, however, are not suitable for caravans. To explore Mount Kaputar, caravan parks near Narrabri, like the Highway Tourist Village & Caravan Park, can serve as a comfortable base to explore the park.

The road up to Siding Spring Observatory on the edge of Warrumbungle NP is also unsuitable for caravans. Near the turnoff to the observatory, however, is a large area to park.

Enthusiastic stargazers get their fix at the Milroy Observatory, just 10km from Coonabarabran on the Baradine Road. For bookings and further information, call 0428 288 244.

The Pilliga Forest Discovery Centre in Baradine should be the first port of call before exploring the vast Pilliga Forest. For wildflower enthusiasts, spring is peak time in the botanically extremely diverse Pilliga.

The best time to visit the volcanoes and tackle some of the walking tracks in the park is spring and autumn.