The Ballad of Mitchell Bert 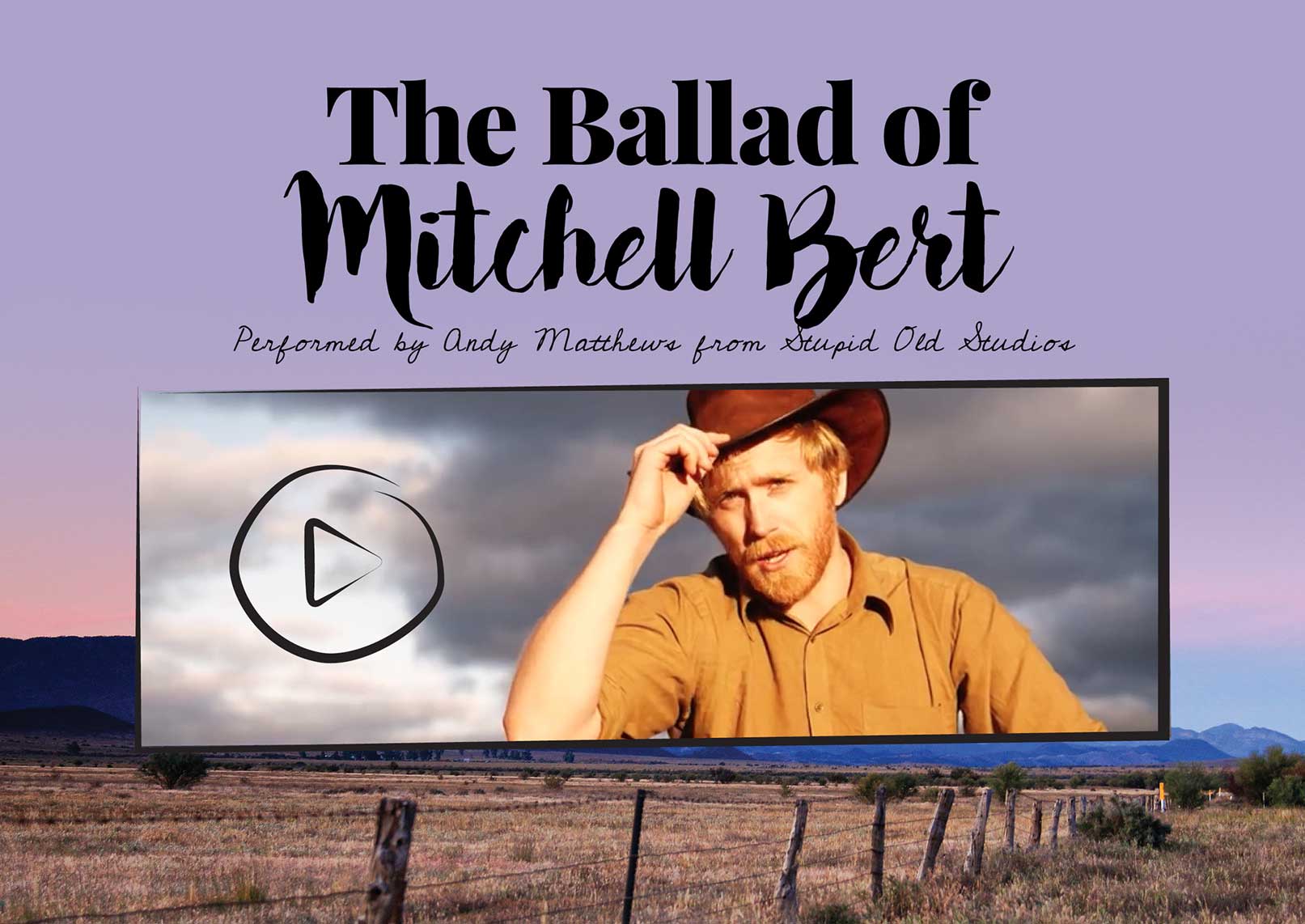 If you drive from Bourke to Charleville or you catch the monthly bus
Christ alone knows why you’d want to but there are those of us who must
And you peer out through the windscreen through the film of dust and dirt
Chances are you’d still not notice the parched farm of Mitchell Bert.

There are those who farm for boom times and who can’t survive the drought
And a few who push on longer while the money withers out
And there’s a couple who transcend the sun, the dust, the hurt
There’s a couple, and another bloke, and then there’s Mitchell Bert.

Few knew when he started farming and there’s fewer by the day
And when he really hit his straps is difficult to say
But as rain and profits dwindled, as kids aged and moved to town
Mitchell Bert he just got better, he just got that farm sh*t down.

And as he approached his eighties with time’s wind upon his back
And his bones became as liable as bull whips to hear crack
As you watched him work the fields alone and long into the night
You’d be forced to recognise you were watching someone get something right.

And as yet another heart astended as so many had before
The wide world finally beat its dusty up to Mitchell’s front door
Wasn’t fans or friends or family, they all left him well alone
But the national broadband network bringing fibre to the home.

Now Mitchell Bert was no computer geek as well you may expect
And he wasn’t someone with a great desire to ‘connect’
But he was also the last man on earth to let a resource lie there idle
‘Cause he knew that many idle farmers wound up, well, suicidal.

He drove half a day and back again and bought his first PC
Became the first man on earth to read a manual thoroughly
He plugged it in and switched it on and stood there on the shore
Of a sea of possibility like he’d never seen before.

Now if you fly to South Korea, and there’s reasons why you would
If you’re into electronics then you definitely should.
Then you might note with interest, it might give you pause for thought
That multi-player StarCraft is a national, televised sport.

Now StarCraft is a computer game as many of you know
Released in 1998 it has not ceased to grow
And for the folks in South Korea it’s an entire way of life
And the pros can earn a fortune playing StarCraft without strife.

Now Cyber had never lost a game, not ever, not once, not one
And he could make the game do things no one had ever done
He was quite simply the best the game has ever seen
Which was pretty good, considering, he was only just thirteen.

“His mind works differently,” others felt compelled to say
He sees the game as music, he can dance he doesn’t play
So come World Cyber Games ’13 it should come as no surprise
There was only one contender that was thought would take the prize.

The first few rounds unfolded there was little worth reporting
The seats played more or less to form, the conduct fairly sporting
The lesser players struggled and were quickly pushed aside
And Cyber took the entire thing completely in his stride.

But then come the round of 16 there was heated conversation
Which by the quarter finals turned to outright consternation
An unknown unseated player had put the others on alert
And his StarCraft player handle, it was simply MitchellBert.

Chatrooms went into overload and Twitter was aflame
Could this be someone from South Korea playing by a different name?
But it wasn’t they discovered, just an old bloke on a farm,
That he played the game at all was enough to cause alarm.

And there’s not a person living who can easily explain
How a farmer from the outback found his way into the game
Perhaps a breadcrumb trail of clicking led him deep into the woods
But how he got there barely matters, ‘cause the fact is he was good.

By the semis it was clear that this was something unforeseen
He wasn’t quick or smart or devious, far from it it would seem
Just a good man with deployment of quite limited resources
Who could marshal single-handed diverse military forces.

‘Cause Mitchell Bert had worked it out early on that first day
That StarCraft from rural farming was not a million miles away
A crop duster and a protoss corsair he could see the parallel
And a zergling was a wild dog as far as he could tell.

And that only left the question of where you spent your time
And that was something Mitchell Bert could figure out just fine.
So he scorched the semi-finals and that only left one more
And his name was CyberWarrior768124.

At last the fateful day arrived, the day that was to see
Just exactly how this run would end – in loss or victory.
Servers whirred, the game began, the web had held its breath
And forces they collided in a maelstrom of death.

Now Mitchell Bert was not too shabby and he gave it a fair crack
He was pretty good on defence and acceptable in attack
But Cyber was unstoppable; his play was off the scale
‘Til finally he made a move to end this fairy tale

He marshalled all his forces in the perfect pitza horde
And Mitchell’s base was over run, his men were to the sword
But then, it wasn’t possible, just when it seemed the game had ended
Well that base was just a decoy and Mitchell’s real forces descended.

And so they fought it out in a final blitz beyond compare
And all across the internet there was nought to do but stare
Until the final end was signalled with a single text alert
The game was over, finally, the winner: Mitchell Bert.

Before he switched his screen off (there was farming to be done)
He typed slowly in the chat window, a message one-on-one
Cyber, I couldn’t help but note and I’m not one to pry
But I’d say you’re a born farmer – one day, give it a try.

So if you drive from Bourke to Charleville or you catch the monthly bus
Christ alone knows why you’d want to but there are those of us who must
You’d do yourself a favour if you stop and knock the door
Of the youngest newest farmer, CyberWarrior768124.

Performed by Andy Matthews with Australia, Get It Up Ya
Old Stupid Studios