MURRAY-DARLING: WE LITERALLY GIVE TWO DUCKS ABOUT OUR FAMOUS WATERWAYS 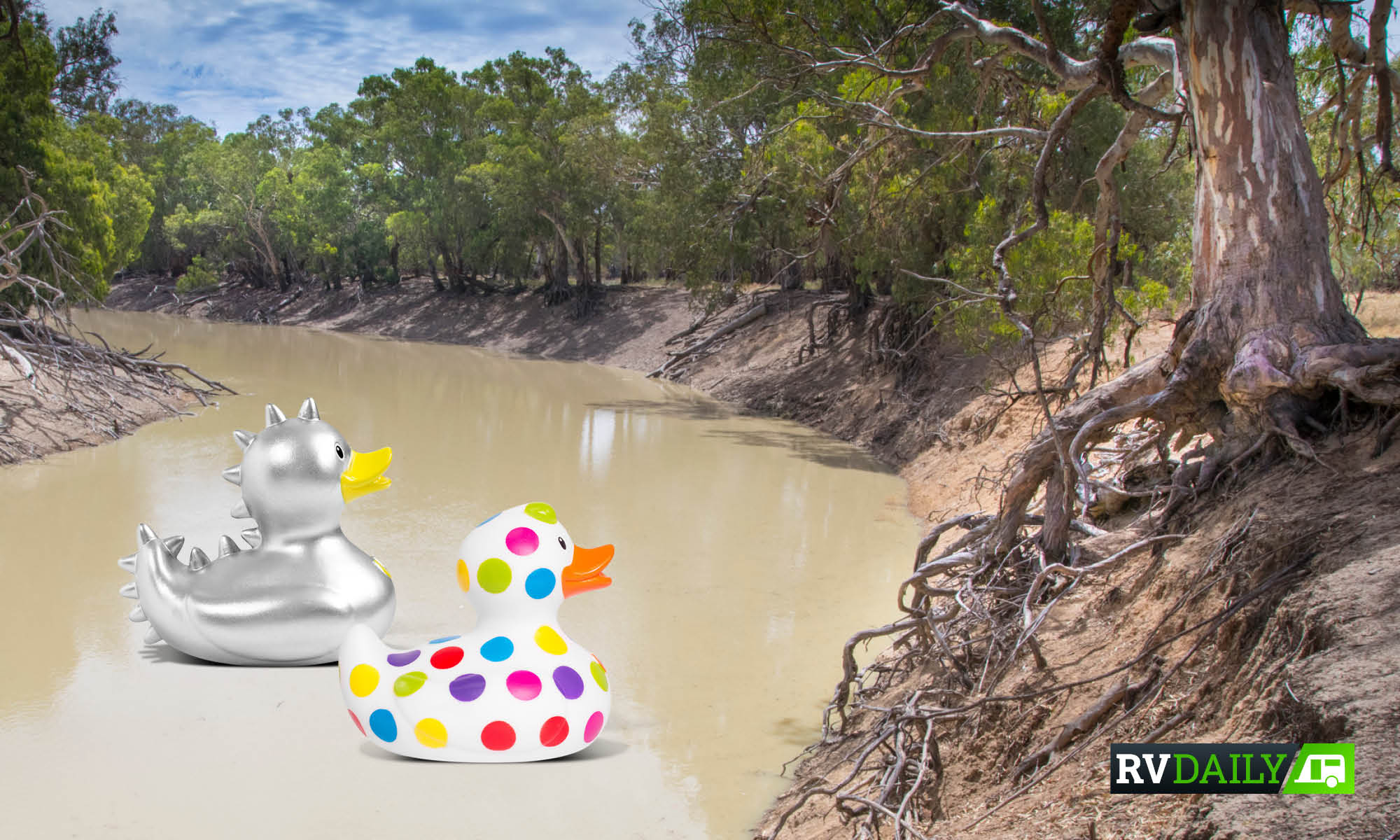 What did you think we meant?

Have you ever dropped a stick in a creek and wondered how long it would take to get to the ocean? Or whether it would get there at all? I decided to drop a couple of rubber ducks (the sort you’d find in a bathtub) into the headwaters of both the Murray and the Darling rivers and see what happened.

Once I realised that there were four major reservoirs, 14 locks and weirs, and several million snags, I knew that I couldn’t let the ducks travel on their own. This meant I had to accompany the two ducks, one on the Murray and one on the Darling for more than 3000km, and this was only to the junction of the two rivers at Wentworth, NSW.
I was in for a long road trip.

There are more than 50 tributaries that flow into the Darling so I chose my starting point in Condamine Gorge, which is a couple of hours south west of Brisbane. Covered in rainforest with most of the rain coming from summer storms, this was in stark contrast to the beginnings of the Murray in the alpine meadows of the Snowy Mountains.

The differences between these two rivers is marked. The Murray tends to flow fairly consistently, whereas the Darling has ceased to flow 45 times between 1885 and 1960. Both rivers have played a huge part in opening up the south eastern areas of Australia to European settlement. Before that, the Aboriginal people utilised the riches of the rivers for thousands of years. Shell middens and scar trees can be seen as evidence of this along the length of the rivers.

In the early years of the Europeans, the muddy waters of both rivers were plied by paddle steamers carrying supplies upstream to settlements and wool or wheat downstream to markets. Walgett was about as far upstream the steamers would venture on the Darling, although one did make it to Queensland border in 1893. Albury was the limit of navigation on the Murray. At its peak, there were around 6700km of navigable waterways in the Murray-Darling system.

By the 1920s, the railways had taken much of the trade away from the river boats. Today there are still paddle steamers to be seen operating as tourist boats in various towns along the Murray. The paddle boats are all but gone from the Darling, with a few wrecks reminding us of what was once the life blood of much of the inland.

While not used as transportation routes anymore, the waters of the Murray-Darling have been harnessed for irrigation. The first major irrigation systems began at Mildura and Renmark in 1887 after it was introduced by the Chaffey Brothers. It didn’t take long before the use of water for irrigation erupted into disputes and broken agreements that continues until the present day. Driving near Menindee, there are multiple signs and crosses highlighting some of the current disputes.

As a traveller, both rivers offer many options for enjoying and immersing yourself into the river culture. The towns of the Murray are generally prosperous with plenty of facilities for all types of accommodation and styles of travel. The Darling River towns seem to be in a state of decline and obviously not the bustling centres of trade they once were. Wilcannia stands out as a town with some wonderful 19th-century architecture that is now unoccupied and falling into disrepair.

More self-reliance and planning is necessary when travelling along the Darling as the distance between towns is larger and the roads often unsealed. The Murray seems to be busy with human activity, while the Darling probably has a higher ratio of wildlife to human. Roos, emus and stock are a more common sight along the Darling compared to irrigated crops along the Murray.

There are more bridges, dams and locks on the Murray. The Snowy Mountains Scheme feeds water into the Murray to supplement its flow. The Darling has much of its water extracted, before it can reach the Murray. The Murray rarely ceases to flow, although there are sections of the Darling that have ceased to flow for years due to natural extreme variations in flows from year to year.

In many ways, I personally enjoyed the travel along the Darling more than the Murray, as the Darling seemed more of an exploration of the landscape rather than a drive between towns and tourist destinations. There is no doubt that apart from the water to feed the agriculture, the Murray is enjoyed by the many who live near its banks. The Murray has a multitude of watercraft from the old paddle steamers to jet skis, wakeboard boats to kayaks and there are many family gatherings along the sandbanks.

The Murray-Darling river system is the fifth largest in the world and is also the world’s driest so it offers great variability as to what you will find as you journey its long path to the ocean. Only about 4% of the rainfall in the Murray-Darling Basin will actually arrive at the ocean.

DID THE DUCKS MAKE IT?

As to my original question as to how long it would take for a stick (or duck) dropped in the headwaters of either the Murray or Darling to get to the ocean? I still don’t know. If I had let the rubber ducks travel by themselves I would suggest the Darling River duck may never have made the ocean, either ending up stranded or sitting in a cotton field. The Murray River duck may have made it, if it wasn’t consumed by a huge Murray cod or jet ski intake.

If you are considering travelling either of these rivers for only part or the full length, there will be plenty to discover and enjoy. You may never want to head back home.