Is the Jurgens Lunagazer Australia’s Most Towable Van? 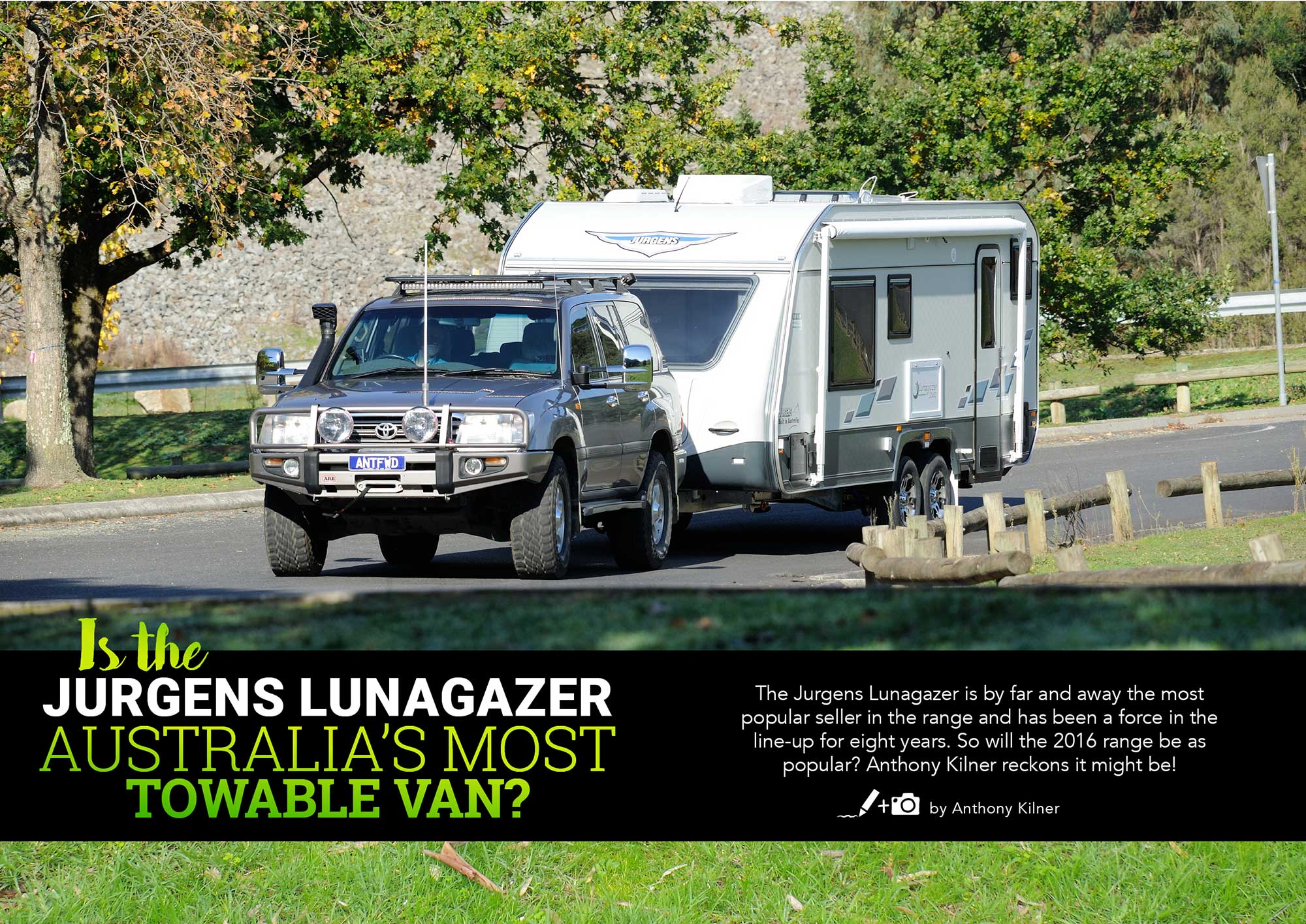 The Jurgens Lunagazer is by far and away the most popular seller in the range and has been a force in the line-up for eight years. So will the 2016 range be as popular?

Jurgens Caravans has been manufacturing caravans in Australia since 2008. The Jurgens name however has been around since 1952 in South Africa with a proud heritage in great touring vans that is still going strong today.

Jurgens’ Australian start was with a small range of on-road based vans manufactured in Tooradin, Victoria. These days, from a purpose built factory in Pakenham in Melbourne’s north east, Jurgens produce a large range of on and off-road vans and pop-tops in dual and single axle configuration.

All the Lunagazers feature an ensuite and a couple of options for the dinette with some incorporating it into an extra bed. There are a variety of interior options that can be fitted as well. Some of the options are leather trim, solar power, washing machine, picnic table and a full-sized oven to name just a few.

The 2016 vans have had a few small changes on the outside around the wheel arches and skirts to allow for a more dirt road capable look however it’s the inside that has been fully revamped for comfort and fun touring.

We reviewed the new 2016 J2403 series van and walked away pretty impressed. It towed like a dream on all sorts of roads from steep winding secondary roads to dirt and even on the highway it just sat behind the Cruiser with hardly a sway or a bang to say it was hitched up.

Chatting with Jurgen’s marketing guru, John Hughes, while on the road, he explained that towability is one thing Jurgens work hard at.

He went on to say, “The team at Jurgens have done a lot of testing to ensure the vans can be towed easily by all vehicles they are suited for. Owners of the Lunagazer have often commented that their vans just sit beautifully on-road.”

The access door to the J2403 is near the rear of the van. It’s a very practical layout, with the ensuite running across the back of the van and the club lounge dinette virtually opposite the door on the driver’s side. Access to the ensuite is a little tight for a bigger bloke like myself, however once inside there’s a cassette toilet, corner basin and a good sized shower. Space is at a premium here and Jurgens have incorporated as much cupboard and storage space possible with the room available. The club style dinette has been trimmed in the optional leather and a trifold table is used to maximise the space when the full dining table set up is not required. But why don’t you see for yourself and watch the video (look right!)…

A lightweight, fully engineered and galvanized chassis forms the backbone of the Lunagazer. ALKO independent rubber suspension with shockers supply a smooth ride while 10in electric brakes handle the stopping. Alloy rims shod with 14in rubber keep the van rolling smoothly while ALKO ESC keeps the van under control.

Jurgens use a one-piece floor and roof with the construction of the body along with composite walls with aluminium outer for durability. Moulded fibreglass panels are used on the front and back to create the neat body styling.

Double-glazed windows provide plenty of light and ventilation in the sides and the front of the van and a hatch through the roof as well. The windows all have screens fitted and curtains are used on the front window.

Under the chassis are two 60-litre water tanks, drop down stabilising legs and the spare wheel. I am not a fan of having the spare under the van as I reckon some people will have trouble accessing it if they have a flat tyre to change.

Around the body is an awning, picnic table, a small full-width boot for long items and a front boot that houses twin 4.5kg gas bottles. This front boot space has a 30kg limit which is something to be aware of when packing. Up on the roof are the reverse cycle air-con unit and TV aerial.

To access the BBQ gas fitting, the bottom mount for the awning arm at the front of the van needs to be removed if the awning is not folded out. This is not a hard thing to do and really I can’t see where else the boys could put it, however it is something to note.

LED lighting is used around the outside and inside of the van which just adds to the package.

I spent quite some time hauling the Lunagazer on dirt roads, narrow twisting roads and highways and the towability impressed me no end. Yes, the interior is practical and flashy and the body and chassis are solid, however the towability did it for me!