Is this the caravan innovation of the decade? We demo the Aussie hybrid-drive system that’s set to take off!

RV Daily joined the OzX team to take their small prototype caravan (they call it ‘the Esky’) off-road for the very first time. In some areas performance was admittedly underwhelming, and yet the tech behind it driving the system, so-to-speak, is phenomenal.

The basics of the hybrid-drive system is electric driving wheels supported by a large battery, with power delivered via a seriously cool inverter and some very, and I mean very, complicated and clever electronics and computing system – SkyNet, here we come. 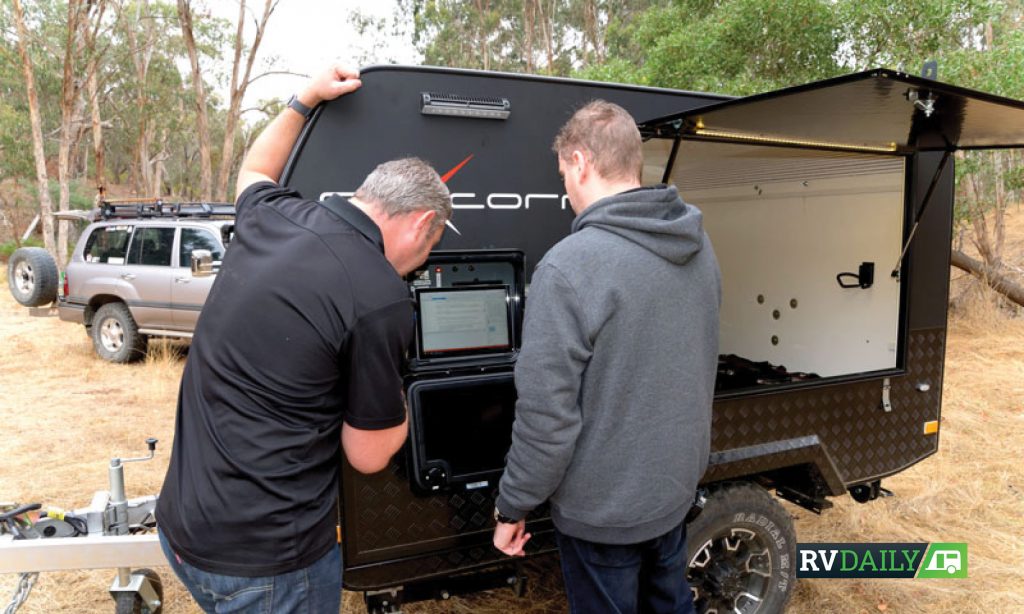 Andrew Huett and Powertrain and Safety Engineer, Lachlan Grogan, check out the operational tech via a laptop

At the heart of the system is a 16kWh lithium pack. This is OzX’s design work and while there is lots of tech around the stability and safety, including temperature monitoring, that we can’t currently discuss, it’s the same tech and battery that RV Daily is following with the fully electric van testing built around a Retreat caravan.

While the battery is the heart of the system, the rest of the tech is the super-brain that controls all the safety systems, directing power from one point to another by communicating with the myriad sensors and data collectors in real-time. The inverter can run up to four 3-phase electrical motors with a peak of 20kW per motor in precise real-time control.

The grunt behind the hybrid drive comes from air-cooled 16kW nominal motors producing 508Nm of torque. These are prototype motors being tested for semi-off-road use; OzX also have fully off-road units in the works. There’s so much we can’t talk about just yet, but OzX has it covered for all styles of caravanning. Of course, this system requires charging which can be done in several ways, including via 100/240V power from the grid or a generator. The best part about this system though, is that the charging is all fully integrated. It includes a nominal 1600W of solar panels, which can be added to depending on the size of the van roof. The system can recharge itself by regenerating power from the wheels when they are in overrun, such as when going downhill; and if that’s not enough, the system is so smart it can enter a forced re-gen mode, which drives power to the battery while braking or accelerating.

There are some other electrical components that are currently being tested on the fully electric van in conjunction with this amazing hybrid drive. These include a 5kW 240V inverter that can power up the caravan’s domestic appliances or even another van, and with a little extra engineering work, it could even power a house during a blackout. Imagine parking your van next to your home and, within limits, running your home from your van! It certainly has some amazing potential.

On the trip through Tallarook State Forest, we were running with a smaller battery system, as the main battery had been sent out on the electric Retreat caravan travelling around the country. The controls for the Esky were operated manually via a laptop, which meant things were a little clunky, however, that system will change in the next generation – this is just version 1.1. 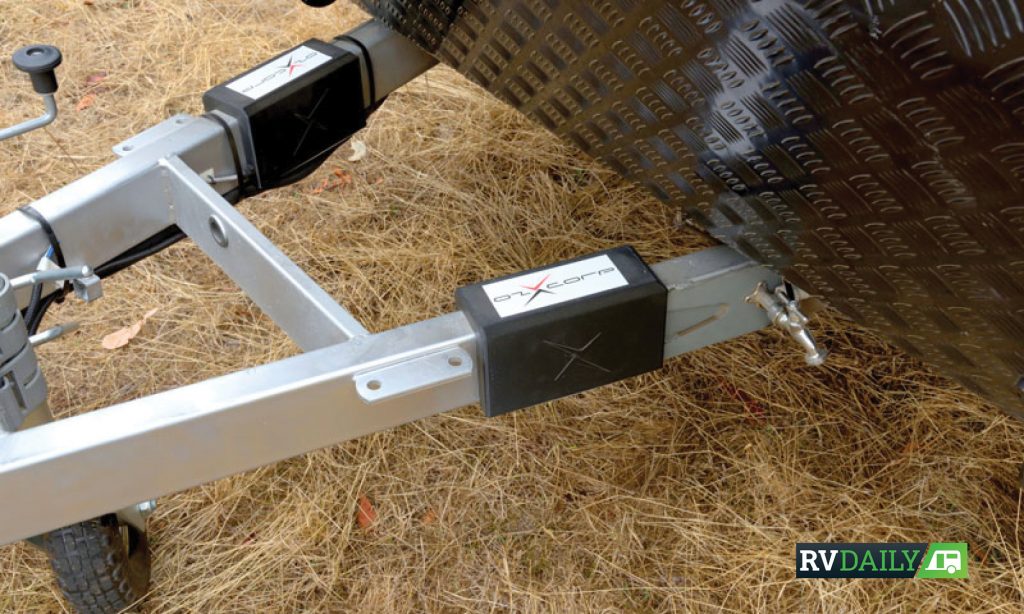 What we found was that the drive system worked well moving the van around, but the aggressive mud tyres bit in rather too well, making it hard to control. This is because the system was operating in a speed control setting. For safety and as part of the next generation of controller, the driving wheels will operate off a torque-based system. This will provide a far smoother driving operation.

We tried to emulate the driveability of the system on hills, rock and gravel roads and found that the torque, when it came in, gave the mud tyres plenty of grip and we just drove on through.

The main aim of having the van wheels powered, whether on a single axle or a dual axle, is to negate the weight of the van or camper being towed. Imagine towing a two-tonne van (that’s what the motors are rated at currently) and taking off from the lights up a steep hill. A conventional caravan is a dead load, working the tow vehicle to the max just to get enough grunt to move the vehicle and van. In contrast, with this system driving itself, getting off the mark and up the hill is much easier! 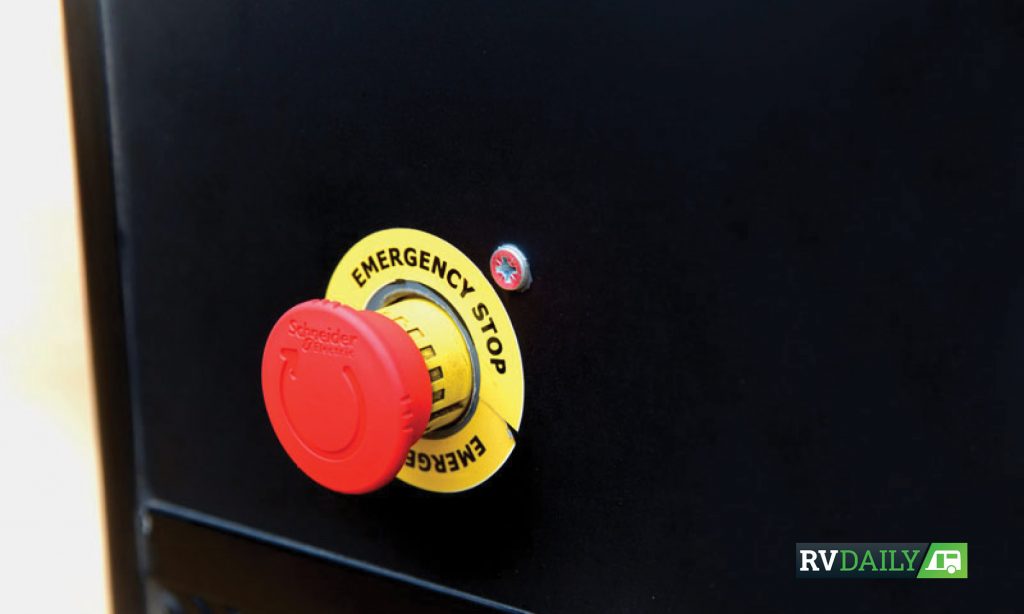 There are three safety systems utilised in the Esky. A manual one as shown, and a computer-based one via remote control

OzX’s plans for the future includes software that will control a diff-lock system on single or dual axles – yes, that means up to eight-wheel drive! It will offer Torque Control for hill climbs and rocky terrain. There will be Sand Assist Mode, advanced ESC in real-time via a Torque Vectoring System and, in effect, an ABS mode that will help with controlled braking.

Another exciting feature is Park Mode, where the van can be unhooked and, via a phone or tablet, can be parked and/or manoeuvred where it needs to go without the tow vehicle.

Another thing that really blew me away was how the sensors around the van all talk to each other in real-time. Eventually the system will be road adaptive, meaning it will learn the roads and surfaces it travels on. It will be predictive in how it could use this information to warn the driver that there is a road safety warning. Along with all the other safety systems being worked on, this could really save lives.

Stay tuned as this system WILL revolutionise caravan and camper travel into the future, and potentially other transport systems too. The mind boggles at the possibilities! 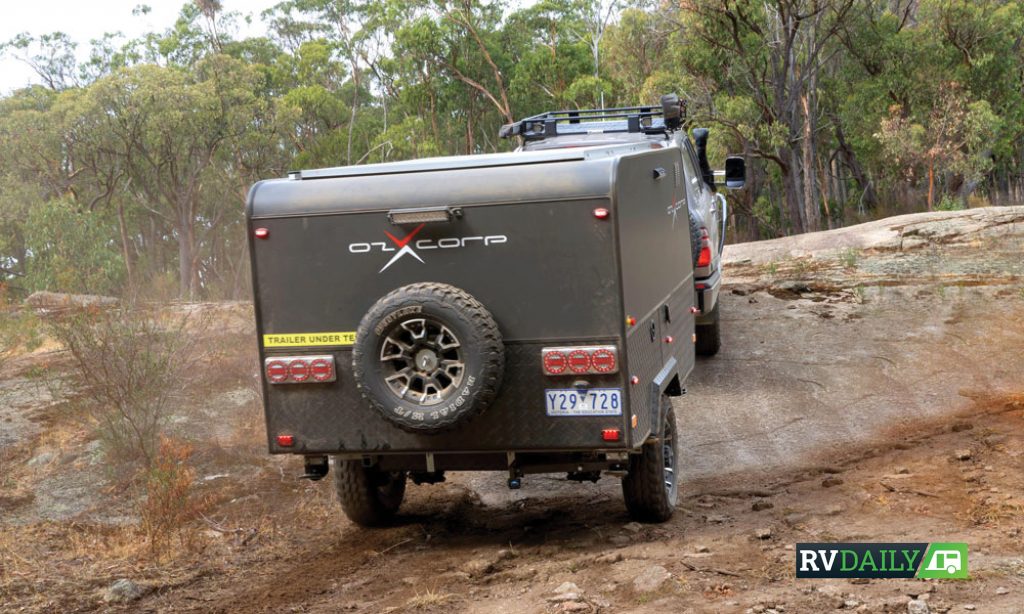