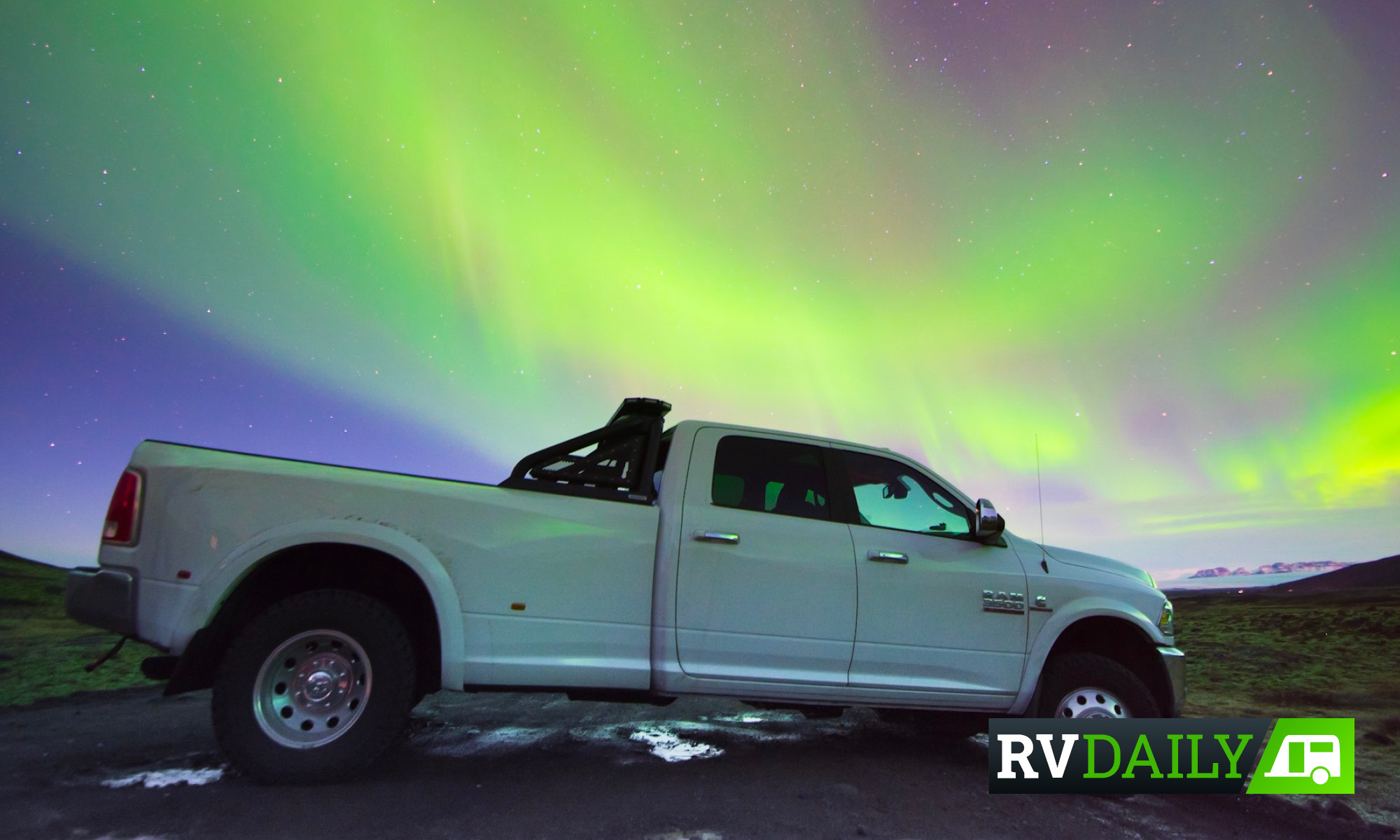 It’s a place we’ve all heard about – maybe even longed for, but it’s a slog to get there and an even bigger task to tour around in an RV. It’s worth it

The wind is blowing a gale as we round each bend, the narrow road snaking around snow-capped mountains right where they meet the sea. You need complete concentration to keep the vehicle on the right side of the road, but not too far over, as there’s no guard rail to prevent the 100 or so metre drop into the icy ocean.

It’s 10am in November and the temperature won’t get much over one degree. The roads remain icy until bathed in the limited warmth of the sun and quickly become diabolical again as the sun sets. Travelling before sunrise is a prerequisite to make it anywhere in the six hours of daylight at this time of year.

But hey, don’t let any of that scare you off…

From the moment we started to descend into Reykjavik Airport as dark snow-clouds loomed overhead, we knew it was going to be an adventure.

The transfer bus had us to Reykjavik just as the snow started to gently fall and the anticipation of getting on our way grew. Our first night’s accommodation was in the capital. After dropping off our bags we hastily ran out the door to check out the very chic main street before it got too dark. Designer stores lined the streets; more reindeer rugs than you could poke an antler at.

The next morning, we had to pick up our campervan a little way out of town and make it to our morning tour with Arctic Trucks. Arriving at the KuKu Campers office, our Land Rover Defender – hereafter known as ‘The Landy’ – was warming up, ready for what was to be a nearly 3000km journey over the next seven days. I signed some forms, grabbed last-minute camping supplies (KuKu Campers stocks everything you need) and we were on our way to Arctic Truck HQ – but you’ll have to check out Unsealed 4X4 issue 49 (see link on right)to hear more about that one.

We underestimated the brevity of the days, which left us a little short of the planned destination, so we rolled into the campground in the little town of Hella (Het-la) and retired to our camper to escape the cold. Shortly after, we heard a flurry of activity outside: the Northern Lights had made their first appearance for the trip. A little weak this night, but exciting nonetheless.

The next morning we woke to pouring rain.
It doesn’t take long to learn that you can’t get too caught up in what the weather is doing here; it’s likely that around the next bend, the sun is shining and the birds are chirping.

We backtracked our way to Gullfoss Falls, one of the most powerful in Iceland. Its stepped falls appear to vanish into the earth, but a peak over the icy cliff edge reveals a river way down below.

Once satisfied, we took to the road again, pushing through more heavy rain along the ‘tourist section’ of the ring road, where large coaches shuttled visitors to all the hot spots.

The weather cleared as we landed at Seljalandsfoss, a giant waterfall coming seemingly from nowhere. A path snakes its way to the waterfall, and after some rock scrambling, an amazing sight emerges. The afternoon continued in a flurry of waterfalls along the tourist road, each one more epic than the last; in the ‘summer’, lush and green, in the colder months, frozen and majestic.

We landed late in Skaftafell, sitting at the base of the Vatnajokull National Park, the biggest glacier in Europe and the epicentre for most of the guided tours. We set up in a rest area and paid a visit to the local truck stop for crumbed lamb chops – apparently the Icelandic like them too!

And then she appeared … she wasn’t there long, but she put on one hell of a show. It’s hard to describe, and often appears nothing like the photos, but tonight she did. She danced mesmerisingly across the sky for about half an hour. On this night, the Northern Lights were all they were cracked up to be. If we saw nothing else this trip, it wouldn’t matter.

After a quick briefing from the tour guide as the sun began to peek over the mountains, we hiked a short distance to the ice cave as the guide shared his wisdom. We were left to explore for a bit as the sun lit up the cave’s glass-like walls.

Getting back into The Landy, we wound our way further along the southern road with the weather looking perfect. Arriving in the coastal town of Hofn we sought out the campground, which was partially closed this time of the year. The facilities were great and the campground overlooked the water and snow-capped mountains. It was tempting to stay the night, but after cracking out the map we decided to press a little further. A bad idea, in hindsight.

We checked the road conditions and they seemed fine – nothing The Landy couldn’t handle. It was approaching dark and the sun had set; the plan was to get a little further and stay in a rest area along the road. The problem was, the road wound its way along the cliff edge as it climbed into quite a mountainous area of the south-eastern coast. Made worse by oncoming trucks on the very narrow road (they can only travel at night), it was a hair-raising drive made more difficult by the increasing wind, which blew the Landy around quite a bit. Enough was enough, so we found the next rest stop and had the worst sleep of the trip. The car rocked backwards and forwards all night and the wind howled. I had my doubts that we would still be there in the morning.

We made a move before the sun rose, winding our way along the coastline. The wind continued but wasn’t as strong, while the ice and snow on the road became more prevalent. But by god, the views were amazing as the sun started to light up the landscape.

The going became slower and slower, the road conditions worse and worse – not even the spiked tyres were helping. We were among the most remote parts of Iceland; there were no towns and all of the tourist traffic was long gone, left behind at the last waterfall. There was a decision to make. We had a flight to catch at the end of the week, and the weather forecast was suggesting snowfall and more wind the further north we went. We had been warned about getting snowed in when the weather can turn suddenly. We (I) had to admit defeat, so we turned back. Our plan now was to attack Iceland from the other direction and see how far we could get.

We continued back east, taking a diversion further south on a coastal road. After a run of great weather, the road soon became snowy but the sun was lighting the landscape magnificently. What an amazing drive. We crossed the ocean inlet for a quick photo stop, where we spotted a couple of seals out catching breakfast. Next stop was the (very) small town of Suðurstrandarvegur (yeah, I have no idea either).

The Landy needed a quick pit stop back at KuKu Campers HQ for some Land Rover-esque TLC, after which we headed north – our aim was to get to the second biggest city in Iceland, Aukery, on the very north coast, but that was two days away.

Where were we going to stay tonight? Well we hadn’t quite planned that bit yet. But there was a certain mountain, from a certain popular TV show, that had to be seen on the way. We diverted off the ring road and headed towards Kirkjufell. The road maintenance was non-existent and the snow was thick on the ground.

We eventually stumbled on a lonesome guest house/campground. However, we were informed that we wouldn’t be camping tonight. They had beer on tap and hot showers, so I didn’t complain. Managing to catch sunrise at the Game of Thrones mountain (Kirkjufell) without too much fuss, we arrived just in time for the sun to be completely blocked out by clouds. The results were stunning, nonetheless.

The next part of the drive can only be described as treacherous. To make it to Akureyri we had to cover a mix of back roads and dirt tracks. Most of these roads followed the coastline and wound around cliff edges and, of course, in the usual icy conditions with no guard rails. We pulled into Akureyri before dark, but as was becoming the theme, the campground was closed for winter, so a rest area on the way out of town it was. But not before indulging at the local outdoor swimming pool; the pools in Iceland are very popular and very well heated!

Our final day was spent relaxing at the Blue Lagoon, the amazing geothermal spa and one of Iceland’s most popular attractions. What a way to end such an amazing trip.

The Icelandic landscape is like something from another planet. Tackling the island in winter certainly isn’t for the faint-hearted – plans fall apart, the weather changes without notice, and the driving can only be described as an adrenaline rush. But if you give it a go, you are certainly rewarded. I can’t wait to come back in summer to see even more.
We even nearly fell in love with a Land Rover!