It’s a common complaint: The water pressure in my caravan is terrible. What can I do about it? Well, I did a little investigating, and this is what I found. In our Five-Minute Mods – we show you how to restore your caravan’s water pressure

The water pressure coming from your caravan park water supply is usually around 500kpa, which is much the same as the domestic pressure found at most Australian homes. The problem is that pressure can vary around the country. I’ve heard of mains water pressures of 1000kpa. That amount of pressure can have a disastrous effect on your caravan’s water fittings.

Even regular pressures can cause problems. For example, the maximum pressure of most RV hot water systems is limited to 450kpa. Provide water to it of 500kpa and the system’s pressure relief valve will likely leak continuously. You won’t be very popular with the caravan park manager if that happens.

To counter this, virtually all caravans and motorhomes are fitted with a pressure limiting one-way valve. They are usually rated at a conservative 350kpa, except they are notoriously problematic. Fortunately, they are fairly easy to replace, but at around $70 each, it is an expense I would rather avoid.

We are on our third one in our caravan, and it recently started playing up with the usual drop in water pressure. I’d had enough, and I wanted to see if I could repair it myself. I had read numerous times that they can be taken apart and serviced. I had the old one from the last replacement, so I figured I had nothing to lose if I gave it a go. What I found is that most of the advice proffered on the internet isn’t helpful and that the fix is straightforward.

To disassemble them, you have to unwind the two halves apart to expose the inner components. They are a bastard to get apart. You really need a vice to hold them so you can apply sufficient force to loosen them, but I was able to achieve the same effect with a large pair of vice grips.

Inside the valve is a spring-loaded piston (for want of a better word). As the water comes in the valve, it pushes the piston against the spring and it acts as a dampener, reducing the pressure. I’d been told the constant pressure from the water supply compresses the spring and reduces the resulting pressure over time. The solution given is to stretch the spring to restore it to its original length.

What I found was these springs are really strong. I can’t see how they can be compressed so far as to lose sufficient stretch to affect their performance. What I did find out was the piston was difficult to pull out. It was physically stuck in the barrel and reducing the flow. I needed to use a pair of pointed-nose plyers to remove it.

The piston was contaminated with dirt and muck. Not a lot, but enough to prevent it from moving freely inside the barrel. I gave the whole assembly a wash in white vinegar and smeared the barrel and the piston with some Vaseline. This made the movement of the piston much smoother. I put the valve back together again with fresh plumbers’ tape around the connections, refitted it to the van and tested the pressure.

The result was nothing short of amazing. The difference in water pressure was incredible. For the sake of it, I took apart the other valve I had to see if it had the same issue. This one had a slightly different design but worked in much the same way.

Curiously, it had a small hole in the barrel. I have no idea what purpose it serves, but I did notice some red dust inside the valve. Given all the dirt roads we’ve driven on lately, I’d put money on it the dust came in through the small hole and jammed up the piston.

After discussing this with a few fellow caravanners, I’ve since learned that it may have been better to use proper plumbers’ grease in the valve rather than Vaseline as it could cause the rubber seals to deteriorate over time. Others have said they have been using Vaseline for years and not experienced any issues. I guess Vaseline will suffice if you have nothing else. I have no idea how long this fix will last. I imagine at some point the Vaseline will wash away and the piston will jam up again. If it does, it’s not a problem given the simplicity of performing what amounts to a simple maintenance procedure.

If you’re experiencing problems in your RV, this five-minute mod should solve your caravan’s water pressure issues once and for all. 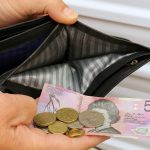 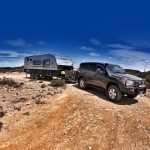