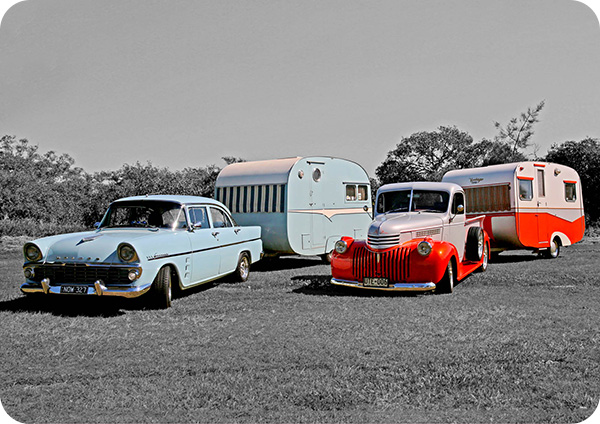 By Tim Scott and Sam Rees-Jones

It was a flash of colour and twin V8 rumble that alerted us to these two brilliant combinations passing by while in northern New South Wales. Frank and Helen Ferguson, in the blue 1960 Holden, and Geoff and Della Sheard, in the 1946 Chevy ute were on their way to the type of gathering of hot rods and vintage vans that forms a large part of their lives.

Those are the first two essential components with rock and roll music and dancing being the others. Following an exchange of details the photo shoot was booked and we’d fly back up to have a closer look at these vehicles that turn heads everywhere. They’re the kind of rolling roadshow that cannot fail to raise a smile in those old enough to recall them first time round, and those young enough to appreciate cool when they see (and hear) it and those in between who have never let go. Our foursome here falls into the latter category.

In fairly rough condition when Frank bought it a decade ago (one of two for $1500) the blue caravan is a 1954 kit van that was originally supplied in many forms and made from the precursor to ply, known as bondwood. The whole structure in this one is timber. The first metal that was used in the vans was aluminium window frames; the vans were subsequently built on aluminium frames.

The bloke he bought it from used it for keeping motorbike spares in but Frank brought it back to life with his then teenage daughter choosing the bright interior colours. They switched the power to dual pole powerpoints and it can run on a 12-volt battery or 240V. The fridge is run on mains when available, as Frank doesn’t like to use gas in his RVs. The original water tank has been removed but not replaced to save renewing all the seals and hand pump hardware that were worn out.

The windows are shielded by some great slide over mini awnings to keep the sun’s glare out of the interior but they allow in the breeze in the absence of aircon. The cover for the larger window on the front of the van also aids waterproofing with an improved seam on the top of the frame where water used to seep inside. There is a matching awning to slide along the side of the van too. The roof was originally protected by enamel impregnated canvas but is now treated with rubber based compound that’s used in sealing duck ponds and finished in heat reflective paint.

The smooth blue colour was chosen to match the two EK Holdens – this one was originally coral pink – that Frank and Helen own and the van’s wheel wells can be dressed with spats to match the other concourse Holden left at home on the day we met.

The EK’s original ‘grey’ 183ci six-cylinder engine that was “the slowest that Holden ever produced” has been swapped for a 350 Chev and an auto combo that produced a 14.1 sec quarter mile on the drag strip (without the caravan). 1967 HR Holden disc brakes take care of the stopping power, which Frank installed along with adding aircon.

To improve the turning circle Frank extended the drawbar by around eight-inches as well as the gooseneck on the car to avoid damaging the back of the precious Holden. The override brakes remain but Frank explains that he doesn’t extend to the level of authenticity that some members of a forum he and Helen belong (www.vintagecaravans.com) to do, to have every item period correct, down to the flat-head screws (no Philips). So we’d deem him an enthusiast rather than a purist.

Over in the orange corner we have Geoff and Della’s striking orange and silver combination with the 1946 Chevrolet and 1959 Baravan. They’ve had the van for eight years after winning it on eBay, bidding in the last nine seconds, for $1500. The seller said he’d deliver anywhere and duly travelled overnight from Melbourne to the top of NSW and delivered the van, in very original condition as promised. Original down to the tyres, but no spare, no lights, and wiring – all that was needed urgently was to re-skin the door and the roof hatch. The couple then stripped back the surfaces to paint and re-did the laminate during a five month period.

While Geoff and Della occasionally attend the events via vintagecaravans.com, they are more religious in attending hot rod rallies – religious in that they have certainly drunk the Kool Aid! The cars definitely came first and this Baravan replaced a 19-foot modern Jayco caravan to provide Geoff and Della with period accommodation while attending frequent weekend events – where all four also enjoy rock and roll dancing to complete the social aspect. As Della pointed out the emphasis is all about having fun and the vans certainly add that dimension.

Inside, the bright interior is complete with 1950s collectibles from food containers, cocktail beakers, to a Bush radio on the laminate table. Even the esky to go with the deckchairs is an original. Despite downsizing from the Jayco, the compact dimensions of the van are a comfy and well-used sleeper for Geoff and Della. It’s very cosy. This van is of the first year that the aforementioned aluminium windows were used, and is also resplendent with striped window covers.

The fridge is original but doesn’t run on gas anymore as it lacks a shut-off, in that if the flame goes out the gas keeps flowing. The van runs on 240V mains power.

The seats have been re-covered in keeping with the changing colour of the van. They were originally cream, then they became yellow although they’re bright enough to keep pace with the external orange that Geoff applied with a paint roller virtually there and then because someone commented that it didn’t match the Chevy.

Thought it’s impossible to pick now, the Chevy was an ex-Australian Army vehicle, in right-hand drive and still rides on the original chassis. Originally the 2.5-ton truck turned on large steel wheels and had a steel tray. The power now comes from a 308 Holden motor and the same origin gearbox, and with a 10-bolt diff. Geoff bought the incomplete project from a mate and applied the finishing touches. The colour scheme had already been done but the wiring and motor still had a few issues. Geoff’s part of the Gold Coast Street Rodders although the car collection runs through the family with Della owning an FE Holden
wagon and their son drives an EJ, also a wagon. And despite the lack of aircon or heating the Chev is a daily driver – it’s a reliable vehicle having covered 12,000km over the 16km on the clock when Geoff bought it.

There’s no disputing that these vehicles are part of a great get-together community. The lifestyle is about many facets. As well as the enjoying the vintage appearance and the rock and roll music and dancing it’s about travelling and a certain spirit, and that’s certainly music to our ears.