Thanks to local design and development work, Toyota says if the 2020 HiLux could talk it would have a strong Aussie accent.

Toyota Australia played a pivotal role in the design and development of the 2020 HiLux, which now comes with more power and torque, heavily revised styling and chassis tweaks aimed at improving ride and handling. In addition to improved output, Toyota says fuel economy is improved by up to 11.1 per cent thanks to engine upgrades which include a new common-rail injection system with a higher maximum fuel pressure (250MPa), the adoption of a larger turbocharger, a new combustion chamber design, a new exhaust manifold, a more efficient EGR (exhaust gas recirculation) system and a revised cooling system.

The HiLux’s maximum braked towing capacity now matches class competitors such as Ford Ranger at 3500kg across the range.

Check out this video for a summary of the changes (featuring our very own Wes Whitworth’s ‘strong Aussie Accent):

It’s little wonder Toyota Australia was entrusted with the upgrades to the 2020 HiLux – if you ever wondered how important the HiLux is to Toyota Australia, consider this: in the last eight years the latest-generation HiLux has sold 223,687 units in Australia, which equates to one-fifth of total Toyota sales in this country.

Toyota Australia’s design team worked extensively with its Toyota counterparts in Japan and Thailand on the HiLux’s new look, which is said to have transformed the styling to align it more closely with the global Toyota ute and truck family. The brief for the design team was to develop a simple and strong athletic pick-up truck “that was tough and genuine”.

“From the beginning, our sketches investigated bold and tough themes that centred on a larger, more vertical trapezoid grille enhanced by an upper bonnet moulding and lower bumper components that lock into the grille surround,” Toyota Australia’s manager, Product Design, Peter Elliott said. “The headlamps have been moved outboard and they now connect with the distinctly chiselled bumper corners, linking the design. We progressed through clay models and CAD, evolving the idea to be cohesive with the rest of the vehicle while maintaining maximum visual impact.

“The final design was milled as a full-size clay model and shipped to Japan, where it was well received as a bold step forward with a strong Toyota DNA.”

The HiLux’s revised 2.8-litre four-cylinder turbo-diesel engine now makes a claimed 150kW at 3400rpm and 500Nm from 1600-2800rpm, and Toyota says the local engineering team played a big part in the revisions to the driveline. In addition to higher peak power and torque outputs, the engine now has a wider and flatter torque curve that is claimed to have resulted in improved acceleration, overtaking and towing performance. 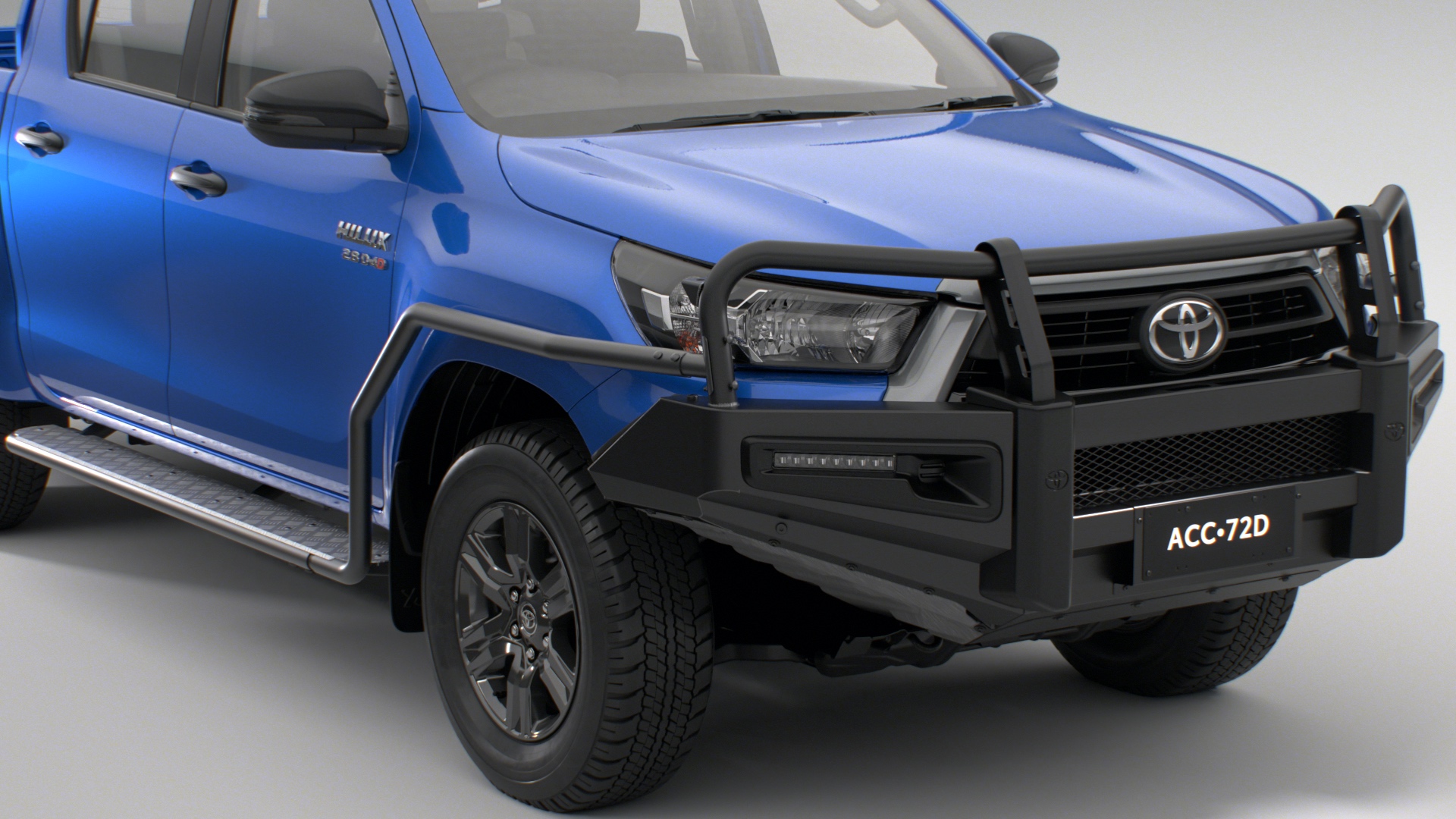 Steel Bull Bar with Side Step and Rail

The HiLux’s revised suspension tune was also developed and tested in Australia. “The ride comfort of the rear suspension has been noticeably improved when driving without a load. Importantly, the vehicle maintains the HiLux DNA of being able to carry heavy loads with excellent body control, both on sealed and dirt roads,” Ray Munday said.

“We also confirmed that HiLux maintains its acknowledged off-road traction with the combination of high wheel articulation and traction control systems which have previously been tuned in the real-world customer conditions of Australia.

“In addition, we adopted a variable flow control power-steering pump to provide a more direct steering feel on narrow winding country roads and to reduce steering effort when parking.”

“Importantly, we were able to confirm the cooling performance was maintained in every test we could throw at it – including uphill highway towing with an ambient temperature well over 40 degrees.

Although Toyota Australia no longer manufactures vehicles in Australia, it still has very active design and engineering teams here. Toyota Australia’s General Manager of Product Planning and Development Rod Ferguson said, “Being awarded this project was a real feather in the cap for our team – and a tribute to the level of design capability we have at Toyota Australia.

“I’m sure if HiLux could talk, it would definitely have a strong Aussie accent,” Ferguson said. The interior of the 2020 HiLux has also copped a spruce-up, with an upgraded multimedia system with a new 8-inch display sporting tuning and volume knobs, and Apple CarPlay/Android Auto connectivity. The SR5 grade also gets sat-nav and digital radio.

HiLux 4×4 SR double-cab pick-ups can be ordered with a $2000 option pack that includes 17-inch alloy wheels, sat-nav and digital radio. A $2500 option for 4×4 SR5 double cabs adds leather-accented seats and door trim, and heated front seats with 8-way power adjustment for the driver and 4-way manual adjustment for the passenger. 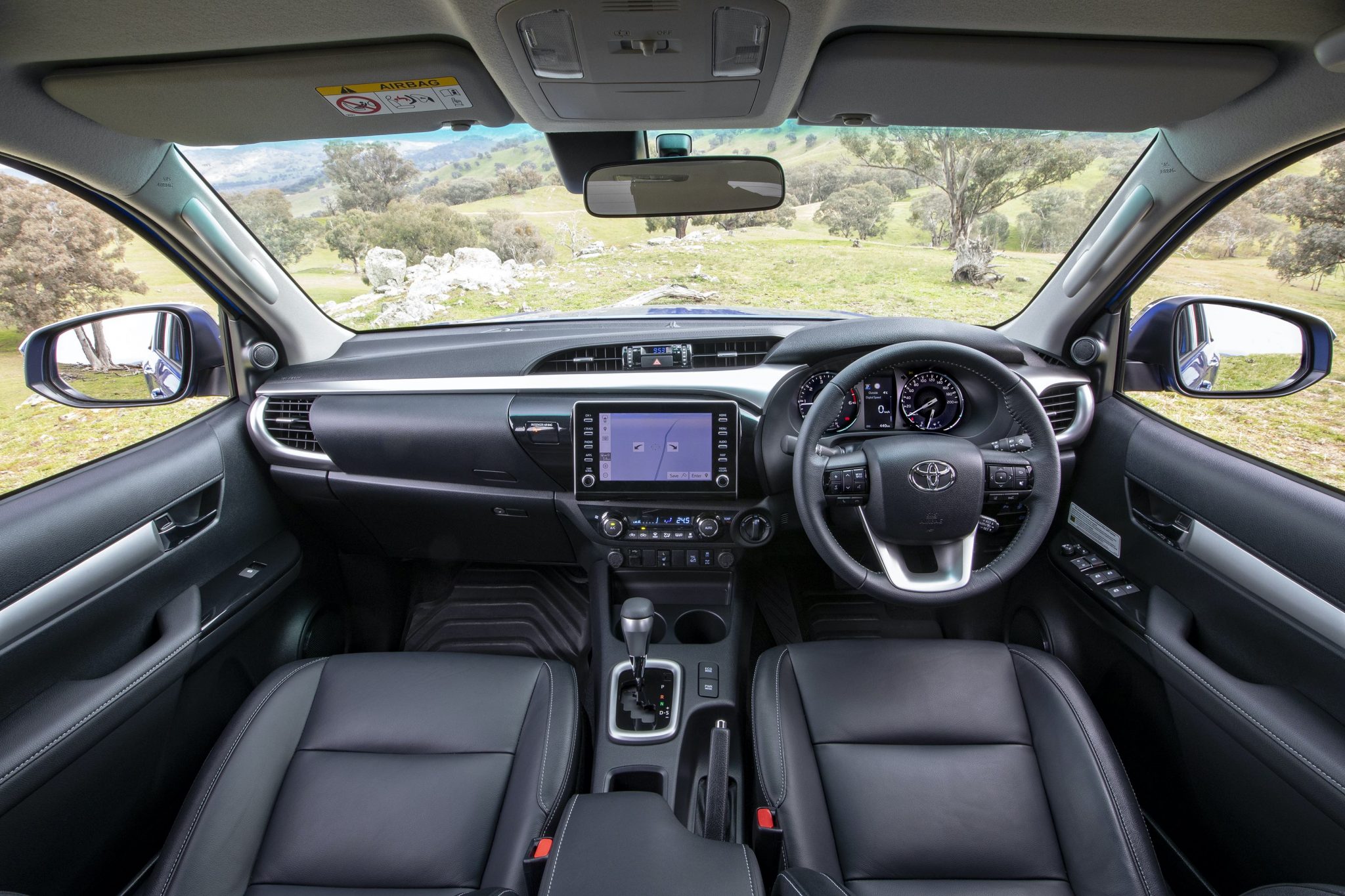 Toyota Australia says it has invested more than $10 million in the design, engineering and prototyping of more than 60 new Toyota Genuine accessories to suit the new 2020 HiLux and Fortuner models. Standouts include a new lockable trundle drawer for factory trays, a new tub liner with rail capping, 18-inch alloy wheels and a rear chassis-mounted integrated step for easier ute-tub access.

Toyota Australia also had to redesign accessories such as bullbars, nudge bars, towbars and a hard tonneau cover to work in with the new exterior styling of 2020 HiLux.

Toyota says all Genuine Accessories are covered by a full warranty.

Toyota says the top-spec HiLux Rogue and HiLux Rugged X details and pricing will be announced in the not-too-distant future, and we’ll be testing these variants as soon as we can get our hands on them.

We’ll be testing various other models in the revised 2020 HiLux range starting from next week, so let us know in the comments section if you want us to look at anything specific on the new HiLux.