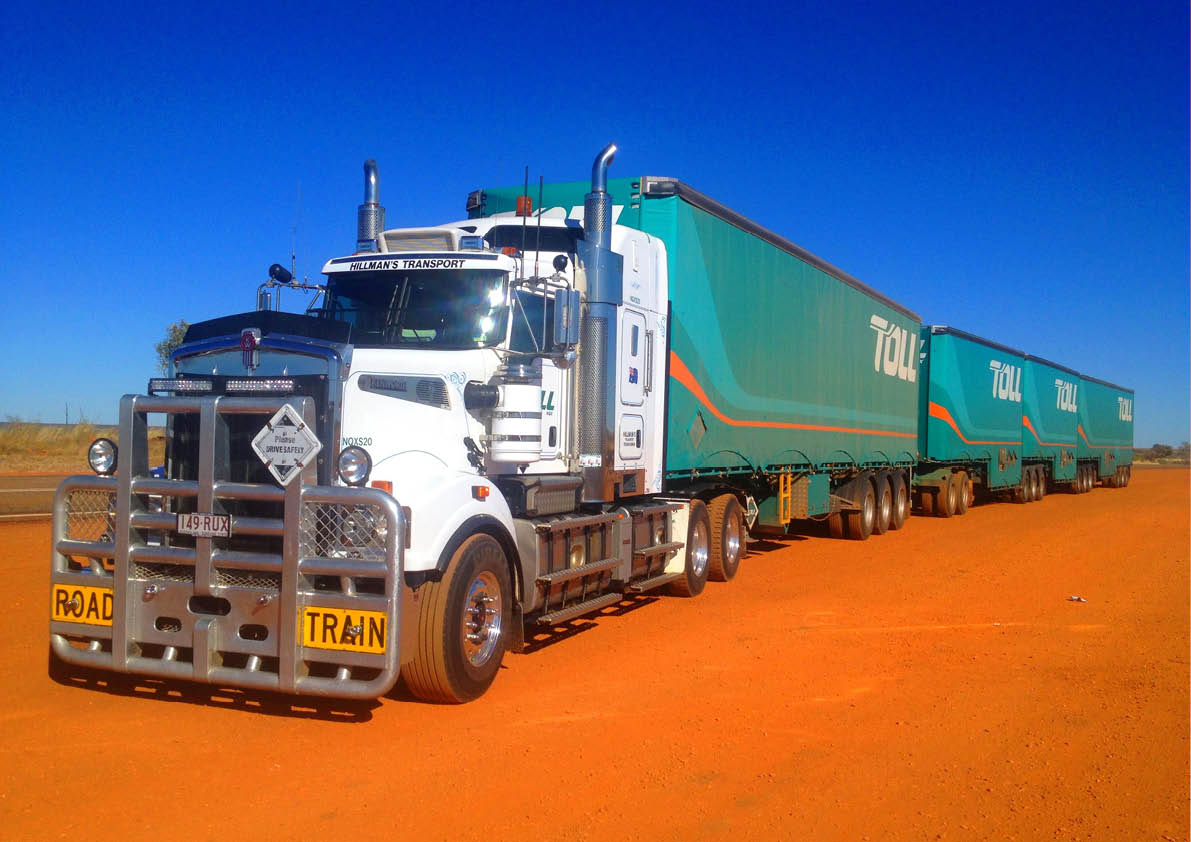 … Over parking, radios and speed. Put the Blunnie on the other foot!
By Bruce Honeywill

We’re sitting at a table in an outback Queensland café. Four of us, all hi-viz shirts and tired eyes. Truck drivers, well more than that, road train operators. Two of us just finished a 14- hour, 1200 kilometre run, the other two fresh and ready to start their stint. The conversation is about caravans or more particularly caravan drivers.

Derogatory terms float across the heart-attack-inducing breakfast. ‘Scourge of the road’ was one of the kinder terms. We’ve got nothing against other road users, plenty of room on the nation’s arterial roads. We’re not indulging in some tribal feud over territorial rights.

So how did this antipathy between long-haul truck drivers and caravanners develop?

Charlie Keene is talking while we set about bacon, eggs and snags. A 14-hour shift and crossing a fair chunk of the nation builds an appetite. “It was about three in the morning,” says Charlie, “I was stuffed, tired. Between Kynuna and Winton and I needed 20 minutes stretched out, that’s all you need to freshen up.”

There are three or four truck parking bays in the 160km stretch between the two outback towns. A 53.5 metre 130 tonne four-trailer road train can’t just pull up anywhere, the big trucks need the correctly designed pullouts.

“The pullout 20km south of Kynuna was full of caravans, I slowed but the last caravans were parked sideways across the entrance. I got up to road speed again but was feeling pretty bloody wobbly. The next one was packed with caravans. I pulled up on the road with hazard lights going and ran around the truck, jumped up and down on the spot. Kept driving and eventually got my rest at Winton.” Charlie reckons he was operating at about 25 percent of his driving capability for the want of 20 minutes shut-eye, all because the caravans being parked up without understanding the needs other road users.

Some call them corellas, the white and shiny vans that come to roost in the late afternoon sun of the outback, in the way the parrots noisily roost in trees at sunset. The parking bays of Queensland’s outback highways are multiple use and trucks need them 24/7. If caravanners are annoyed by roaring refrigerated van motors, the diesel-powered Icepacks that air-condition the truck cab, the stamping, rattling and calling of cattle on livestock road trains (try 150 head of cattle in one road train 10 metres from a caravan) perhaps a paid site at a nearby town is a better option.

Lindsay Davies drives a big Western Star out of the Northern Territory town of Katherine. He pulls a low-loader or float, used for hauling heavy machinery, usually in a wide load configuration. He’s a patient bloke, and as he can only drive during daylight hours usually with an escort, he parks up near towns and doesn’t have the parking bay issue that truckies who drive through the night sometimes have. “It’s their use of the radio,” Lindsay reckons, “Channel 40 is for serious use. The escort driver needs the channel to tell approaching traffic that a wide load is coming and you’ll get a couple of old mates in vans chatting about how to best cook the barra tonight or the price of fuel at Dunmarra.”

No one is suggesting that all truckies use Channel 40 with respect, particularly on the coastal runs. All road users including truck drivers and caravanners could follow the practice of dropping to another, less used, channel for a chat. “And caravanners could use the radio to let me know when they want to pass so I can give them room. We don’t bite,” Lindsay said.

Another bone of contention with truck drivers is the difference between training and licencing. A truck driver must go through a complex and staged licence process, usually has to do dangerous goods update courses every two years, must have medical checks regularly as part of the dangerous goods regime. A caravan driver can spend a lifetime in the city driving a small automatic urban sedan and with retirement, purchase a two-to-three tonne four-wheel drive and hook up to 30 feet of home-away-from-home and set out on the great adventure without any training or licencing provisions. And, according to the truck drivers spoken to for this piece, this inexperience often shows.

There is no suggestion here that truck drivers are angels, they are just ordinary people with the usual wide social diversity. We all have the horror story of a speed or tailgating truck and there is no excuse for this behaviour. However, statistically, accidents involving trucks on a per kilometre driven basis is way lower than the national average for motor vehicle accidents.

The final issue identified that is causing the rift of outlook between truck operators and caravanners is speed. Many of the big road trains on outback roads have a maximum speed of 90km/h (many legally run at 100km/h in the NT). A caravan driver too might choose 90km/h as a suitable speed. However, 90km/h set on a car’s cruise control is probably only 86km/h in real terms, this is the way car manufacturers set the speedometer. A truck on the other hand would likely have a maximum speed set at a true 90km/h. A five kilometres an hour differential means an extra hour in a truck driver’s shift. The extra time could make the journey illegal under fatigue management. And a road train cannot always pass a caravan safely when there is a small speed differential.

The answer? Find a sweet spot in the mid-nineties that gives efficiency and there will be days on outback roads that you never see a truck going in the same direction as you because you are running with the flow of traffic that spreads out along the highways and byways in a daily migration. The alternative is to slow to 80km/h and give the road to other vehicles when they attempt to pass.

This feature is not an attempt to denigrate caravanners, rather showing attitudes from a truck driver’s perspective. By far most truck drivers and caravanners get about their daily business of travel in harmony and mutual respect but it often pays to have a thought about those men and women in the big trucks doing a tough job often in 14-hour legal shifts. Mutual respect goes a long way to increase safety on our roads.