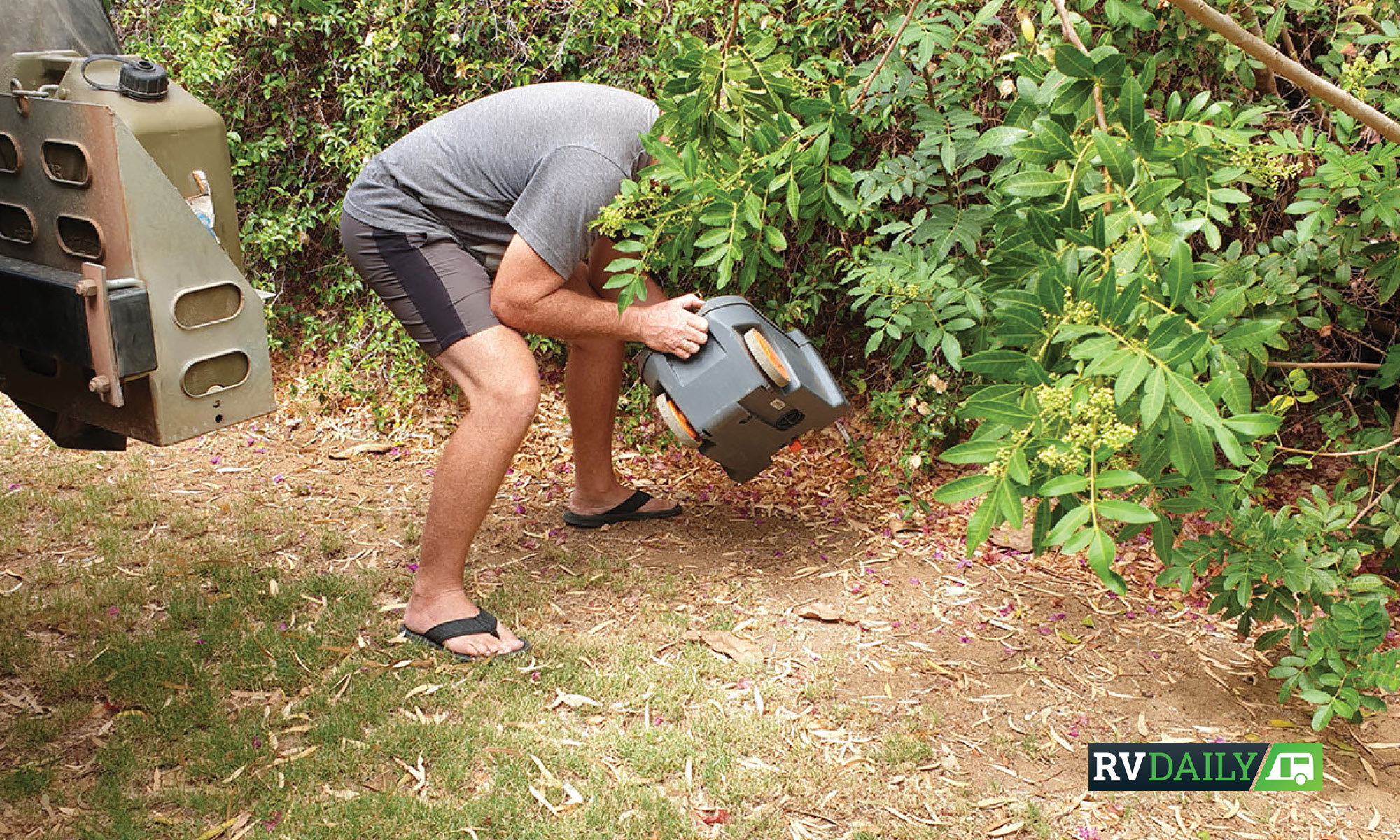 The untold stories of the appalling behaviour by some in the caravanning community will make your toes curl. Caravan park managers spill the beans on caravanners behaving badly!

I don’t know about you, but I like to think my wife and I are good caravanners. We are courteous to other road users, we try to help out others whenever we can and, when we visit a caravan park, we obey the rules and show some appreciation for the maintenance staff and the park managers. I’m pretty sure that most of you out there reading this will feel much the same. Our behaviour should be a good example for others. Unfortunately, there is an element of us out there who do not share the same values. Caravanners behaving badly. They seem to go through life with little care or consideration to others and it is the caravan park managers and their staff who are left to deal with the aftermath. These are their stories.

While we were staying at Streaky Bay Islands caravan park, a couple pulled up at the check-in office in their rather clapped-out minibus and a trailer filled with an assortment of oddities. They explained to the manager that they were after a site for a couple of months but, being a little low on funds, they asked if they could pay their site fees every two weeks in arrears. Being thoughtful and understanding of the couple’s predicament, the manager agreed and they were allotted a site.

Problems started to emerge when the contents of the trailer were sprawled all over the site. Being Christmas, the park was near capacity and the mess was causing a bit of a stir. The couple, who had still not paid any fees, were kindly asked to relocate to another site where their mess would be less intrusive.  Four weeks passed and still no sign of payment from the couple so the manager presented the female with an invoice as a not so subtle reminder of the outstanding fees. This sent the woman into an absolute rage. The screams of profanities would have made an interstate truck driver blush. When she took a swing at the manager, her patience had run out and the police were called to deal with the woman’s behaviour. When the cops arrived, they were not spared the verbal abuse.  Fortunately, the threats of arrest were sufficient to have the couple pack their rig and leave but not before they pinched all the contents of the shared fridge in the camp kitchen. Later it was discovered they had also left a few ‘surprises’ in the rubbish for the managers to find the next morning.

Our friends who, are experienced park managers, were travelling to a new job in Western Australia. Along the way, they stopped at a free camp where they met a group of grey nomads. Later in the day, an invitation to happy hour was offered to our park manager friends. The group seemed friendly enough so they accepted their invitation. When the time arrived, they went over to the group to join in the action. After a few drinks, the various members of the group started to reveal an assortment of items wrapped up in beach towels. These included showerheads, tap fittings and other bathroom hardware. It turns out these were “acquired” from previous visits to caravan parks. Items were exchanged by the members of the group to the horror of our friends. It was clear they had become the unwilling participants in a geriatric swap meet of stolen goods.

You would have to wonder why such a sign was necessary

Our same friends later arrived at their new job. It was a small caravan park on the WA coast. The park had run into some disrepair, particularly the amenities block, so our friends quickly set about improving the facilities. They replaced all the worn-out shower curtains and placed new shower mats, toilet roll holders and toilet brushes to complete the refresh. After a few weeks, they started noticing items were disappearing. Yes, dear readers. Visitors to the park had been pinching all the new items including the toilet brushes! Now, we all know that times can be tough, but how desperate do you have to be to pinch a used toilet brush? The mind boggles at such behaviour.

There’s no question that some of the tourists from overseas travelling around the country in their Juicy vans are doing the trip on a stretched budget. It is quite understandable that they will do almost anything to save a penny here and there, but one particular fellow took it a step too far. Our park manager friends caught the young man leaving the toilet block with a wooden roll attached to a battery drill that he used to extract the entire contents of the commercial toilet paper dispensers. If that wasn’t bad enough, he also emptied the contents of all the liquid soap dispensers into a large mug. I’m sure you will agree he rightly deserved being evicted from the park, but he wasn’t happy with the decision. Just before he left, he paid one final visit to the toilets. This time he refilled one of the empty soap dispensers with handfuls of his own faeces. Charming fellow. 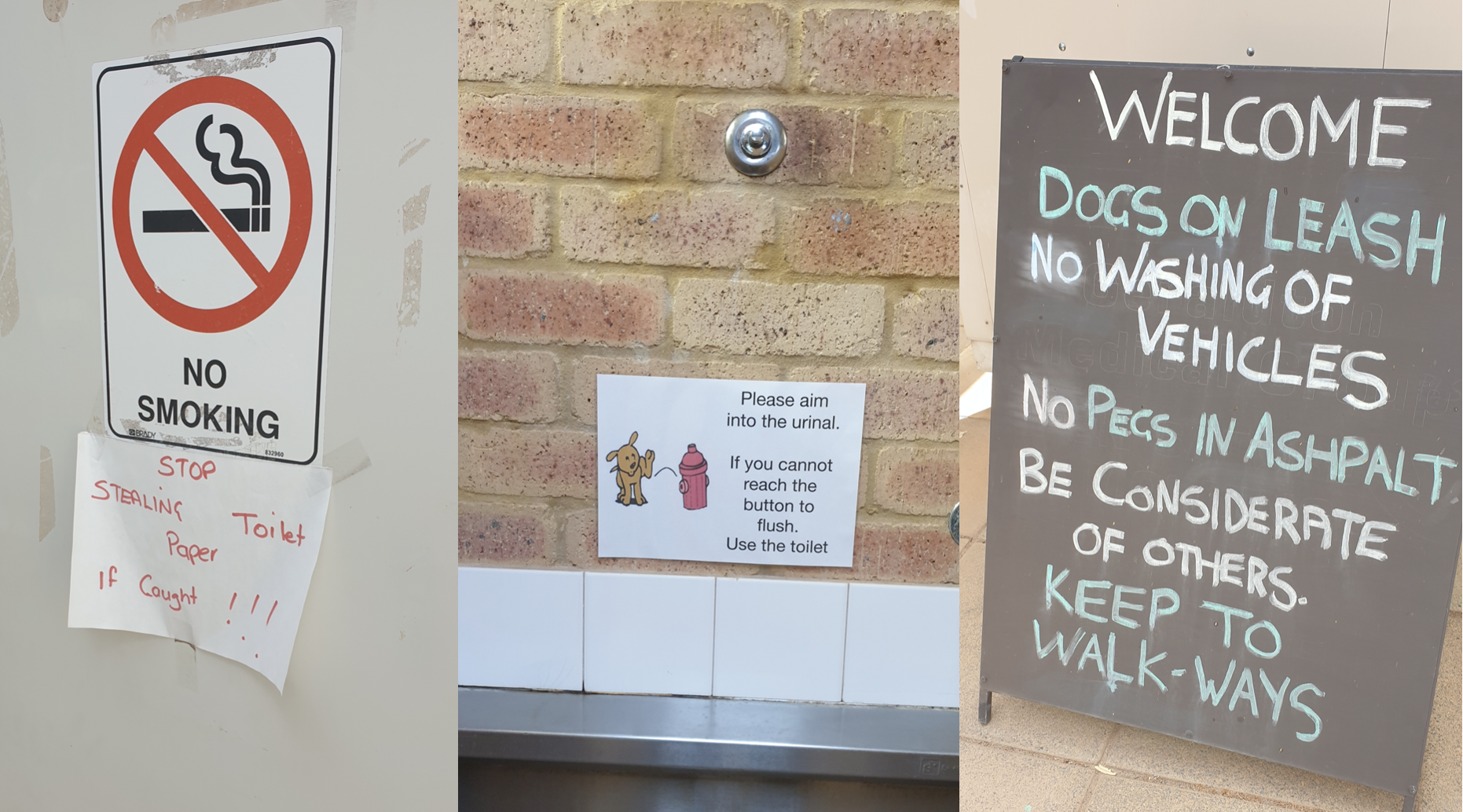 There should be no need for these signs

A couple of years ago, we were staying at a delightful caravan park on the NSW central coast. Upon our arrival, we were advised by the manager that they were doing improvement works to park’s electrical and plumbing systems and that there may be times when services would be out for short periods. Of course, this was no trouble for us but, for one particular couple, it did cause some inconvenience.

On the morning of their departure, the woman was having a shower before leaving. Now check-out time was 10am and she was in the shower at 10.30. Normally this would be too much of an issue but, by complete accident, one of the workmen cut the power to the whole park, turning off the water pumps that supplied water to the showers. Well, our lady friend was caught with shampoo through her hair and, let me tell you, she was not impressed. Nor was her husband, who proceeded to let the manager know his thoughts on the matter in no uncertain terms. In fact, the whole park was treated to his rage and no amount of apologies expressed by the park manager could appease the gentleman. Later that day, a not-so-kind review of the park appeared on Trip Advisor.

Next Time Make a Booking

Our final tale happened not too long ago. We were camped at a popular caravan park on the WA coast and, due to the recently lifted COVID-19 travel restrictions in that state, the region was enjoying a surge in holidaymakers. So much so that all the caravan parks along the WA coast were at capacity. This meant that if you did not have a booking, you were likely to be sent to the overflow where the facilities were non-existent but, at least, you had somewhere to stay for the night.

One morning I was walking our dogs and I met one of the maintenance guys doing his rounds. I asked him how his morning was shaping up and he dropped his head and replied; “not so great”. You see, all the toilets were closed after someone entered the park in the early hours of the morning and shoved rolls of toilet paper into the S bends of all the toilets. Every single one was sabotaged. They had done such a good job that some toilets had to be dismantled to free up the blockages. Since access to the amenities blocks required a key, the deed had to be done by a park resident. The culprit was thought to be one resident who, the day before, expressed his dissatisfaction with being sent to the overflow section of the park. He had left before his bad behaviour could be addressed. 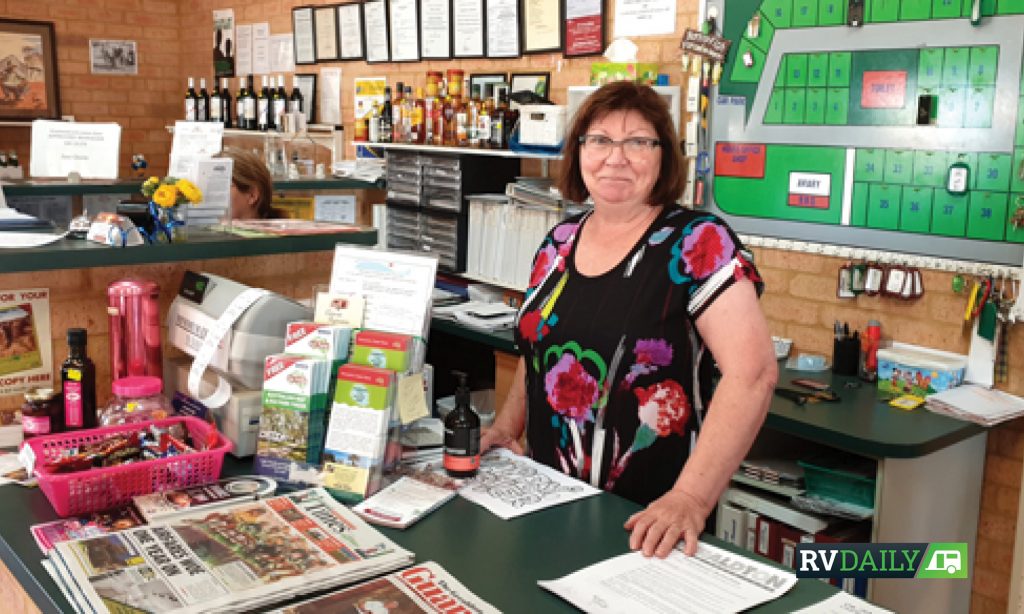 Caravan park managers have to put up with a lot. Be nice to them

These are but a few of the horror stories we’ve been told by our caravan park manager friends.  They have to put up with a lot at the best of times but occasionally, they do have to deal with the lower end of the travelling community.  So the next time you visit a caravan park, remember the park managers and their staff work extremely hard to make your stay as comfortable as possible.  I’m sure they would appreciate a simple thank you for their efforts and try to be on your best behaviour.

Read Next: Idiot Caravan Drivers. Don’t Be That Guy