A Weekend Away: Echuca 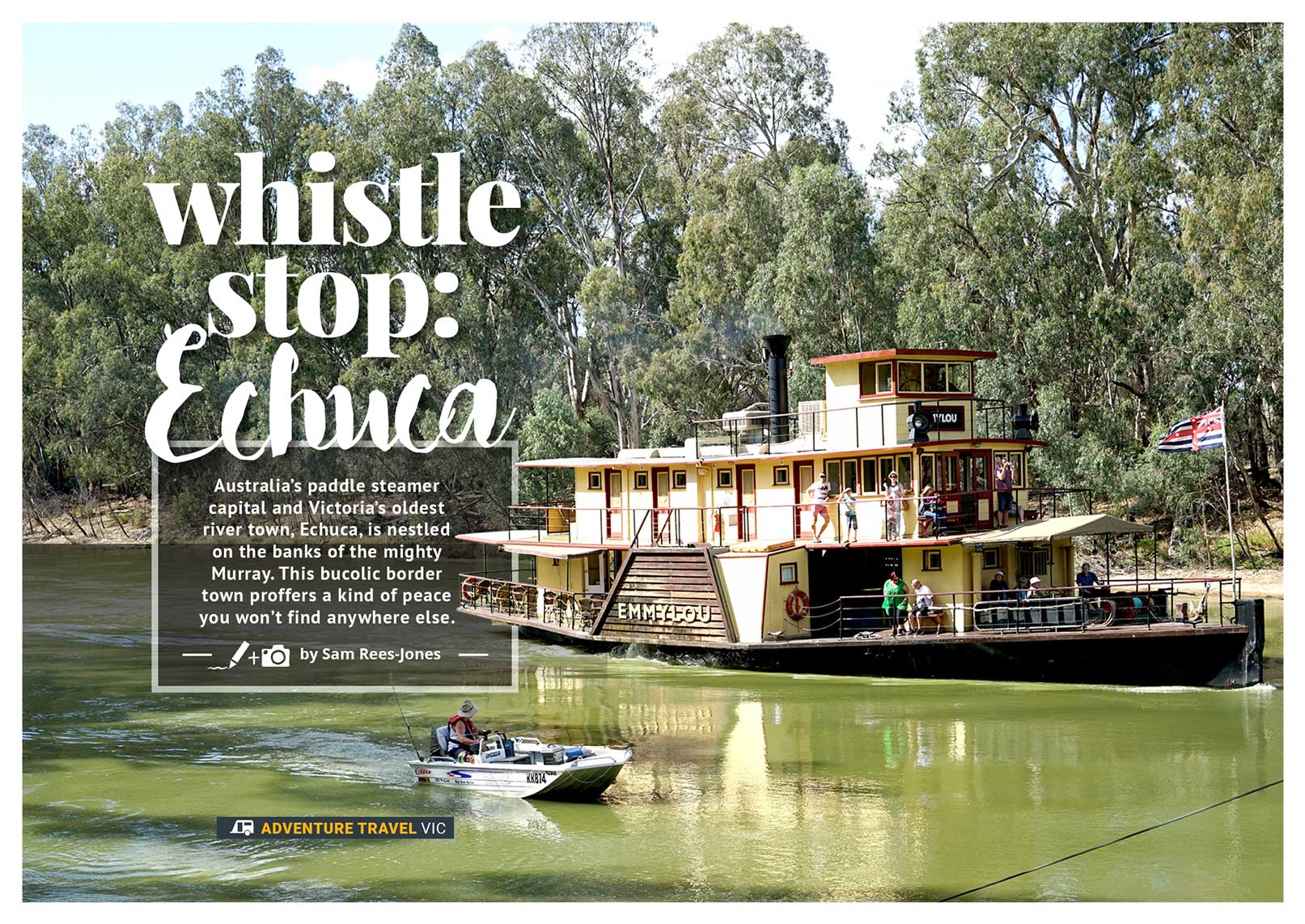 Australia’s paddle steamer capital and Victoria’s oldest river town, Echuca, is nestled on the banks of the mighty Murray. This bucolic border town proffers a kind of peace you won’t find anywhere else.

True to Australian history, Echuca and its twin town Moama were founded by ex-convicts. In 1845 cattle dealer James Maiden built a punt on the northern side of the river and in 1851, the area was named Moama. A few years later, Henry Hopwood, who was convicted for receiving stolen silk and sentenced to 14 years ‘transportation’, arrived on the southern side of the Murray in 1850 and set up a rival punt. Hopwood built a hotel in 1853, and a year later, his side was named Echuca. The Aboriginal name meaning “meeting of the waters” reflects the meeting of the Goulburn and Campaspe rivers joining the Murray, and where the Echuca township sits.

Unfortunately, the depression ended Echuca’s position as an economic centre and the population decreased, but the whistles of the restored paddle steamers still fill the air as they travel in and out of the old port precinct.

The minute we drove through the main street we knew that the bygone era was not lost in this eclectic town; modern shops in historic buildings have kept the 19th century feel with authentic street lighting and replica shop signage. Wandering along the historic High Street and the Murray Esplanade, I felt like I was taken back to the 1800s. It was intriguing to learn about the history of the two towns in the Discovery Centre and experience what Echuca was like during the early settlement times.

I experienced life before sliced bread and instant coffee while spending some time walking through the demonstrations of the Wood Turners, Whistle shop, Blacksmith’s and Sharp’s Magic Movie House and Penny Arcade. As interesting as it was, I am not too sure if I could live without my WiFi and digital devices!

We got some quirky photos to post back to friends and family after dressing up in vintage clothing at the photography studio, and I was astounded by how much I resembled my grandmother! It made me appreciate the simplicity of our modern fashions as the clothes were so restrictive and heavy.

This rural town is incredibly charming, but it is not all about shopping here; its modern and heritage buildings, wharf and scenic river offer a town open to exploration on foot or bicycle.

There are plenty of fabulous coffee shops to stop in and savour a quality cup of Java as well as restaurants to satisfy every taste. I couldn’t resist the enticing aroma filling the street and ducked into the Beechworth Bakery where we ordered a muffin (or three), sat outside and watched the morning unfold as we planned the next few days.

Echuca’s claim to fame is that it is home to the largest paddle steamer collection in the world, so you can’t come here and not take a paddle steamer ride – they’re worth every cent. We packed a picnic, sat on the foredeck of the PS Pevensey and munched lunch as we cruised down the river, listening to the slow thump thump and gentle splash from the steamer wheels as they revolved in the water and powered the massive vessel downstream. Watching flocks of noisy cockatoos swoop down as the ship whistles blew is certainly a relaxing way to spend the afternoon.

It’s the perfect way to enjoy breathtaking riverscapes and learn about the history and significance of this picturesque area. The captains on the steamers are incredibly informative about the area and as we travelled along the river they told us all the historic facts that made this place what it is today.

Thirty kilometres north of Echuca is Barmah State Forest, the largest Red Gum forest in the world.  Here you’ll find several lakes, wetlands and sand hills. The forest is classified as an Important Bird Area because of its importance to the endangered Superb Parrot. There are plenty of other birds for you to spot, including the Yellow-billed Spoonbill, Nankeen Night Heron and Australian White Ibis. Stay the night at one of the many campsites available in the Barmah Forest – just remember it is a national park so no pets allowed.

There are plenty of caravan parks and campsites in Echuca and across the river in Moama, and it’s best to book ahead as the sites fill up very quickly during summer and the holidays. We stayed at the Echuca Holiday Park, which is walking distance to the town centre so we could leave the motorhome behind and explore on foot.

I will always remember my time on the Murray as a peaceful and beautiful experience, and recommend a journey to Echuca and Moama be added to everyone’s to-do list.