Marty reckons he’s had a eureka moment about solar power. Generous bloke he is for sharing it with you.

Hands up if you’ve had difficulty with your RV batteries keeping up with your power demands despite having a good solar set-up. I feel your pain. Over the years I’ve had several different 12V installations that included solar charging and they have all let me down in one way or another.

CLICK HERE TO READ THIS GUIDE IN OUR ONLINE MAGAZINE

As we travel around this country, talking to other caravanners, they all share similar experiences. For whatever reason, their solar charging systems just can’t keep up with the drain on their batteries. After considering this issue and experimenting a little, I reckon I’ve figured out why and the bad news is, we’ve all made a huge mistake with our solar installations. 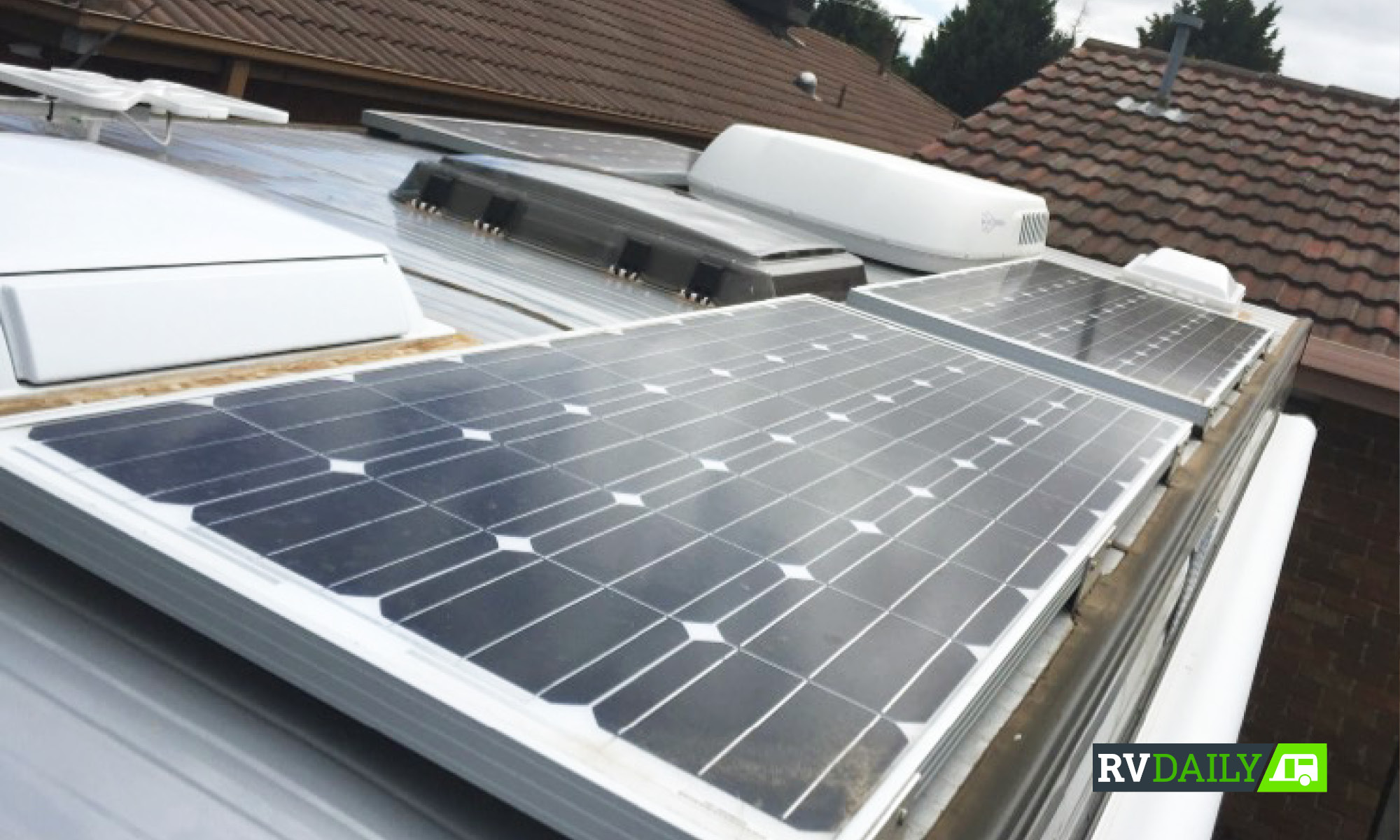 Our caravan has three 150-watt solar panels on the roof giving a total of 450 watts. Unless the sun is directly overhead of the van, they will never produce anything like this sort of power

Firstly, let’s understand that solar power generation is not all that efficient. At best, modern solar panels will convert about 20 percent of the available energy falling on them into electrical power. To achieve even that low level of efficiency, the panels need to operate in perfect conditions with sunlight falling directly on them from an angle of 90°.

Most new caravans, motorhomes and, to some extent, campers, have solar panels mounted on the roof or other flat surface. This is a very convenient way to transport and use solar panels, but it doesn’t help them to face directly into the sun at all times. In Australia, depending on the time of year, the sun will be at a less than ideal angle to the surface of our solar panels and we would be lucky to achieve 14 percent efficiency.

So, you might wonder, how does this translate into real world experience? Our particular caravan has 450 watts of solar panels mounted on the roof and, in perfect conditions, can theoretically output up to 30 amps. They never do and here’s why. On a typical overcast day, the roof-mounted solar panels would be lucky to be producing around 20 percent of their maximum output

We recently upgraded our solar charger to a Redarc BMS 1230S Battery Manager. This clever Australian-designed and built device can tell you a lot about what’s happening with your 12V system and that includes how many watts your solar panels are actually producing. In winter, in the southern states, even in full sunlight, our 450W panels were lucky to produce 230 watts. That’s around half of what they are rated at and it translates into just 15 amps of charge. 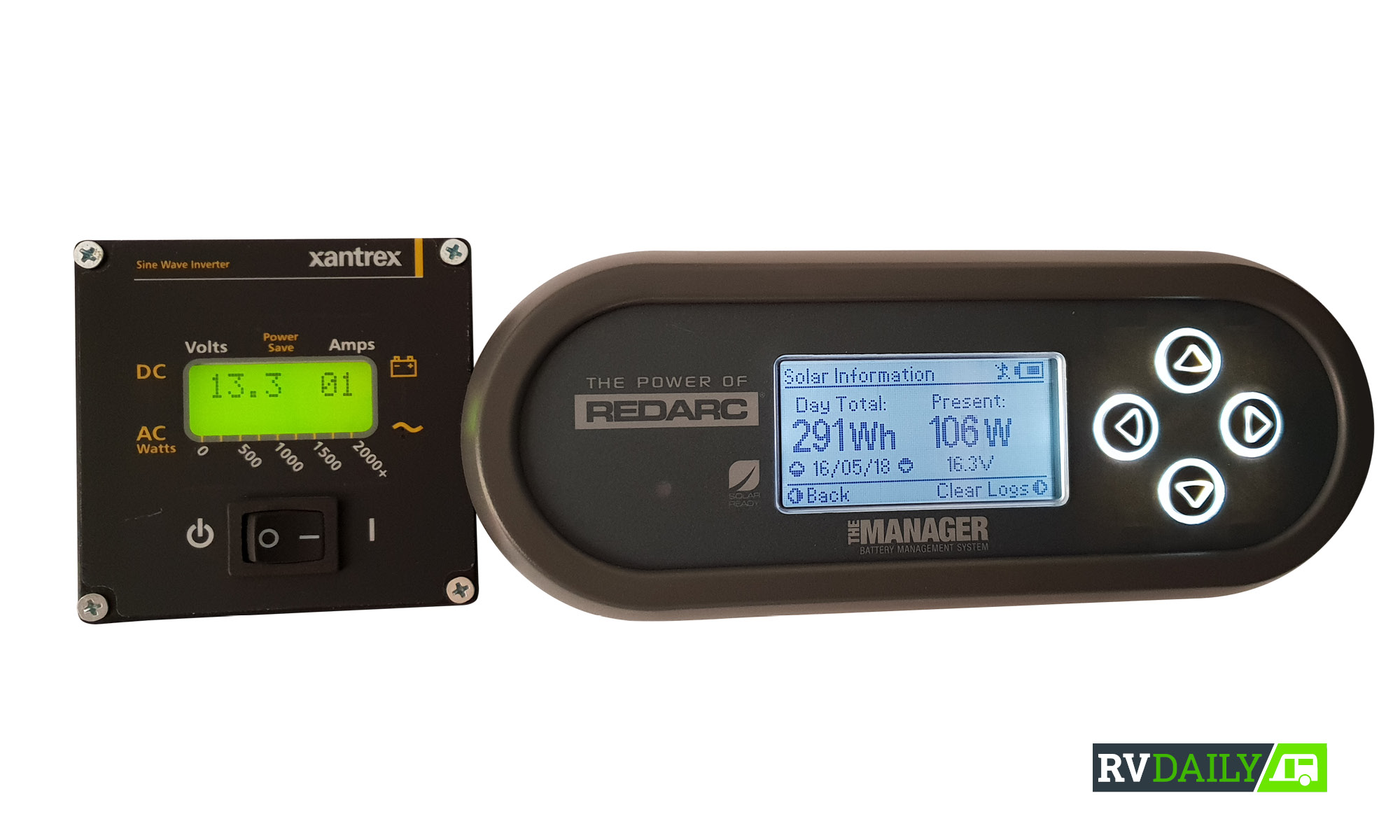 Now consider we are using power at the same time as we are charging. Accessories like the fridge, TV, DVD player, phone chargers, all take power from the battery even when it’s being charged. As a result, we could be putting less than a net of 10 amps of charge per hour back into our batteries. Introduce some cloud cover or shadows falling onto the panels and we can get down as low as just five amps net charging at any one time during the day.

Five amps is not a lot when charging 200Ah of AGM batteries. In winter, we might get six hours of daylight but only four of those hours, between 11am and 2am, would the sun be at an angle that comes close to ideal for producing useful power. Conservatively, we might get a total of 20 amp hours of charge over the entire day.

The final nail in the coffin is that we rarely park our caravan in open sunlight. Usually we are camped under trees or in a valley. Even a slight shadow cast by a roof-mounted air conditioner over part of the solar panel can cut its output in half or more.

The reality is that with all these variables taken into consideration, we would realistically be getting just 10-15 amp hours of net charge per day and this is simply not enough. Take out the power we use during the night and it’s little wonder our batteries would barely last a whole weekend without some form of additional charging.

Fortunately, all is not lost. There is one very simple thing you can do that will dramatically increase your ability to recharge your batteries. mains battery charger, solar regulator/charger and main batteryWhen our van was built, we asked the manufacturer to include a separate Anderson plug that was wired into the existing solar panels. This allows us to plug in an external solar panel(s) that can be placed in direct sunlight to augment the roof-mounted panels. Using the Redarc BMS to monitor our solar watts, we plugged in an external 100W panel in full winter sunlight. Immediately our available solar jumped by an additional 80 watts! Now that’s about as good as it gets with modern solar panels. By continuously repositioning this panel to be in as near direct sunlight as possible over the available sunlight hours, we were able to add around 20 amp hours to our total charge for the day.

A similar effect can be achieved by plugging an external solar panel into the Anderson plug of your trailer that takes charge from the tow vehicle’s alternator. Just make sure the panel has an inbuilt regulator if the connection goes directly to your battery. If you have a DC-DC charger or similar,
then an unregulated panel will suffice.

I’ll admit repositioning the panel all day is a bit of a chore and not always possible but it goes to show that adding solar panels external to your roof-mounted panels can lead to a dramatic improvement in your ability to recharge your batteries every day.

The key to understanding your 12V electrical system is to know one very simple equation.

This is how we know how many amps of charge we can expect from any solar panel. A 100W solar panel divided by 12 volts equals 8.3 amps. However, an unregulated 12V solar panel can output up to 22 volts in full sun. This is why we need a regulator, or solar charger, to reduce these high voltages to a level that our 12V batteries can accept. This will result in higher charging amps but 12V DC is prone to voltage drops and other inefficiencies in the system, and trying to work out the variances in the resultant output is extremely difficult. To keep it simple and conservative, it’s better to use 15 volts as a baseline when determining time to recharge from solar.

It’s important to understand that electrical charging and discharging happens over time. This is why batteries are rated in amp hours. It gives us the ability to estimate how long a battery will last. If we apply a constant load of one amp to a typical 100Ah battery, that battery will be fully discharged in 100 hours. However, most 12V RV batteries don’t like to be discharged below 50 percent of their state of charge (SOC). With that in mind, our 100Ah battery with a constant load of one amp can be run for 50 hours before we start to damage the battery. 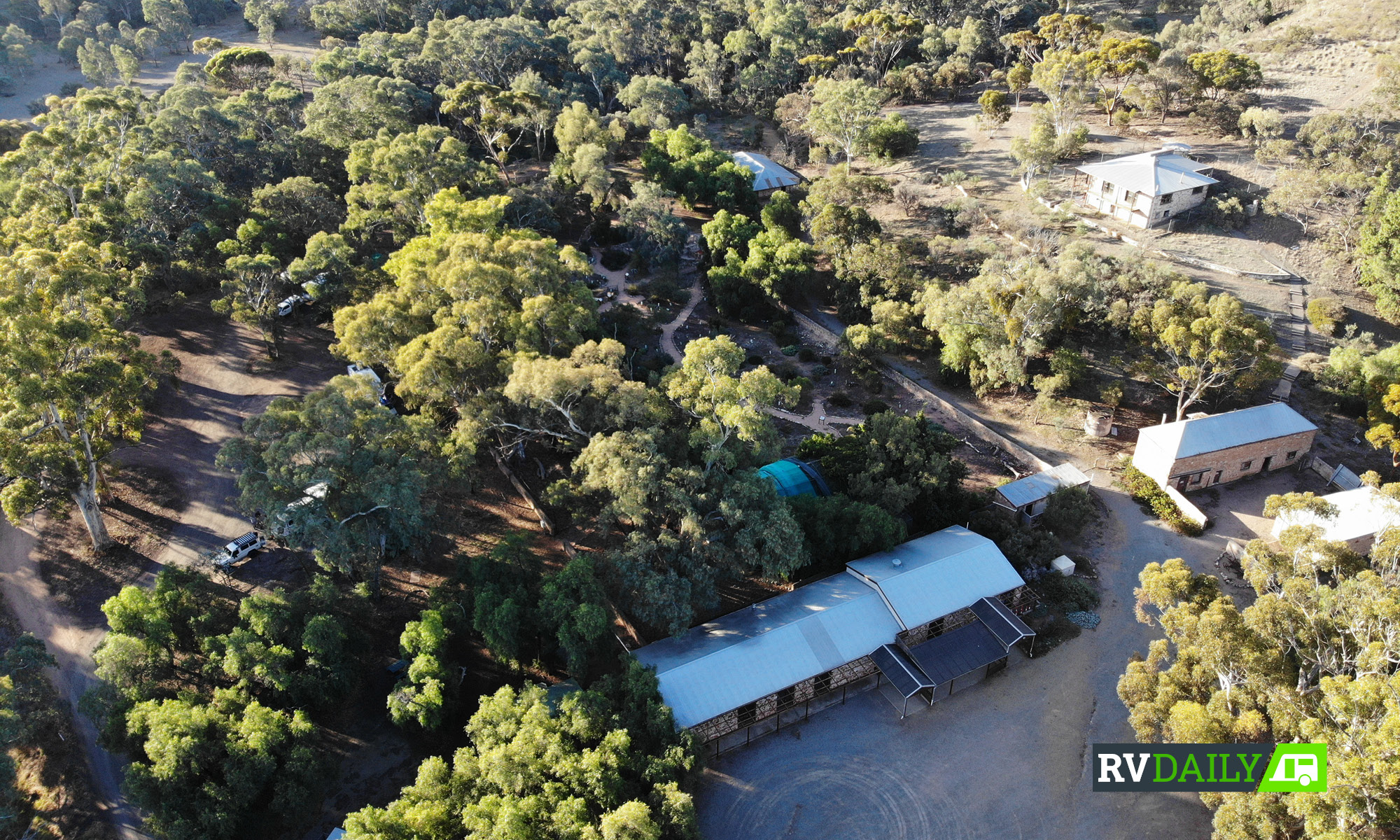 The aerial view of this campground tells a story. The trees will block a great percentage of the sunlight during the day severely limiting recharging ability. Stay here for a couple of days and you’ll be pulling out the generator sooner than you think

The exception is lithium batteries, which have the ability to discharge to very low levels without sustaining long-term damage.

Back to our example, if we discharge our 100 Ah battery to 50 percent SOC, it will require 50 amp hours to recharge completely. A 100W panel producing 6.6 amps per hour (measured using 15 volts) will theoretically recharge this battery in approximately eight hours but only if the original load has been turned off and if the panel is operating in near perfect conditions. In reality, it will take around 60 percent longer due to the inefficiencies on most batteries and the way most solar controllers have what is called an “absorption final stage” in their recharging profile. This is necessary as a battery’s ability to accept charging current will decrease as it gets closer to reaching full charge.

If the panel is mounted on the roof of a caravan and is operating during the winter months in southern Australia, it could easily take three days or more to fully recharge that battery. If a load is connected at the same time, such as a 12V compressor fridge, it will take even longer.